This Hernando couple is carrying on a family tradition and forging new memories with family, food, and friends 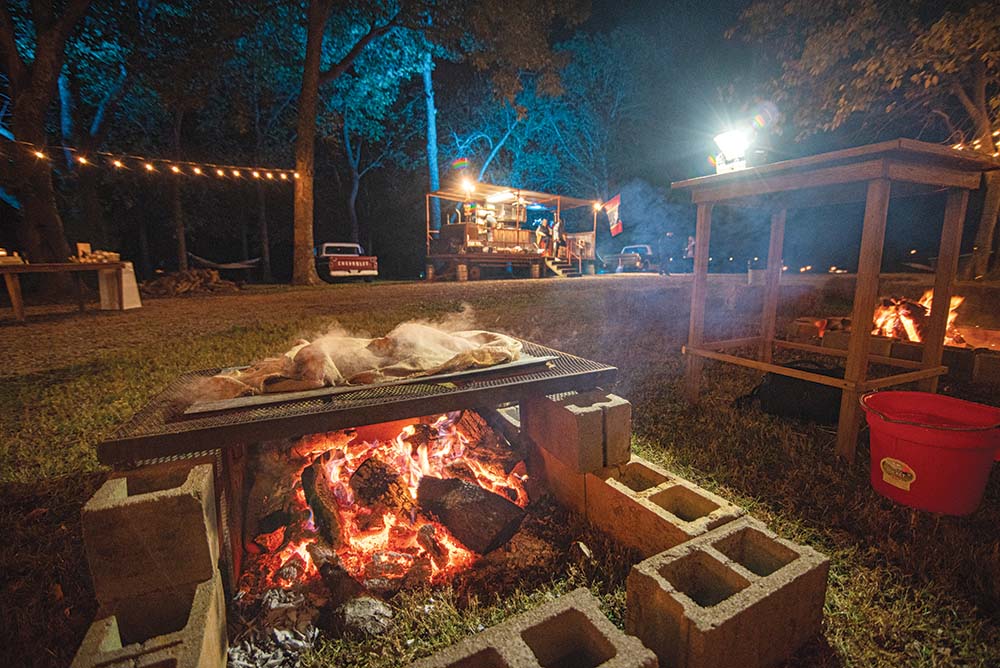 When Natalie and Josh Lynch and their two boys bought their country-in-the-city home in 2013, they knew they would make it a welcome gathering place for family and friends. Giant hardwoods cover the expansive front and back yard. A rustic old storage shed lends its character, and the setting is a natural venue even before the preparation begins.

Josh, one of three sons, and Natalie, one of three daughters, blend their his-and-her styles as hosts to an annual oyster roast. It is both classy and comfortable—a cross between a guys’ hunting camp, the Grove, and the best of Southern hospitality.

Josh’s parents, Kay and Gary Lynch, learned about roasting oysters years ago after close friends Tom and Alice Anne Sander, South Carolina natives, introduced them to their Lowcountry tradition. The men worked together at Smith and Nephew, an international medical equipment manufacturing company in Memphis. New job opportunities meant the couples eventually moved apart, but they maintained their friendship and love for oyster roasts!

Josh and his brothers, Adam and Noah, built great memories over the years with occasional family oyster roasts in their backyard. The oysters were delicious, but the entire process was an extraordinary family bonding experience. The young boys found an adventure in standing around the open fire pit, scooping the steamed shells with giant shovels, dumping them in the middle of a picnic table, and prying the shells open with oyster knives.

When Josh and Natalie imagined entertaining their friends at their new forever home, the oyster roast was a no-brainer. The idea presented endless possibilities. Josh’s brothers and parents offered their assistance, and the creative collective turned a backyard get-together into an annual event. All these years later, Josh and Natalie’s sons, Evan and Henry, have begun inviting their friends, too.

About six weeks before the date, Natalie, a Hernando alderman and accountant, creates an event on Facebook with a save the date invitation, including a note to bring friends if you want. She, Josh, brothers Adam and Noah, and Adam’s wife, Brittany, text the invitation to all their contacts. There is no RSVP, and nobody has devised a scientific way to estimate the number who will show up. Somehow, that has never been a problem. From 150 to 250 plus guests hail from Hernando, Memphis, Tunica, Birmingham, Jackson, Vicksburg, Oxford, and elsewhere.

Hanging bistro lights illuminate the entire backyard. The crowd spills over among several food stations while television screens broadcast SEC football. Beyond the patio, the back doors of the house beckon. There is always a crowd inside making themselves at home all over the downstairs rooms and in the dining room there is a table laden with desserts. The party resembles a town festival, and the Hernando community does indeed have a hand in it.

Miles McMath, owner of The Parish, one of Hernando’s local restaurants, fills the brothers’ order for 1500 oysters. Miles even provided his own Rockefeller trimmings and unique toppings for the chargrilled portions. Mrs. Hippie Eats, a local grab-and-go, was Natalie’s source for a tray of scrumptious scratch brownies and cookies. Hernando’s How to BBQ Right shop provided the original rub for the Boston Butt pulled pork barbeque.

Fish stew is the work of Kay Lynch. Akin to the best gumbo you ever tasted, Kay credits her friend Alice Anne Sander with the original recipe. She confesses that she rarely follows it to the letter. She tastes, tweaks, and multiplies as she goes and reports there are never any leftovers. The crowd devoured ten gallons of her brew for the last party!

A soiree of this type would not be complete without music, and Natalie creates her own oyster roast playlist through Spotify. Friend, Matt Crain, brings his professional sound system, and the pop-rock, country, and alternative jazz-rock sounds carry across the grounds so perfectly that listeners could be looking for the live band all night!

And speaking of all night, the party that began at 6:30 is not over until it’s over. The last car drives away about 2 am The last glowing embers from the fire pit are dying; empty dishes and full trash cans tell the story of a successful party. And the Lynch family has added a new memory to their store of family favorites. 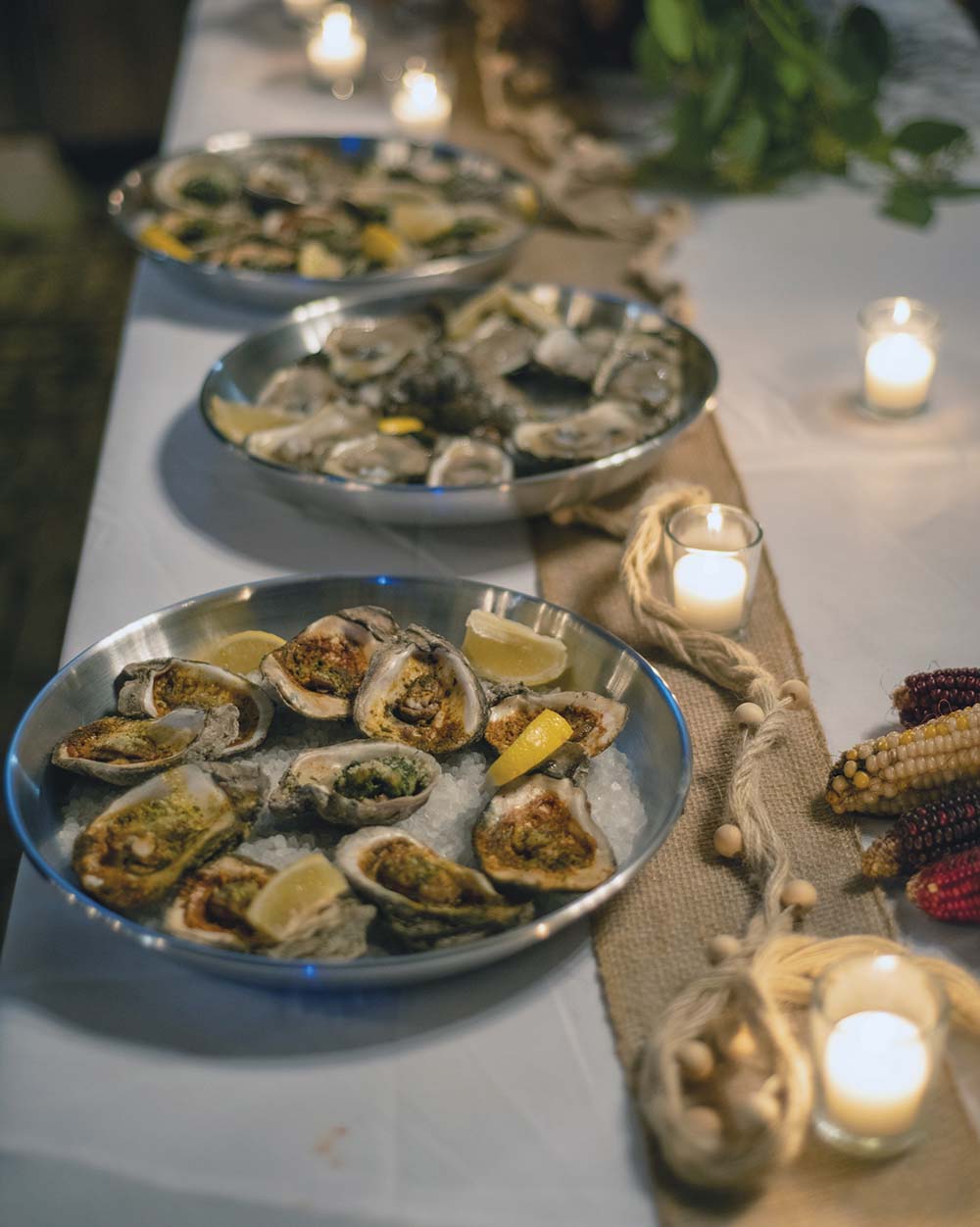 How to Roast Oysters

Step 2: To create the roasting pit, set the cinder blocks vertically to fit beneath the four corners of the sheet metal. Build your fire and allow it to get so hot that water will sizzle if sprinkled on the metal.

Step 3: Dump the oyster shells over the sheet metal in a single layer and cover with a soaking-wet burlap sack. The steam will cook the oysters in about eight to ten minutes. Use the shovels to transfer the steamed shells to the table. Let the sheet metal reheat and start the process again.

Step 4: Enjoy! Have plenty of oyster knives on hand. Guests will find that part of the fun is prying their shells open. Everyone assembles their dipping sauce from a generous supply of ingredients right at the table. 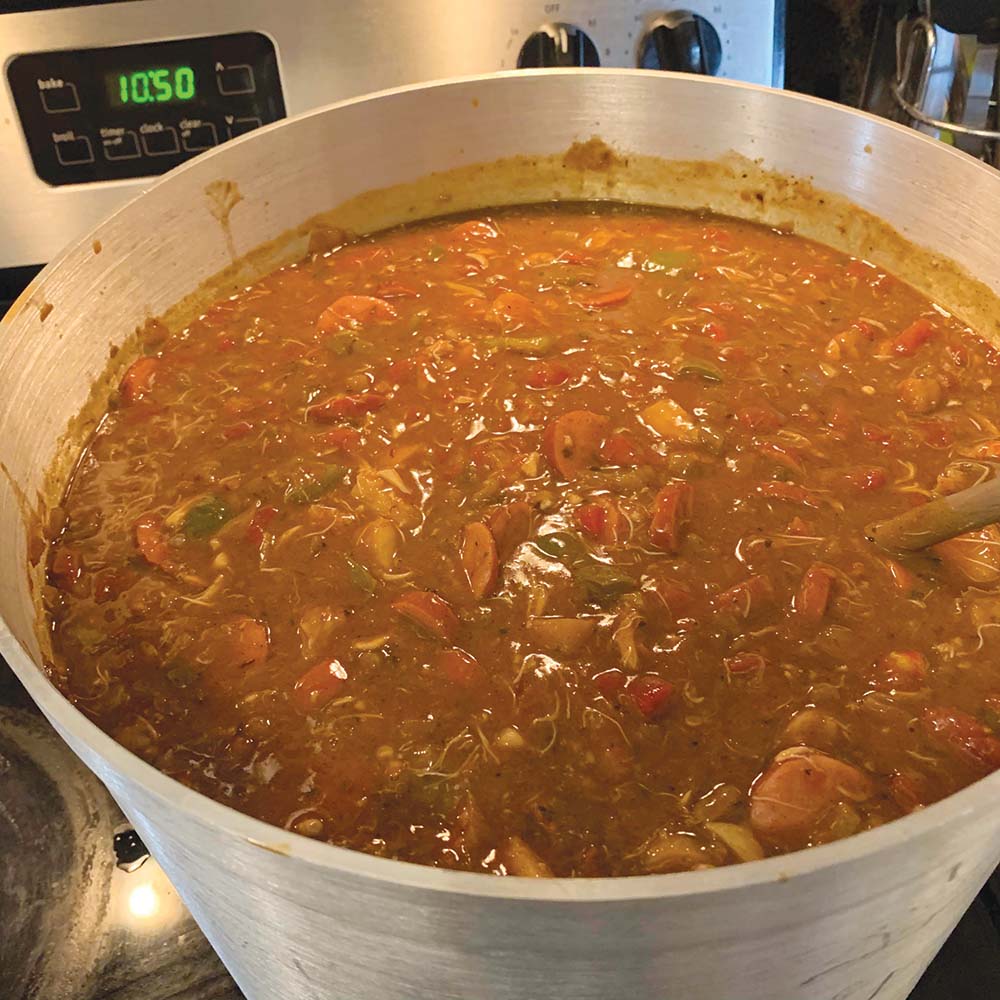 Chop onions, peppers, celery, garlic. Sauté in butter until softened. Add to the roux. Slice and brown sausage in a separate skillet.

Add everything to the roux. Mix well. Season to taste and let simmer on very low heat for at least two hours—the longer, the better!

Serve as is or over rice.