Not Your Typical Lake House

This traditional home in Chatham is bursting with extensive collections, family heirlooms, objets d’art, and colorful fabrics—all with a stunning view of Lake Washington 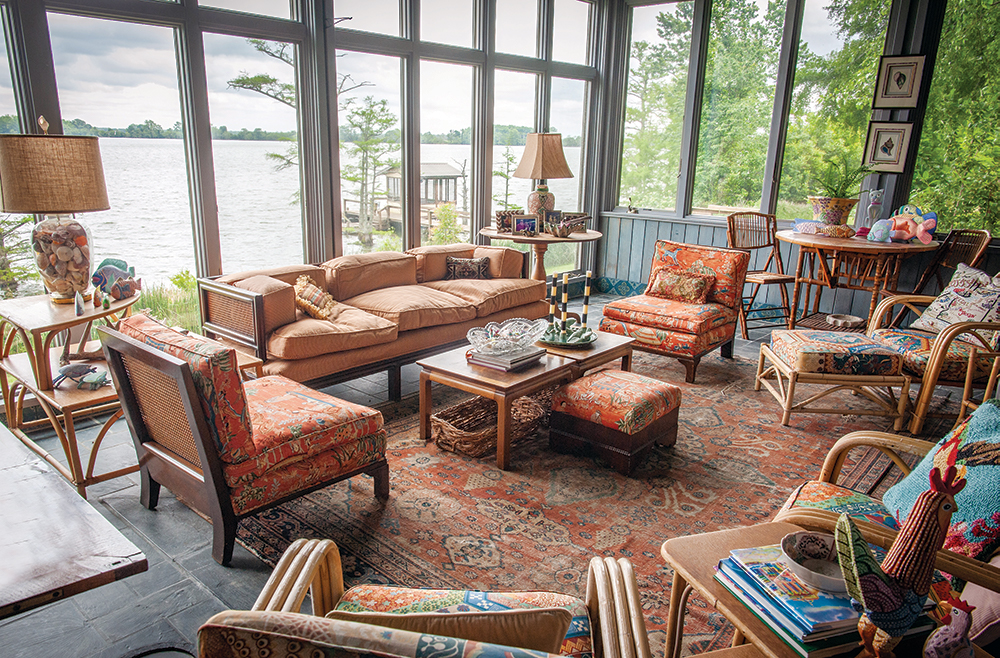 Cypress trees emerge from the sky-blue water of Lake Washington, framing the pier that stretches from the slope of Brucie McKamy Mintz’s backyard. This exquisite scene, so finely composed it could be a Japanese print, is visible from every picture window along the back of her house.

Inside, a joyous riot of color erupts and collections abound. This ranch-style house built by her father, Bill McKamy, in 1950, was his home with her mother, Mary Adelyn, for more than fifty years. Now it’s hers, and the retired lawyer has gradually updated the interior for a comfortable home that honors her past, embraces the present, and will glide gracefully into the future.

Like treasured loved ones, family pieces handed down from both sets of grandparents surround her in every room. Collections —English Staffordshire figures, Wolfe Studio birds and more, Hungarian Herend porcelain, and Jamaican folk art—speak to a lifelong hobby of gathering things that charm.

No sooner does Mintz settle in her sunroom than a Baltimore oriole alights on a patio feeder—another splash of color on a site that revels in it.

Mintz practiced law for about forty years in Monroe, Louisiana. Though she loves that town and has great friends there, ultimately it just didn’t feel like her own. “I had it in my mind it’d be nice to come home.

“This farm has been in my family for several generations, and I knew I didn’t want to let it go,” she says. “It’s just an old Southern feeling of being tied to the land.”

The house on the lake’s western shore was a two-bedroom, one-bathroom endeavor at first. As McKamy children arrived—Brucie and a younger brother and sister—the house grew to accommodate them. It’s now three bedrooms with three and a half bathrooms.

Mintz began slowly updating rooms years before her retirement with the help of MarSu Interiors, co-owned by designers Marla McGee and Susan Sutherland of Greenville. “We just spiffed it up, I guess you’d say.”

“We’d do a room a year,” working with fabrics, wall coverings, paint, bedding, and more, says Sutherland. “We based everything on her traditional mahogany furnishings, which have more of an English flair…”

“…and threw in some fun,” McGee adds. Updates and whimsy fold right in with elegant heirloom antiques and accessories for a home with as much personality as its owner.

The sunroom is Mintz’s go-to retreat, for its handy proximity to the kitchen, lake and patio views, TV, colorful patterns, and abundance of art. Cypress paneling harkens back to the room’s screened-porch origin. A plantation desk is an old family piece, likely from Natchez via her father’s family roots. A seaside watercolor by La Jolla, California, artist Georgeanna Lipe (her father’s first cousin) hangs above a pale-yellow chest adorned with a blue chinoiserie design, also echoed in lamps and urns. “I like a little touch of China, definitely.”

The antlered deer skull is Mintz’s own pandemic “souvenir,” discovered beside a turn row on the farm during one of her many walks. More antlers tuck into bowls with shells or onto a sunroom tabletop. She is an incurable collector.

“I have tons of English Staffordshire. Way too much,” Mintz says of the mostly nineteenth century porcelain figurines she’s collected on trips to England, in antique shops, at Round Top Antiques Show in Texas, and even on eBay. “My children say they’re going to have me committed if I buy anymore,” she jokes. She’s drawn to the naiveté and pretty colors of the figures. “They’re almost childlike in their simplicity and attitude. It just makes me happy.”

Her breakfast room is wrapped in a cheery Lee Jofa wallpaper, “so perfect for the lake” with its lake flowers, birds, and shades of blue. “It really reflects what’s going on outside.” The light fixture, blue glass etched with hummingbirds and trailing flowers from San Miguel de Allende in Mexico, pairs perfectly. Gingko leaves on lamps and drawer pulls flirt with the outdoors, too, where a huge gingko tree is a standout. A collection of oyster plates—inherited, gifts, and eBay finds—doubles as intriguing wall decor just outside the kitchen.

The dining room’s chandelier, table, and chairs were once part of her maternal grandmother’s house in Leland (now gone). Mintz’s Davenport Imari china dates from the nineteenth century and includes some pieces passed down many generations, “but not very much,” she says. “I always have my eye out for it.” The pattern’s deep navy blue, gold, and salmon hues echo through the rest of her house.

Her paternal grandparents’ home, Everhope—an antebellum house on the farm that burned decades ago—was a source of furniture, too, including a scrolling walnut stand displaying her antique china. Her mother’s wedding silver, Gorham Chantilly (“She had every piece known to man,” Mintz says, pointing out the ice cream forks), sterling silver goblets from her great aunt, and more complete the setting. Monogrammed linen napkins bear the initials of family members long passed, welcoming them back to the dinner table.

In the living room, a marble-topped sideboard from Everhope supports a crowd of Staffordshire figures as well as antique French bronze candelabras themed war and peace. The boy depicting war still has his original tiny sword. “My father remembered playing with this when he was small.”

Ancestor portraits and Oriental rugs lend a formal air, tempered by the rattan chaise at the window and fun ‘70s-era lamps by the sofa. “I didn’t want it to look stodgy, with everything old.”

Artist Will Gray Edwards from Indianola, a good friend, transformed the mantel with a faux bois finish that more closely aligns with the grandfather clock nearby. He also lent a hand and an artist’s eye with rearranging and tweaking furnishings during the pandemic.

Mintz took care to make her house on the lake, though remote, welcoming for guests. Good Wi-Fi (“As good as you could get out in the country”), scattered TVs, comfortable beds and bathrooms—“Those were things I really put a lot of thought into because I really love to have company.”

A guest bedroom and bath’s chartreuse walls share a bright, youthful spirit, as does the bold ikat fabric on bedding and window treatments. Gutting and modernizing the bathroom was the biggest job for Mintz’s move home. The result is fresh and fun, with a glass shower, basketweave tile floor, and beetle paintings. The bedroom’s trio of rose marble-topped chests trace back to her Leland grandmother. Walter Anderson prints, McCarty and Wolfe rabbits, and frog and hummingbird pillows welcome in the outdoors.

“I live out in the middle of nature,” Mintz says, noting the deer she sees by the dozens in winter fields and the eagles that nest nearby.

Another guest room, its walls just a kiss of blue, kept original plantation shutters and decorative molding that frames each twin bed. Mintz picked up the pair of trumeaus at Traditions on Trenton in Monroe (owned by good friends). Apple green gingham cushions spruce up cane back chairs, and an eye-catching pair of Italian Capodimonte porcelain lamps (also from Traditions on Trenton) sport fanciful felines in their decor.

Mintz’s master bedroom also has the gorgeous lake view, its blue hues reflected in Matouk bedding and fabrics. Her parents had put in a dressing room, but her mother never used it as such. It quickly became her little sister’s childhood bedroom then a storage room. Mintz reclaimed it for its original purpose. Goa Green by Thibaut wallpaper livens up the walls with flora and fauna, greens and blues, and a trade route feel. “I wanted this as soon as I saw it!” she says. (Her daughter, Charlotte Muir in North Carolina, used the same pattern on nursery walls when her baby was born).

“This is such a luxury,” Mintz says, reveling in the room’s cheery surroundings. Her antique blue enamel-topped dresser, jars, and mirror, collected from all over, fit right in.

The bedroom chandelier is one more piece with Leland family provenance. “This house is just polyglot. There’s stuff from everywhere.” Her parents’ Danish modern bedroom furniture, silvered to a lighter shade, won Mintz’s approval. “Now, I think it’s very attractive. I really like it a lot.”

The step-down sitting room was once a pool room for water exercises that helped her mother’s arthritis. Now, a secure wood slab and Oriental rug hide the drained pool. Higher ceilings accommodate taller inherited pieces, such as a secretary from Everhope and a pier mirror from Leland. Bamboo and rattan furniture have a comfortable rapport with the more formal pieces.

Portraits of her children, Charlotte and Ben, decorate the walls, and a landscape of her lake view hangs over her bed. Mintz commissioned it when she lived in Monroe, taking photos of the scene for artist Edmund Williamson to recreate in a painting.

“I had it hung in my office for years, so when I sat at my desk, I looked at it and could relate to being here.”

Now back home on Lake Washington, all she has to do is find a window, and voila.