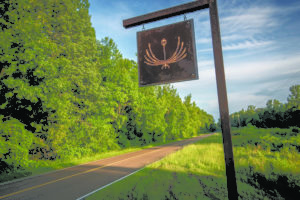 The mighty griffin. The phoenix. Native American myths, too, focus on the majesty of our feathered friends.

Far removed from those ancient lands and cultures, the drive out of Oxford on Old Taylor Road which was once a languorous, bucolic journey out to the little catfish shack in a tiny crook of road known as Taylor, is now an immersion into an urban extension enveloped by rows and rows of apartment complexes, condo-miniums, and new retail developments.

It’s only when you finally feel like you’ve left this newly minted Oxford sprawl, like you can finally roll down the windows and take a deep breath of country air, that you arrive upon the twenty acre farm that houses the Wonderbird Distillery. It’s perched upon a slight hill and surrounded by grasses, clover, and good ol’ Lafayette County soil. The property was purchased just three years ago by an unlikely trio of entrepreneurs, each with their own tenuous but special relationship to the area—mostly due to family members having attended Ole Miss. They also brought together a diverse professional background. More importantly, they shared a desire to get out of the corporate world and a love of gin.

Before co-founding Wonderbird, Forster made his living as a corporate lawyer. Tom Alexander was a software engineer, who had mildly dabbled in home distilling while living in Austin, Texas. Chand Harlow had been working in the world of finance in New York.

As I pulled up the dirt drive on a summer afternoon, I found Forster waving me in, greeting me into the open-air barn that the trio built with their own hands over the past two years. 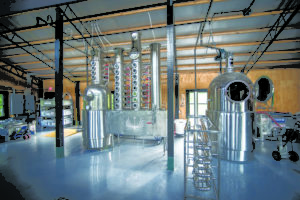 The base grain for distilling gin is essentially irrelevant, Forster tells me. Most distillers use wheat, or even corn. Often it’s an economic decision. What’s cheapest, what’s available. Many distillers don’t even make their own substrate—or base spirit—preferring to import it from areas closer to where the base grains are grown. But the Wonderbird trio had a specific goal of using locally produced ingredients. And they spent more than a year deeply immersing themselves into the art and craft of distillation, attending conferences, hiring consultants, visiting other distilleries, and enrolling in the Seattle-based Distillery University. Each decision was considered carefully, including the rare decision to use rice as a base spirit.

“We are now the only distillery that uses rice to make gin,” Forster says. “We looked at corn and looked at sweet potatoes, but when we got to rice, something about it just spoke to us. We loved what it did to the mouthfeel. It’s very clean and slightly aromatic.”

But not just any rice. Wanting to keep it local and intimately concerned with every nuance that the grain might impart, that meant jasmine rice from Two Brooks Farm in Sumner. Two Brooks Farm is currently run by tenth generation farmers Lawrence and Abby Wagner and prides itself on the creative aspects of farming combined with a carefully balanced nexus of ecology and agriculture—a mindset not that different than that of the Wonderbird trio.

Not only was it more economical to ship in local grains from a short distance, the rice helped the distillers define the 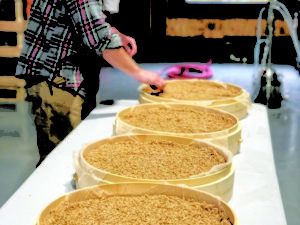 unique characteristic they were looking for. This is where esoteric terms like “mouthfeel’ and “weight” come into play. These are things that many people don’t think about when they’re swilling their summertime gin and tonic, but these guys have thought about it. A lot.

They’ve even developed their own system to propagate a specific type of cogi— a fungi like substance that helps in the fermentation process—right there on the property, in the barn. They borrowed from the sake-making tradition and even bought equipment from a sake maker in Nashville to help the cultivation.

But what makes gin, gin, is not the base spirit: it’s the botanicals. And that’s why this trio of artisans chose to distill gin.

“It gives you a lot of creative latitude and the ability to be expressive and capture a lot,” Alexander explains. Even with whiskeys you have more constraints. With gin there is a huge area of creative exploration where you can use any botanical in the world. That’s somehow very attractive, something that can show off the best of what Mississippi has to offer.” 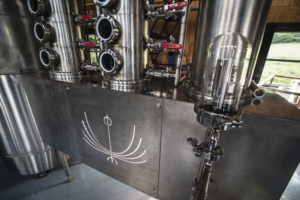 More than twenty different herbs and other botanicals were involved in the making of Wonderbird.  Not only that, different permutations of those different essences can be rearranged and imparted upon the base spirit in ways that are both subtle and sublime. Yet every specific concoction and conflagration is unique. Sometimes it’s more alchemy than art. Finally, they settled on a mix of ten botanicals, including pine needles and red clover that are foraged from their farm.

When you buy a bottle of Wonderbird Gin, you will see the number sixty-one emblazoned on the label. That particular nomenclature indicates that it was the sixty-first specific blend of botanicals that the trio of artisans arrived upon, even though their efforts when into dozens of iterations beyond that.

“They were all interesting,” Forster says. “We went deep into the eighties, but we kept coming back to sixty-one.” 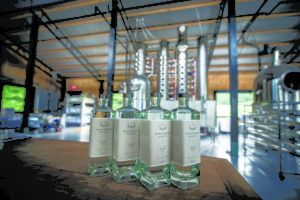 The distillery was born not just out of commercialism or out of a desire to make something unique. Gin was chosen for both reasons—the creative aspect and the market need.

While bourbon, tequila, and vodka have had and recently enjoyed rapid and vast periods of dominance in the marketplace, gin has yet to have its moment. But it’s coming. And the men of Wonderbird are ready for it.

“We knew gin from the very beginning,” Forster says. “We all happen to love gin. But if you look at a pie chart of U.S. spirit consumption, gin is about 2 percent and has not yet had its ‘vodka moment’ or ‘tequila moment’ where it’s in the teens or twenties, but we think it’s going in the right direction. The mixology movement has moved from the big cities to smaller towns and kitchens, and the core of the cocktail culture is gin, especially for classic cocktails. We really think that’s moving in our direction.

To that end, the Oxford bar and restaurant scene has already embraced the spirit in creative ways.

“We’ve been welcomed with open arms by the creative people around us—the restaurants and bars,” Forster continues. “We are getting on a lot of signature cocktail menus which is a huge validation. Track 61’s biggest drink now, even bigger than the Volta margarita, is something called the Viceroy which uses our gin.”

Plans to extend distribution into neighboring states stand to expand that creative palate.

Apart from other distilled spirits, gin production offers the opportunity to be creative in a sense that can be artistic—-it’s no wonder that the walls of the distillery are peppered with the work of local visual artists. The crafting of this spirit is viewed as an art form unto itself, as unique as any painting on the wall or sculpture adorning the vestibule.

But the third reason was simply a practical one: “If you go to make bourbon, you need years to see a ROI, but with gin we can go stem to stern in thirty days,” Forster says. 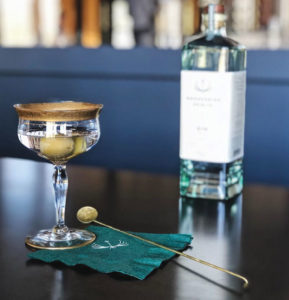 Every bottle of Wonderbird is made on site in Taylor by just these three guys. They distill it, they bottle it, they cork it, and they affix the labels.

Their first bottle was shipped in May of 2019. By July they had shipped their fourth batch of about one hundred cases to their distributor—more than two thousand bottles. They’re working hard to ramp up production in order to meet the inevitable demand. Plans are already in place to extend distribution to Alabama and beyond.

Another way they are helping to promote the brand is by hosting events on the property. In order to distill spirits in Lafayette County, they had to jump through the regulatory steps to attain resort status, and a big part of that was providing a boost to local tourism. To that end, the distillery already hosts tours and tastings, has hosted a number of afternoon barbecues, and is opening the space to events such as weddings and other parties.

“We hope to accelerate from here, but we are growing this business very methodically,” Forster says. But we won’t go too quick too fast.”

As for the name Wonderbird, the trio again methodically went through a carefully considered process.

“The name was probably the hardest decision we had to make,” Harlow says. “You’re dealing with three opinions, and there were a bunch of names we liked but were already taken. Independently Rob and Tom started getting into ornithology. This is a big flyway for bird species.”

“We knew our core values wanted to be about optimism and hopefulness,” Forster adds. “The idea of reinventing ourselves started to come up.” That notion recalled the mythologies of the rising phoenix, the powerful griffin, and the majestic thunderbird.

“When the name ‘Wonderbird’ was mentioned,” Harlow says, “We all three instantly knew that was it.”