Whether spent hunting, fishing, hiking, entertaining, or just kicking back from the busy week before, weekends at MeadowBrake are rich with memories in the making. “How did you ever find this place?” is the first question visitors often ask, after they make the long drive deep into the woods and arrive at Peggy and Charles Ed Snipes’s country cabin. They will tell you that the answer is, “after looking long and hard.” They knew what they wanted, and it was elusive: deep woods with the mix of pines, oaks, redbuds, and dogwoods they recalled from their native Georgia and Alabama.

They found just what they had in mind in 1997, when they came upon one hundred acres of lush forestland in the Black Hawk area of Carroll County, complete with a rustic cabin.  They named their woodland idyll MeadowBrake. “It’s a combination of my maiden name, Meadows, and a reference to a favorite boyhood hunting spot of my husband’s, Canebrake, in Dixons Mills, Alabama,” explains Peggy. Along the way, they have acquired extra contiguous acreage, bringing the total to three hundred, with still more leased for hunting. Four ponds, two of which they expanded and stocked with bass, bream, and catfish, complete the property. 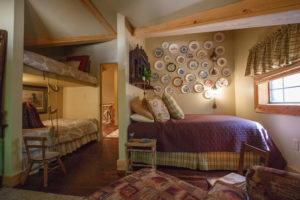 Just an hour and twenty minutes from their weekday home in Greenville, MeadowBrake soon proved to be the perfect getaway for the Snipeses and their two young daughters, Brantley and Maggie. But soon the original cypress cabin (which Peggy describes succinctly as “rundown,” with no insulation and a beat-up tin roof) proved not quite satisfactory. It had come fully stocked and furnished, with “lots of Fiestaware and vintage quilts and also lots of wasps and mice,” recalls Peggy wryly. “And we could only use it September through April; it was just too hot in the summer, and the wasps won the ongoing battle.” It only had two bedrooms, and smack in the middle was a crude “privy.” “For privacy, we used the girls’ old boom box, which fit perfectly atop the toilet,” she laughs. “You had to go in there and turn it up real loud.”

The girls grew up loving time spent with their dad out in nature. Brantley, who is now a landscape architect and Main Street Director in Greenwood, is an enthusiastic bow hunter, and Maggie loves to fly fish on her breaks from her job in D.C. with The Washington Post. “We say we raised the city mouse and the country mouse,” says Peggy of their girls, both Auburn grads like their parents. 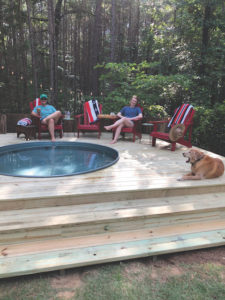 During the New Year holiday of 2010, things arrived at a bit of a crisis point. “We had daughters there with college friends, a friend with a new baby, and two uninvited flying squirrels in the cabin,” she says. “And that was the end of that. We knew we had to do something.”

“Something,” in her mind, was perhaps a wing added with more sleeping space and a new bathroom with a tub. But Charles Ed, who has a Ph. D. from MSU and recently retired from his job there as a cotton researcher, was of the opinion that the old place wasn’t sound underneath. So they decided to tear the whole thing down and rebuild, using the existing footprint. They began playing with ideas and came up with a rough plan that they drew on a paper napkin one night over dinner with their friend and neighbor, architect Celeste Sanders. 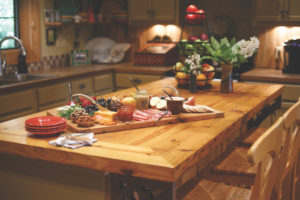 The new “old” cabin retains the rustic charm of its humble predecessor and lost nothing in translation except the inconveniences (and the mice). Now two downstairs bedrooms, plus a spacious suite of bunkrooms upstairs, and plenty of open living space can handle any number of family and friends who happen to be in residence for weekend or holiday fun. In temperate weather, which is most of the year in our climate, everyone can enjoy the grand and inviting screened porch that wraps three sides of the first floor. Porch swings, rocking chairs, and sofas provide plenty of conversation groupings, and a cozy hammock is the vied-for spot for naps on lazy afternoons. “We’re here three out of four weekends,” she notes, and this porch is where we sit in the early mornings to watch the birds and spy on the deer and rabbits, maybe a fox or two. And there’s a bobcat we’ve seen quite often.”

“The goal for the new cabin was to pay homage to the original one, while meeting the current needs of our family by increasing the space. We were really inspired by the concepts of reusing and recycling anything possible, both in construction materials and in the furnishings,” comments daughter Brantley.  Delightful examples of this are seen everywhere: the 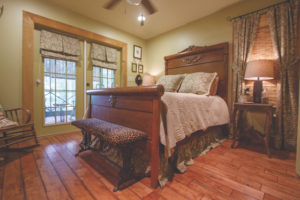 fireplace mantel fashioned from an old front porch step, the kitchen island crafted from old floor joists, the chandelier made of old deer antlers. The cedar on the staircase is from the old cabin’s bathroom, and the mud room is, in fact, the old kitchen. Additionally, all the wall panels and molding were planed from wood of the old cabin.

Acting as her own inspired interior designer, former art teacher Peggy had great fun creating the warm, colorful, and quirky rooms.  She assembled a comfortable mix of old furniture that either came with the original cabin or were vintage family pieces; the only guiding principle was, according to her, “everything had to be dog and hunting boot proof!” She mixed pottery collected from estate sales, antique fishing accessories such as poles and creels, and did her own sewing for cushions, curtains, and slipcovers.

With the seasons, the look and feel of the cabin changes, with different baskets filled with whatever is blooming, and collections rotated. In fall, a display of antlers decks the shelves to be replaced in summer with their seashell collection. “We’re not beach people, so this is as close to the beach as we get!” she laughs. 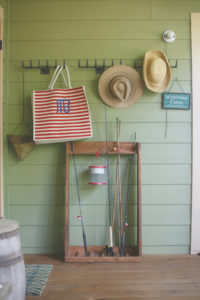 They salvaged and repurposed as much as they could from the demolished cabin and even looked to the woods surrounding the site for materials. The impressive open staircase from the living area to the upper story is a work of art in itself; the railing is handcrafted from random cedar branches and crossvine. It was very much a joint venture for the creative couple. “Charles Ed cut and re-cut each segment of wood and vine, and I stood at the bottom and gave him directions for which angle to turn each piece!”

Outdoors, the native plantings form a naturalistic, informal garden around the house, designed by their daughter Brantley. They looked to the woods for plant sources, digging up oakleaf hydrangea, beautyberry, smilax, and red honeysuckle. The daylily bed is an always-evolving feature, as Peggy likes to bring home different varieties culled from friends’ (“and sometimes strangers’”) gardens. Also, they have dug up bulbs from many old homes in Greenville, which re-bloom and multiply each year. A kitchen garden with herbs and vegetables was added a few years ago. 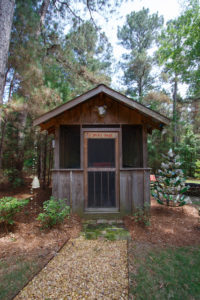 Not far from the house is a smokehouse, designed to resemble the cabins at Camp DeSoto where the daughters spent happy summers as girls. This houses Charles Ed’s four grills and Cajun smoker, as well as an extra freezer.

The open house plan, flowing from inside to porch to outdoors, lends itself well to entertaining, and the Snipes family does a lot of that. Anything can serve as a good excuse to gather a crowd; they celebrated Brantley’s passing her landscape architecture boards with a farmer’s market-to-table dinner for twenty-two on the back porch, and for one of Maggie’s recent visits, they threw a big shrimp and crab boil.  Steak dinners for Charles Ed’s colleagues, church potluck picnics, birthday sleepovers for friends’ grandchildren, even “porch yoga” sessions for her yoga group have been talked about—MeadowBrake has been the venue for all this and more, with every promise of more to come.