A Once and Future House

Designed with an eye towards the past, and towards generations to come, this charm-filled cottage is already packed with memories, and ready for plenty more. 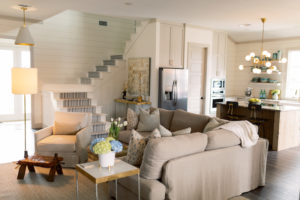 It is certainly unusual for a couple to build their weekend getaway cottage before their “forever” main house even exists, but that’s exactly what Mary Clair and Noel Cumbaa decided to do. They were still relative newlyweds in 2018, when they decided to build a small home on ”New Panther Farm,” that could be enjoyed for years to come. Situated on 2,100 acres, land that Noel is the fifth generation of his family to farm, it is a pristine jewel that blends deep architectural tradition with thoroughly modern sensibility.  Clad in pale moss-green board-and-batten siding, topped with a tin roof, it sits easily among the vast fields, as if it has been there for generations. 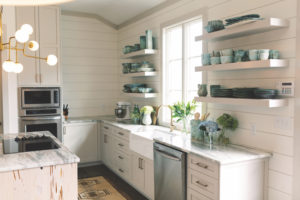 “We don’t have children yet, but when that happens, we know we’ll need to base in a larger town, for schools and such,” says Mary Clair, a Clinton native and 2014 MSU graduate, with a degree in interior design. “This cottage is perfect for us right now, and is a great place to host the guys in Noel’s hunting club.” The Panther Burn Hunt Club members generally bunk across the road at the camp, which is formed of two tenant houses joined together, but they show up eagerly for her breakfasts of egg casseroles and sausage balls. And in the evenings, after days spent out in the open, the fellows enjoy watching sports or playing cards in front of the fireplace, while Mary Clair looks on, busy in the adjoining kitchen.

Wanting an open footpath, with all the main rooms flowing into one another, the Cumbaas selected a Southern Living house plan created by Georgia designer James Farmer. “Farmdale Cottage,” was originally drawn as a 2,000-square-foot structure, with an optional addition of an 800-square-foot master wing. The latter provides a quiet, private retreat, down an enclosed gallery hallway, removed from the main living area and the two other guest rooms. Builders Devon and Craig Yoste of Leland brought the project to completion. 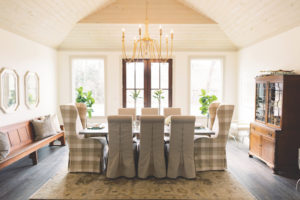 Perhaps the biggest surprise for first-time visitors is the banquet-sized dining room, open to the living area, on the front of the house where an entry would normally be found. With dimensions of almost 18” x 15”, it easily accommodates a long dining table for more formal meals.

Mary Clair was committed to a country vernacular, and was meticulous in her specifications. The kitchen has shiplap siding walls, open shelving, and a deep ceramic farmhouse sink, set into a marble countertop. 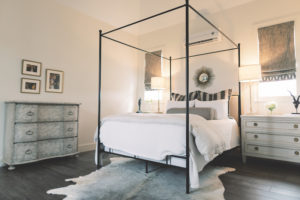 She chose a neutral palette, with emphasis on textures and textiles, artwork and accessories, to bring life to the interior. In each of the bedrooms, comfort was the guiding principle. She designed the headboards for the beds, and called on talented seamstress Charlotte Nichols of Leland to craft the curtains.

“The main thing I love about our home is that it’s comfortable and quiet, and we were able to totally custom design/select every feature that we wanted from the door knobs to the light fixtures,” she says. For Mary Clair, this project was a labor of love, clearly, and she approached the decking out of her own home exactly the way she approaches that of her clients. She runs Cumbaa Design Company out of a delightful “bird’s nest” loft space above the main living area, where a cornucopia of fabric, carpet, and textile samples surround her desk, waiting to be specified for the next innovative interior installation.

From every window in the cottage, there is a view of the vast land. A particularly special one is from the rear of the house, 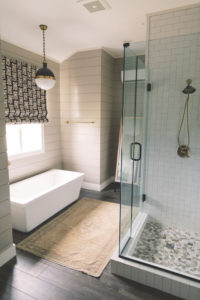 where a back porch is under construction.  “We got engaged just down the road there, at sunset,” she says, “And this porch will look out onto that very spot.

Panther Burn History:
Panther Burn, off Highway 61 just south of Hollandale, is quite tiny; not a town at all, but officially designated an “unincorporated community.” For all that, it has quite a presence: it has been the subject of a novel, The Children of Panther Burn, by Roosevelt Wright; the title of a song by Jimmy Phillips; and mentioned in a movie, “Blues Brothers 2000.”
The name “Panther Burn” goes back to May 22, 1816, when Martha Patience Vick married Colonel William Willis. As wedding gifts, the couple received a house on Cherry Street in Vicksburg, and Panther Burn Plantation. The name was derived from the clearing of the land for farm and settlement.
“They weren’t setting the panthers on fire,” says Noel Cumbaa, the latest in a long line of Panther Burn planters, “But their shelters in the brush of the swamp land were being cleared for cotton crops. Legend tells of panthers running from burn pile to burn pile seeking shelter.”
Martha and William Willis’s son John married Annie Ricks. They raised their daughter and only child, Frances Vick (“Fanny”) between Panther Burn and Vicksburg. Fanny inherited the 15,000-acre plantation and married Junius Ward Johnson. They did not have any children. Junius Johnson was killed in a tornado that hit the plantation house in the spring of 1919. Fanny Johnson, unable to run the plantation by herself, sold the property for 1.2 million dollars to four gentlemen of Leland, Mississippi: C. C. Dean, B.O. McGee, E.W. Wood and Leroy Percy. With the money from the sale, she built a white YMCA and black YMCA in Vicksburg in honor of her lost husband.
The four men purchased the land with a cotton crop already planted, and two of the largest cypress brakes in the Delta. They cleared these breaks and paid off their debts within a year, and then turned a profit with some of the best cotton prices the Delta had seen since the Civil War. Tenant farming provided the labor force. Part of the cypress wood from the breaks was kept on the plantation to be used as building material for the hundreds of tenant houses that once dotted the landscape of Panther Burn. Most of these houses are now gone, along with the community. Modern farming does not require a large number of workers as in days past, and the land where houses once stood proved more valuable as field. Today, Panther Burn is made up of a small cluster of houses (most empty now), a defunct cotton gin, tractor lots, farm shops, grain bins, and vast fields of mostly grain these days. Cotton is a rare sight now on Panther Burn, a result of increasingly lower prices. Only one cypress tree remains, as a reminder of the two large cypress brakes from a century ago.
“‘Panther Burn’ by Jimmy Phillips sums up life on a farm down in the Mississippi Delta, though times have changed since that song was written,” Cumbaa notes. “And Leon’s Juke is no more.”
The history of Panther Burn was provided by Ann Vandevender, secretary of New Panther Farms.