Technology has invaded every business, sport and hobby with the intention of making something better, stronger and faster and easier to use. But, sometimes that technology takes the participant out of the mix when it comes to repairs and improvement. When compound bows became the rage decades ago, hunters jumped in with both feet. Joey Buchanan was one of those, but when it came time for some simple repairs, he found the technology was a bite in the wallet to keep up with. That’s when he decided that he’d learn how to make his own bow and that sparked a deeper passion for bow hunting.

“I started making my own bows and started networking,” says Buchanan. “I saw more folks coming into the sport who were tired of the advancement of the technology. They felt like it wasn’t hunting anymore.”

Traditional bowhunting can include one of three different bows—a recurve, a longbow (think Robin Hood) and a primitive bow. Buchanan noted that in the late 1980s, Mississippi had a strong bowhunting organization, but has since waned. In the late 1970s, Indianola was in the running for the relocation of bowhunting legend Fred Bear’s, Bear Archery Manufacturing. Buchanan, who grew up in Indianola remembers wearing his Boy Scout uniform in a parade in Bear’s honor to bring his company there. The company decided to move to Gainesville, Florida where it still remains.

The appeal of traditional equipment includes cost, actually being able to watch the arrow (the speed is half that of a modern-day compound bow) and hunters can work on their own equipment.

“It’s so easy to get into it,” says Buchanan. “Though it is challenging. The effective range is twenty yards and closer, so you have to change your whole style of hunting. Instead of a shot at thirty to forty yards, we have to be on the money.”

John Agostinelli in Clarksdale had been a “compound man” for years, but when his compound bow needed a repair six years ago, the shop had to order the hundred dollar part and said it would take two weeks for it to arrive. He picked up a recurve bow while there for $130, and threw in some arrows to get him through the season.

“I never picked my compound bow back up again,” he says. “I killed a deer with the recurve and kept getting pulled more into traditional bows.”

He bought a longbow and continued his traditional bowhunting journey and even brought down trophy deer. But, he wasn’t satisfied and he decided to try and build his own.

“Two years ago, I barely got one made before deer season and I had the best time of my life. there were a lot of hogs around the levee and there’s no telling how many I shot,” he says. “I managed to kill three deer that year. then, last year I thought I knew what I was doing and made a couple of bows and I had the worst year ever.”

Agostinelli has created more than thirty bows over the years and wishes he had made the switch earlier in his hunting career. He does note that traditional bowhunters spend a lot of time practicing and honing their shot.

“You have to shoot it all the time to have any hopes of hitting something,” he says.

Different woods can be used to create a traditional bow such as Pecan, Maple, Osage, Persimmon, Hickory and several others.

“I made a lot out of them out of Elm, but now I like Hickory,” says Agostinelli. “It takes a long time because you have to dry out the wood.”

Buchanan spends about sixty hours to create a bow from scratch. His first one was a one-piece recurve crafted from Locust wood.

“I got the plans from a company called Bingham Projects in Utah. their catch was ‘Build Your Own Bow’. So, I called them,” he says. “Now, I cut my own wood and I make them out of Persimmon. I mill it, I dry it, I shape it and glue it up in my workshop and finish it all there. it takes me about sixty hours to make a bow.”

Buchanan also makes his own arrows using cane but he noted that Mississippi used to have one of the last wooden arrow manufacturers in Ripley. the arrows were made from Magnolia wood.

“I won the World Championship and three Southeastern Traditional Tournaments with those arrows,” he says. “In 1992, I couldn’t hit the side of a car, but two years later I won a championship. We enjoy practicing and tinkering with our equipment. It’s string and two pieces of wood. It’s challenging, but it makes you a better hunter.”

He’s also made longbows and “self bows”—bows made from a single piece of wood. traditional bows come in many sizes and are based on an archer’s “draw.” “A basic recurve range is probably 48 inches as the shortest and 66 inches as the longest,” Buchanan explained. “It’s based on your draw length. You can shoot anything in the spectrum, but a guy with a longer draw length needs a longer bow. 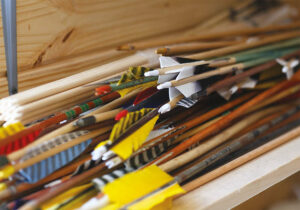 He noted a 60-inch recurve “fits about anybody and the longer the recurve, the more accurate it is.”

The technology that traditional bowhunters are enjoying is with arrows and with the broadhead attached. Carbon fiber arrows combined with higher quality steel broadheads give the hunter more power to bring down larger animals such as a Cape Buffalo and large feral hogs.

“Cedar is a popular wood shaft and now we have carbon which is a superior material to make arrows out of,” says Buchanan.

And, we have forged, stainless steel broadheads. Our equipment is so much stronger. it’s the same poundage on the bow just different, heavier arrows. The average speed of an arrow is 175 feet per second while a compound arrow is 300 feet per second. that’s why we use a heavier arrow, so it’s based on momentum.”

Richard Powell spends a lot of time on the road with his job and with kids at home hasn’t had time to create a traditional bow, but he enjoys using them.

“I’ve bought mine from guys who build them across the country,” says Powell. “I’ve made some arrows.”

Powell started out with a compound bow in the 1970s and then caught the traditional bow fever after seeing Fred Bear films and watching him on the American Sportsman TV show.

“I saw those films and dreamed about those bows. In 1993, I killed the last deer with a compound bow,” he says.

He made the switch to traditional bows and hasn’t looked back. The financial planner does fletch (add the feather) his own arrows from shafts that he purchases.

“I’ve got a 63-inch Schafer Silver Tip recurve bow I bought third hand off the Internet and it’s been the best bow I’ve ever owned,” says Powell. “It’s 62 pounds at 28- inch draw length. It shoots where you look and I feel confident with it.”

He also has a 60-pound Black Widow bow and a Morrison Cheyenne.

It’s back to the basics with traditional bows that brings the hunter more in tune and in focus with bow hunting for Delta hunters.