Blooms on the Bayou

Indianola couple shares their love of daylilies with friends.

The scientific name for daylily is Hermerocallis, derived from two Greek words meaning “beauty” and “day,” referring to the fact that the beautiful flowers only bloom for one day before fading. However, the plants make up for their fleeting show by having many flower buds on one stalk. Multiply those stalks by thousands spread over a six-acre lot, and the beauty is simply breathtaking. 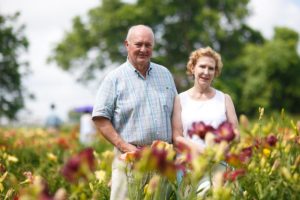 That’s the scene at the home of Hilliard and Mary Steel Lawler in Indianola. Their unique home, named Huckabee Hill, was built in its original form in the 1870s by Mary Steele’s great-great uncle. “My grandmother, father, my children and I were all raised here.” The home is nestled between Indian mounds and surrounded by wildflower beds, massive trees, and several varieties of chickens for good measure. It is here that Hilliard has worked since the early 1990s to create the showplace of daylilies that becomes the setting of an annual garden party for scores of friends and family.
Hilliard is the town veterinarian in Indianola; he is also a plant pathologist with an extensive knowledge of genetics when it comes to breeding the beautiful daylilies. His passion began when the couple lived in Michigan. “I had come to grow fond of hostas, and a friend from Chicago told me about a great nursery in Indianapolis that sold a wide variety of hostas. I went to the nursery and saw they also had daylilies. I really just fell in love with them.” 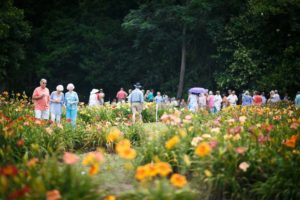 He purchased some daylilies that day, and when the family moved back to Mississippi in 1991, Hilliard brought some of the daylilies back South with him. “After moving back to Mississippi, I met a man named Kevin Vaughn, a research scientist who worked for the USDA in Leland. He bred all kinds of different plants and he taught me how to do it. He introduced me to other daylily growers.” Fascinated with the process of breeding daylilies, Hilliard began to learn all he could about the plants, including making a trip to Florida to visit a daylily facility.

What began as a short flowerbed in their Indianola yard has now spread into a huge field filled with all colors, shapes and sizes of daylilies, many of which were “created” by Hilliard. “I buy a few new plants each year to breed, and I cross-breed them with others. I flag the ones I like and keep them a year or two to see how they do, and if I really like them, I register them with the American Hermerocallis Society.” Hilliard also sells his daylilies through his company, Indian Bayou Daylilies. 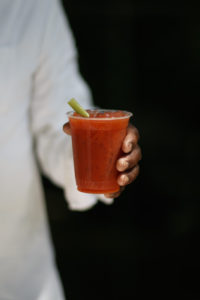 Because the flowers are so mesmerizing, folks naturally want to come stroll through the fields and see them. “It became a bit overwhelming to have folks come by so often during the blooming season,” said Mary Steel. “About fifteen years ago we had a garden party and invited our friends. It was a big hit, and we did it for a few years before we got busy with kids.” The party has been resurrected by popular demand in the past few years and recently, a group of about one-hundred-fifty people gathered in the Lawler’s garden early one Saturday morning to admire the field of daylilies. “We do it early, before it gets too hot,” explains Mary Steel. “We always serve the same menu of muffins, ham and biscuits and drinks. We move all the garden furniture under the shade trees and it becomes a very relaxing morning visiting with folks amongst the flowers.”
The Lawler’s children try to get back for the annual garden party each year. “We have a daughter in Texas and a son and his girlfriend in Atlanta and a daughter in Oxford who all came this year,” says Mary Steel. “Our son who lives in Washington, D.C. was here with some of his friends last year.” 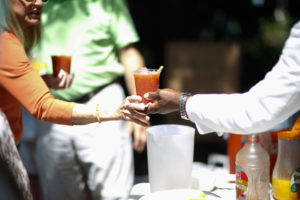 What Hilliard says he likes so much about the daylilies is that they don’t require a lot of care, and they are very easy to grow in this area. They are also fairly easy to breed. “I usually work with the plants in the morning, before work, collecting pollen, then in the late afternoon, I go back out again and pollenate the plants. I collect seeds around August, and chill them for about three weeks before planting them around Labor Day. They’ll sprout in the small flowerbed around April and I transplant them into the field where they’ll bloom from about late May to early June on through August.”
The Lawler’s daylilies have been seen around town over the years, showing up as alter flowers at church as well as for weddings, bridesmaids’ luncheons and such. “There’s just something about them,” said Hilliard. “I will go from really liking reds one year to lavenders another, and so on. But I never get tired of them, and working with them to see what they’ll do.”