Any time a one hundredth birthday rolls around, there is plenty of reason to celebrate! For Nancy and Don Barrett of 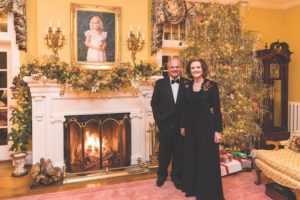 Lexington, the centennial being fèted was that of their grand house, “Château Thierry,” situated on a large lot near the old courthouse square. The 6,800-square foot dwelling, built in 1917 by prosperous local businessman Sam Gwin, was acquired by the Barretts in 1982. Last Christmas, the couple hosted a festive, formal seated dinner for forty friends to mark the occasion.

The house was christened by the original owner the year after its completion, to commemorate the World War One battle of the same name: Château Thierry was the first American victory that turned the tide of the War and was the cause for widespread patriotic celebration in July of 1918. “The house was in beautiful, solid condition when we bought it from the Henri Watson family,” says Nancy, noting special features like the eleven-inch-thick walls, centered with a ceramic layer between brick and plaster that provides ample insulation, and the perfectly-functioning original cast-iron radiator system. “So, really, at first, all the work we did was cosmetic—freshening and painting.” The house, like many built on that scale in the early party of the last century, is a composite of styles best described as “eclectic,” with elements of Mediterranean, Craftsman, and Neoclassical, with a nod to Greek Revival thrown in.

The Barretts had worked since the late 1960s with designer Buddy Graham, then of Navarro-McLean Interiors. Graham, who had previously done design work for the Watsons, helped them choose colors, papers, and fabrics for the many spacious downstairs rooms, and the five bedrooms. Over the course of time, they tackled more ambitious improvements, such as a guest addition, portico enclosure, and enclosing the original detached garage to make a summerhouse. 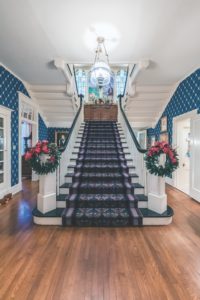 The expansive central hallway, centered by an imposing staircase, is flanked by large sitting rooms. On one side of the house, the porte-cochère was recently enclosed to create a glassed-in dining room, increasing the entertaining capability.  Architect Sam Coker masterfully designed this enclosure and also a new double porte-cochere on the back of the house to look as if it were original to the home.  Two sleeping porches upstairs allow even more company to enjoy the Barretts’ hospitality, and this more often than not includes some of their ten grandchildren, ages three to twenty. These are the offspring of the Barretts’ daughter and two sons, all three of whom, as it happens, are lawyers like their father and grandfather.

Both Don and Nancy are Holmes county natives. Her father, Sam Foose, Jr., was a cotton planter in Tchula, and Don’s father practiced law in Lexington. “Don’s father is listed as a guest at a birthday party in the first year the Gwins lived here,” says Nancy. “So many Lexingtonians have enjoyed coming to events here over the generations, and we’re so happy we can continue that tradition.”

On a crisp, chilly evening last December, the four fireplaces of Château Thierry were ablaze as guests entered to find every corner sparkling with colorful holiday décor. Tables were set in the dining areas, with extra seating at a huge round table at the base of the sweeping staircase.

Mingling over cocktails before dinner was announced, the guests enjoyed toasted rosemary pecans, and crisp deep-fried An event of this daunting scale invites the question of, “Who catered all this?” Nancy readily confesses, “I did it myself, with my wonderful helpers, whom I’ve trained over the years to valet, cook, set up, and serve.” As a result, the elegant meal and entire evening had a homelike quality not always achieved when outside professionals are brought in. and Laughing conversation and storytelling punctuated the evening, and when it was time to bid farewell, each sated guest was given a parting favor of gaily-wrapped homemade toffee and faux “Payday” candy bars, so that the sweet memory of a gala evening could linger on.