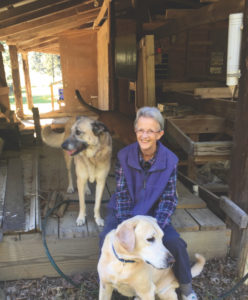 Growing up in Greenwood at mid-century, Christmas was a magical, memorable time, packed with local and family traditions, some of which endure to this day. I’ve lived in other places for much of my adult life and found that every town has its own holiday atmosphere, but there’s just always been an extra level of joy in the Delta, perhaps a reflection of the sense of accomplishment when the hard labors of summer and fall have finally slowed down.
The first “sign of the season” downtown was the rumbling of Greenwood utilities’ trucks along Howard Street, their buckets brimming with long lines of colorful bulbs and plastic pole decorations. No one seemed to mind the blocked parking spaces or the traffic jams, as this inconvenience meant that Delta Band Festival was just over the horizon. My newspaper reporter mother, Sara Criss, always seemed to have the inside scoop on which night those lights would be tested, and you could find our old station wagon parked by the Red Cross office, a perfect vantage point to see every single bulb burst into life with one glorious flip of a switch. Then they went dark again, silently waiting for that miraculous “Second Friday after Thanksgiving,” the day it never rained and Greenwood filled up with thousands of band members and visitors.
Woolworth’s and Sterling’s aisles were packed with the latest dolls and games, but children of today would be stunned at how limited the local toy selection was in those pre-Walmart, pre-Amazon days. That’s where the Sears catalogue came into play. My mother would meet the mailman halfway down the sidewalk every day in early November, hoping he would pull the thick book from his bag. When he finally did, her inner eight-year-old would take over, turning down pages and propelling her into the carpool line at our school, just bursting with joy at the chance to help us make our lists. You could tell by the look on her face that
Christmas season had arrived and it was “get- on-board-or-get-out-of-the-way” for the next few weeks on East Adams Avenue.
Thanksgiving was an afterthought at our house, formally observed only if it was our year to host my grandmother. Sara was not dealing with turkey and dressing when there were dozens of delights involving Crisco and sugar to be created for the upcoming weeks. The fourth Thursday in November, in her mind, was the jumping off point to Friday’s sales, when our already overflowing boxes of Christmas decorations expanded even further and her attention turned to “The Tree.”
Lord have mercy, “The Tree.” Every year, some poor trucker from Oregon or Minnesota drove halfway across America with a load of Scotch pines or firs, pulling his big rig exhaustedly into the Kroger parking lot on George Street late on an autumn afternoon. He probably needed a bathroom break or a cup of coffee, but first he had to deal with Sara. The back door of the truck was cranked open and one tree after another brought a frown and a head shake. Too short. Too tall. Too scraggly.
Finally the fullest, greenest, most hopeful specimen emerged. Within minutes, Kroger had a check, the beast was tied on top of the Plymouth, and off it went to our back porch, where my resourceful father kept it alive, somehow, for a month. He vacuumed up the dead needles in the living room until the massive family Christmas Eve party was over and Santa had slithered down our fireplace (which never had a chimney, but that was just part of the magic).
In the midst of all the Christmas morning commotion, he had one unchanging rule: “The Tree” would be defrocked, unplugged and hauled to the ditch before lunch. We ate leftovers and moved decorations back up to the attic like a line of industrious ants, knowing that next year would be just as much fun. The best memories are Delta memories.

Mary Carol Miller is a Greenwood native and the author of thirteen books on Mississippi’s historic architecture, including the Greenwood: Mississippi Memories series. She practices medicine in Greenwood and regularly takes in stray dogs who find her at her cabin in West, Mississippi.