Marshall Blevins, creating joy-infused paintings inspired by the blues, the past, and the lowly mule

If you sit for very long with the Church Goin’ Mule’s art, or even just a little while, you might find yourself feeling a bit uplifted. Perhaps even hopeful and happy, which is interesting considering that so much of her work is inspired directly by the blues. When asked if that is a paradox, her joy-infused paintings and their blues-soaked origins, Mule (she goes by Mule) says she doesn’t think so. She says she’s never gotten sad listening to the blues. Rather, she hears songs full of hope. There is gut-wrenching honesty and heartbreak, to be sure. Yet she claims, “They’re saying, ‘It was hard, but we’re still livin’.’ And that’s the crux of my work.” The text of one painting proclaims, “It’s not always sunshine and it’s not always night. By and by it will work out alright.” Ultimately, she wants her work to inspire hope. And to impart her love to its viewers.

Marshall Blevins, the woman behind the mule, made her first visit to the Delta in 2014. She was compelled by the blues, which, for her, “have always kinda been there.” She remembers listening to Howlin’ Wolf’s “Smokestack Lighting” and Blind Willie McTell when she was growing up in Virginia and Florida. In college, the blues became very important. “I was just drawn to it,” she explains. “Stephen King says the best writers are honest. I don’t think anyone’s more honest than blues musicians. The rawness and heartbreak. You can feel them singing with their own heart.”  She vividly remembers the trip from her home in Sunset, Louisiana, to Clarksdale. “I was completely entranced on that drive. We drove and drove. And the romance and the myth of it all was palpable. We saw all three of Robert Johnson’s graves in one day.” She recalls staying at Shack Up Inn and listening to the rain on the roof. “It was magical.” Eight years later, the Delta is not only her favorite place on earth, it’s home. Currently, she is the farm manager at Jacks Farms in Cleveland, where she helps direct the Jx Farms Artist Residency (jxfarms.com) and where she was a resident herself in January 2021. 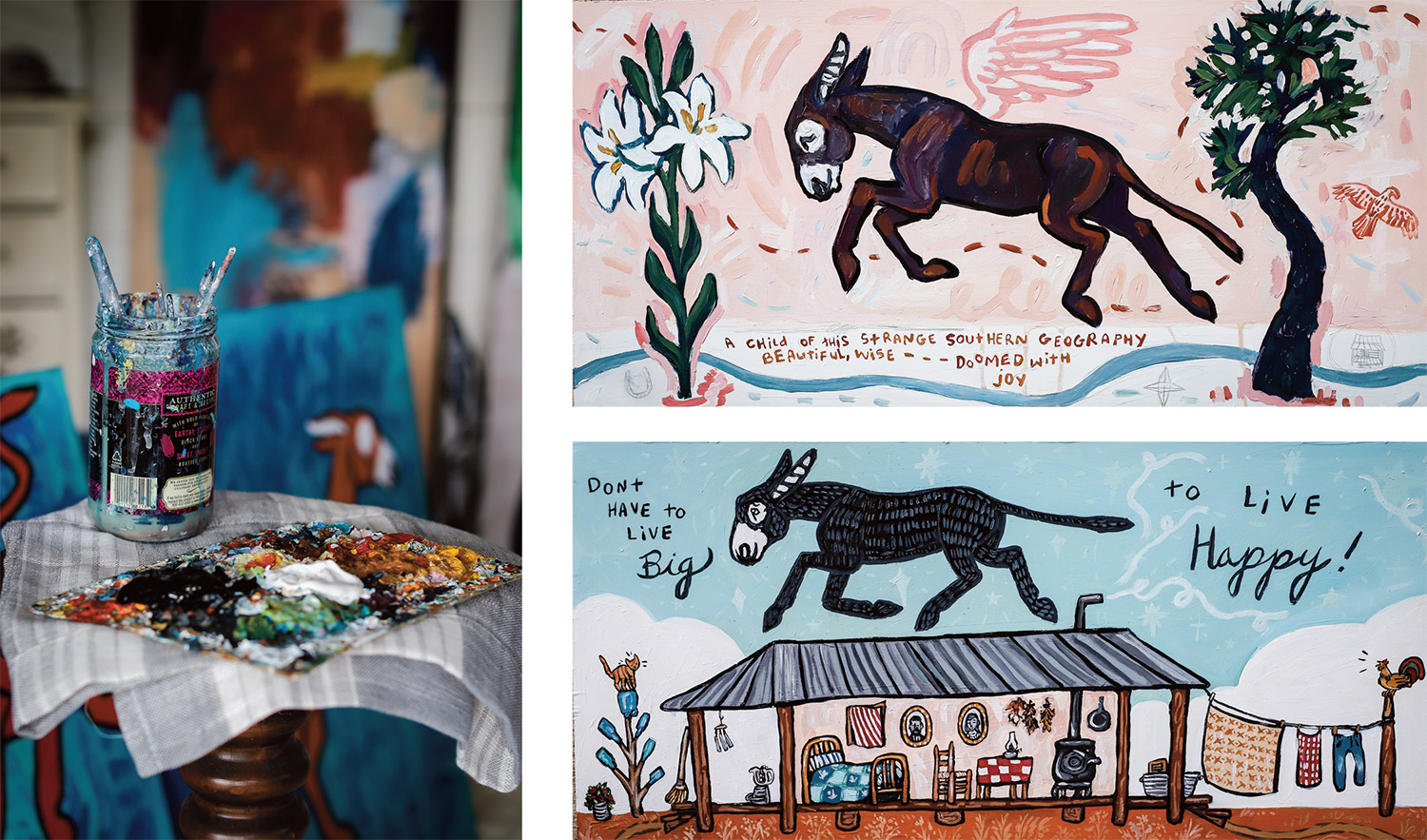 The former horse farm was lovingly converted in 2018 by members of the Jacks family, including renowned photographer Will Jacks, into a haven for artists. Creators of many different disciplines from all over the country apply for residencies that last from one to four weeks. The opportunity for inspiration and quiet and uninterrupted focus that a residency can provide, away from normal routines and environments, is invaluable and can result in groundbreaking artistic development. Often, residencies are pivotal in the lives of artists. Such was the case with Mule.

After graduating from college in Kentucky, where she double majored in art studio and art history, a photography job took her to southwest Louisiana. She was working as a horse-racing photographer and grooming dogs while developing her art and a growing conviction that she wanted to be a full-time artist. Living in the Lafayette area provided a very supportive artistic community, which was a wonderful incubator, but Mule needed to determine if she could make it full time. Eventually, she had the opportunity to conduct her first residency, two weeks in Georgia, which propelled her towards becoming a full-time artist. “It changed how I saw the world, changed my routine. I proved to myself I was capable. That’s why I’m so committed to residency programs.” Since then, her talent and her career have experienced continual growth and development. In January 2020, she had the honor of being selected as Artist in Residence at Twelve Oaks Nature Preserve in Ocean Springs. Although the four-month residency was cut short by COVID lockdowns, the nearly three months she had there were life-changing.

Tucked away, nearly hidden beneath sprawling, massive limbs of mammoth live oaks, is the antebellum house, now artist residence, where Mule and her dog, Wilbur, were alone most days. “Reading Southern writing and listening to Southern music is the backbone of the work I make. I dedicated all my time to reading, writing, and painting. Played the blues and gospel. I felt more connected to the world around me.” While there, she says she rediscovered “childlike wonder.” That wonder taught her to use her eyes and ears more skillfully—watching and listening to all the magic that was around her in the surrounding woods. One painting reads, “The whole world was music and she couldn’t listen close enough.”  To speak with her today, or to scroll through her photography, it is evident her wonder has not diminished but has likely become more acute. “Always seeking miracles,” is the text of another painting. Mule has made a discipline of seeking miracles and has clearly become adept at finding them. Her photography and paintings are the evidence. 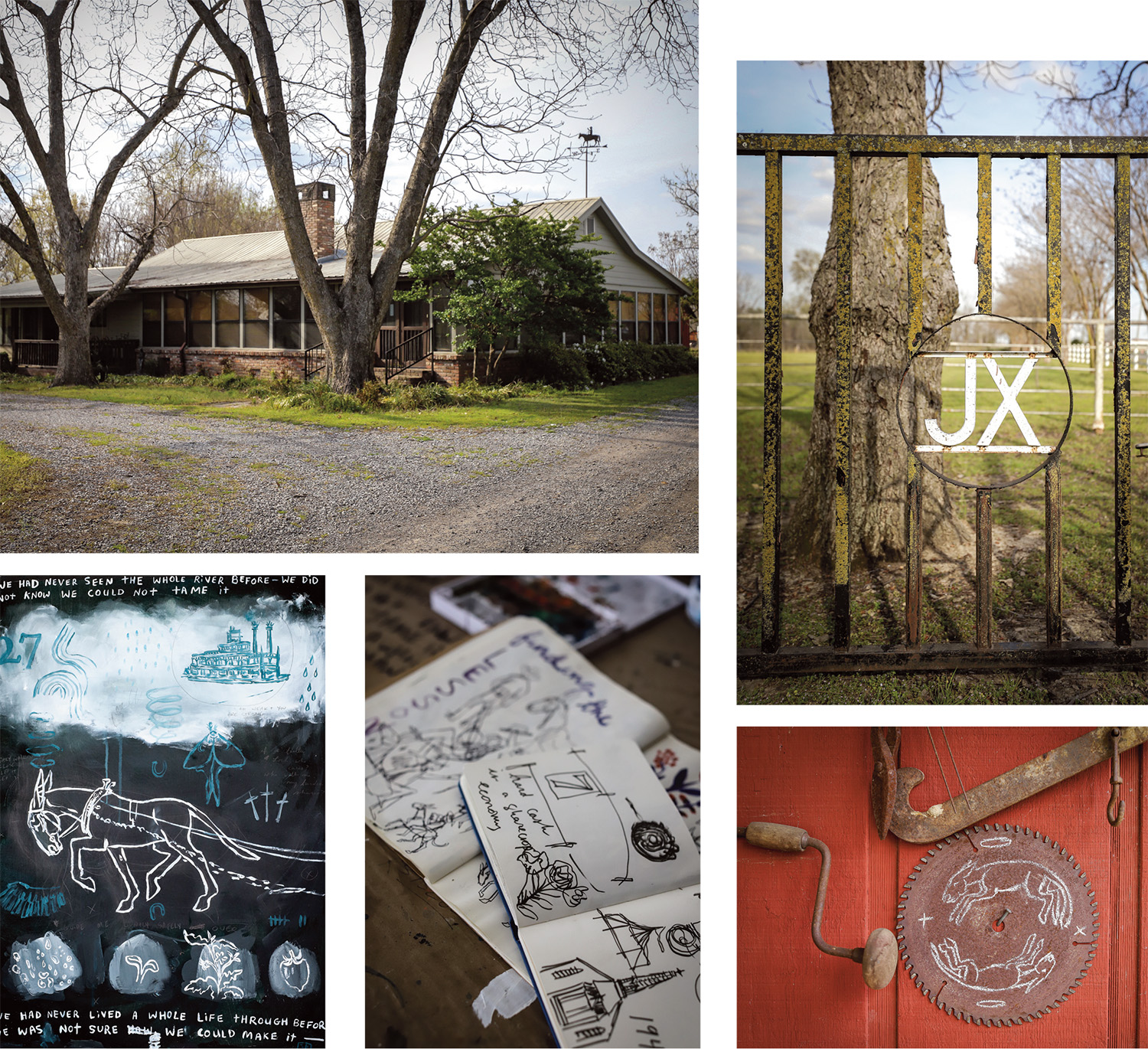 A very accomplished sketch artist and painter, Mule has been greatly influenced by Howard Finster and Bill Traylor and, more recently, Walter Anderson. Her paintings typically feature her iconic mule, though not always the same one, and some text, a lyric or phrase, bits of Scripture, or a thought. But why a mule? Like the blues, horses have always been around for Marshall. At the age of fourteen, she began working with racetrack horses and later was a racetrack photographer. She has been drawing horses forever it seems. Eventually, however, she took a shine to the slightly less beautiful, less gentrified mule. The mule is common. And in some ways, a common denominator.

“Mules were tractors and cars before we had them,” she explains. “They worked for rich people and poor people. They were in the country and in cities. He was always there, able to work harder, live longer, eat less. He worked six days and brought his folks to church on the seventh.”

The mule grounds Marshall as he plods along. He’s not so much the subject of her work as much as he is her traveling companion through this wonderland of miracles and blues and song and books and Bible and all the stories those contain. It’s his job to help her along, eyes focused, ears pricked, noticing all the miracles, stopping for her to pick them up and save them. A blog post describes the process, “You gather everything up and carry it with you for so long, and when it hits its time, it comes along. A phrase appeared out of nowhere, then its answer, then the work. Grateful. Magic.”

The mule also provides scope, as much of Marshall’s attention is focused on the literature and music, especially the blues, of that era in the South when mules were ubiquitous before being mostly replaced by tractors. There are troves of fabulous gothic, Southern tales, plenty of them tall and many of them true, about the legendary mule. According to Taj Mahal, for example, the blues were actually born behind a mule as the mule’s plowing rhythm led to the basic blues rhythm. Ultimately, Marshall is a collector of stories and considers herself a storyteller. She desperately wants to be a good one.

“Much of the art I make is concerned with stories, with love, with concern for the generations past and what they have left us.” That includes generations of musicians and writers. Yet she’s also seeking to preserve something that belongs to her, her stories and her family. She recalls growing up with family gatherings and listening to the adults tell stories all night, history and heritage she wants to remember and preserve. Her great-great grandfather, for whom she was named, farmed in North Carolina and had mules. Her mother’s father was in the navy and fought in World War II. And her father’s father was a Methodist minister, whom she never met. She recently acquired all of his sermons and has been poring over each one, getting to know him, admiring his labor and love.

“All the sacrifices and hard work they did. I have a blessed life because of all their sacrifices. We’re still here. They persevered, and they loved their family.” She’s speaking from her heart, and you can hear her gratitude. “Grateful every day,” is a terse note in one blog entry, stating her gratitude and reminding herself to practice it. That practice is exemplified in listening and honoring the stories that are entrusted to her. And she aims to hold on to them. 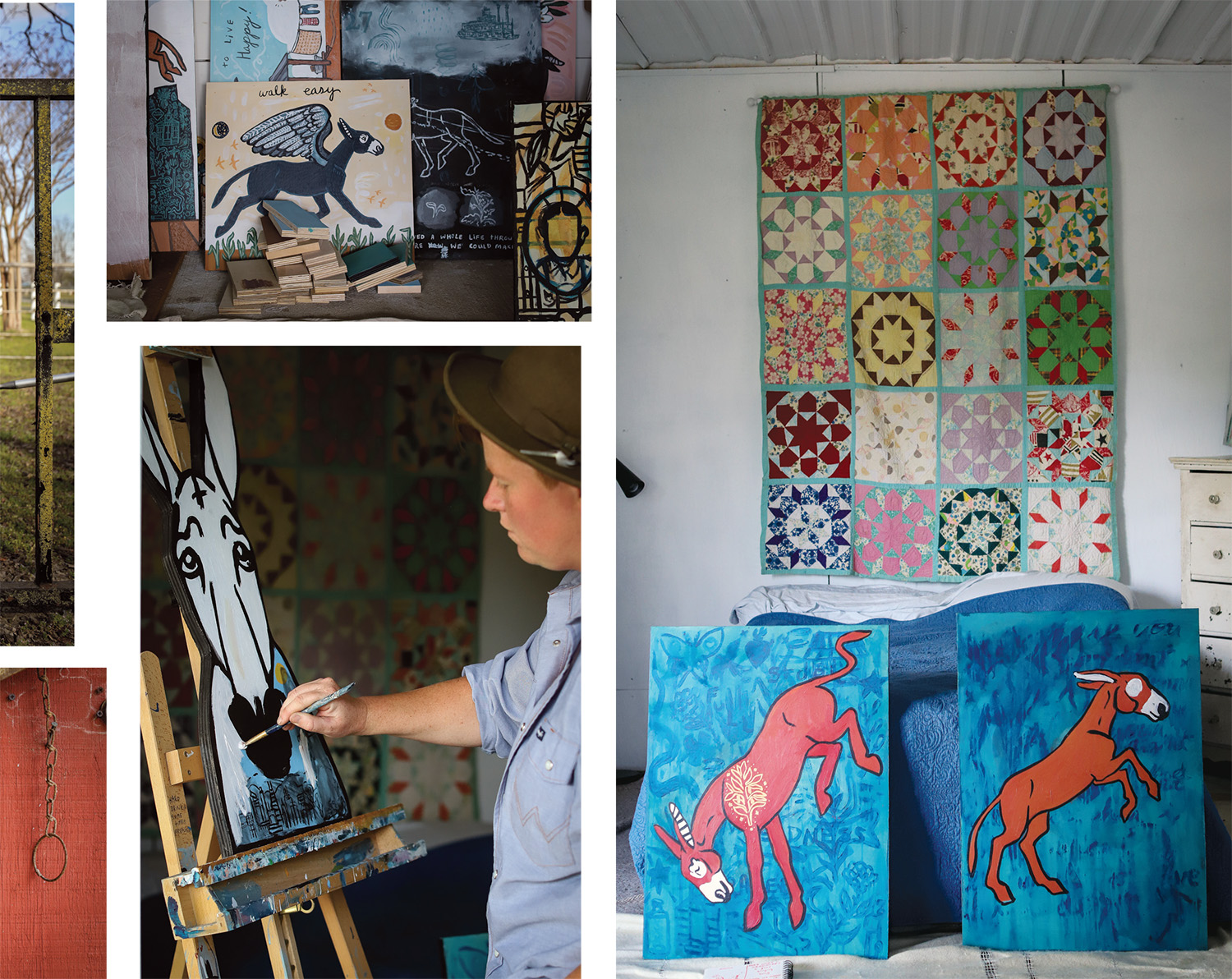 Now she’s living on Jacks Farm in the Mississippi Delta, and stories are crawling out of the ground and the trees and the farm buildings, and history is oh so present. She inhabits the stories. “I’m not a rock’s throw from Highway 61. All these musicians I love so much lived in this weather, smelled these smells, saw these gorgeous sunsets and the constellations, and had their feet on this land where I walk my dog. Will’s (Jacks) dad, Gerald, was a pillar in this community. My parents and I have lived so many different places, so people don’t know how great my parents are. But everyone here knows Gerald and has high regard for the family who used to own this place.” She’s teary now. “I’ve gotten to meet my neighbors and hear their stories, when it was their land, before it was my myth. If you can meet people where they are,” she pauses in thought and then emphatically states, “I’ve never had conversations like I have here.”

Marshall has been practicing meeting people where they are—taking the blinders off the ole mule and getting out of the rut of preconceived notions and judgments of new acquaintances. A recent blog entry reads, “Grateful for the kindness of strangers. Reading that hospitality to strangers, that love of strangers, is a thing of God—and Mississippi is full up on that.” She’s getting behind the veneer of opinion and class and politics to find the common denominator. The inner mule.

In a recent sermon she heard, Mule is church goin’, after all, regularly in fact, the preacher claimed that it’s easier to love someone when you hear their story. Walls really do come down when you just listen. “Cutting to the quick of life, people here will give you their whole story. In that sense, I feel more open, more curious.” The experience is driving her development. “My painting needs to step up more towards that. I feel like my work right now is quite solid. I want to get more loose. I want my work to bring hope and love to the world. A sense of community and knowing our neighbors. I want people to look at their neighbor and have an open ear towards them. And better attention to nature. The more you look at it, the more magic.”

Musing on the richness of her new community, she shares, “I was looking at a grain elevator the other day, thinking about how tall it is. And I was thinking about my neighbor. How tall would he be if he was measured in stories? Most folks around here are twenty, thirty stories tall. Or more. That’s why I think so much of all of them. They’re giants.”

Church Goin’ Mule will have a show at the Delta Arts Alliance in Cleveland on June 2.