From ice factory to ice cream parlor to hip downtown residence, The Big Pink gets cooler by the year 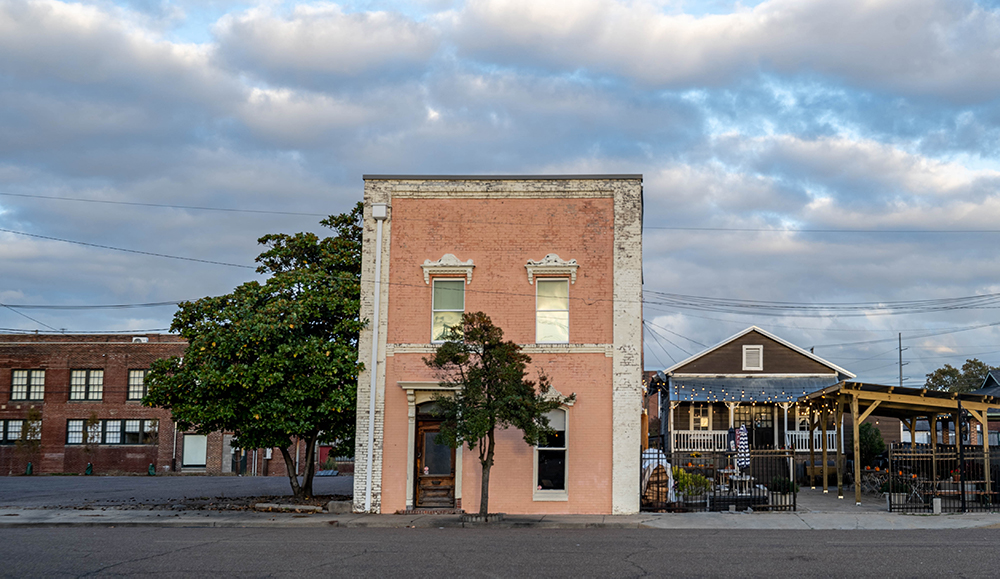 “The Big Pink,” as it’s fondly known, had a cool past from the get-go, with its ice factory roots and the years it spent feeding the ice cream nostalgia of Clarksdale’s youth.

Now, in its conversion to a residence, the building has gotten cooler still—the kind of cool that dances to the beat of Delta blues mixed in with the Old-World charm of New Orleans.

The West Coast music lover and entrepreneur behind the project was enticed to the Mississippi Delta—Clarksdale in particular—by its role in the roots of America’s music. “I thought it would be a fun place to explore and see,” he says. “From there, I gained a real appreciation for what it has to offer—the people and the potential.”

He first visited in early 2017, soaking up the vibe and flavor of the city and the Delta via Ground Zero, Red’s, the Shack Up Inn, tamales, Levon’s Bar and Grill, and more. “It just struck me as a very, very unique place. I couldn’t get over the friendliness and wanted to spend time there, invest time and energy, participate, and give back to the community.”

Involvement in Clarksdale’s music and festival scene filled the bill, as did his purchase, with a buddy, of the two-story circa 1910 pink brick building on John Lee Hooker Lane. It had been the popular hangout Garmon’s Ice Cream Parlor back in the day and, more recently, Big Pink Guesthouse. Included in the purchase was the one-story building next door, a former commissary/feed and seed store that was moved to Clarksdale from a plantation in Webb in 2005.

“I wanted a place that, frankly, had good bones and that had some historical significance and would also allow me to have some fun in renovating and restoring buildings to what I thought they should be,” he says. Now the Big Pink is a comfortable second home to enjoy with friends and family. Right next door is Hooker Grocer + Eatery, dishing up comfort classics with an upscale Southern twist.

The home’s decor is a mix of inspiration, taking cues from New Orleans shotgun houses, bohemian funkiness, steampunk fun, and the Clarksdale groove.

Converting a downtown commercial building into a comfortable private residence was quite the challenge, says Designlab owner/principal designer Jennifer Kelly of New Orleans. “It didn’t have bedrooms; it didn’t have enough bathrooms. … We had to gut it and renovate the whole thing,” adding walls, fireplaces, a whole new floor, even a kitchen.

Kelly fell in love with it immediately, she says, swooning over the wonderful staircase in the foyer, which had been moved there from Memphis, the story goes. “It’s jaw-dropping when you open the door.” Now, the foyer floor’s black and white honed marble tile, set in a diamond pattern, is a welcoming companion to the warm wood.

“Being from New Orleans, I love and appreciate old millwork and old character and old architecture,” Kelly says. “I wanted to keep all the existing fixtures that we could, too, because there were a couple of gasoliers still there.” They copied existing millwork trim—baseboards, crown molding, window and door casings—to continue through the house as needed.

Mod mid-century touches and select pieces from the West Coast come together in a way that’s as fresh and energizing as it is functional and comfortable.

A striking two-story atrium/courtyard with an overlooking balcony is the most obviously New Orleans expression in the design. It’s also the dining room. The table hails from the art department of a Portland, Oregon, high school where, for forty years, kids drew, painted, and left marks that remain still. It easily accommodates ten to twelve these days for gatherings that are likely just as creative. Blue and orange Bertoia chairs pick up on the tabletop’s fun leftover flecks of paint. The gray herringbone brick floor subtly ties in with the abundance of surrounding red brick in the archways and wall.

Gas lanterns and a custom-forged iron railing enhance the French Quarter-like balcony that overlooks the airy atrium space, with louvered doors completing the look. A pair of massive dropped Baroque-style chandeliers connect to the ceiling of the twenty-five-foot-high atrium, suspended by cords covered in cobalt blue velvet. Some of the home’s lighting, including the St. Charles gas lantern out front, comes from specialty shops on New Orleans’s famed Royal Street, contributing to an authentic French Quarter feel.

In the living room, a landscape painting by Clarksdale artist Hayden G. Hall, of a cotton field after a rain, anchors the sense of place. Musical instruments resting casually against the mantel and a framed poster of roots musician C.W. Stoneking also nod to the town’s musical identity. The gas fireplace is a new addition, “but it feels like it’s been there forever,” Kelly says, thanks to the early 1900s mantel she found in Natchez. “I like to search and find pieces that have meaning and have warmth. It’s still kind of rough, but we liked it, and we put it in there because it just feels right in its raw state. We just cleaned it up a little bit and then installed it.”

In one corner, an old wooden library ladder (a West Coast piece) finds a perfect companion in the painting of books on the wall above. Swanky ’70s couches pull in mid-century modern style. Shops around Clarksdale were good sources for details large and small, including the big area rug, vintage green glass table lamp, and the comfortable side chair (and custom-made ottoman to match) that’s become a favorite with visitors.

The living room’s open flow to the kitchen makes entertaining a breeze. There the cobalt blue Viking range adds a colorful punch, as do the bold orange Bertoia barstools and a schoolhouse orange clock. “I like colors to exude energy,” the owner says.

The rest of the appliances throughout the kitchen are also from Viking in Greenwood—part of the project’s commitment to using local and Mississippi merchants and tradespeople.

Old doors from a Cleveland salvage yard got new life, helping create a pantry and a kitchen closet for the water heater and electrical. Their rustic charm is a good fit with all that brick. Soapstone countertops and a farmhouse sink fit right in, too, and a Stan Street painting of a blues musician brings it all back home to Clarksdale.

In creating bedrooms and bathrooms, Kelly used all the original doors she could that were on-site, in keeping with the building’s period feel. “I did not put one brand new door in there. Even if I had to get them from somewhere else, I wanted to use old doors, to keep that theme going.

“The materials helped dictate the feel of each room,” to accent the building’s inherent highlights, she says. The expanse of brick is a star feature in the master bedroom, for a timeless, masculine feel warmed by reclaimed wood floors and furnishings.

In other bedrooms, select pieces anchor the space, and clean lines have a fresh, universal appeal that lets the setting shine. In one, pink accents on the pillows and rug are a shoutout to the building’s heritage, as is the subtle pink hue of the atrium’s fountain (nonfunctioning, but with plenty of visual appeal). “I always like to keep it a little fun and add little splashes of pink here and there,” Kelly says. 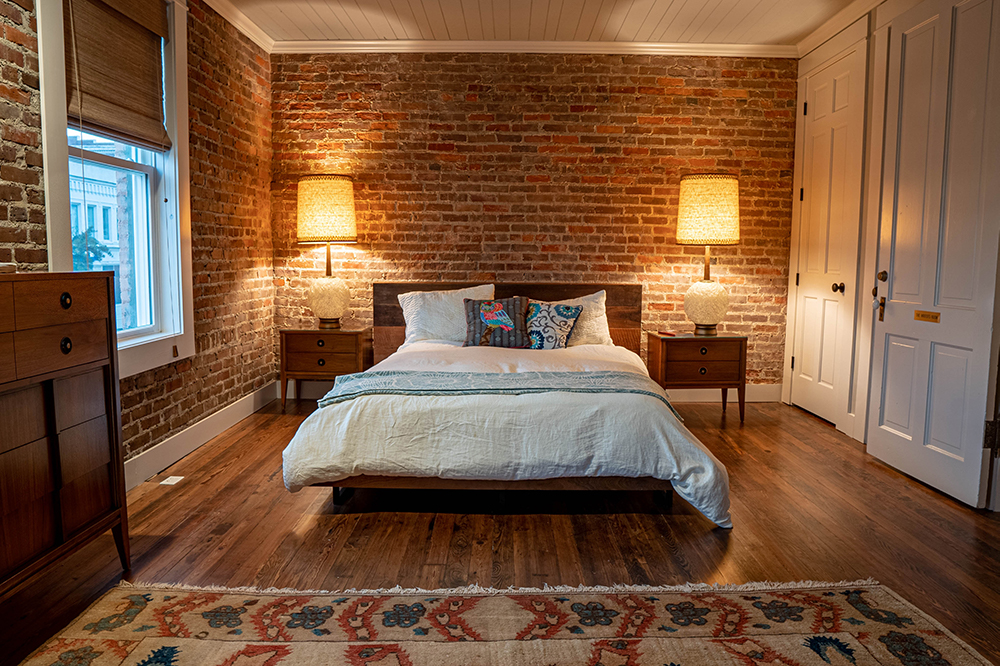 A sitting area off the atrium tucks under the balcony. There, a timber trolley turned coffee table lends industrial flair as well as a West Coast nod—it came from an Oregon lumberyard. The room’s sleeper sofa, full bath, and closet can make the space pull double duty as a fourth bedroom, plenty private with the other bedrooms upstairs. A chicken couple strutting across the wall above the sofa is guaranteed to start a smile.

On the side of the house, reclaimed cypress barn doors open out to the courtyard shared with Hooker Grocer + Eatery. The restaurant and bar’s decor maintains its farmhouse integrity in the wood floors, lazy ceiling fans, and the original wood slat walls. “They have texture. They have a story. They have warmth,” Kelly says.

A pergola, fire pits, and heaters extend the season for outdoor enjoyment. The casual atmosphere and tasty menu have been well-received in the city and across the Delta—a success the owner credits to chef/general manager Johnny Cass, chef Jay Brennan, and the great team that supports them.

It’s a destination for dining, events, and weekly live music for an international array of tourists as well as the folks right next door.