Shaped by a love of nature, family, and  a few trips around the globe, Memphis artist Betsy Brackin Burch’s landscapes explore expressionistic style. 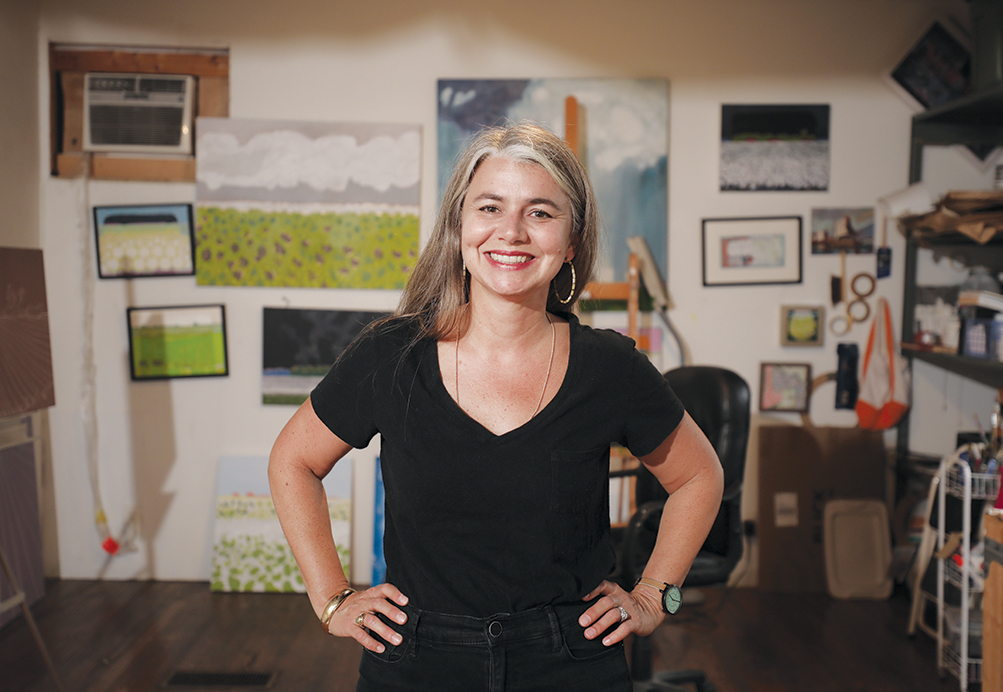 “Ever since I was a child, nature has always been my main source of inspiration,” explains Memphis artist Betsy Brackin Burch.

Raised in West Memphis, Burch recalls feeling close to the land–even as a young child—spending time on her grandfather’s farm near Osceola, Arkansas and innumerable hours walking with her dad, brother and dogs looking for quail, doves, deer and ducks. But time spent at her family’s cabin at Horseshoe Lake in a tiny lake community in Arkansas, may have had the most impact, where the sunsets, the birds. and the wildlife helped shaped her love of the outdoors. “My family has a small fishing cabin there that we absolutely love. This oxbow lake has inspired my work for years,” said Burch.

That childhood inspiration in the Arkansas Delta is part of helped Burch evolve into a successful professional artist. In fact, she is known to some as “Arkansas Betsy”.

Betsy says painting has always been her chosen medium–but sometimes she feels that painting chose her.  “There wasn’t much in the way of art lessons offered in West Memphis schools at that time. But a lady in Marion by the name of Sally Ware taught adult art lessons and luckily let me join her class. I was just naturally drawn to painting and did very little else in the way of extracurricular activities when I was young,” she explains.

Burch graduated from West Memphis High School in 1995 and earned a scholarship to Savannah College of Art and Design where she attended for a couple of years, but eventually made her way back to Memphis. She graduated from the Memphis College of Art with a BFA in 2000. “While I was in college, I lived in a cabin at Horseshoe Lake. It’s only about forty minutes from Memphis and I am still a part of that community to this day,” says Burch.

After college, Burch’s career took a circuitous route. Years were spent doing whatever was necessary to get by as a creative person, to stay dedicated to her painting, and to see and explore the world. She took advantage of every opportunity to travel. “I knew it would expand my perspective as well as influence my art career.”

Betsy has lived in many places and traveled the world, visiting Europe, living and painting in Italy, and spending five summers in Greece. She also spent time in “the Land Down Under”– New Zealand–where the landscape is “breathtaking and like no other.” All along, Betsy worked odd jobs to support her art.

Her work history could only be described as eclectic. She has worked as a high-end wood finisher, decorative painter, waitress, bartender, nanny and dog sitter. She has been a caretaker of a mountain chalet, sold fruit on the beach, and worked the desk at the Shack Up Inn, the blues-themed hotel in Clarksdale. She’s painted houses, changed spark plugs, and washed boats. She has even worked as a roofer! 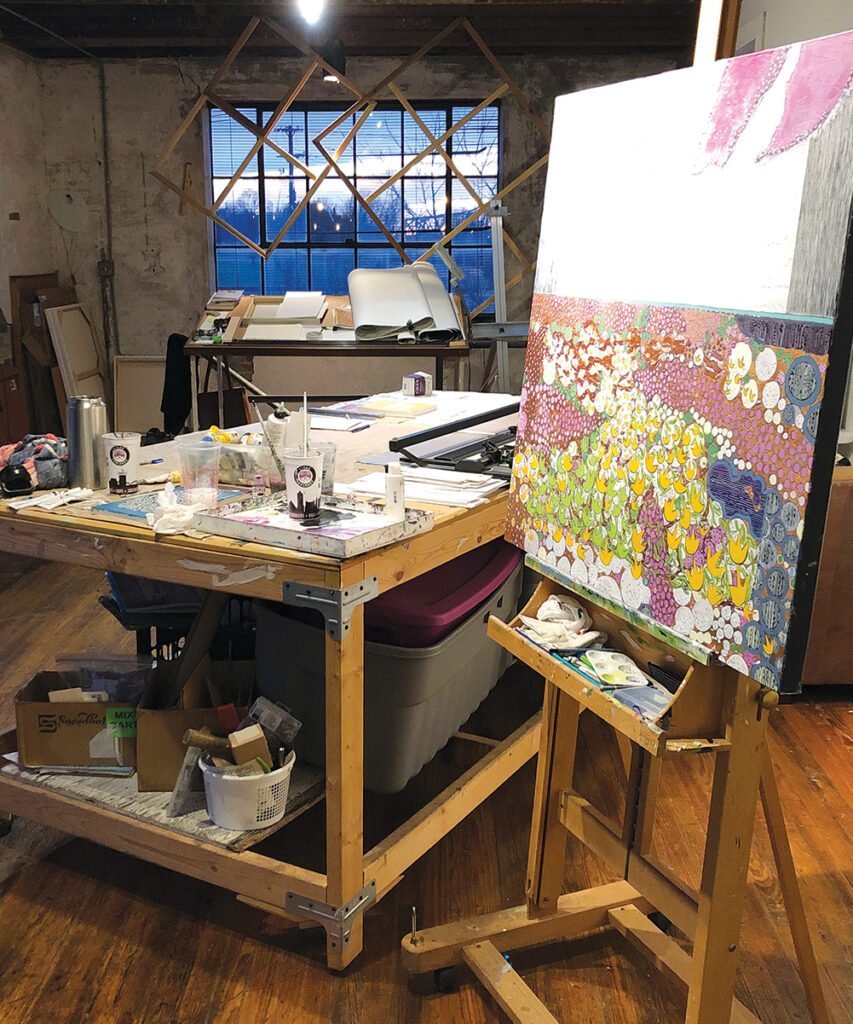 All along, Betsy gathered insight to later express on canvas with the strokes of her brush.

The American south eventually called her back home. Fast-forward to today—Burch currently works out of a studio in the Medicine Factory in downtown Memphis, and she has had numerous shows in Memphis, Arkansas, and Mississippi over the past two decades.

“Painting in my studio and outside is when I feel most like myself.”  She loves to sit still and closely observe the landscape.

She has spent years gaining “dirt road inspiration” from Mid-South roads less traveled. Watercolors and acrylics in tow, she explores country roads in surrounding counties, often hauling out her supplies and setting up an easel right on the side of the road. Fittingly, she describes her art as “landscape painting that explores the expressionistic style.”

About eight years ago, she became reacquainted with longtime friend Brown Burch at an art event on a farm in Arkansas. 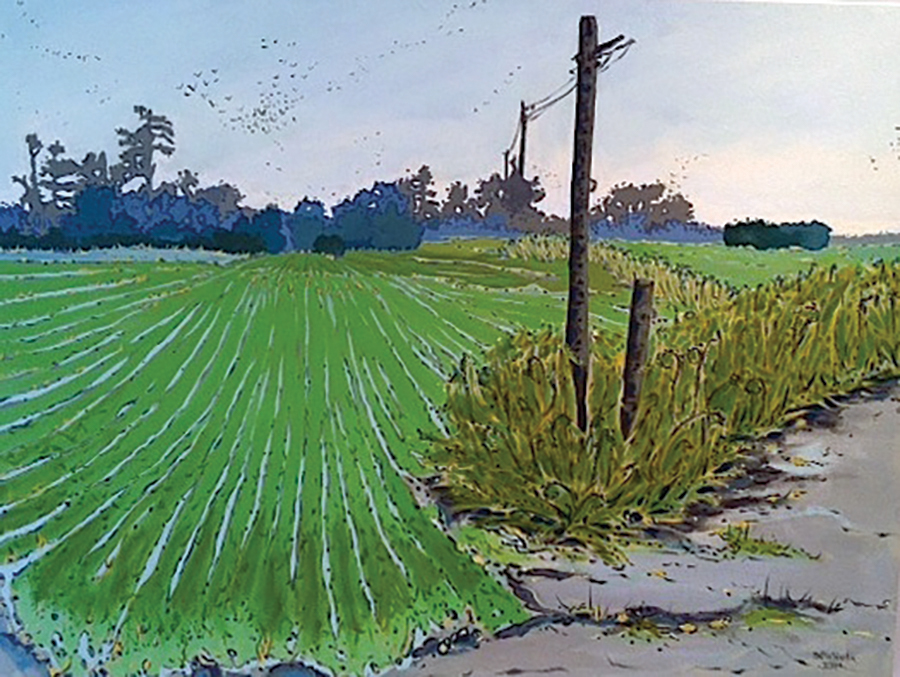 Brown is a self-taught, professional, private chef who has worked in restaurants all over the world himself. The two had much in common: their creativity, love of nature, and both had ties to Horseshoe Lake. “Brown’s father, who recently passed away, was friends with my mom years ago and he was from the Horseshoe Lake area. Something that attracted us to each other is we both have roots in this part of the Delta and a love of Horseshoe.” They realized they had the right ingredients to make things work and decided to settle down and get married. Luckily, living with an artist was nothing new for Brown—he comes from a family of artists, including his mother, grandmother and sister.

Life experiences have continued to shape Betsy’s evolving creativity. The arrival of their daughter, Lucille, now age 5, brought new perspective; it was a time to take a break from her art and experience all the love, emotion and challenges a new baby brings. But shortly thereafter, just five weeks after Lucille was born, there was an unforeseen turn of events when she lost her mother suddenly. “It was such an indescribable time—to be so filled with love on one hand but completely heartbroken on the other. My mother was my greatest supporter, and I still feel her encouragement.”

Betsy and her siblings—sister Lucie is an attorney in Memphis, and brother Sam, a farmer—are very close, and together, they rallied after the tremendous blow. “We lost our biggest cheerleader when our mom passed away. Now we are each other’s,” she explains.

Burch’s southern heritage and culture continue to be woven into her soul and expressed in her artwork. The inequality she has observed in her lifetime, not just in the South but also all over the world, has made an impact. As a child, she was moved by segregated schools and neighborhoods and by the realization that some of the adults she knew in the black community couldn’t read or write.

Working as a part-time mail carrier in rural Arkansas gave her insight. “I witnessed the extreme poverty that exists in our country. An awakening happened within me, and it was through my artwork that I was best able to grapple with and articulate the complex emotions I was experiencing.”

“My use of deep blues and grays represent the emotionally heavy history that lingers in the south; and for contrast, I employ a softer color palette to turn the dark history of the Delta on its head. It’s through this use of color that I want to highlight the subtle beauty and vibrancy that is present in the landscape, despite the dark history.”

Betsy was shaped by the generations that came before her and she hopes to pass a part of herself forward as well—through her art and in motherhood. “I am raising my daughter to be a creative free spirit,” she says, and in her opinion, Lucille is her most beautiful creation.  Although Betsy no longer has the freedom to roam quite as she once did, she’s honoring her family tradition by exploring the fields and nature with Lucille, and as they look for wildlife together, Betsy teaches her not to just look at the land, but to see it as an artist.

Betsy is currently taking commission work and is working about a year out. She is represented by The George Gallery in Charleston, South Carolina. georgegalleryart.com. Her website is www.betsybrackin.com. 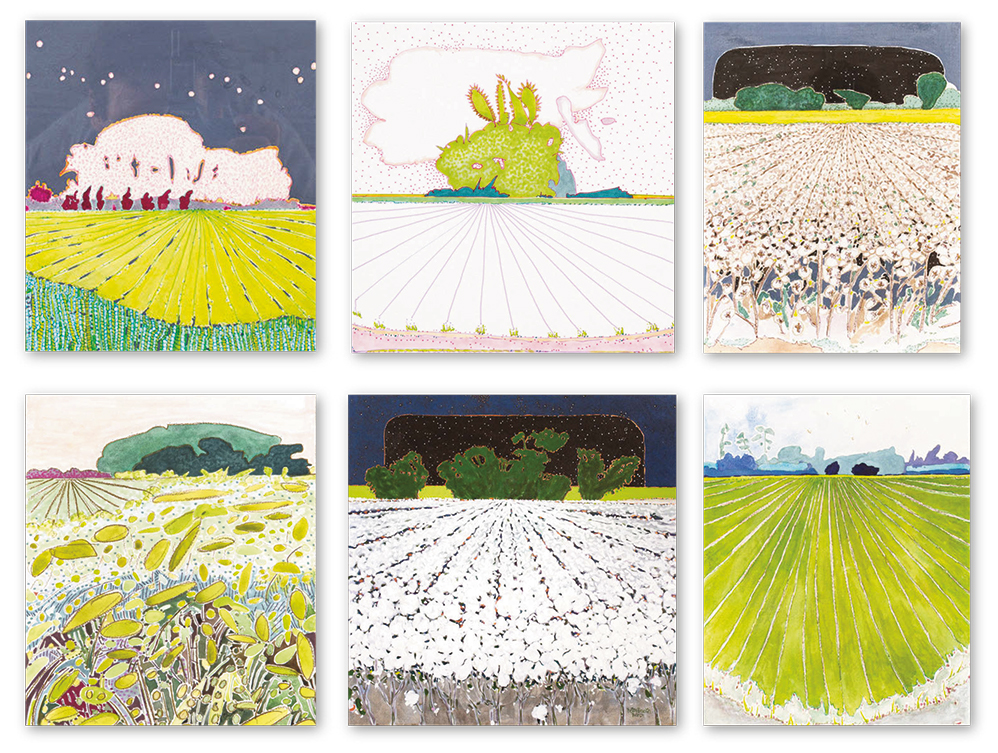