When William Bristow wakes up in the morning, he may not know the exact details of the day’s schedule, “but I bet it involves water and a jon boat,” he says.

He’s kidding, but only a little. The tan line made by his wristwatch marks days spent in boats and waders, documenting Mississippi Delta backwater flooding in the South Delta.  The disaster put over 500,000 acres of farmland and homes underwater for almost six months delivering a catastrophic blow to residents’ lives, farmers’ crops and area wildlife.

“If It Keeps Rainin’,” Bristow’s Mississippi flood film currently in production with his brother, Carson, and wife, Cara, aims to raise awareness about a disaster that’s gotten scant national media attention, and to unite the state’s broader community to help.

William is the film’s writer, director, cinematographer and editor. Carson takes on research, sound editing and sound design, and Cara is also a researcher, as well as producer, art designer and social media manager. The trio, all in their 20s, live in Brandon. The brothers bring a storytelling slant steeped in Southern culture and honed over childhood summers at the North Mississippi Hill Country Picnic and their old blues band, The Stonecoats.

“We got introduced to that very young, so we grew up in the blues and so much of that is story-driven — the struggle and the conflict,” says. 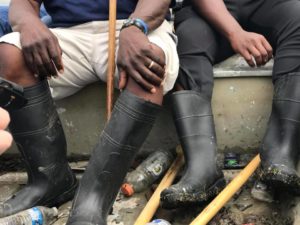 He came to the flooding topic last March, when young farmer and former classmate Jon Barrentine in Rolling Fork texted to catch up. Scheduling would be easy; his pal wasn’t working. “I guess, just being nosy … I said, ‘Well, I hope everything’s OK. Why aren’t you working?’

“He said, ‘Everything’s flooded. There’s, like, 500,000 acres of land underwater.’ I just couldn’t believe it,” says William, stunned he hadn’t seen it on the news. He had to go see.

With camera and drone in tow, he caught up with his friend over lunch at Chuck’s in Rolling Fork, then spent the rest of the day riding around to see the water and hear about its ripples of impact — no crops, no paychecks, no purchases large or small.

He cut together footage from the drone and his friend’s remarks for a Facebook post. “In the course of a few days, it got over 40,000 views,” with people’s comments echoing his own: “What? I can’t believe this!” Suggestions poured in for more people to reach out to, plus encouragement to pursue the story. His film and storytelling background kicked into gear, and the Bristows followed the flooding story where it took them, from farmers to long-time residents, watching the ruin of all they own.

“It’s amazing how, every contact you meet, you get five more.” says Carson. 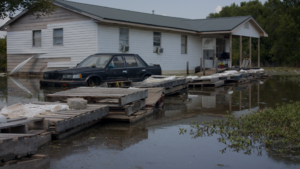 Carson sees a recurring theme in the way flood sufferers hedge their losses against that of others. “It’s never, like, ‘We have it the worst.’” In those words, filmmakers hear the unity and resilience of community, concern for neighbors and the realization that things could be worse. They see, too, the appreciation that, even as national media swoop in to cover the daylights out of Hurricane Barry, someone is telling their story as the Delta’s crippling flooding was creeping past the half-year mark.

William thinks of a family who sank all their savings into a retirement home at Eagle Lake that’s now underwater. “The man who was taking us to show us, he’s a rough-and-tumble kind of guy. The first time I met him, he was literally throwing sandbags through the air to prevent someone’s yard from washing away. He’s walking us through it, and he has to turn away from the camera because he starts crying his eyes out.” Hitting him hard, William says, was the way inmates came out daily, with only the incentive of two days off their sentence, to help sandbag miles of walls. “To see men who have been broken, and who a lot of people would write off at this point, contribute to society, and feel like they’re doing that, just really spoke to him.

“You see this big climactic moment where the community there has never come together like this. They’ve built this sandbag wall, they kept the water back. The next day, a storm comes through and knocks that sandbag wall down. And all the 3, 4 feet of water that this wall is holding back … they watch it in real time, wash people’s homes into the water.”

Another man took them through his house, on land in the family since before the Great Mississippi Flood of 1927. He didn’t own much, he’d told William, but that land and house were home, and he didn’t plan on going anywhere. He’d walked through the house and the water, on crutches because of a disability, past water marks from the ’73 backwater flood and here it was happening again. But the words he’d shared were, “Man, it’s a good time to be alive, I’m so blessed.” “It just puts things into perspective,” says William — the humanity that prevails in the midst of crisis. 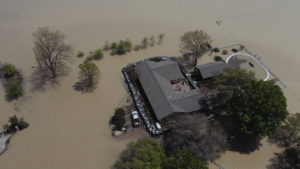 The Bristows hope “If It Keeps Rainin’” will highlight the situation in the Mississippi Delta, coalescing the conversation of all the parties — residential and business, government, environmental and more — and help move toward a solution. They want viewers to see beyond the controversy of the Yazoo Backwater Pump Project and its politics, and meet the people behind this struggle.

“Our goal here is to deliver a story and to see some form of action taking effect” for the Delta, Carson says.

Their work since March has been self-funded, but next steps include grant applications, a rough cut of the documentary for pitching to potential Mississippi-focused investors, and crowdsource funding on seedandspark.com as the last phase this fall.

The storytellers now await the narrative’s third act — as the floodwaters go away, people assess their lives and losses and try re-establish themselves in affected communities, through work and rebuilding, or not. “Really, the timeline for that is whenever the water goes down,” William says, “so we’re dedicated to that throughout this.”

With expectations for the water to recede in fall, their rough estimate targets early 2020 for the documentary’s finish, with an eye, too, on a distribution push for next year’s film festivals. “We’re going to try as hard as we can to make those deadlines and work as quickly as we can, in order to not only get this out there, but to get attention to the Delta,” Cara says. They hope to screen it around the state, too, if possible.

Find out more about “If It Keeps Rainin’” at msfloodfilm.online, and keep up with developments on social media @MSFloodFilm on Twitter and Facebook.

Like the Bristows, Carter Mascagni’s radar also went off after he was alerted about the flood.

Mascagni is president/owner of the Flora-based HabCo LLC, a habitat improvement company that designs and enhances hunting tracts. Viewer input through Habco’s social media platforms helps the company make decisions on farms and more, so when videos and photos of flooded homes kept cropping up, Mascagni had to see for himself.

“I live in Flora, I had no clue. We just decided to pack up our film crew and head over there,” Mascagni says. “It just blew our minds, what was going on.” 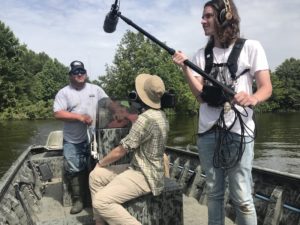 In the RV that serves as HabCo’s mobile office, they started in Valley Park and made their way to Onward. “We just parked on the side of the road and started filming,” he says. “The community just kind of took us in.” They met with leaders in Rolling Fork at Chuck’s, the community’s hub, and were struck by the challenges of the longstanding floodwaters and the unity of people rallying to tackle them.

“We went there for the wildlife, and went home with a story that will blow people’s minds.”

HabCo partnered with Nature’s Eye Media to expand its coverage and is producing “The Forgotten Flood,” a series of short documentary videos, to share that story, with the first released in August. “The Forgotten Flood” can be seen on HabCo’s website habcoms.com and its social media platforms — @habcoms on Instagram and Facebook and its HABCO LLC YouTube page.

“We’re going to stay with that community throughout the winter, … stay with the herd and update viewers,” he says, anticipating followup videos every few weeks. “The Forgotten Flood” installments will highlight the situation and needs, give voice to the people pulling together to survive, and remind viewers what’s at stake.

“We can’t wait on our government to provide relief,” Mascagni says, and though that’s needed, “We have to act now, and the only way to act now is our citizens and hunters to come together and get their pocketbooks out and do it together.

“If our community of citizens and hunters … don’t come together and help, there’s a possibility we could lose the town of Rolling Fork, and lose farmers.” Even as floodwaters go down, there’s not enough time to build up vegetation that would provide wintertime forage.

In tandem with the documentary series to raise awareness and relief for flood victims and wildlife, HabCo is mounting a seed campaign to raise funds for farmers to plant cover crops to add nutrients to the soil and help the herd. “Donate a bag of seed for cover crops to protect Mississippi Delta farmland and provide a critical food source for displaced wildlife.

“The farmers are … key to conservation. If we lose them, we’re going to lose in every category of wildlife.

“Our goal is two things,” Mascagni says, “save our farmers and save our herds.”

Donations may be made to Community Foundation of Washington County; 342 Washington Ave., Suite 201; Greenville, MS 38701; the notation South Delta HabCo Disaster Recovery Fund directs the contribution to the seed campaign.