Easy Living On The Bogue

They didn’t set out to do much, at first, but as the workmen were already there…well, a whole new house happened! 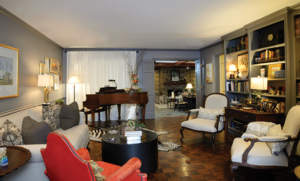 At first, the plan was simply to renovate the kitchen, update the master bath, and add a closet, according to this Gunnison couple. At least, that was the modest idea they had in mind at the outset. But, as so often happens in cases like this, one thing led to another. When it was done, the “before” and “after” shots tell a story of a love affair with a chosen dwelling. Although this house looks and lives like a luxury vacation home, the owners live there year-round, relishing country life indoors and out. In fact, thanks to the crowning touch, a partially screened outdoor porch, they can enjoy both at once. 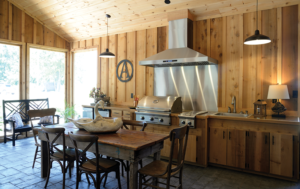 The house, clad in aged redwood, is situated on a 13-acre property, which had formerly been a quail farm that shipped all over the country. After purchasing the property three years ago, the couple removed several buildings that had housed the hatcheries, and proceeded to make the three-bedroom house their own: rearranging rooms, adding their treasured pieces new and old, and making sure that plenty of family history was on display.

“We had been living at my husband’s hunting club, nearby, but after the last flood, we decided to move to the other side of the levee,” says this wife of an avid hunter, whose trophies festoon the walls of this 4,500-square-foot dwelling. In addition to local deer, there are many exotic trophies, and skins on the floor, that the couple acquired during hunting safaris in Africa. Their trips to Zimbabwe and Mozambique yielded heads and pelts of Cape buffalo, duiker, wildebeest, leopard, and zebra, just to name a few.

The single-level house is entered from the front porch, through a gracious foyer furnished with an antique secretary and 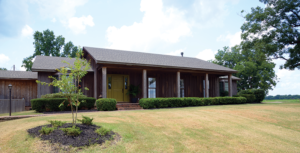 chest. The view straight ahead is of the new library, formerly the dining room. Flowing naturally from the library via a wide cased opening, the den features a stone fireplace flanked by French doors. A coffered, beamed ceiling and random-laid slate flooring lend gravitas. Off the den is another Delta must-have: a paneled “man cave” filled with evidence of many a successful hunt at home and abroad. 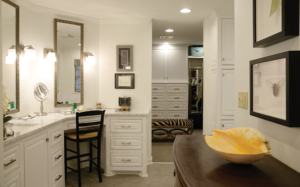 To the right of the entry hall is the dining room, which the prior owners had used as the living room, and to the left is the spacious master bedroom, the original focus of the renovation. This suite now boasts an all-new, expanded bath, dressing area, and luxury closet. Yet another vintage mahogany chest in the vanity area is topped by two of her favorite collectibles: a cicada and a giant six-inch-long katydid, preserved in shadow boxes. Quirky grace notes like this are what make exploring the place so intriguing to visitors.

Collections abound in these rooms: tortoise shells, ivory, and antique cut glass among them. But it is their art that gives 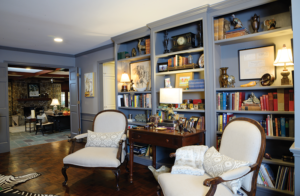 them the most pleasure on a daily basis. “We have collected works from several Mississippi artists over the years.  We really enjoy this, and our guiding principle is that we only buy what truly speaks to us,” she claims. “I love to walk though my house and see art that makes me happy.”  She reels off a long list of favorites: Gerald Deloach, Duff Dorrough, Pryor Buford, Bill Jackson, Rick Anderson, Tommy Goodman, Terry Simmons, Chesley Pearman, Andy Roberson, Carolyn Norris, Jamie Tate, JoBeth Janoush, Cetin Oguz.  But perhaps prized above any other work is a painting done by the late, legendary Lee McCarty, best known for his pottery. “We were so pleased to have found this piece at an auction, just before he passed away,” she recalls. It goes without saying that many McCarty pottery pieces have found their way into the couple’s décor, as well.

“We turned the old dining room into a large library with custom bookshelves,” she says, “and this is the room where lots of our family memorabilia is on display.” On the walls are framed letterheads from businesses owned by her grandparents and great-grandparents, photographs of their stores in Indianola, and wedding invitations from both sets of grandparents.  From her husband’s side there is an antique writing table that once belonged to his great-grandparents, and filling the shelves are many vintage books from both sides of the family. “Trying to ‘marry’ both our styles was made easier by using all these family pieces,” she claims, “and along with our art pieces that we have loved acquiring, it’s what makes the house belong uniquely to us.”

The kitchen, which was another of the initial projects that led to the total re-do, is now a sleekly functional, all-white workspace that also offers bar seating allowing family and friends to visit with the chef. Above the sink, a small “treeline” landscape painted by Pryor Buford Lampton brings the outdoors in.

But when the weather is just right, the place everyone wants to be is what many consider the very best part of the home: the enormous, newly-added outdoor porch, with a screened wall along the rear façade.  The owners pulled out all the stops for this show-stopping entertaining space, which includes a fireplace surrounded by ample seating, and a fully-equipped kitchen featuring a stainless gas grill, sink, fridge, and icemaker, all set into a luminous copper countertop along the righthand wall. More family history is found in the dining table, which was once in his grandfather’s country store nearby.

Through the wall of screen, there is a view of the bogue beyond the patio. The dictionary defines “bogue” as a “bayou, stream, or waterway,” but the owners define this one as a prime place to view the abundant wildlife in the region: turkey, waterfowl, and of course, deer.

The couple certainly made many changes, gutting the kitchen, stripping old wallpaper and painting every room, refinishing the hardwood flooring, re-tiling all bathrooms. But one of the most interesting changes is the one they decided not to make: tearing down a very old barn and shop in front of the house. “Over time, we have grown to love the character it adds,” she notes.

“Everyone who spends time on the other side of the levee says that once you go over the levee all the problems stay on this side, and that there are no problems on the other side,” she concludes. “We feel the same way about this house.  We cannot wait to get home each day to enjoy our place. I guess you are never really finished with your home; it keeps evolving.  We look forward to where it will lead!”