End of an Era

After a century, Lusco’s was more than just Greenwood’s oldest restaurant—for many, it was the centerpiece of family celebrations and rites of passage 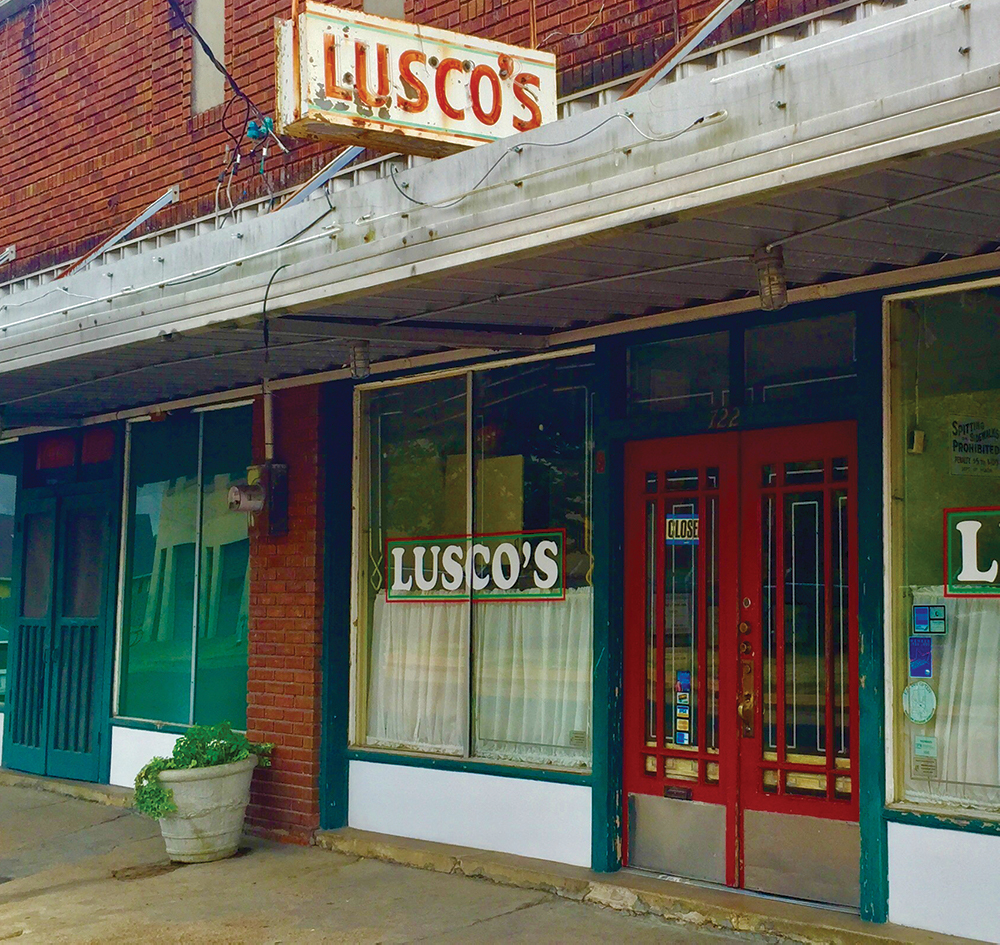 They came by the dozens. Gathering by the front door of a beloved restaurant that was established long before many of them were born, friends old and new shared stories, posed for photos, and exclaimed, “You have to get the pompano!”

Dressed to the nines and carrying in their own wine or liquor hidden in brown paper bags, there was an almost tangible current in the air; the emotional weight of the last Friday night at Lusco’s was palpable. The evening held all the trappings of a family reunion, farewell party, and an old Southern funeral combined. Everyone seemed to know each other, and those that didn’t were quickly acquainted.

There was talk about the time ZZ Top came for dinner. And who could forget the night a popular TV show host was accidentally turned away, so hostess-turned-waitress Marshell Boyd tracked him down at another restaurant and lured him back? Then, to the bemusement of his wife, at least one customer offered to buy the stuffed, hat-wearing squirrel with a cigarette in its mouth; he’s guarded the lobby for as long as anyone can remember. And the memories, well, they do go back a ways.

There were tears, too, of course. Standing over her famed salads, complete with anchovies and homemade dressing, owner Karen Pinkston choked up at the thought of not seeing her beloved customers every day. Longtime waitress Iris Ezell, who was recently voted Best Waitress in Greenwood, questioned how she’ll spend her Friday nights now that she’ll no longer be working with people who have become like family.

Wearing a tuxedo and cummerbund, Lusco’s regular Johnny Jennings walked from booth to booth, remarking over and over, “It’s like the Beatles have broken up.” Jennings and his fellow diners had dressed for the occasion. It was only fitting, after all.

For those unfamiliar with the famed Greenwood establishment—and those are undoubtedly as few and far between as the long Delta miles—Lusco’s has been the cornerstone of the community for one hundred years.

But you’d be hard-pressed to find someone who’s never heard of Lusco’s. They come from near and far, as evidenced on the wall. Dozens of snapshots, autographed headshots, and yellowed newspaper articles proclaim what everyone who has entered those hallowed booths knows: there’s no place on Earth like Lusco’s.

Charles and Marie Lusco immigrated from Italy to the United States in the early 1900s. By the 1920s, they and their three children had settled in the Mississippi Delta. They opened Lusco’s in Greenwood in 1921 as a grocery store and restaurant. It burned in 1929, and the restaurant was closed for several years until it reopened in 1933 on Carrollton Avenue. It has changed hands through the generations but always remained in the family, passed down like the cherished recipes.

Then in 1981, fresh off of being newlyweds, Andy and Karen Pinkston took the helm. For years, Karen was at the front of the restaurant, and Andy manned the kitchen in the back. She’ll tell you she’s not that great with names but has a Rolodex filled with years of orders in her mind. So if you went to Lusco’s once, chances are Karen knew your order the next time you walked in the door.

In a way, an evening at Lusco’s is like stepping back in time to a place where dinner was an event and men stood when women left the table. As time has a way of doing, the neighborhood has softened a bit, worn at the edges. Inside, among the many mounted animals, hangs a deer head equipped with a red light zip-tied to his nose from a season long-ago past. A pad of butter is still stuck to the ceiling above booth sixteen, an ancient reminder of when that used to be the fad for those feeling especially adventurous. And, if you’ve been to the men’s room, you know about the mound of discarded oyster shells just outside. An old curio holds the glassware and a piano with the keys worn to the wood sits quietly against the wall. As for the walls, well, paint chips in places and wallpaper is peeling in parts. But if anything, it adds to the ambiance. (The phrase “if walls could talk” was surely invented for a place such as this.) Inside the curtained-off booths, the tables are set with candles and white tablecloths, but the food is all anyone is really paying attention to. 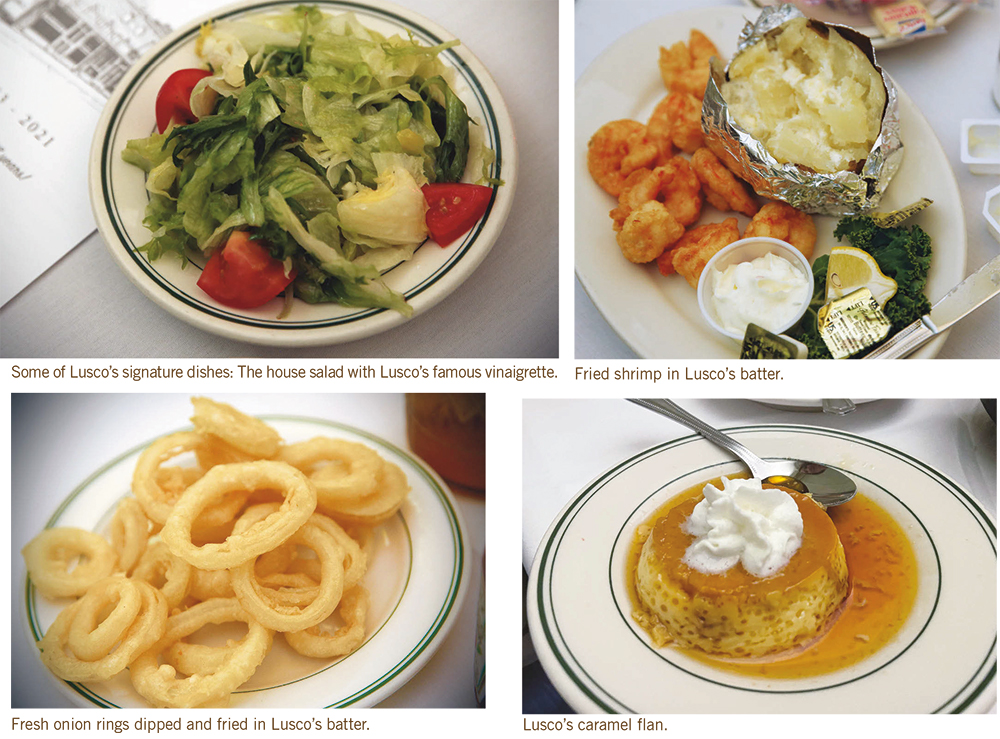 And on Friday night, the food didn’t stop coming. Wheeled out on carts by the dedicated wait staff, the heavenly smell of shrimp—there’s no other word but heavenly—sitting in a bath of butter and spices lingered in your nose long after it had been whisked away. Plates and plates of onion rings rolled out the kitchen door; by 8:30, the kitchen had sold out.

Snippets of conversation wafted over the curtained booths:

“…The most beautiful girl in Tchula.”

“Is there a Presbyterian meeting in here?”

And when taking a photo: “Women lift and separate; men suck in.”

Over the sound of laughter and storytelling came the scraping and rattling of empty plates; not a single pushed-away plate returned to the kitchen with an ounce of food. When the meal was finished, folks seemed to linger, not quite ready to bid farewell to the old mainstay.

It meant so much to so many. 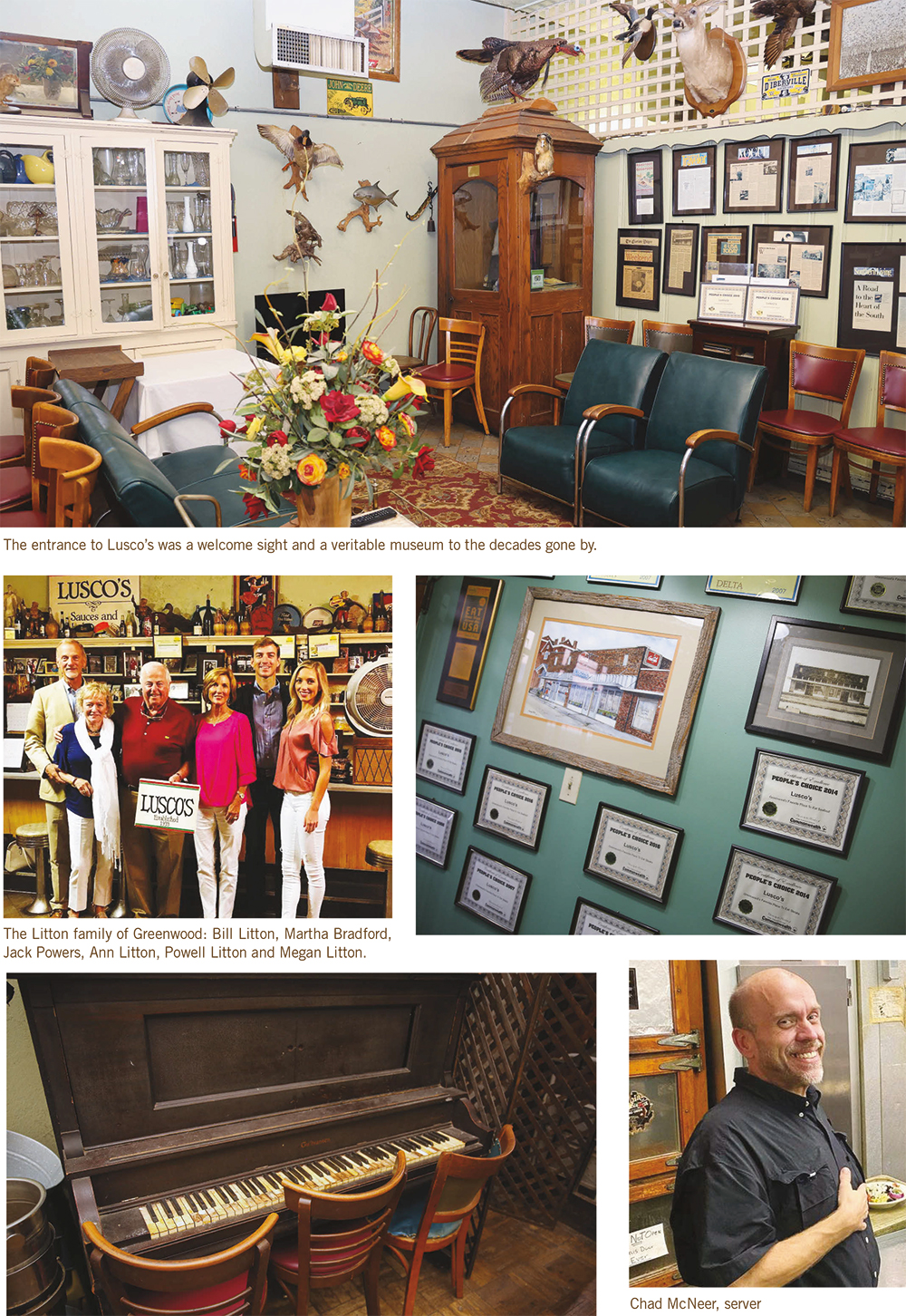 Susie and Jim Tackett, of Greenwood, walked in Friday night, and barely in the lobby, Susie was asking if the pompano was on the night’s menu. Between the two, they rattled off half of the menu, the fried chicken, hot shrimp, the E’s crabmeat salad; there’s not a dish they haven’t tried.

Jim Tackett has been frequenting Lusco’s for forty years and has the stories to match—from throwing butter on the ceiling to folks who get deep into their libations and wander around the restaurant popping their heads over the booths of fellow diners.

“It’s just part of the old history,” he said.

When she heard Lusco’s was closing, Susie made reservations for the last three weekends in a row, trying to experience as much of Lusco’s as she could before it closed its doors. Friday night, when they were joined by their children, Allie and Walker Culver of Madison, Susie said she was tempted to order one of everything. She’ll miss the food, of course, but the atmosphere, she said, is truly something special.

Walker Culver chimed in, saying, “Everybody wants to go to Lusco’s.” 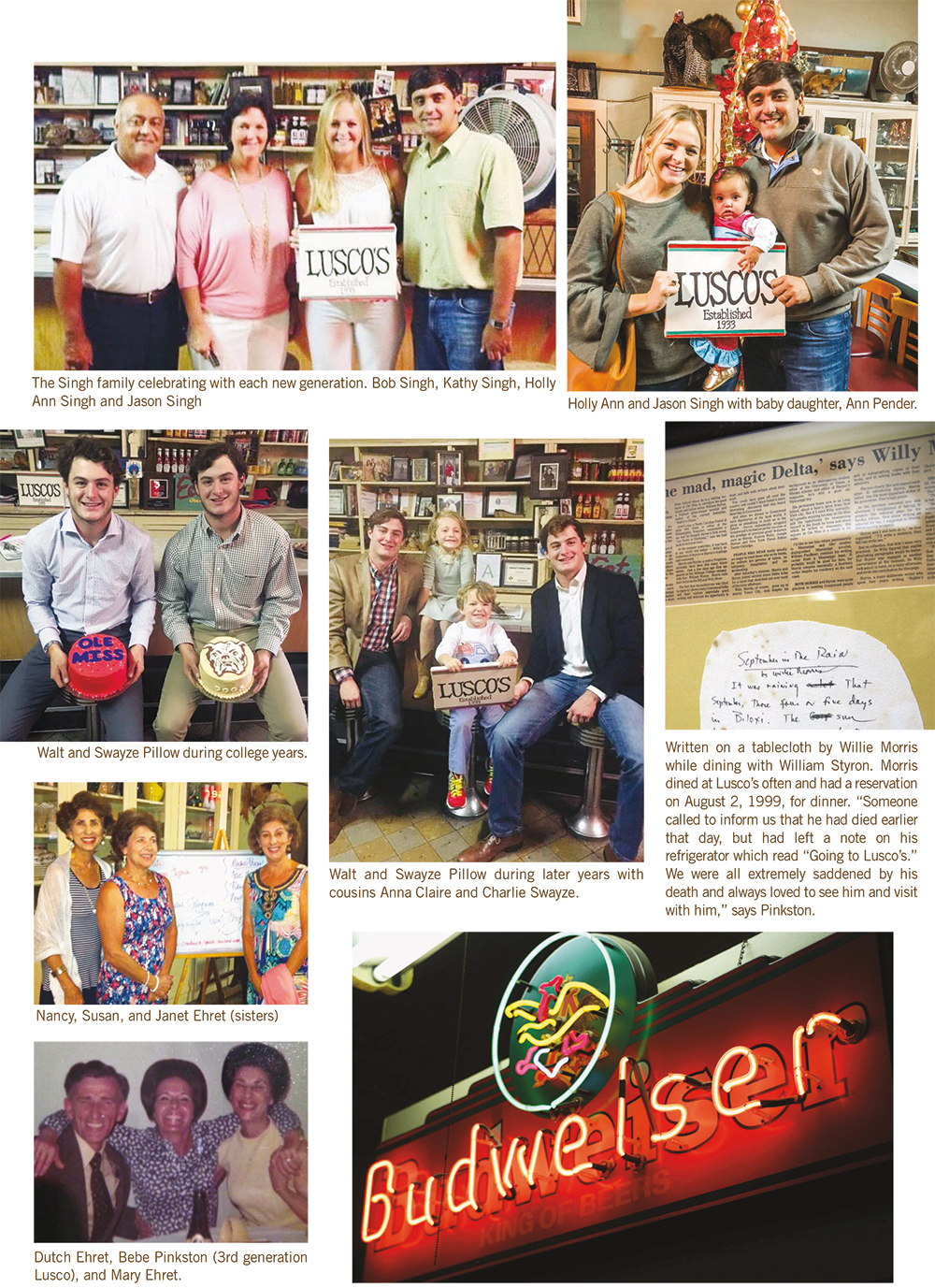 Bryan Jones recalled a story from years ago when he and his wife, Sara Jones, came to Lusco’s to celebrate her birthday. Sara, who refuted parts of Bryan’s story, started crying when she was told the pompano wasn’t available that night. But their waiter went to the back, talked to Andy, and he cleaned and cooked the fish just for her.

The Jones were joined by Don Barrett, and the men wore coats and ties “because that’s what our parents would have done.”

“I almost cried thinking about this,” Barrett said. “I ate here when I was four years old, that was 1949. I’ve been coming here all my life. This is the place to come for people here in the Delta.”

Barrett recalled being a little boy and his parents giving him nickels to shoot a mechanical bear that used to be in the front of the restaurant. After using up the roll, and as his parents had a “drink or two,” he would eventually wind up with ten dollars’ worth of nickels.

Laughing at the memory, Barrett then quickly grew somber.

Longtime waiter Rob McCurdy feels the same. McCurdy has been at Lusco’s for nearly twenty years on and off and can recite his regulars’ orders in a single breath. The idea of Lusco’s closing “is breaking my heart,” he said. 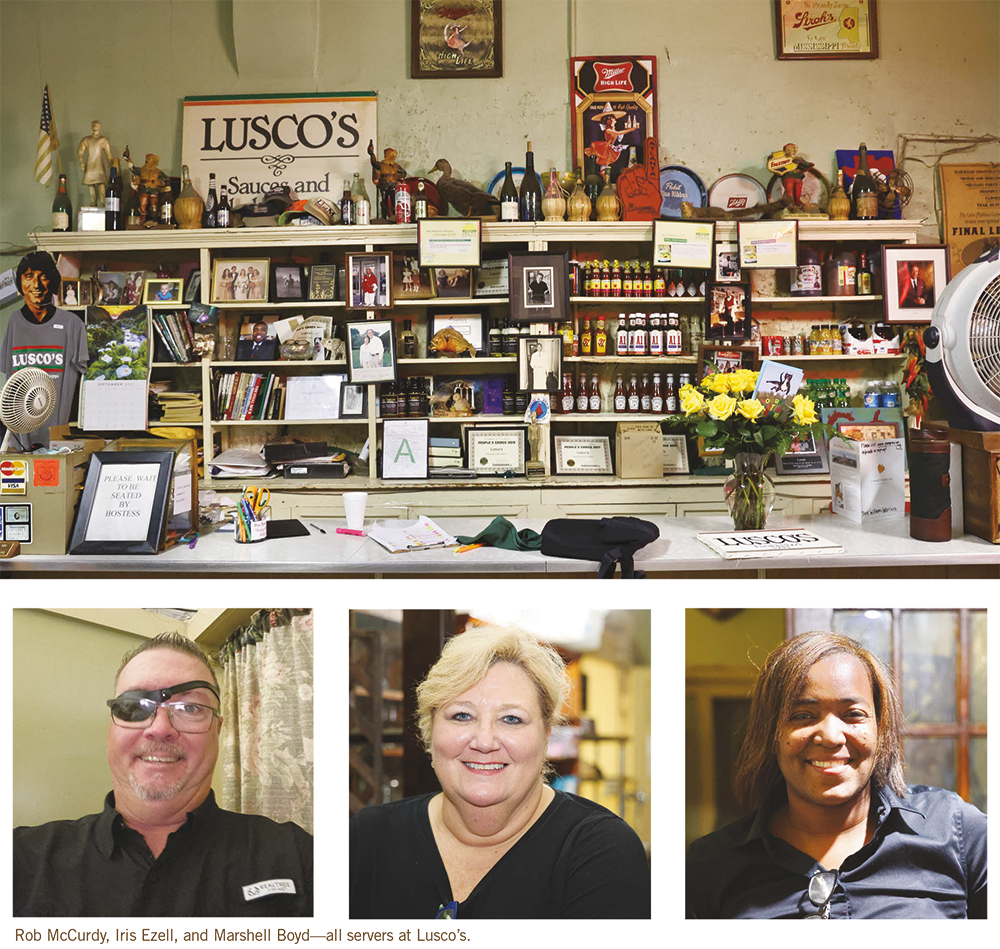 Friday night, Karen was in the bustling kitchen, too busy to stop for too long and think about what Lusco’s has meant not only for her family but for generations of families. Andy, as usual, was cooking, head down and focused. As diners passed by the kitchen, they all poked their heads in to say hello. Then they said their goodbyes.

Now, with the last customer gone, the couple turns to what’s next. They’ll still host family dinners at the restaurant in the coming months, and Karen is toying with the idea of starting a new venture, but, for now, she and Andy hope to take a well-deserved break. They started working at the restaurant in their twenties and, at sixty-eight and seventy-two, it’s been their lives ever since.

So for the people of Greenwood and the many, many years of beloved customers, she has a message of gratitude.

“It’s been everything to us. It was the lifeblood for Andy’s grandmother and his great aunt. It’s been ours as well. It’s been our livelihood; it’s been our life. It’s how people know us; it’s how we know people. It’s been a pleasure; it’s been a joy. It’s been fun, but it’s also been the hardest and most stressful thing you could have ever done. But it’s so rewarding, especially when you know that you’ve been able to make a lot of people happy.”

As Lusco’s heyday draws to a close, you’d like to hope every city has a place like this: some mom-and-pop restaurant made good, run by honest, hardworking people who take pride in their food and offer diners a reprieve from their troubles, if only for a little while. A place that celebrates life’s milestones with the generations of diners who grow up and bring their children and grandchildren to share in the traditions they cherish.

And while there may be places similar, treasured by the community they’re a part of, one would think it impossible to replicate the magic created by Karen and Andy Pinkston. They captured lightning in a bottle; describing what makes Lusco’s special is as hard to define as the Delta itself. So while the lights are turned off for now, if you listen carefully, you still may be able to hear the hum created by years of memories rising from those old booths. And while we can’t blame you for trying and failing to recreate the feel of Lusco’s at a new place, maybe keep the butter off the ceiling.