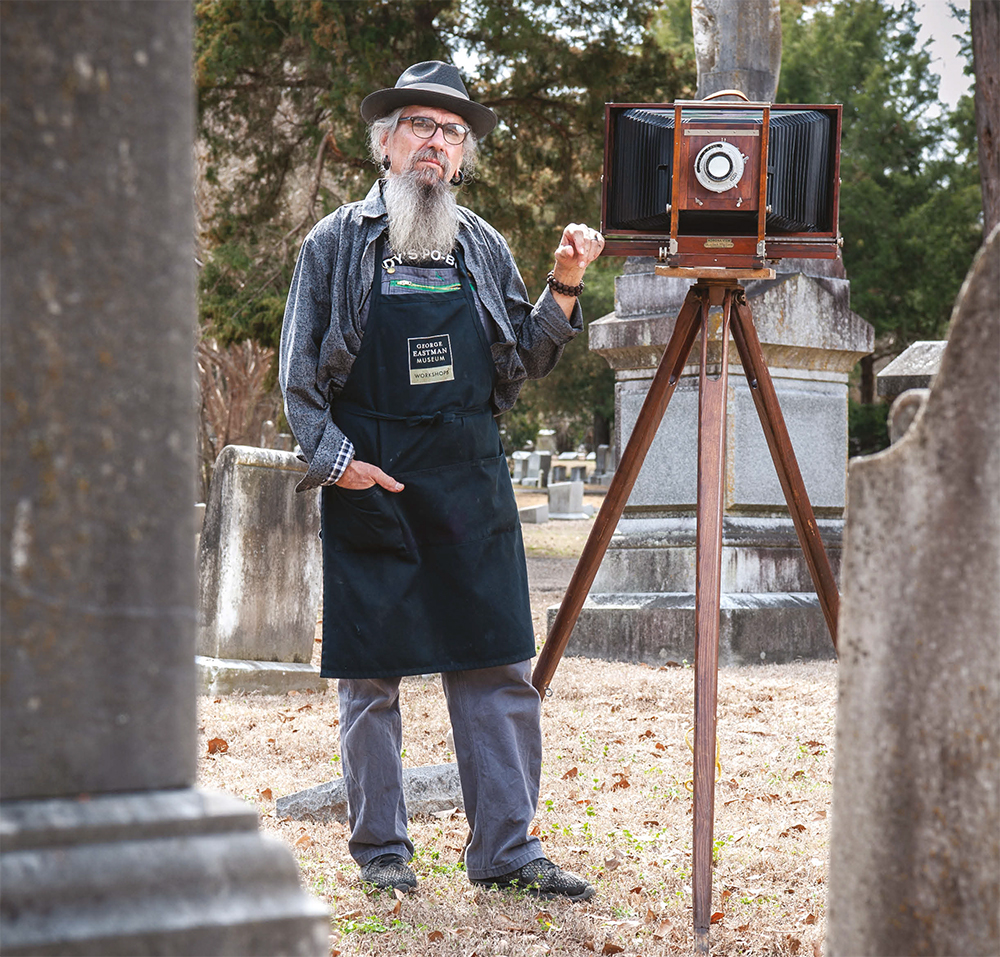 Since he was a young teen, Euphus Ruth (“Butch” to his friends) has been interested in photography. “I used to play with my Brownie camera under the living room couch,” he recalls. Later he got a Polaroid Swinger Instamatic camera, and that opened another world for the budding photographer. But when he was introduced to his friend’s thirty-five-millimeter single-lens reflex camera in high school, he began to see the bigger picture. “The high school journalism department had a darkroom, and that’s where I really learned to love photography.”

Born in 1957 in Beaumont, Texas, Ruth has lived most of his life in Greenville, Mississippi. He began tinkering with photography in the late 1980s and early 1990s, shooting black-and-white photo-graphs. He taught himself how to develop film in a darkroom, and he built one in his home. “ I shot five-by-seven-inch up to eight-by-ten-inch negative film and did contact printing. I wanted to get the look of black-and-white photography from the late 1800s.”

Ruth continued developing his photography skills throughout his life. He spent thirty-two and a half years working at the Entergy power plant in Greenville, calibrating and maintaining controls for the plant. “Towards the end I got really burned out, and all I wanted to do was photography,” he says. He retired in 2012.

Ruth took a three-day workshop in 2005 with John Coffer in Dundee, New York, where he learned to do the wet-collodion technique, which was the main type of photography used during the Civil War. “When I got home, I realized the humidity here is much different.” The technique was very rare, with only about a hundred photographers in the United States doing wet-plate photography. “Now it’s in vogue, so to speak,” he says. Ruth started following Civil War reenactment forums. From the early 1990s, he shot large format film. “I had always been interested in the process, and I like to be hands-on.”

While most photographers today use digital cameras, Ruth says he doesn’t own one. “The closest I’ve come to that is my iPhone. I’m just an old analog guy.” He uses antique view cameras and vintage lenses, and he appreciates the slow, labor-intensive work that is required by his chosen type of photography. The collodion process involves coating the plate, exposing the image, and developing it, all of which must be completed while the plate is still wet. Because of that, Ruth has created a portable darkroom in the back of his vehicle. 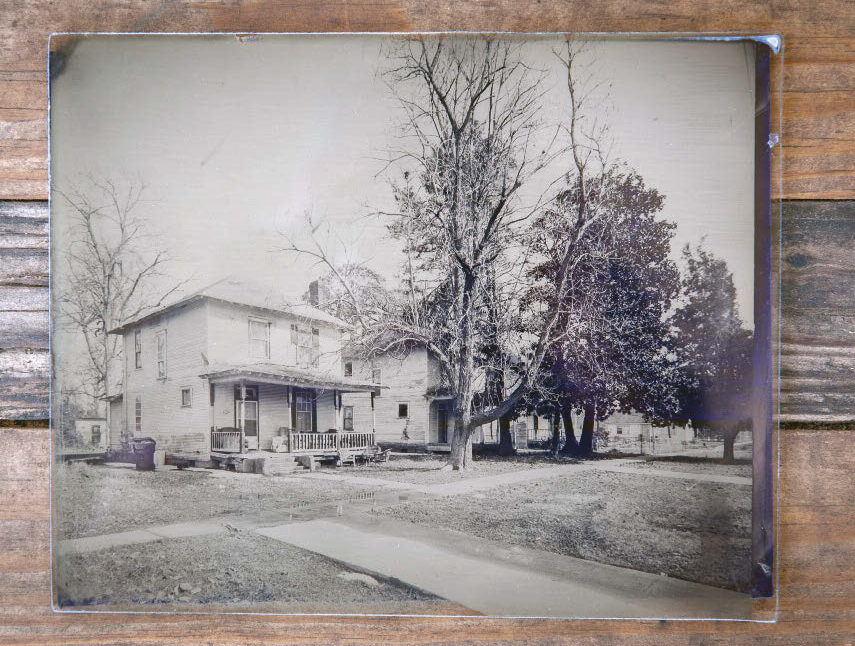 That old soul is revealed in his work, with a focus on rural ruin, urban decay, and earth reclamation, particularly areas with overgrown trees and vines. “I grew up going to cemeteries with my parents. They were from the country and often cleaned headstones. I was a pallbearer at the age of nine, and I shot my first thirty-five-millimeter photographs in a cemetery. I have always been interested in that.”

Ruth is fascinated with cemeteries, landscapes, and old architecture. “I rarely photograph people unless it’s family or people I’m close to. I’ve done a few portrait commissions, but that’s not what I’m drawn to shoot.” His work is along the Southern Gothic vein. “I’m more attracted to old, obscure stuff, the things and places that are forgotten, or half-remembered.” 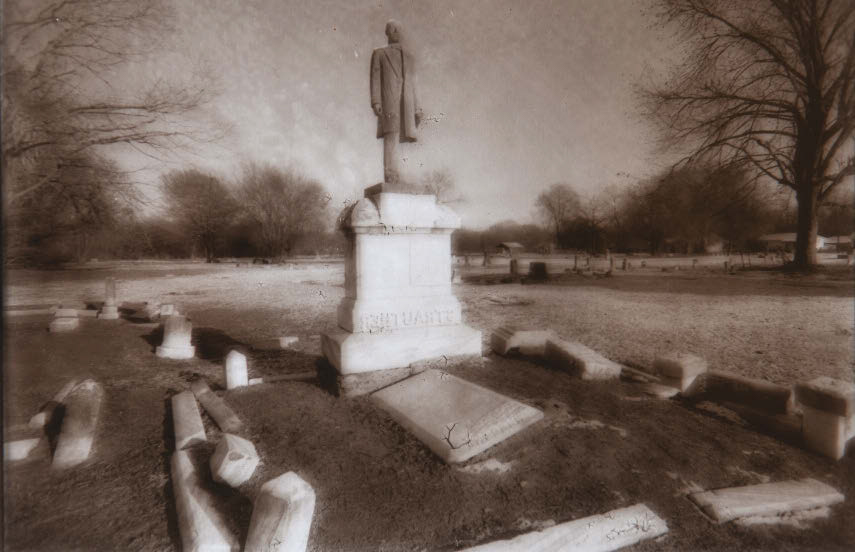 New Orleans is a favorite place for Ruth to photograph. The historical buildings and cemeteries of the city provide the perfect subject matter for him. “I love the unique cemeteries in New Orleans, with their crowded, mostly aboveground tombstones and mausoleums.” His work can be found in A Gallery for Fine Photography on Chartres in New Orleans, and he often does pop-up shows on Piety Street in the Bywater. “I show a little around Mississippi. I used to do juried shows but don’t really do that anymore.” Ruth is a member of Photo NOLA and the New Orleans Photo Alliance. His work is part of a traveling show called Southbound: Photographs of and about the New South, which Ruth says is now in its second or third year. “We just opened in North Carolina,” he says. “Before that, the exhibition was in Baton Rouge, on the campus of LSU, and last fall it was at Hendricks College in Conway, Arkansas.” Ruth’s work in the exhibition features scenes that are familiar to Southerners, yet they are portrayed in an eerie way: foggy cypress swamps, the remains of a bridge that no longer connects two bodies of land, winter scenes of trees with no leaves, and time-worn mausoleums. It’s as if Ruth is straining to find the beauty in the most desolate of places, and his haunting images have a surprisingly soothing effect.

Through the years, Ruth has studied the work of many photographers. “I have been greatly influenced by the work of Clarence John Laughlin of New Orleans,” he says. Laughlin was dubbed the “Father of American Surrealism.” Ruth was mesmerized by Laughlin’s book, Ghosts Along the Mississippi (published in 1948). “The photographs in that book, to me, were like Edgar Allen Poe with a camera.” 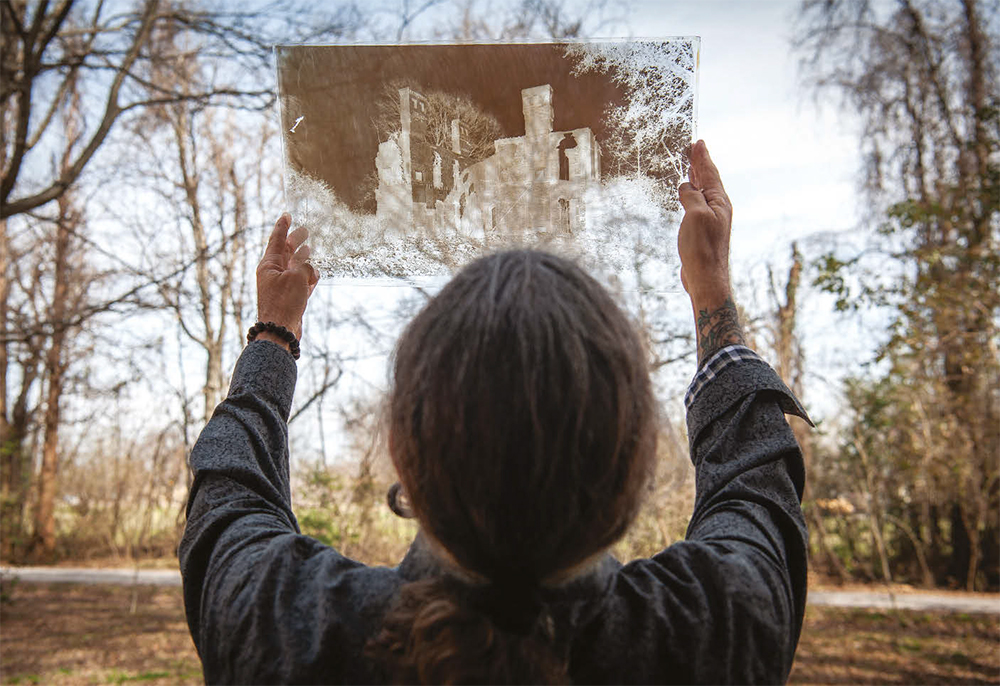 Baptism is also a subject Ruth finds powerful, especially full immersion in a lake. The sacred experience is filled with the intangible and spiritual powers of conversion and transformation. He has also studied with Quinn Jacobson, and two years ago he went to a workshop at the George Eastman Museum in Rochester, New York, to study with Mark Osterman.

Unlike the crisp, clear photography many are used to seeing, Ruth’s work is more alternative—his handmade images produce unusual visual effects. Blurring patterns often trick the eye into seeing something that may—or may not—have been in the image he captured. The long exposures required to create his images often result in surprises.

Outside photography, another creative outlet Ruth enjoys is music, a passion he shares with his son Cody. “He has two houses here in Greenville, and uses one of them for house concerts. It’s fun to hear music in such an intimate setting—and I don’t have to go far to do it.” 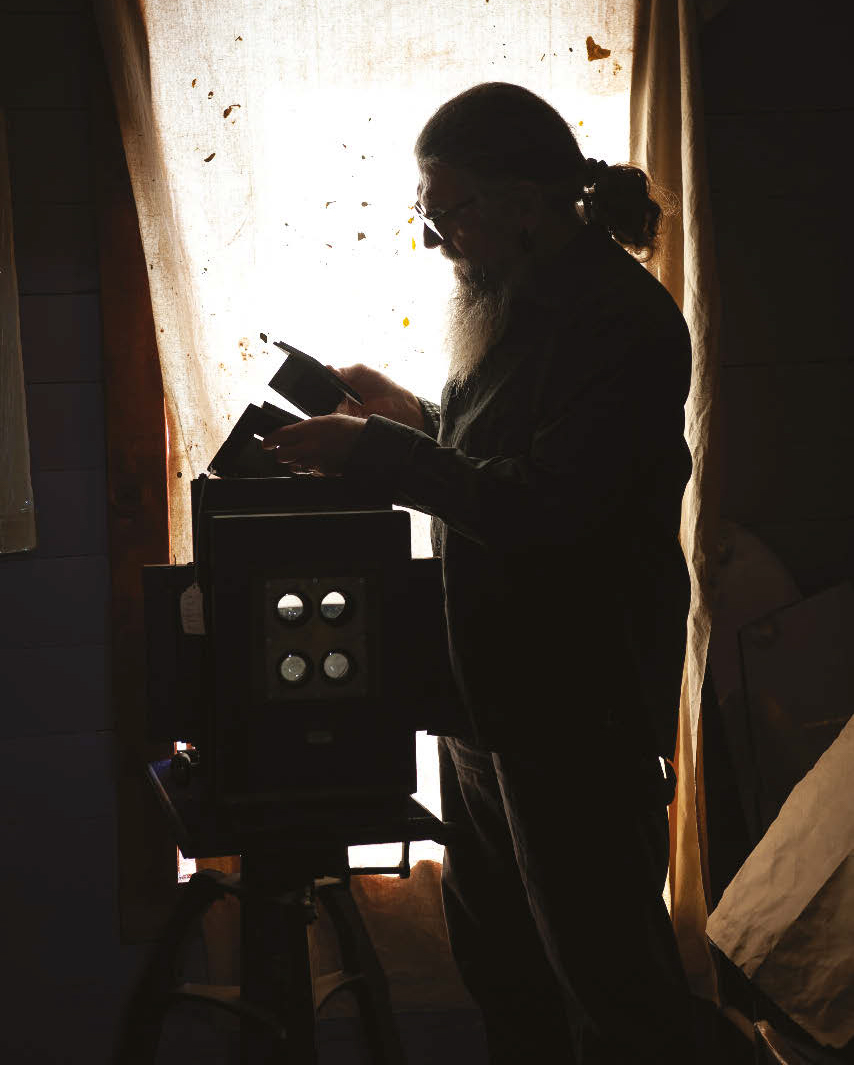