Everything Old is New Again

Paying homage to its late-Victorian origins, this exquisitely reimagined family-friendly home blends effortlessly into one of Oxford’s finest old neighborhoods. 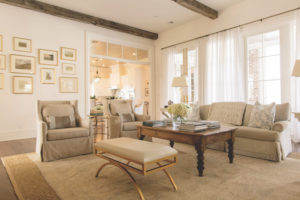 Stephanie and Tom Tann were immediately attracted to 1405 Madison Avenue in 2012 when the house on the elevated corner lot came up for sale. Just two blocks from Oxford’s famed courthouse square, situated in a neighborhood much coveted by young families, the 1898 dwelling had just the old-fashioned charm the Tanns sought. Its long wrap-around front porch with delicate gingerbread trim harkened back to the days of “old Oxford,” when the current teeming and ever-expanding city was just a small, quiet college town, and William Faulkner was barely one year old.

“Our original intention was to renovate the existing house,” says Stephanie, “and we knew we wanted Frank Tindall, whose work we loved, to design the project for us.” Tindall is an Indianola native, now based in Oxford, and probably the Delta’s busiest residential designer these days. He had worked with the couple before on an addition to their previous home. 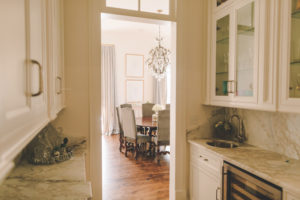 “The house on Madison had so much character,” Tindall recalls, when asked about his initial impressions of the one-story clapboard cottage, “But after careful examination, we decided that, structurally, it was simply too far gone, after so many years, to be salvageable. And so the decision was reached to rebuild.”

There was never any question about the style; the new construction would be firmly rooted in the late-nineteenth- century vernacular of the original. Its most distinguishing feature, that curved porch, would remain the focal point of the reimagined residence. Adding square footage to accommodate the Tann’s two young children, now teenagers, was a priority. The decision was made to go vertical and add a second story with suites for each child and generous guest quarters. Tindall drew a quintessentially Victorian-style façade, complete with nine-over-nine mullioned windows on the lower story and smaller six- pane fenestration up on the second. The footpath of the cherished porch remained the same, although the narrow decorative apron of spindles and brackets along the roofline was omitted, and a railing with balusters was added.

Entering the house through that porch, the first-time visitor could easily believe that this was indeed an old house, carefully and lovingly restored. The formal entry is flanked by a sitting room with fireplace on the right side and a large family dining room to the left. The tall cased openings to each room, as everywhere else on the main floor, are topped by sparkling glass transoms, fashioned of recycled glass from the 1800s, a reference to those present in the original structure. A staircase leading to the children’s and guest rooms rises just past the wide living room doorway. 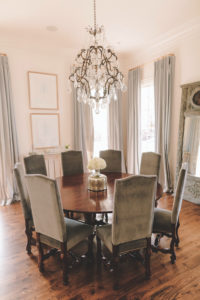 Bathed in abundant natural light from the long windows, the interiors are luminous with a palette of pale neutrals and interesting textures. To bring the rooms to life, Stephanie chose Jackson interior designer Betsey Mosby. “I had not worked with Betsey before,” notes Stephanie, “but I really admired the work I had seen her do for others.” Mosby shares Stephanie’s preference for pale, monochromatic schemes that bring into focus treasured collections, artwork, and a mix of antique and contemporary furnishings. Photos and memorabilia from the family’s many travels adorn the house as well.

Mosby, who also maintains an Oxford studio and works there for part of the week, is quick to give credit to her client’s good taste. “Stephanie has a really excellent eye and has chosen some of the appointments herself,” she says, “and has been open- minded about some of the more unexpected things I’ve suggested! We worked really well together as a team on their house.” Fabrics, in particular, were meticulously specified to bring texture and depth to the rooms. 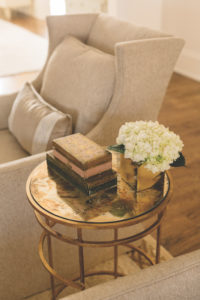 The couple, and Tindall, were determined to use old, reclaimed materials wherever possible to provide the vintage feel of the backdrop to the interior schemes. The floors are white oak, taken from the floor joists of a demolished house in Athens, Alabama, circa 1890. These were milled into tongue-and-groove flooring by a Tennessee mill. In addition to doors from the original house, others were crafted from old cypress rafters from an old textile mill in Virginia. The beams in the large central family sitting room, opening off the rear of the entry hall, were also reclaimed. Most of these repurposed treasures were found at Southern Accents, Garland Gudger’s vast collection of architectural antiques in Cullman, Alabama, a source well-known by designers and renovators for the past half-century.

As is the case in most family homes, the kitchen is the hub of daily life at the Tann’s. Soaring white cabinets and pale Calacatta gold marble countertops with a warm wood-plank ceiling that echoes the flooring, all contribute to the look of an old-fashioned country kitchen. There is ample space for creative culinary activity, although Stephanie confesses to doing less cooking these days with son Harrison off at Clemson University and daughter Julia busy with high school. Because of its expansive proportions and generous work surfaces, the Tann kitchen is often used by good friend and cookbook author Elizabeth Heiskell for classes and demonstrations.

Behind the kitchen, a second staircase leads to a suite above the garage, comprised of a bedroom suite and sitting area that 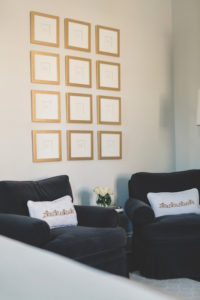 Tom, an ophthalmologist, uses as an office, exercise, and music room, where he enjoys retreating to play his guitars. The railing of this stairway is made from posts reclaimed from old churches, banks, and houses. In the space under the steps, Tindall added a particularly clever grace note: a tiny cage doorway leading to a cozy nook for the family’s much-loved (and admittedly spoiled) “other children,” Cavalier King Charles spaniels, Beezus and George.

Tucked away on the opposite side of the first floor, beyond the family room, is a beautifully appointed corner master suite. Here the same cool, calming neutrals predominate, and the custom upholstered king headboard is symmetrically flanked by painted French commodes topped by contemporary white sculptural lamps. The master bath is a spa-like retreat with marble surfaces, plenty of vanity space, and a private soaking tub for quiet moments.

As livable and appealing as the rooms of the main floor are, the Tanns claim that what they enjoy most are times when weather permits them to take their meals and leisure outdoors. Beyond the family room, accessible from the kitchen wing, is a deep, sweeping covered rear porch, complete with dining table, large swing bed, and wood-burning fireplace on the far end. All this overlooks a grand and gracious swimming pool, also designed by Tindall, that is a popular spot for summer gatherings. 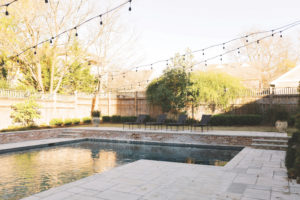 The landscaping has been kept simple, especially out front, where the undisputed star of the show is a huge, one-hundred- year-old ginkgo tree, taller than the house and known for generations as “The Oxford Tree,” according to Stephanie. “We absolutely had to preserve it!” she explains, noting that during construction a fence was built around it in order to keep its roots and lower branches from harm. Every autumn, without fail, its leaves glow a resplendent, bright lemon yellow, reminding locals that some things never change.