Exploring the Ghost Signs of Greenwood 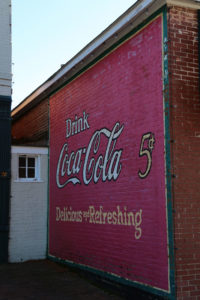 Before the construction of the Highway 82 bypass, downtown Greenwood was an important route into and out of the Delta. The businesses there were in a prime position to make the best of it, so it was a bustling, thriving hub of marketing, commerce, entertainment, hospitality, and transportation.

Today, if you look closely enough while walking along its charming, brick-laid streets, you might be able to see pieces of this antiquated version of downtown Greenwood. But you have to know where to look. Old Greenwood lives on in the form of its antique buildings and ghost signs, which are advertisements painted, carved, cemented, or tiled directly onto buildings, floors, or sidewalks. These advertisements are considered ghosts because the businesses are long gone, but the signage remains.

Just a glance at some of this old marketing might transport you back to the early twentieth century. Suddenly, you may hear the clip-clop of horses, the rolling wheels of wagons along the brick roads, and the incessant commotion of honking old-timey cars and buses. It wouldn’t take too much imagination, as downtown Greenwood still thrives with wonderful shops, businesses, banks, government buildings, and tourism, and at the same time, it preserves—frozen in time, almost. And always, friendly chatter, church bells, and train whistles remain. 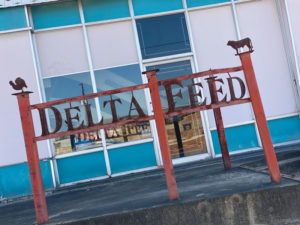 The train tracks of the Illinois Central Railroad and the C&G Railroad along Carrollton Avenue and Johnson Street brought prosperity to the merchants of downtown Greenwood. One such of those merchants was Mr. Dahmer, a German immigrant who owned the whole block from George Street to Lamar Street on Carrollton, and the lovely tile that claims his block in green and gold still remains. According to Mary Carol Miller—an author, historian, and Greenwood native—the Dahmer Block was occupied by a series of hotels and the Bon Ton Café, where the Crystal Grill now stands. On the George Street end of this block was Dahmer’s general merchandise store, the words still visible over a century later.

Across Lamar Street from the Crystal Grill is some true ghost sign excitement: the Juchheim Wagon Works. Not only were wagons built there, it also served as a livery stable for horses, conveniently situated next to the train tracks. Doors made for the wagons to enter and exit still stand. When cars began to replace horses and wagons, Miller says it turned into a business for automobile upkeep. This transition is evident by the ghost sign on the side of the building, advertising “Windshield Glass, Seat Covers, and Curtains.” But the best remnant of the Juchheim Wagon Works would have to be the horseshoes, cemented into the sidewalk in front of the building on Lamar—still as clear as day, stubbornly representing not only a long-ago business but also a long-ago form of transportation.

Across the tracks, on East Johnson, is the sign for Kornfield’s Department Store, and though the business is an old one, their sign is not a ghost because, as Miller points out, “Kornfield’s is still a wonderful store.” On this side of the tracks, you might be able to feel the lively Saturday nights of the early to mid-twentieth century. This is where the Dixie Theatre, which hosted musicians as big-time as Bessie Smith, had lines that snaked all the way back to the tracks. 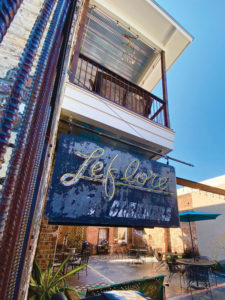 The side of one of these East Johnson buildings reads, “Super Soul Lounge,” next to a large advertisement for RC Cola, the RC huge. Down the block is a sign with an arrow that points to “Malouf Record Shop—One Block.” Not far from here, facing Johnson, is a fading façade on the side of a corner building, the word “Groceries” barely visible. Miller points out that this little store may have been the beginning of what became the world-famous Lusco’s Restaurant.

Opposite from what is now Rail Spike Park, the painted rear of a building advertises Delta Feed Co. and their wares: insecticides, fertilizer, feed, and seed. The front of this edifice on Carrollton has a metal sign with a cow, a chicken, and a pig still standing atop the posts.

On the corner of Main and Church Streets stands a gorgeous blue and white Greyhound Station, as bright as ever, the lettering pristine. Inside, you won’t be able to buy a ticket for a Greyhound ride, but you can order a daiquiri and a snack at Tasty Sipz, the business that has just recently moved into this unique structure.

Whittington Dry Goods, in the three-story building on Fulton Street where Smith & Company now sells its goods, not only advertised the business name but also a product they sold inside the store, barely readable now.

Along Market and Howard Streets, banks clustered together. The banks moved around, merged, were bought, and were closed, but many times, they put their stamp on a building anyway. On the corner of West Market and Howard, Guaranty Bank has just moved into a building with “Wilson Banking Co.” carved above the doors with white Ionic columns on either side. After applauding Guaranty Bank’s restoration of the building, Miller talks about the day that Mr. Wilson died.

“Anytime the principal officer of a bank died, the state bank examiners had to close the bank to look over the books. In 1931, distrust of banks during the Depression was common,” Miller says. “When people saw the bank examiners closing the bank, they panicked and pulled their money out of banks all over town. Most of the banks closed and were never reopened, including Wilson Banking Company.”

A few steps down West Market, another bank remnant is carved above the doors of what is now Staplcotn. Above one door is carved “Offices,” and over the next door, “Bank.” This building was home to Henderson & Baird, in addition to the Bank of Commerce, which was the only bank to survive the Depression. Henderson & Baird was the largest retail store in the state, Miller says, and it even featured a skating rink on the top floor. While standing there, Miller detects more ghost lettering. Barely readable, it looks to be the beginning of the word “Henderson,” and the sign is so faded that it’s impressive she even notices it.

On the corner of Howard and West Washington, above what is now Fincher’s, a faded sign advertises the “Security Bank & Trust Co., A State Bank, 4% Paid on Savings Accounts.” Due to the fact that rates fluctuate, it seems bizarre to paint a rate or a product, as with Whittington Dry Goods, on a building in such permanence. Miller explains that painting buildings was like putting up billboards back then.

Along the Yazoo River on West Front Street, a large Coca-Cola advertisement reads, “Drink Coca-Cola 5¢ Delicious and Refreshing,” which Viking Range restored. Its brightness and contrast of red and white are so suddenly striking in comparison to the many fading, and sometimes overlapping, ghost signs found elsewhere.

“Back then and even now, everything on a Coca-Cola sign has to be just right by their standards. The red has to be a certain red. It has to be that particular, iconic script. It cannot vary, and the proportions have to be just right,” Miller says. A few steps down the street is another faded Coca-Cola ghost sign. “There were Coca-Cola signs everywhere. It was saturation advertisement. They would paint on anyone’s building who would let them do it.”

Around the corner on Main Street, the old Ford dealership is designated by beautiful blue and white ceramic tiles, again in the iconic Ford script. Across the street, the Swayze Cotton Company’s lettering has faded in the last few years, Miller says.

After a few strides down Main, white and black tiles on the sidewalk spell out, “Smith. Gro. Co.,” a remnant of a grocery store that had once done business in a structure on this site, which was demolished last year due to lack of preservation.

Turn around and on the corner of Market and Main Streets, the “Leflore Dry Cleaners” sign stands strong over the now Howard & Marsh Exchange. This sign is so clear and perfectly aged that it was the chosen background of a scene in The Help. Around the back of the wonderfully restored old city hall, the Leflore Dry Cleaners neon sign hangs in privacy in a peaceful courtyard.

“They were going to knock down the building, ten or so years ago, and so some enterprising person came and took this sign. Then when it was decided that they weren’t going to knock it down, the neon sign magically reappeared,” Miller says.

All along Main and Market Streets, right and left, are ghost signs for clothing, hardware, and automotive stores, remaining due to a loving nod to the past by present business owners. In the building where Beard + Riser Architects and Delta Design Build Workshop reside, “Klein & Blumenthal Department Store” is engraved in script at the top of the building. In the alley behind is a surprising treat: the “New Deal Tobacco & Candy Co.,” which was a wholesale store that used to sell “King Edwards Cigars” and “Tampa Nuggets” to convenience stores, has been vibrantly repainted thanks to Gary Woody who had it restored after the property changed to his hands.

Inside what is now Amelia Grace Bridal, hexagonal tiles spell out “Kantrovitz,” which is the last name of the Russian-Jewish brothers who bought this site for one of their gentlemen’s stores in 1897. They changed their name to Kantor for brevity’s sake in 1915 and consolidated into one building on Howard Street, naming the structure “Adeline,” after one of their daughters.

“Notice the names of the buildings carved or tiled into them,” Miller says. “Naming buildings is a lost art.” And Greenwood has so many named buildings: the Fountain, the Bright Building, the Adeline, the Whittington, and, recently, the Durden and the Lorraine, which Fred Carl named after his mother.

“The Bright Building was Woolworth’s, which was the Walmart of its day but much better,” Miller says. Looking at the entrance to Russell-Thomas Antiques on Howard Street, Miller points out the trademark blue and white Woolworth’s tile preserved there.

Miller says there is one sign that is truly ghostlike. In the edifice on Howard Street where the new Bank of Commerce operates, she claims that the words “First National Bank” are carved there between the other ornamental carvings at the top of the building. But it’s not clear what she’s talking about, at first, because nothing is there. “You can only see the words for about ten minutes or less,” Miller says, “after the sun comes up behind these buildings and shines directly on the words.”

A few mornings later, grabbing coffee downtown at an early hour, I happen to catch it, and just as soon as I do, the words are gone. Vanished. A chill runs through me, and a train’s whistle echoes through downtown Greenwood. It’s obvious that this downtown is an interactive, live museum of Delta commerce, past and present, and it tells the story of how these businesses relate to each other through the centuries. As of now, it seems up to the present to rescue what remains of the past, while the past lends its charm to the present.

1 thought on “Exploring the Ghost Signs of Greenwood”