“THE NET! THE NET! GET THE NET!” I took my eyes off the mass of silver and red flashing in the current a few feet from me and cut them at my girlfriend, Stacye.

Admittedly, this type of fanaticism doesn’t endear a woman to a man. In fact, it’s often the foundation for a fast parting of ways.

She simply stared at me, still as a stoic, amid the roiling water of Arkansas’s Norfork River. I looked at the fish, then back at her with a desperation only an angler will understand. Our eyes met, and I knew it was hopeless. She hadn’t moved. There was a serious disconnect between my struggle and her level of care for that labor. 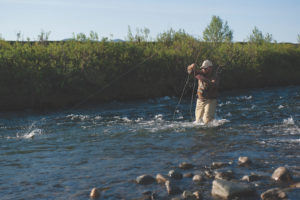 I moved downstream to play the leviathan into some slack water near an outcropping of rocks. The fish ran and sent the reel screaming then took to the air. I bowed the rod to the trout and retrieved the line. It came in close, near the surface, a mere three feet from me, showed its two feet of length, its wide girth. Its hooked lip seemed to snarl, “You better treat her better than that.”

Then it was gone.

The line slackened, the rod straightened, and I hung my head. Looking up I realized I was now standing well downstream of Stacye, who was looking at me as though I was a stranger. She grunted, “Humph!” like she now understood something deep and disturbing about my character as a man.

It was early in our relationship. This was the first time she had been fly fishing with me. She came out of sympathy and morbid curiosity when my regular fly-fishing partner and Glen Allan native, Josh Quong, had to back out at the last minute. It was my birthday, and that would have been the largest rainbow I had caught to date. I took a deep, ragged breath, looked around at all the placidity a blue-ribbon trout stream offers, then doubled down, “WHY DIDN’T YOU GET THE DAMN NET!!!” 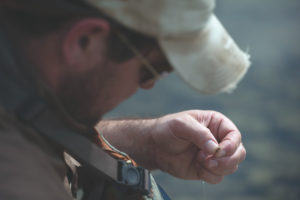 She replied coolly, “You have a net clipped to your back. Why didn’t you get your own?”

There is something about hooking into a big fish that makes a man forget himself; something primal in us that must land the fish. When a lunker is on, we abandon all reason, decency, and sense of propriety. Fly-fishing guides will tell you, “The tug is the drug.” But come on. Who doesn’t want to land a whale and hold it a while? Verily, who doesn’t want to hold, if only for a moment, a thing as beautiful as a trout. It’s not exactly like our quest to find love in this life, but they are certainly kin.

And here I was representing the greatest threat our nascent relationship had faced. As my nerves settled, my senses returned. Although I was the same man standing in the same river, the moment passed, and the angst and anger I’d felt seemed carried away by the current, lost as the fish. As I struggled back upstream, I tried to formulate an apologetic segue into in the rest of the day. It was, after all, not even 8:00 a.m.

“Yep,” she said. “I saw it.” Then she turned and walked towards the bank…

Although northwest Mississippi lacks trout and salmon habitat, Deltans have a long tradition of enjoying the sport. In fact, Tallahatchie Countian T. C. Buford once landed a World Record Atlantic Salmon on light tippet. He hauled the twenty-nine-pound beast out of Canada’s Moisie River in 1982. Mr. Buford, a skilled fly caster who famously gave fly-casting lessons to anyone willing to travel to his home on Buford Plantation, subdued the record fish on a two-handed spey rod with four-pound tippet. 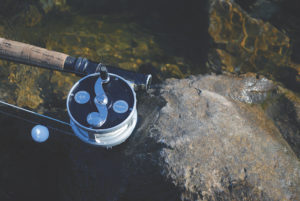 I grew up learning to fly cast from my father. Of course, in this part of the country all we can fly fish for is bream or crappie or bass. While this achieves the coveted diversion from life’s general malaise, we understand that trout fishing is where the artistic and arduous aspect of the endeavor bequeathed to us by our angling forefathers intersect, producing, at times, a near perfect moment. Something akin to a caddis fly emerging from the water’s surface. Or a fattened cutthroat brought to hand and glistening in the late afternoon light. But art dies knee-deep in gumbo wearing knee-high rubber boots, back casting into a pond-side hay bale. No trout lives in such environs. They like cool, clear water. It’s said trout only live in beautiful places. From Vermont to Alaska, I’ve yet to encounter a situation that proved this false. The Ozarks surrounding the hamlet of Norfork, Arkansas, are just such a place.

A man needs a little beauty in his life, especially during times of suffering. And so it was with an invitation from Quong to fish the Norfork with another Deltan, Blake Ward, I began fly-fishing in earnest some twelve years ago. I was going through a divorce. These fine gentlemen thought a fishing trip would help. With Quong always ready to wet a hook, I looked at it as therapeutic: a healthy distraction with family and friends that morphed into an obsession. I’ve made multiple yearly trips to the trout rivers of northern Arkansas ever since. In 2010 my father and I went and booked a day on the water with Delta émigré Ron Yarborough, owner of Ron Yarborough’s White River Fly Guide. 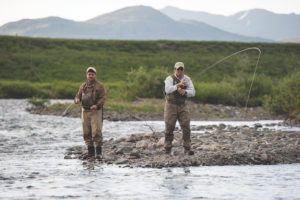 You won’t find a guide more knowledgeable or easy to get along with than Yarborough. After spending his formative years in Cleveland and Arcola, he dreamed of one day running a guide service on the several teeming oxbows that define the geography along the Mississippi. Years later, though, he found himself in Colorado working as a respiratory therapist. But the dry weather that typifies the Rocky Mountains didn’t agree with him.

“My wife is a physical therapist, so I found us both jobs at the hospital up here, and we decided to move,” he explains. “Not long after, I went fishing with a friend on the White River. When I got home, my wife asked if I had fun. I said, ‘Yeah, I’m going to start a guide service.’” Yarborough started out at Mountain Home’s Blue Ribbon Fly Shop and was with them for six years before starting Ron Yarborough’s White River Fly Guide in 2008.

On our trip a phenomenon peculiar to those north Arkansas tail waters, the White and Norfork, occurred called a shad kill. With weather conditions right, the water being pulled from the bottom of the lake sends thousands of tiny shad through the hydroelectric turbines. Giants rise from the depths to gorge themselves on this sudden buffet of bloody fish. At twenty-seven degrees and snowing, apparently these conditions were right for a shad kill. We immediately went from catching fifteen- to nineteen-inch fish to catching twenty- to twenty-five-inch fish. My father landed a twenty-two-inch rainbow, and a few minutes later, I landed a twenty-four-and-a-half-inch brown trout.

We took a couple of pictures, and Yarborough released the fish; “Let’s go make another run and try it again,” he said as he fired the motor and turned the boat back upstream towards one of the best days fishing of my life. Four years later Ron was my first choice when I decided to introduce Stacye to fly-fishing. I was in the front of the boat casting free of instruction and care. She was in the back taking in all of Yarborough’s instructions. Within ten minutes she had a fish on. I’d yet to get a strike. Before she even netted the fish, without looking at me, she said, “That’s one.” Yarborough laughed, and I didn’t tell him what had transpired the previous day. She then out-fished me all morning. At one point while manning the oars, he leaned forward and under his breath said, “You need to put a fish in the boat, brother. She’s already caught eight. This is getting out of hand!”

Five years have passed since then. Whenever we need a guide, Yarborough is always my first call. His business has grown tremendously. He employs six other guides and most days need to be booked well ahead of time. They average about a trip a day per year, with Yarborough taking the lion’s share of his customers himself.

Fortune smiled this year, and we booked him on his one free day in the middle of a two-week run. Our twenty-month old, Ava, however, decided to take a nap just as we were getting ready to launch the boat. Stacye volunteered to stay with her while I fished a while.

After an hour and a half and only catching a few small fish, I hooked into what felt like a log. Finally, it moved, and we knew it was substantial. Once it flashed to the top, we could see it was a legitimate trophy. In fact, it looked like a twin to the fish I lost five years prior. Yarborough began rowing seriously, giving me quiet but firm instruction: “Rod tip up! Let him run! Strip, don’t reel! Watch those logs!!!!”

After nearly ten minutes of fighting the fish in a nearly flood-stage Norfork, it came in close. Yarborough left the oars, grabbed the net, and scooped him up. 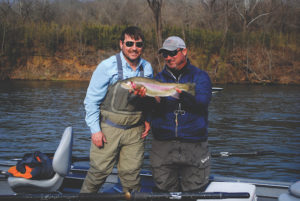 It’s difficult to explain what that feels like. Fly fishing is so technical it can take a long time to become adequate enough to land even a small fish. Landing a trophy is almost surreal. Mostly, I felt a tinge of regret that Stacye wasn’t in the boat as he measured it: twenty-three and a half inches and seven pounds. Yarborough said it was the largest rainbow he’s seen taken off the Norfork in at least two years. We motored back upstream to get Stacye and Ava, but they were both sleeping peacefully in the truck.

Standing on the shore letting my mind drift, it occurred to me that time doesn’t heal a wound on its own, but time well-spent affirms family and confirms friendship. It provides the foundation for love. With every trip to a trout stream I am filled with a hope as old as flowing water.

Suddenly, Ron slapped me on the shoulder stirring me back to reality, “Hey, why don’t we make another run and try it again…”