After several recent renovations, this Winona couple realizes there’s no place like home

In the hunt for updated, cooler living spaces, Eddie and Gay Hammond didn’t need to look any further than their Rolling Greens Estates home in Winona.

Recent renovations rescued their sunroom from its summer blast, added a paradise island and more in a kitchen expansion, refreshed the den, served up a tasteful redo in the dining room, and even tackled the biggest game in the Hammonds’ household—the crowd of trophy mounts, from the Mississippi Delta to points across North America, in Eddie’s hunting room.

“I had been wanting to renovate my kitchen for a long time, and then finally we just decided to go ahead and do it,” says Gay, owner/pharmacist at Hammond’s Pharmacy.

The extensive 2019 work had the couple retreating to “dorm living again” as updates progressed, says Eddie, Bank of Winona president. “We had a bathroom and a bed; that was it.”

“But that was fine,” Gay adds, with a smile that says, “totally worth it.”

Madison-based designer Anna Allen wantedto keep the Hammond home’s traditional style but make it feel fresh and timeless. Gay’s extensive collection of McCarty and Peters Pottery in jade and nutmeg brown provided some color cues, and the blue-green shades, in particular, nudged the new, neutral palette in a breezy direction.

The kitchen’s extra one hundred square feet allowed abundant space for a sweet-spot corner where two big windows come together; a farmhouse sink enjoys the view, and the stone backsplash reaches up to the ceiling. There’s plenty of counter space behind the faucet, where a collection of plants—a mix of birthday present plants from her father and one sent in sympathy after his death from COVID shortly after Christmas—soak up the sun. “I just call this Daddy’s Corner,” Gay says.

The expansive island (eight by six and a half feet), with special baluster columns and a countertop cut, stands out, as do gleaming granite countertops and glass upper cabinets that display Gay’s china and pottery collection. The stone backsplash’s pattern turns herringbone behind the slide-in range—another subtle spotlight that frames the shiny pot filler.

“We did work really hard to make sure it looked original to the house and not like an add-on,” designer Allen says of the expansion. The relocated powder room is a small space with big impact, thanks to pretty powder-blue wallpaper and a custom vanity.

“I am pleased with everything just because it flows now,” says Gay, who revels in newly open entryways, the extra space, and special touches that increase functionality. Patterns, hues, and details make seamless and subtle connecting threads from room to room. She’s most pleased with her kitchen. “I love my big island, and that’s where I can sit and do my work. And then I love sitting in the sunroom because it’s just peaceful.”

Before, it was just hot—too hot to enjoy most of the time—with a series of sliding glass doors that let the room roast. “The back was all glass, so you had all the west sun hitting it, and even with a three-ton unit in that one room, you couldn’t get the temperature below eighty degrees in the summer,” Eddie says. They gutted it and then reinsulated everything, including dropping the ceiling about a foot to add more insulation.

Now, even on a sunny and muggy summer afternoon, the room reads and feels crisp, cool, and inviting. An impressive elk mount is the sunroom’s sole remaining nod to Eddie’s hunting prowess, and along with the windmill fan and V-groove pine ceiling, it adds a pleasingly rustic element. Furnishings are comfortable, attractive, and practical—a sofa in the palest sage, a pair of dove-gray chairs, and a big, soft, and round faux leather ottoman (perfect for young grandkids’ comfort and wipe-down ease). “I wanted something neutral and just soothing,” Gay says. “I just love this room. This is my favorite.”

The den’s fireplace brick now stretches all the way up to the vaulted ceiling, and the muted hues of an atmospheric painting by Harris Fyfe over the mantel feel right at home.

Eddie’s hunting room, originally added in 2003 just off the master bedroom, was first just a place to park the antler overload his passion produced. “To say I’m obsessed is probably a little bit mild a term,” he says. “It became a man cave” and a catch-all for trophies and hunting paraphernalia—guns, hunting clothes—so they weren’t scattered all over the house. He and his son, West, have eighty-eight mounts between them (six now at the taxidermist) that include elk, pronghorn antelope, whitetail, mule deer, turkeys, black buck antelope (killed in Texas), a bass, and some ducks.

“We like hunting in the Delta,” he says, and they’re now finishing their second cabin there. This one (“her project,” he credits Gay) is at Burkes Hunting Club of Coahoma County, and it’s a drive-to upgrade from his first “man-built” cabin at Montgomery Island, accessed by boat.

This past year Eddie was lucky enough to win a hunting lottery, drawing five premium tags out west—odds that worked out between sixteen million and one hundred million to one, according to research, he says. He was even able to transfer the Utah tag to his son and went with him on the trip. Hunts took him to Arizona twice, Nevada twice, and Utah with West once. “I went five for five,” harvesting three elk and two mule deer (one by West). The Texas gun company Horizon Firearms built a special prototype that he and West used in the pursuits.

The challenge of the hunt is what pulls Eddie in, “and everything that goes with it,” he says, from the mountains climbed to the deserts endured. “Mostly, it’s the people you meet, the places you go, and the experiences.

“And it gets you spiritual, too,” Gay says.

Hunts have taken him to Mexico three times and Canada twice. But it’s here at home in Winona, surrounded by the trophies of a sportsman’s life, that he can relax and recount the stories behind each mount in his hunting room. Still, the couple had never really had time to give that space much attention. That became Allen’s task. 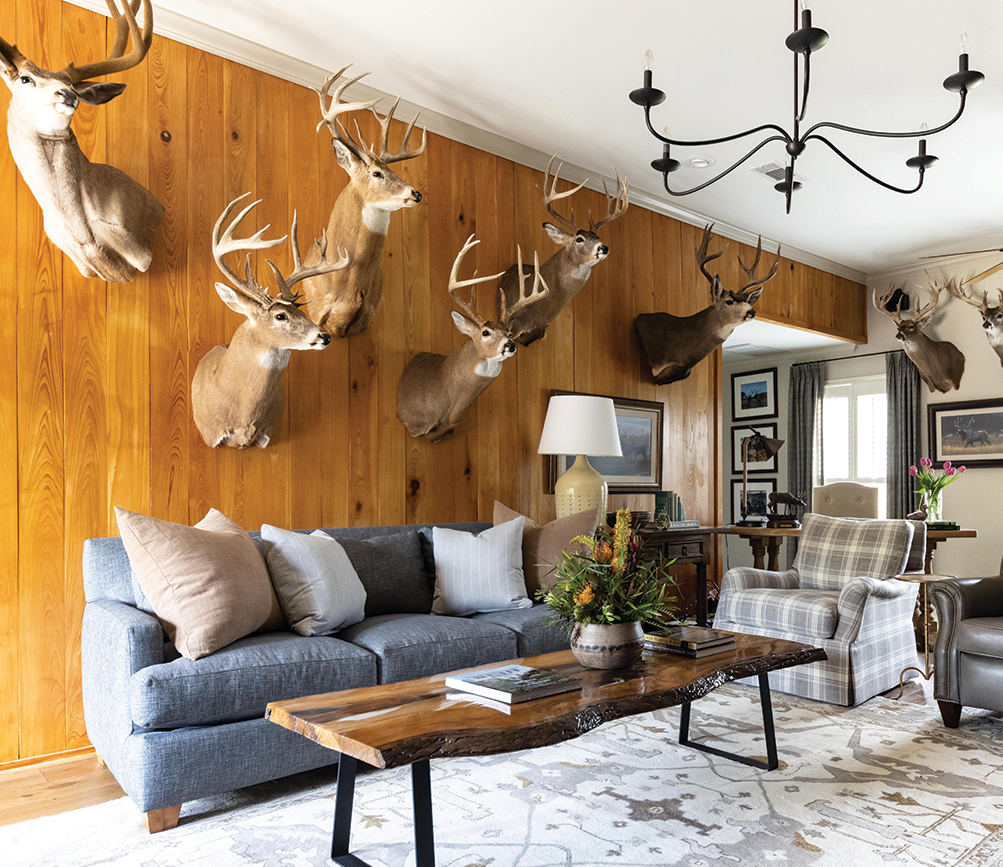 “I’d never seen so many animals in my life,” Allen says of her first look at what would become her first hunting room redesign. Stained concrete gave way to wood floors to soften the look, and an antler chandelier was banished in favor of a much simpler one in iron. A long cabinet highlights Eddie’s collection of animals in bronze too—most of them Bradford Williams sculptures.

A pedestal mount features the two mule deer he and West shot together in Mexico, displaying them together with rocks and scenery suggesting the Sonoran Desert. Allen and Eddie spent a lot of time sorting which trophies would stay in the house and which would go to decorate the new hunting cabin in the Delta. About twenty-two (down from the previous thirty) made the cut.

“That was nice, to scale back and have a design,” says Allen, who also added all-new furniture—a denim blue sofa with a ceramic milk-jug lamp beside it, a new leather recliner for Eddie, and a comfortable chair in custom plaid for Gay. “I wanted them to have a seating area, and I wanted him to have a desk area,” she says, and the curved writing desk, angled for a good fit and view of the room, is manly without being overly ornate. 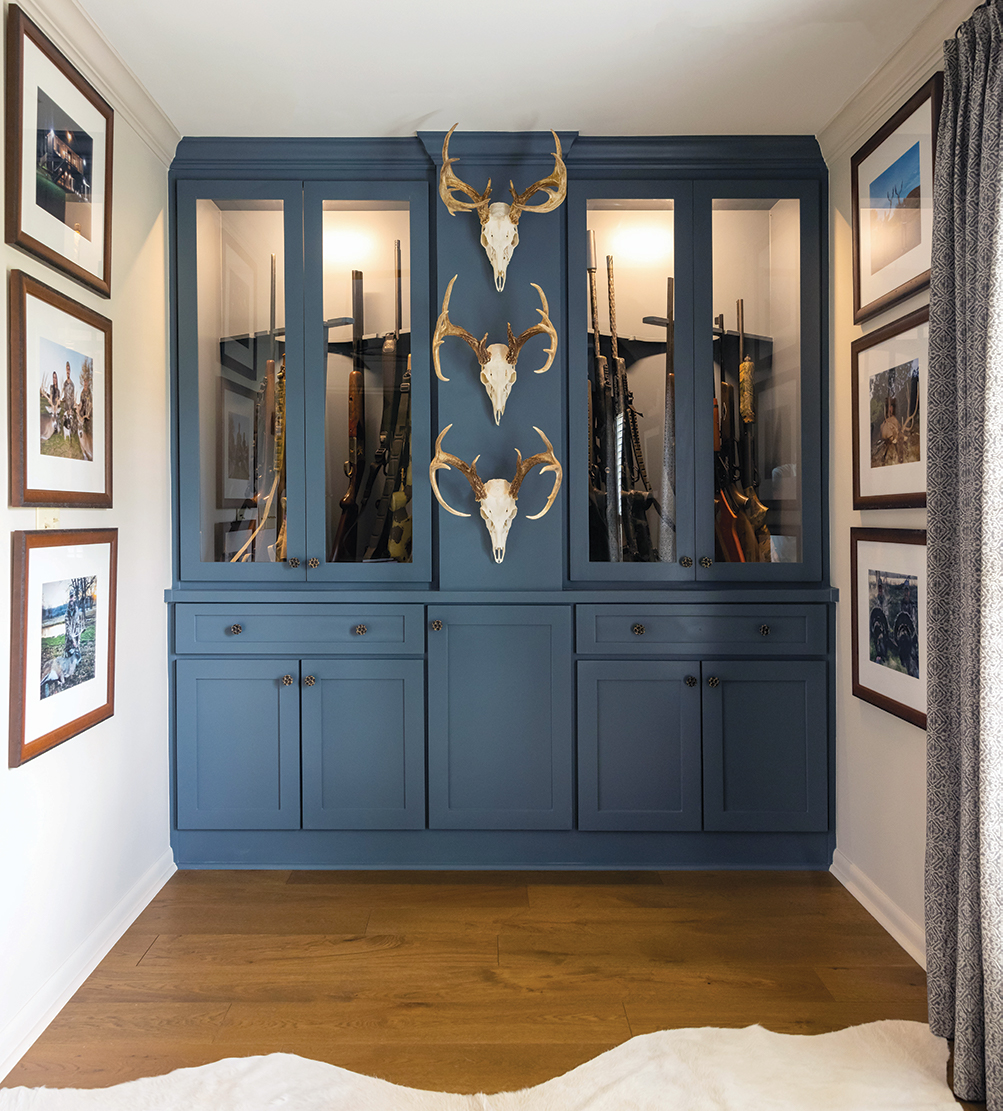 A favorite part is the nook with its new custom-designed gun cabinet in steely blue with a vertical line of deer skulls. Hammered black and gold chunky pulls are an attractive, tactile detail. Enlarged family photos from hunts stack floor to ceiling on the walls flanking the cabinet for a delightfully personal touch.

“Now, I tell people we’ve got throw pillows and curtains in here,” says Eddie, tickled with the transformation. “I never would have had that before.” 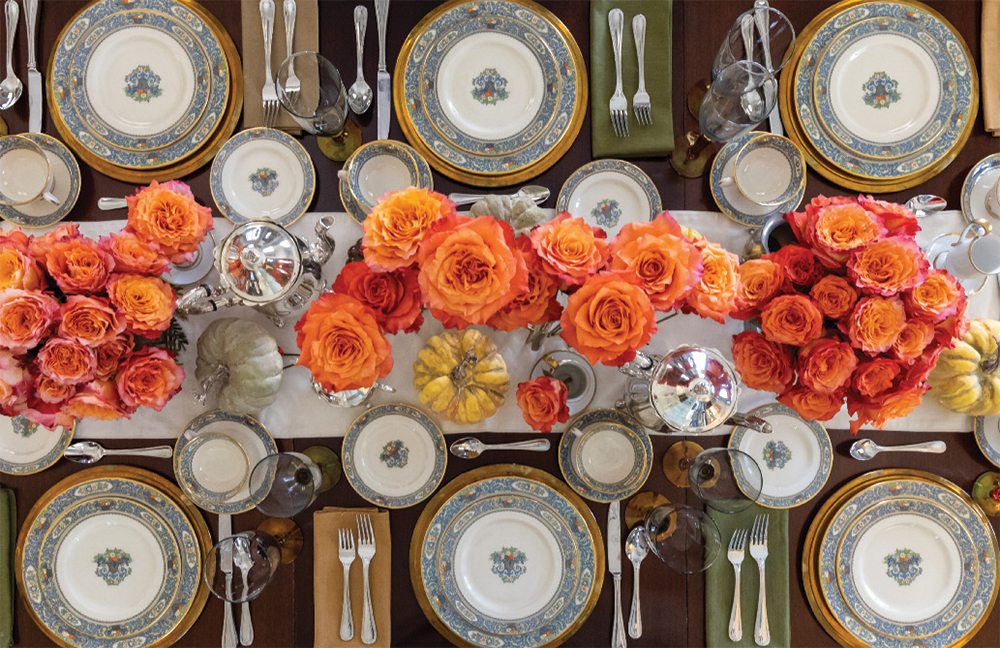 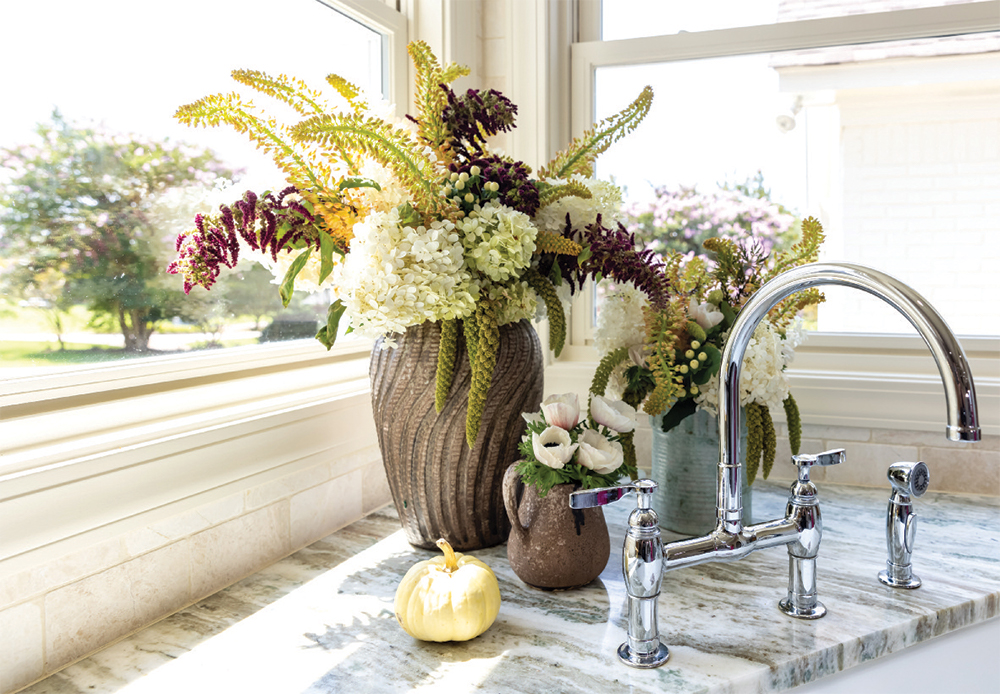