Haute Couture in the Delta — Everhope and White Gold

“Can you host a high fashion dress designer from Albania, a photographer from Russia and a California model one weekend for a photo shoot?” my sister Jane Rule Burdine asked me over the phone one hot July day a couple of summers ago. “Why, you KNOW I can!!” That call was the beginning of an absolutely wonderful adventure into the depths of haute couture for this Delta boy, not to mention the beginning of a deep and blossoming friendship. 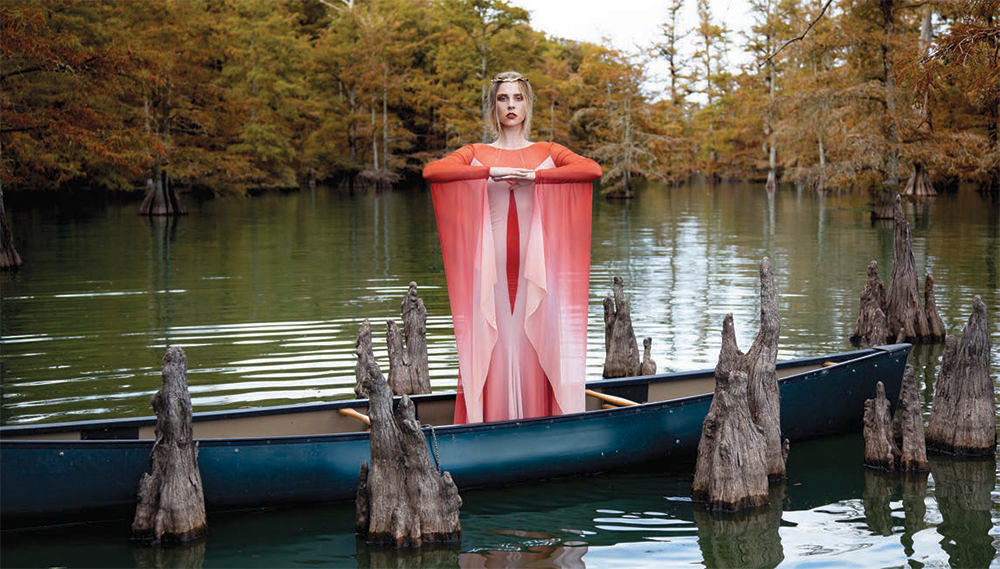 Through a mutual German friend, Jane Rule had been contacted about the possibility of finding locations for a photo spread for two collections by Miami based fashion designer Ema Savahl. One series was a solid white collection based on cotton, while the other featured dresses and gowns of earthy tones, subtle and unsophisticated, yet very elegant. I was to supply housing and scout for locations, while also agreeing on my own to provide night-time entertainment! Excitement raced through my head as I envisioned galavanting from location to location squiring a bevy of beautiful ladies. It was summer and HOT and soon the visions of cool fashion grandeur were melted away by the blasting heat and sweat of the Mississippi Delta. I forgot about my mission.

By the first week or so in October, the corn had been cut and most of the beans were harvested. The cotton around Grace, Mississippi was rapidly being picked and life was good. Jane Rule called again and exclaimed, “Oh, my goodness, the designer and photographer are on the way! It may be best to book them a suite of rooms at Roy’s Store on Lake Washington and y’all can base out of there. I’ve already got plans and can’t be there for a few days. Can you handle it?”

“When is the California model getting in?” I hastily asked.

“She canceled and I don’t know who they have found,” she replied. Oh boy. Thank goodness the weather was good and I hadn’t made any plans for the weekend. They were due into Chatham the next morning!  I have never before been a location scout for a high fashion photo shoot, but I do know every turn road, cypress tree and stretch of the Mississippi River Levee for miles and miles—I would just have to do the best I could. 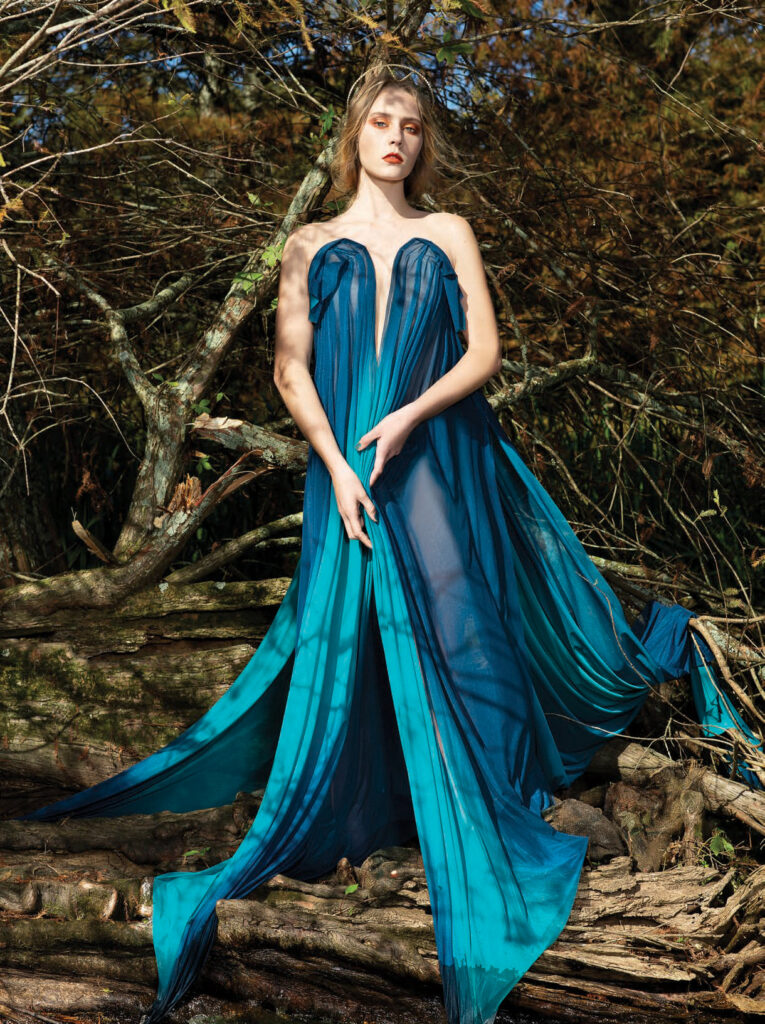 By noon the next day, two of the most vivacious and energetic women I have ever met, Ema Koja and Russian photographer Natasha Kertes arrived. They were busily unloading boxes of cameras and flashlamps, flash umbrellas and stands, trunks full of gowns and sashes of fabric, cases of film and props. I looked around for their support team and the model, but t’was just them and me. Once the boxes and cases were stashed away in their suite, I fixed them both a big Pimm’s Royale and told them to load up—we were fixing to “ride the Delta” and find us a place to take some pictures! (scouting a location in fashion parlance!)

Ema told me about her two collections and what they consisted of. Were there any cotton fields that we could go and see if they would be suitable for what she had envisioned? Ema had created an entire collection of gowns of and about cotton yet, she had never even seen a cotton field nor been in a cotton gin. That was about to change. 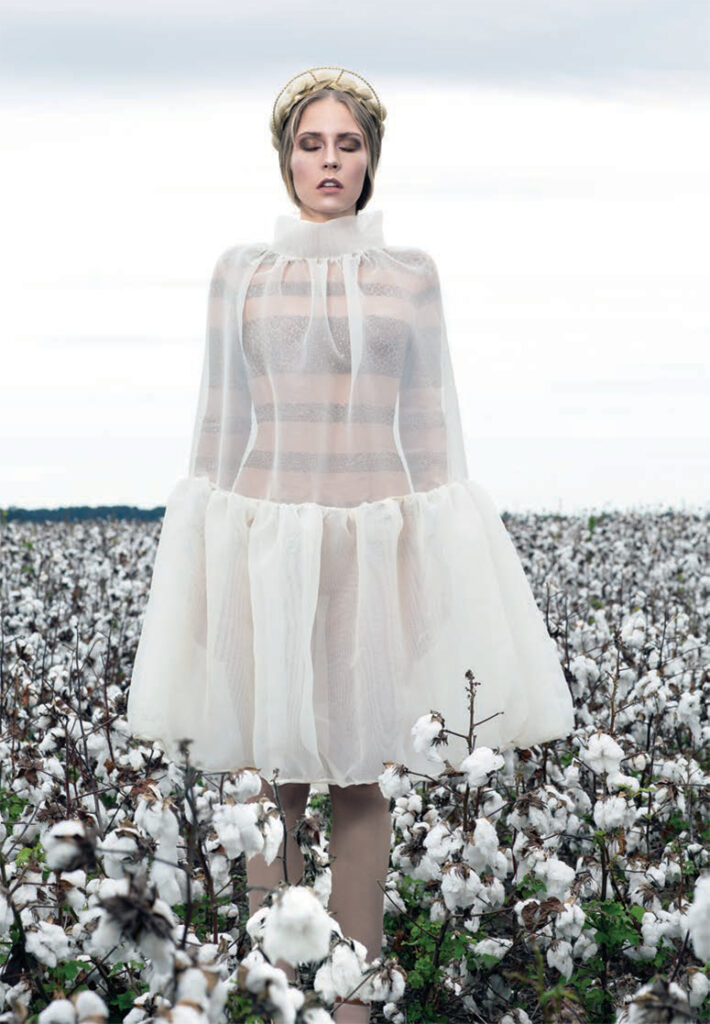 I called on my old standby and friend George Mahalitc and told him I was coming by his Issaquena-South Washington County Gin. George is used to me stopping by during picking time with visitors who have never seen nor even understood what a gin is and what it does. One such guest was actress Jessica Lange on one of her many photographic trips up and down Highway 61.

George said, “Come on, Hank, I can’t wait to see who you have this time!”

George and Russell welcomed us into their gin, taking Ema and Natasha through the entire process and giving them bags of fresh picked cotton still loaded with seed and picker trash as well as bags of seedless cotton, fresh from the gin saws. He even gave each of them a bag of cotton seed. They were delighted! Now, where could we find a nice two and a half bale, solid white cotton field, not yet picked, with a good background for a photo shoot? George pulled on his chin, winked and said, “There’s a nice field right off Highway 1 on the side of the road that leads to our shop. But you better hurry up, those pickers ain’t gone wait on you!”

After looking at the field of white gold, we rushed back to my house for a patch on the Pimm’s Cup, I hooked up my wide beamed flat-bottomed riverboat, Lil’ ITHAKA and into Lake Washington we went. Understanding now what Ema had in mind for locations, we slipped into a long narrow opening on the submerged island of Everhope Plantation, a 500-acre bottom slash of towering bald cypress trees I call the “Cypress Cathedral.” Natasha grabbed her chest and exclaimed breathlessly, “MAGIC!”

And magical it was with the emerald green water, deep blue sky, wispy white puff clouds scurrying past the majestic trees standing sentinel among the fairyland carpet of cypress knees. The breathtaking scene was not only magical, but somewhat reverential, as the beauty and quietness enveloped us.  Ema whispered in my ear, “I can hardly wait!”

I still wasn’t sure as to how I was going to set this whole shoot up and make it happen, but, as I turned into my drive, my son Matt had just pulled in with his deep green Wenonah river canoe atop his Tahoe. Natasha, with her professionally trained eye cried out loud, “There it is! Can we use that boat in the shoot, in the cypresses?” Why of course we can! And fortunately, Matt was there to guide the canoe as I would be captaining my boat full of cameras and lighting equipment. This was getting really exciting, but there was one thing missing. “Uh, I don’t want to sound like a dummy, but do we have a model?” “Yes,” replied Ema, “she will be here in the morning. We have a beautiful girl coming over from Mississippi State.”

That night, gathered around my dinner table with Raymond Longoria and his guitar and Matt with his bongos, we all really got to know one another. 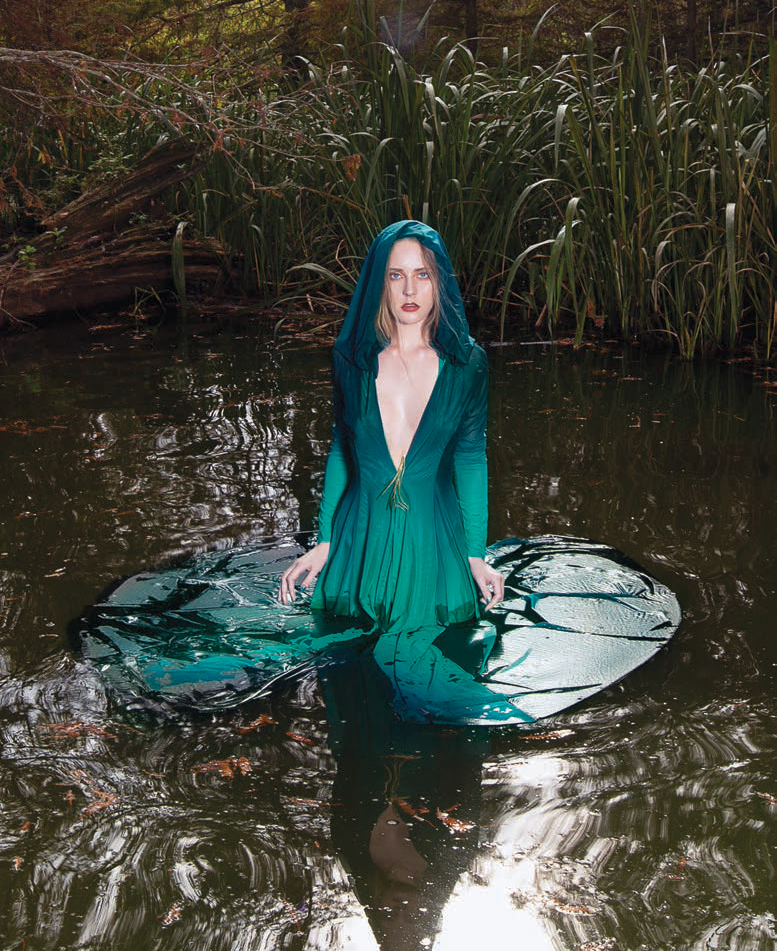 Ema Koja was born and raised in the ancient city of Tirana, Albania under a repressive communist regime. Her two aunts were skilled seamstresses who passed on to her the ability to sew and an inherent sense of style. Her father was a nationally renowned volleyball coach that instilled in her a relentless work ethic and fierce independence. After the collapse of communism, Ema moved to Italy where she became a professional volleyball player. Her athletic frame caught the eye of fashion industry insiders and she became a very svelte model for international brands Blue Marine, PARAH and Off Limit.

A shoulder injury ended her volleyball career and she plunged headlong into fashion, studying pattern making, fabrics, and artistic design. Ema then took a year off to travel, taking in art, culture and beauty all around the world. She landed in the vibrant, multi-cultural melting pot of Miami. The city’s exotic colors, culture and fervent artistry inspired her to stay. It is there that she created the concept and technology for which she is known—strategically hand painting artwork onto garments producing three dimensional textures that manipulate body shapes with optical illusion. Ema had created a unique identity in the fashion world. And as the creator and designer behind Ema Savahl Couture, her goal was and is to make the world more beautiful one dress at a time. Celebrities such as Katy Perry and Jennifer Lopez adore and wear her creations.

Eventually, Ema met the Russian photographer Natasha Kertes. Raised outside of Moscow, Natasha graduated in 2008 from the Fort Lauderdale Art Institute. Known for her work in international fashion magazines and advertising campaigns, Natasha’s work is described as bold, glamorous, alluring and exotic, with nods to high art and mythology. She is intrigued by work that conjures up a sense of mystery and ethereal beauty. Needless to say the cypress swamp at Everhope was perfect. 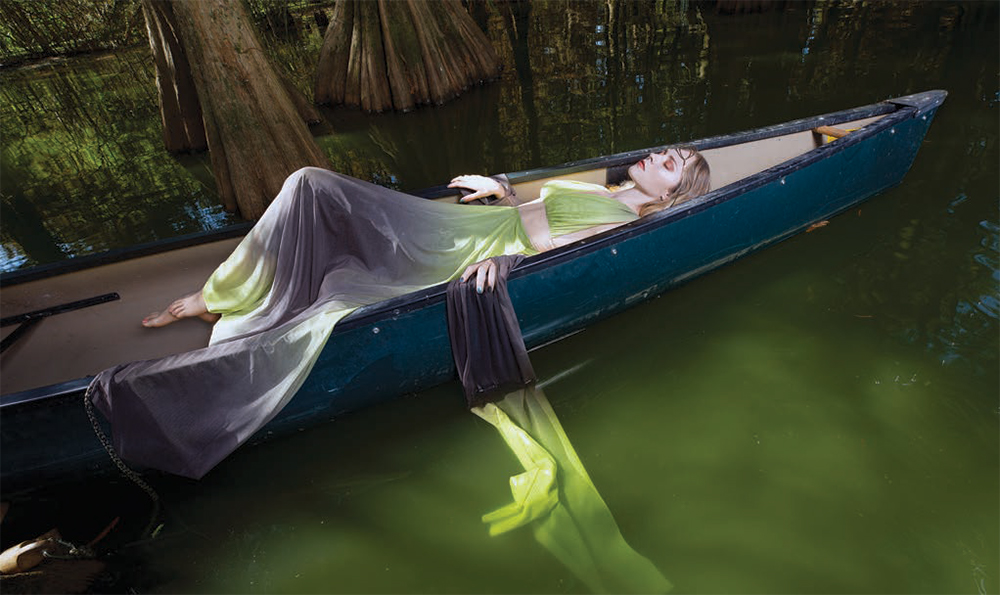 I showed up at Roy’s Store in my boat about 8:30 the next morning. Upon walking into the suite, I was taken aback at all the props, equipment, cases, and clothes lying around. And there, in the middle of the room, being tended to by a make-up artist who was applying make-up and coifing her hair, was one of the most stunning young women you could imagine. I was introduced to her and all she could do was move her head slightly and wink. The model was Zoe Imes, a Mississippi State coed from Florida; it was to be her first modeling job.

I looked at a long rack of beautiful earth-toned gowns and asked Ema if those were the gowns to be worn for the shoot and with another wink and a smile she said, “Yes!”, to which I replied, “Ema, there are no changing rooms out in the swamp!” “Oh, yes there is…your boat.” Uh-oh, I thought, as I turned and went to Roy’s for another cup of coffee.

Once in the middle of the Cypress Cathedral, they started the shoot. It was fascinating to watch Natasha’s trained eye and Ema’s acute instructions mesh perfectly, as Matt, having paddled over, maneuvered and placed his canoe expertly to present the desired shot. The cameras whirred and flashes popped and as each new scene and gown came out, puffy white clouds scurried overhead as Natasha looked at me with an astonished look of disbelief. I said, “The Lord provides.” And as we moved to different locations within the Cypress Cathedral, Natasha would sigh loudly and exclaim, “Thank you, Lord!” It was a truly enchanting experience amongst the majestic cypress. 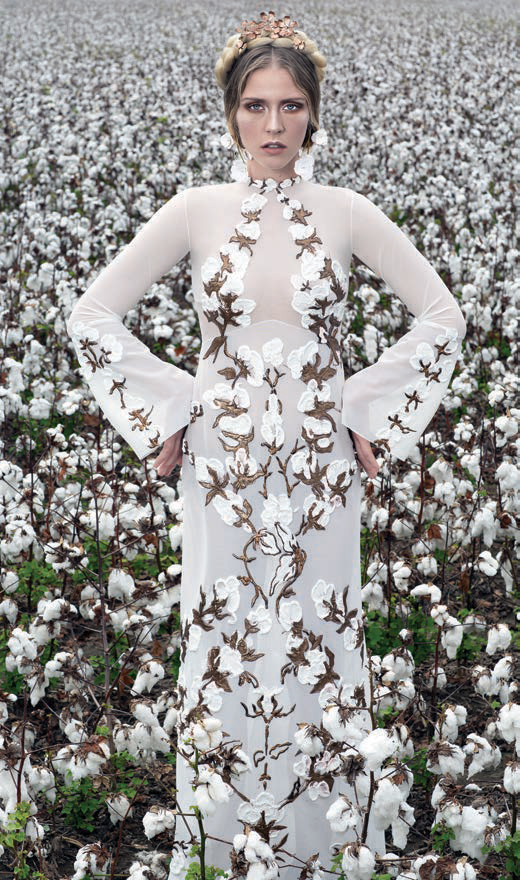 The next morning cotton was everywhere. The huge behemoth looking mechanical pickers, gobbling up six rows of cotton at a time, hadn’t quite made it to the Mahalitc Shop Road right off of busy Highway 1. Remembering Stanley Gaines’ photo of Rogers Varner, dressed in ski clothes and strapped into snow skis, schusshing across a cotton field in the iconic “Ski Mississippi” photo, I grabbed two sawhorses and two long planks for Zoe to stand on in the cotton field. Truckers blew their horns long and loud as they passed by, marveling at the beauty standing atop the rows of cotton. And the clouds skittered about, and the flash cams popped as more surreal images were captured.

At the end of the day, when boxes were packed and cameras put away, Ema Savahl could not stop smiling and Natasha could not quit exclaiming, “Thank you, Lord, it was magical! Thank you, Lord.” 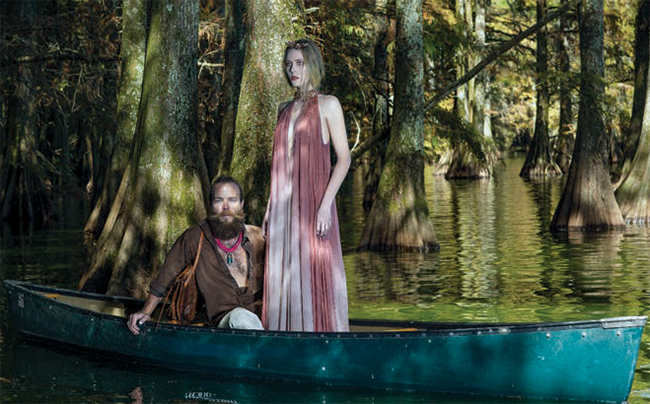