Have Kitsch. Will Travel: Camping in Retro Style

You’ll often find three particular couples rolling out of Rolling Fork in kitschy vintage style. Emily and Clark Carter, Mary and Kevin Corban, and Laura and Paul Hollis, have a rollicking good time in their quirky vintage campers, that are often stocked with food and always full of personality. 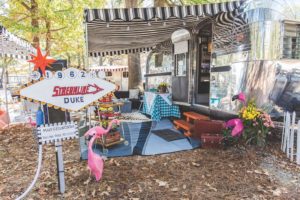 It all started on a drive to Cleveland from Rolling Fork. “First of all, Pinterest is deadly,” laughs Mary, who had found herself browsing photos of refurbished campers. On the way to Cleveland with a friend, Mary turned her car around when a teal and white camper caught her eye in the distance. “I pulled right up into the driveway and no one was home,” she explains. “I did some investigating and found out who lived there. I sent her a message to see if she wanted to sell that cute little camper.” The owner’s husband had rescued what Mary thought to be a Shasta camper from years of sitting out in a pasture. “After some research, we discovered it wasn’t a Shasta, but not a brand at all. It’s what was called a homebuilt camper.”

Mary says she really had no interest in actually camping, but was itching to decorate the inside of that charming camper. “I told my sister Laura that we could decorate it and use it for festivals,” she explains. That’s exactly what they did at The Great Bear Affair in Rolling Fork, where they sold gifts, t-shirts, and art under the awning of the camper. “I said we should’ve been selling tickets for a look inside the camper because everyone wanted to peek.” 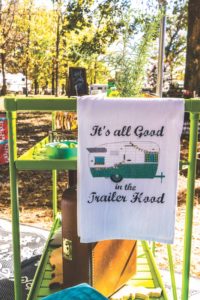 The sisters decided loading up to work a festival was too much work and Mary and Kevin decided to try their hand at actual camping instead. “We took a trip to the KOA in Starkville and just had the best time,” remembers Mary. “It was like a great big tailgate.”

“After hearing how much fun Mary and Kevin had camping, Paul decided he wanted an Airstream,” remembers Laura. The Hollises found an old 1962 Airstream near Eagle Lake. “It had been parked at a fishing camp for years. It was full of rat traps, old mattresses, and gross carpet. My sister went with us to look at it and said it really had potential. I sure couldn’t see it.”

Laura and Paul bit the bullet and Paul set out to get their new Airstream in tip top shape. “Paul rewired and re-plumbed it and stayed underneath that trailer’s underbelly for at least a month,” says Laura. It turns out, Mary was right. The trailer had real potential and a nice set of great bones. 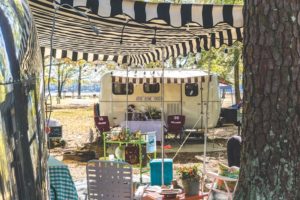 “These old trailers oxidize and turn dull,” explains Laura. “Paul thought it may take him two days to polish and get it back to what it once was. It actually took him two weeks working all day every day. But, it’s as shiny as a mirror. The new ones are made with a different type of finish, so when you see one that shiny, you know it’s old.”

The Hollis Airstream’s original cabinetry is complemented by newly installed vintage Formica countertops. The original sofa was reupholstered, but they kept its vintage charm. A resurfaced bathtub lends another place to take a load off and the original stove was repainted a cheery orange. In their homebuilt camper, Mary and Kevin had been sleeping on a smaller than full-size bed, and seeing Laura and Paul’s double twin beds made them want to upsize. Two weeks before their daughter’s wedding, in the throes of planning, Mary and Kevin set off to Abilene, Texas to take a look at a 1962 Streamline. “Kevin isn’t handy like Paul and wanted one he didn’t have to work on,” laughs Mary. Needless to say, the delightful Streamline made its way back to the Delta with them.

Emily and Clark Carter, long-time friends of the Corbans and the Hollises, had gotten the camper bug as well, seeing how much fun their friends were having. “On one our way back from vacation in Orange Beach, we stopped in Foley and looked at a Scamp travel trailer,” says Mary. “We took a look at it and went on our way. About five miles down the road, Emily calls and asked if we could stop in Foley and take a look at a Scamp trailer that Clark had his eye on. I told her I was pretty sure we just did.” 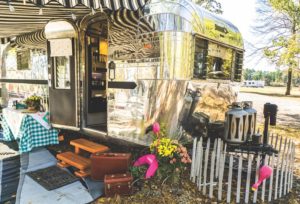 “Clark and I wanted a Scamp for a while,” laughs Emily. The Carters took the Scamp down to not much of anything and Clark painted the exterior, rewired the trailer, and made it their new home away from home.

The Carters, Corbans, and Hollises have made a tradition of tailgating in their trailers, camping out at Oktibbeha County Lake during football season. “We always have a Friday night party,” says Laura, who adorns her Airstream with Mississippi State décor when tailgating. These parties are topped off with food as fun as the atmosphere, including soups, chilis, hot dog bars, s’more bars, Little Dooey’s barbecue, guacamole, and salsa. 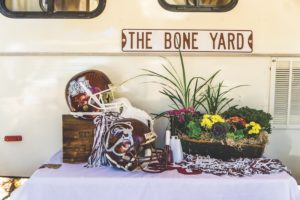 The bulldog and maroon décor is traded out for flamingo embellishments when they travel to vintage camper rallies in Panama City Beach, Florida or Branson, Missouri. “There are so many people there when we go. All of our friends think we’re all crazy, but we know we aren’t the craziest after these rallies!” The crew has also taken their kitschy campers to Grayton Beach, Florida and on a two-week hiatus to Key West.

“I was the last person that I thought would enjoy traveling around in a camper, but it sure has been a whole lot of fun,” says Laura. “And, we get a lot of thumbs ups driving down the highway.” 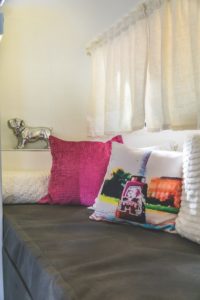 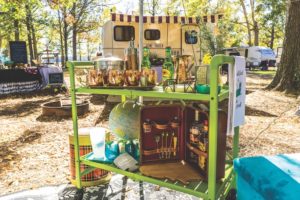