Danger delivers excitement in the Delta’s woods and swamps. 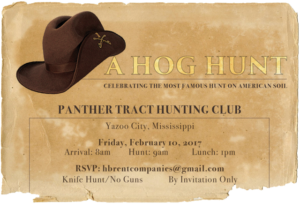 Howard Brent, owner and proprietor of Panther Tract, a 4,600-acre private hunting preserve in Yazoo County that borders Panther Swamp National Wildlife Refuge, is a true Mississippi Deltan with a heart as big as the Mississippi River, from whence he came. Once the Brent family sold their towing operations in 1990, Howard set his sights on his large land holdings in the South Delta. Realizing that his land was more suitable for growing trees than soybeans, he began enrolling his property in Conservation and Wetland Reserve programs administered by the U.S. Farm Services Administration. Oak trees were planted, and water control structures put in place in order to manipulate water and provide habitat for the myriads of ducks and geese that migrate through the area each year. A suitable rambling two story house was found nearby that was moved and put atop a large brick downstairs bunkroom and turned into a glorious hunting lodge. Roads were built and lakes dug while food plots were planted and even an air strip was created. The trees began to grow, and deer began to drift in from the adjoining Panther Swamp while teal, mallards, widgeons, gadwalls and wood ducks began settling into the sloughs, bayous, and impoundments, chockful of corn, soybeans, native grasses and wild millets. A wildlife eutopia had evolved out of marginal farmland and the wild animals of the South Delta were reaping the benefits.

It wasn’t long after the trees took off and were growing good that a problem arose. Howard’s longtime friend and caretaker at Panther Tract, Charlie King, called one day. 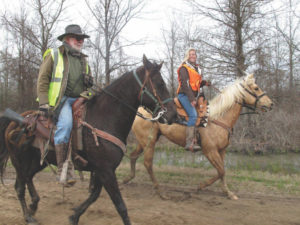 “Podnah, we got a problem down here. I planted thirty acres of corn in the Lake Discovery food plot two days ago and some wild hogs got in there and ate every kernel of corn that I put in the ground. We gotta do something with these hogs.” Feral hogs have taken over certain parts of the state and are very prolific, sometimes having as many as two and a half litters of piglets a year. Left unchecked, wild hogs will decimate wildlife food plots and agricultural fields. They are very detrimental to young trees trying to take off and grow and their incessant rooting of the ground will tear up roads and ditches. At the time, the only way to get rid of wild hogs was to hunt them. Howard had a plan.

“Charlie, you remember ole Bubba Weeks that used to work on propellers for us down at the shipyard. I hear he is a top- notch hog hunter and can probably help us out.” Howard has never let an opportunity to have a good time go by, so after talking to the Weeks brothers, David and Melvin (Bubba), a weekend was set once it got cold, and a hunt was planned. Invitations were sent out, and a world class BBQ operation from Yazoo City was hired to cater the party with barbecued ribs, chicken and trimmings. Big Earl from Pearl was booked to supply the music during the lunch break. Howard Brent knows how to do things up right, Delta style.

The weekend hunt was set for a Saturday, but as Friday approached a big front moved in and the festivities were put off one day. The hogs weren’t going anywhere for sure and the forecast showed clearing and cold through the weekend, just what you want for a good hog hunt. Saturday afternoon arrived with many of the hunting party showing up early and claiming bunks and beds in the spacious hunting lodge. Big horse trailers with sleeping quarters jockeyed for position as horses were let out and corralled around the trailers and fed and bedded down for the night. I brought a sack of Gulf oysters to shuck and twenty pounds of Choctawhatchee Bay shrimp for a big etouffee and the ornate mahogany bar in the den soon bulged with bottles. Guitars were tuned and the festivities began as log after log was thrown on the roaring fire in the big living room of the lodge overlooking the expanses of Panther Tract. Later that evening someone walked out on the porch and exclaimed, “Look there, y’all, it’s SNOWING!!” It was going to be one good hunt!!

I awoke the next morning before daybreak to the smell of good strong coffee percolating in the kitchen and the sound of heavy wool socks shuffling about the hardwood floors. Melody and Steve Golding from Vicksburg were already up and getting ready to go out so Melody could begin to photograph in the newly fallen snow for her upcoming bookPanther Tract; Wild Boar Hunting in the Mississippi Delta. Slowly, revelers from the night before began drifting into the kitchen, nodding their heads in disbelief as they passed the old mahogany bar with the numerous empty and half full remnants of the previous night standing like sentinels of a hard-fought battle. All reached for cups and the gurgling coffee pot. Trays of bacon were sizzling in the double ovens as dozens of eggs were cracked and rows of cathead biscuits prepared to replace the crisping bacon in the ovens.

Seriousness began to take the place of last night’s frivolity as the day’s hunt was planned and the “Boss of the Hunt,” Howard Brent, gave instructions as to how it was to play out. A hog hunt is a very serious affair as the wild hog is as dangerous an animal, once cornered and turned to fight, as you can encounter in the out of doors. Playtime was now over; we were all ready to get down to business.

At 8:00 a.m. sharp, I looked out the upstairs kitchen window to see a land-based armada of vehicles coming up the long winding driveway. 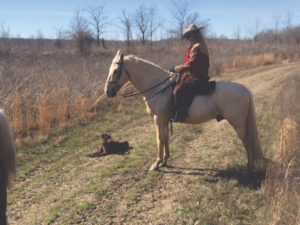 Trailer loads of horses and dogs, four wheelers and Polaris Rangers with dog boxes securely attached, pickups loaded with hunters, men and women, boys and girls, all anxious and excited about the day’s hunt began to pull up.

The snow-covered landscape was stunning in the bright cold sunshine as prancing horses were unloaded and yapping dogs let out to run about sniffing and snorting. Full leather and thick canvas chaps were pulled on over heavy jeans and boots. Bandoliers were draped over dog handlers’ shoulders containing emergency medical supplies for the dogs and horses in case they were needed. Long and lean Catahoula hog dogs, Rhodesian Ridgebacks, crossbred bird dogs, Plott hounds and Black Mouth Curs were all a part of the pack of chase dogs.

Heavy Kevlar vests were securely strapped on some of the chase dogs and onto the heavy bulldogs and bulldog mixes that had been trained to run in as catch dogs to attack and subdue a wild hog once he is bayed and turns around to fight. GPS monitored tracking collars are attached to the dogs to know where the hunt is heading and to be able to retrieve a strayed dog from the pack. Excitement was everywhere, and the air seemed to be filled with adrenaline as hunters mounted horses and the remaining guests jumped onto four wheelers and into Rangers. After conferring with the dog handlers, who would take over as masters of the hunt and lead the day’s affair, Howard loaded up into his big tired Honda four-wheel drive truck, the doors emblazoned with a very official looking sign “Department of Having a Good Time” and the hunt was ON!

On this hunt, because of the size and topography of the place, two groups of hunters and dogs had been invited to participate. No hog man wants his dogs to hunt with another’s pack as the hunting dogs are raised together and trained to hunt together. Chase dogs are keen nosed, long legged tracking dogs trained to sniff out the scent of a hog and take off in hot pursuit without being very vocal because a hog will hear the dogs and head for the thickest most impenetrable cover they can find. 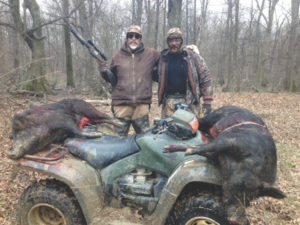 Oftentimes, catch dogs run with chase dogs and when a hog bays, he will turn to fight. The three-to five-inch tusks that grow on wild hogs are very dangerous, having been sharpened by rubbing together as they root around in the ground digging up roots and tubers, grubs and worms. A bayed three-hundred-pound wild hog is a fearless, gnashing, squealing, fighting mini bulldozer that is very dangerous. Only when hogs are caught by three to four dogs does a hunter rush in with a knife to dispatch the hog. And, even though pistols are carried they are very seldom used for fear of hitting a prized dog.

Although a hog hunt looks and seems like a mad, wild race of pandemonium, it is a very articulated and closely attended pursuit. These hog dogs are as much a part of the handler’s family as your lapdog that stays curled up in your house, yet they are trained to hunt and that is what they love to do. Dog handlers stay as close as possible to the chasing and hopefully soon to be baying dogs. A hog will run into the deepest, thickest part of a swamp or forest and he knows every foot of the way. It takes a stout, well trained horse and a very agile and strong hunter to keep up with the dogs. A moment’s delay to a bayed and fighting wild hog could mean trouble to a loved dog. This is hunting sport at its highest degree and the men and women who partake of it are of utmost and rare caliber, quite the nimrods.

On this hunt at Panther Tract, with two separate groups of small hunting parties and dogs, over thirty-seven hogs were taken. A wild hog hunt in the Mississippi Delta is an action packed, adrenaline filled, dangerous and exciting endeavor. It is one of the best ways to try to keep the overpopulation of hogs in check, and no meat goes to waste. As quoted in Melody Golding’s book, Panther Tract, “it is…a place of extraordinary hunting, Southern hospitality, camaraderie and the love of dogs, horses and hair-raising excitement.” Tally HO!