Jake and the Pearl Street Jumpers

From the BB King Museum to Dockery to the Delta Supper Club, these Cleveland originals have brought their joyous sounds to iconic venues and events across the Delta for forty-five years and counting. 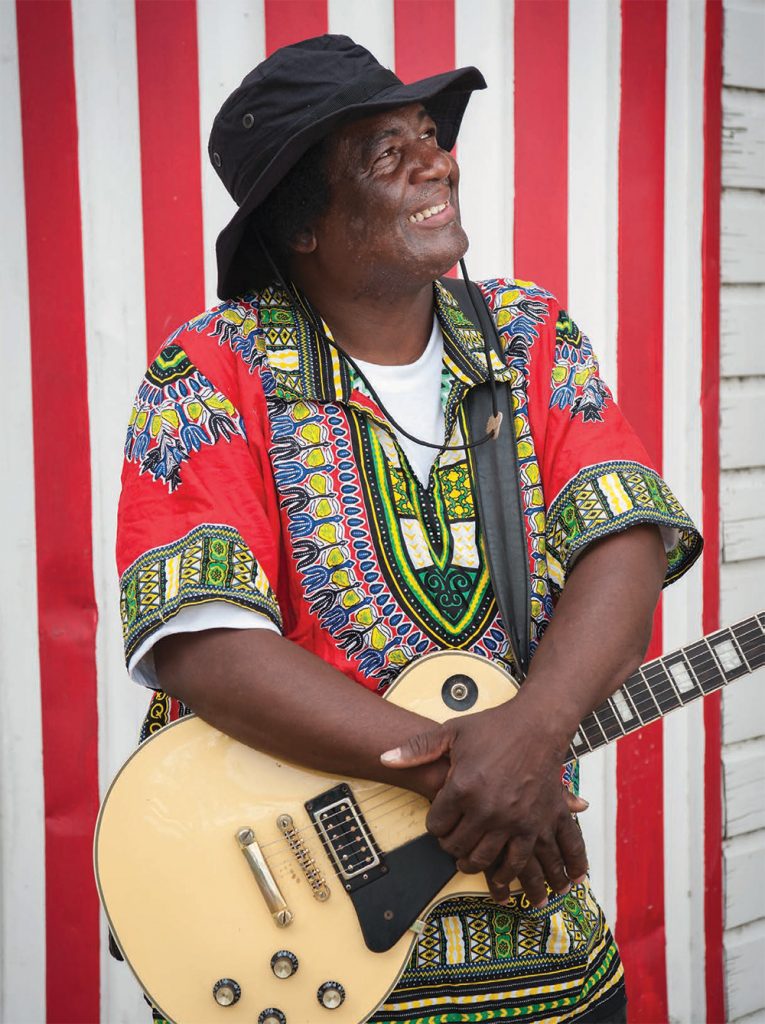 Whether it’s in a smoky club, on a flatbed trailer, at a festival, or at a wedding reception, when Jake and the Pearl Street Jumpers take the stage, it’s a sure bet that the dance floor will be crowded. For over forty-five years, the band has played Motown and rhythm and blues tunes for thousands of people across the Delta and as far away as Chicago.

“We love what we do, and we always do it with a smile,” says Jake, whose real name is Calvin Brown. “For as long as I can remember, and as long as my mama can remember, they’ve called me Jake. No one really knows why. One day a guy came to the house asking for Calvin Brown, and my mama said there was no one there by that name. She didn’t recognize her own son’s real name! We got a good laugh from that.”

The name of the band was changed, briefly, when they were booked to play at Edna’s Lounge in Cleveland. “It was a white lounge that played mostly country music. The Oak Ridge Boys were big at that time, and the song “Elvira” was always on the radio. Miss Edna asked us if we could do that song. It doesn’t take me but a few minutes to listen to a song and figure out how to play it. We practiced a little while that afternoon, and we were ready to perform the song that night. Miss Edna gave us all cowboy hats to wear, and she introduced us as Jake and the Pearl Street Cowboys. We must have played that song about five times that night and everyone loved it!”

With access to music lessons in school and the exposure to music in the Pentecostal church he attended, Jake got a good background in music to help get a band started. “And we listened to the radio every chance we had,” Jake says. “We listened to every song by every artist, over and over again.”

The little band began meeting up in the neighborhood and playing whenever they could. “It started out with me and my brother Chuck and a few other guys. Our drummer, Clyde Glenn, is a minister now, but we still get together to play whenever he is in town. Larry Morgan, our background singer, has also been with us since the beginning.”

The band now consists of Jake as the lead singer and guitarist, Larry Morgan as background singer, “Little Bud” Fortness on drums, Robert Williams on keyboard, and “Tito” on bass. “Honestly, Tito’s been with us for five years and don’t nobody know his last name,” laughs Jake. “One thing about this band is we run a clean stage. We are upbeat and we have fun, but there is no drinking or swearing on my stage. We have the cleanest band and the best attitude and stage presence of any band I’ve ever seen, and that’s the reason we have been going for so long. People know when they hire us they are going to get a great show and they don’t have to worry about anything.”

Jake says the band began playing for private parties around town, and they were invited to play at Delta State University, which was very exciting when they were first starting out. “We still play a lot of parties, and we do a few wedding receptions each year,” Jake says. “We have played a big conference at Delta State for nurses who came from around the world. We have also played several times at the October Festival in Cleveland, and Mr. Bill (Lester) has us out to Dockery Farms from time to time to play for parties and receptions.” The band has also played at the GRAMMY® Museum several times. “We were there when Bobby Rush did a speech, and we had the pleasure of opening for him. We love that the GRAMMY® Museum is in Cleveland. It’s an honor to play there every time.”

Jake says the most regular gig they have is playing for the Blues Museum in Indianola. “We do all the tours that come in from the American Queen. We do that two to three times a week. They do the tour of the museum then come over to the Ebony Club where we give them a little history lesson then play some music for them. We’ll have them dancing all the way back to their bus!” Sadly, the tours are at a standstill due to the COVID-19 pandemic, so the band’s museum gig has been sidelined for the time being.

“This has been a tough time for musicians,” says Jake. “I also play at church every Sunday, and that has been cancelled for now as well. We’ve been going online doing a few FaceTime shows, and we’ve had a good response to that. We just need to figure out how to set up PayPal or something so that we can get some tips from people watching!”

As many musicians often do, Jake has another job that provides a steady income. “I am an upholsterer by trade,” he says. “I do both furniture and automotive. I’ve been doing that for over thirty years. I have been interested in furniture almost as long as I’ve been interested in music.” Jake says that with his upholstery work, he always tries to do a good job. “I know when I’m done that others will see my work, so I always want it to be excellent. I carry that same philosophy over to the band. We put our best foot forward every time we step onto the stage.”

Firmly rooted in Cleveland, Jake says he’s never thought of living anywhere else. “I’ve lived here all my life, and I’ve only left to go to places like Chicago to sing. I think Cleveland is the most wonderful place on earth. The people here are friendly, and it’s just beautiful. I’m so proud that I live here and so grateful that we have been able to entertain people in these parts for as long as we have.”

1 thought on “Jake and the Pearl Street Jumpers”