The Sound of the Bentonia Blues 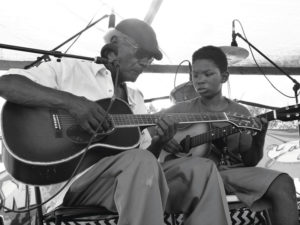 Jimmy Duck was born in 1947, one of ten children and four cousins that grew up in his parents’ home. Carey and Mary Holmes had a small farm and raised cotton and kids. And they did a damned good job of it, sending most of the children to college. To help ends meet, they opened the Blue Front Café in downtown Bentonia right next to a cotton gin and adjacent to the railroad track. The children mostly grew up in the Blue Front, which served hot meals consisting of buffalo fish and catfish, and they sold groceries and bootlegged corn liquor and even had a barber shop. Back in those days, the Blue Front closed around 10:00 p.m. each night, but during cotton picking time, the café stayed open twenty-four hours a day serving the farmers and gin workers. All the children were raised up knowing how to work and how to respect a dollar. Jimmy Duck stayed close to his mama, and by age twelve he was chauffeuring her around after she had a wreck and became afraid of driving. He helped her in the Blue Front, often being left alone to run it as a teenager. When his father died in 1970, Jimmy Duck took it over, and he has been running it ever since. 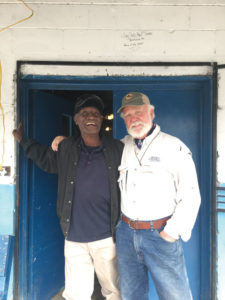 An article by Billy Watkins in The Clarion-Ledger and published in February of 2017 talks about the relationship Jimmy Duck had with his mama. “I lived with my mom, just me and her, and by the time I decided to get married (he has four children and five grandchildren), I didn’t feel like it would be fair to bring a wife into my mama’s house. Either my wife was going to have to change her ways, or my mama would. It wouldn’t have been fair to either one. So I just stayed single.” Jimmy Duck used to wonder if he could survive after his mama died.

“Hers was the first face I saw every morning and the last face I saw every night. I’m thankful she never had to suffer. She was eighty-six when God blew the whistle on her (she died suddenly of a heart attack). When she left here, I asked the good Lord to not let me grieve. And, so far, I haven’t. I still miss her. I think about her sittin’ here in the Blue Front every day. But I’ve never cried about it. I just think the good Lord took that off me when I asked Him to.”

It’s my belief the relationship Jimmy Duck had with his mama and his daddy and the way all of the kids were raised are what make him possibly one of the most unique bluesmen I have ever met and gotten to know. Jimmy Duck is all about love and respect for one another. Mississippi Delta blues lady extraordinaire Libby Rae Watson from Pascagoula says, “The thing I love about the Blue Front and the whole Jimmy Duck Holmes family is that everybody, and I mean EVERYBODY, is welcomed there. Prejudice has no place. Love abounds. Jimmy Duck is a treasure to the blues. Bentonia is a small place with a most unique sound of music, and Jimmy Duck now holds that key for the next generation. I love to watch Jimmy Duck at the Blue Front! He absolutely loves seeing people have fun! He gets a satisfied sparkle in his eyes watching the crowd. He is a giving, caring, and sharing person. That’s how he was raised. He gets enjoyment teaching young people the Bentonia tradition. I take every opportunity I can to go visit him when I travel.” In June of this year, I attended the Forty-Seventh Annual Bentonia Blues Festival on the Holmes family farm right off Highway 49 south of Yazoo City. It was a unique down-home style festival that had an aura about it unlike other big events. There was an air of togetherness and comradery amongst people that had never met but were there together to share a uniqueness of tradition and be a part of the Bentonia culture. In certain ways it reminded me of the hippie festival days when flower petals and peace signs were in abundance. But it was the blues, the Bentonia school of blues, that emanated from the stage. Guitars are tuned differently to an E minor or D minor key. Robert Gordon, a blues historian and biographer of Mississippi blues icon Muddy Waters, wrote after hearing one of Jimmy Duck’s early albums, “I’ve never been to Bentonia, but whatever’s in the water there, whatever’s haunting the ground at night, whatever gives the place its historical power, clearly lives on in these recordings.” According to Jimmy Duck, “I play for myself, and I sing from here,” pointing to his heart. “I am here to tell a story. The words have always been the most important thing to me. Blues lyrics are like life. Sometimes things are good; sometimes things are bad.” Life goes on.

The Bentonia tradition, the Bentonia school, is a way of playing a guitar unlike any other region in Mississippi. The deep rotgut Delta Blues with its wailing twelve-bar sound or the Northeast Mississippi Hill Country style with its percussion-led, hard-driving blues is totally different than the Bentonia blues. But it’s all still the blues. And it talks about lost love, money woes, and broken hearts and homes. It’s of the dirt, of the heart, and it all comes off strong. If you have the blues, there is nothing better to get rid of those blues than blues music. And there was a lot of blues in Bentonia in the early days. 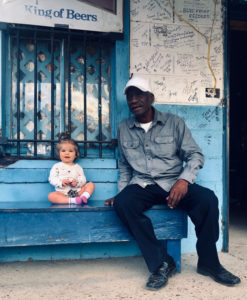 Legendary Nehemiah “Skip” James (1902-1969) was taught the Bentonia style by Henry Stuckey, playing both the piano and guitar. Skip was instrumental in the music of Robert Johnson, most notable for his supposed pact with the Devil at a lonesome crossroads at midnight.  Johnson later recorded his 32-20 blues based on a song by Skip James called 22-20 Blues. Jack Owens (1904-1997) learned the Bentonia style from James and would often stop by the Blue Front and visit and play the blues with Jimmy Duck. Owens couldn’t read nor write and had a hard time explaining to Jimmy Duck the Bentonia style but was determined to pass that distinctive sound on to him, often telling him, “Boy, you got to learn this.” According to an article in Country Roads Magazine by John Wirt, “Bentonia blues musicians tune the open strings of their guitar to a minor chord. The custom tuning gives the music a mournful, otherworldly quality.” “Right, it can be mournful,” says Holmes. “Sometimes it can be happy. Sometimes you sound like you’re way down in the swamp. That’s what makes it so unique.”

Jack Owens wasn’t the only bluesmen to stop by the Blue Front back in the day. Sonny Boy Williamson No. 2 (Rice Miller) and James “Son” Thomas stopped by to play the blues as they traveled up and down Highway 49. Son Thomas often would bump his voice up an octave and sing in the “falsetto” style which could lend quite an eerie quality to his music, reminiscent of the Bentonia style. Today, blues musicians and guitarists come by and ask Jimmy Duck if they can hook up and play, and they are always welcome to, often times being joined by Jimmy Duck himself. The blues is a communal music, a lyric here, a straining guitar rift there, an ethereal wail or a mournful plea for a lost lover…it’s the blues, Baby.

So what is it that makes the Blue Front so special? Of course, its Jimmy Duck, but it’s the entire scene: the family folks that are always there, the foreign blues travelers that have as part of their itinerary a stop and a visit along with a picture in front of the Blue Front, the local worker that stops by for a beer on the way home and sits to talk. I have been consoled and advised by Jimmy Duck himself regarding the pull of heartstrings by a lost love (“at our age, my friend, it ain’t about the women; forget ‘em. It’s about the grand chillen’!” Yeah, right!!?) And one afternoon recently, while waiting on Jimmy Duck to show up, I spent an hour or so leaned up against the back bed of his brother’s truck. As we shared the same bottle, I listened to sage advice about family, and I learned well-taught and received business lessons. I felt at home.

Jimmy Duck Holmes is never happier than when he is in the Blue Front. “I pretty much grew up in here. I sleep at my house, but I live here. Seriously. I always knew the Blue Front was going to be a part of whatever I do.”  Returning home from one of his trips overseas, where he spread the Bentonia blues, Jimmy Duck stated, “I feel at home just about anywhere I go. I love playing music for the folks, and they’re all real nice…But I like to stay common. I like to keep my music that way too. So I don’t mind telling you, it feels awful good when I get on that airplane and I know I’m heading back to Mississippi.”