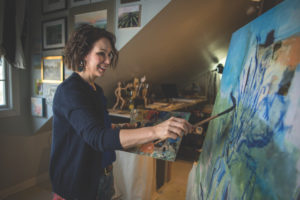 Growing up in her home in Ardmore, Oklahoma, Kellee Mayfield was fortunate to have been surrounded by plenty of great artwork. “There was one painting in particular, a portrait of my grandmother that was painted by an artist in New York in the 1930s, that I was always drawn to.” Yet in school, Mayfield was pushed towards science. She graduated college and went on to become a successful sales rep for a medical device company. “I sold pacemakers for the heart, and I was often in the operating room when they were implanted.” Mayfield worked the Delta region, almost always on 24-hour call.

While she had a passion for science, Mayfield also developed a growing passion for art. “After college, I attended an oil-painting workshop and I really liked it. I began dabbling in oils in 1991, and started painting seriously in 1993. My grandmother, who could be a bit picky, said she liked my work. That was encouragement enough for me to keep going forward.” 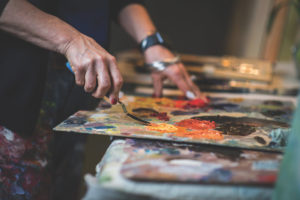 Mayfield married Brad Mayfield, an Arkansas native. “We met on a blind date 20 years ago,” she says.  When the couple moved to Mountain View, Arkansas, in the middle of the Ozark Mountains, she was delighted to learn that it had a strong art community. “I took classes and one of my teachers took me aside and said ‘Kellee, you need to keep painting.’” That was further encouragement for the budding artist, who continued to paint with oils until after the birth of her daughter. “Oil painting can be very messy, and it takes a long time to dry. That didn’t fit in very well with my lifestyle as a new mother.”

But Mayfield continued feeling the urge to paint. A friend came up with a solution. She suggested that Mayfield use pastels. “It was like painting with oil, in that I could mix the colors. I did it for a while, but I didn’t like having to put the finished products under glass to preserve them.” In looking for an alternative, a local art shop merchant suggested that Mayfield try fast-drying oil paint. That seemed to be exactly what the artist was looking for. 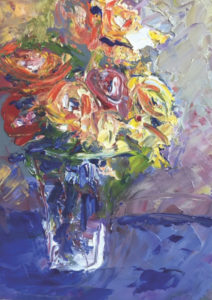 Mayfield and her husband moved to Lake Village, Arkansas in 2007. “We came here because of his job and my friends thought we had lost our minds. But it wasn’t long before I fell in love with Lake Village.” Learning the ways of the Delta, and falling in love with the friendly people made it easy for Mayfield to feel right at home. “I had to get used to the fact that finding things like quinoa would be difficult. But what I learned here is that folks can take the most ordinary thing and put it on a pretty platter and dress it up and make every occasion feel like the grandest celebration. They know how to make it fancy.” She began writing a blog titled “Delta Moxie.” “I told my friends back home that you have to have a lot of moxie to live in a place like this, which I had plenty of.” Blooming where you’re planted became a way of life for Mayfield, who likes to point out to bigger city folks that there is no Starbucks within a 90-mile radius of her home. “You may be able to find some served in the casinos, but who goes to a casino for Starbucks?”

Mayfield’s husband is a general surgeon at Chicot Memorial Medical Center in Lake Village. “His office was my first gallery as we needed art for his walls.” Around 2013 to 2014, a unique thing happened that altered the course of Mayfield’s art career. “I learned about a woman in California who did one painting a day for a month.” She heard about it on a podcast and thought it would be a great way to hone her craft. “They weren’t large paintings. Most were small in size. I posted each day’s painting on Instagram. My goal was not to be self-judgmental, but to put my work out there and let those who viewed it be the judge as to whether or not they liked it.” 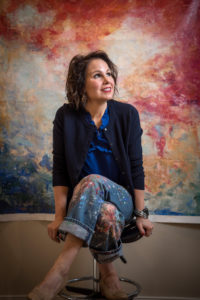 People took notice of her paintings and began contacting her to do commission work. Lee Margaret Hamilton, who founded SoDelta Candles, became a big cheerleader of Mayfield’s work. “Lee Margaret has always been enthusiastic about my work and she’s had great confidence in me.” Mayfield’s work can be found at SoDelta’s studios in the old McCormick Bookstore building in Greenville. It is also exhibited in the Midtown Grill in Greenville.

Rural. Resourceful. Sparkle. That’s the tagline that Mayfield has on her artwork, which features Delta scenes, and everyday objects that are glorified in her work, from onions and egg cartons to cows, rice fields and cotton. Mayfield has taken several art trips to Italy and France, where she does plein air painting. She was the artist-in-residence at Chateau Orquevaux in France last fall.

“Everyone talks about the light in Europe, and it is magnificent, don’t get me wrong. But when I come home to the Delta, the light here is simply wonderful. Art is about conveying light and shadow, and I love it. I love the way the light hits on the fields and the trees here. I used to have to drive to Tupelo a lot for work, and I really love how the light comes through the trees on the Natchez Trace. It’s so beautiful.” 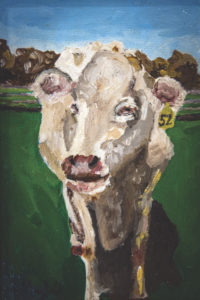 It’s not unusual to see soybean fields depicted in Mayfield’s work, and for good reason. For three years now she has served as an ambassador for the Arkansas Soybean Promotion Board. She shares unique and creative ideas on using soy-based products for lip balm, lotion and candles. “I have soybeans growing in my front yard and in my back yard!” She includes DIY recipes on how to make products for the body and home using soybeans on her blog and on Pinterest.

Mayfield is also painting canvases for Paul Michael and Co. exclusively for the Round Top market. “They are large format abstracts – five feet by seven feet, used in large spaces. That has been a real game-changer for me. That, and the internet, which has changed the way art is marketed, discovered and sold.”

Mayfield’s work can be seen on her Delta Moxie Instagram page @deltamoxie.