Young Clarksdale prodigy is blazing a path for the next generation of Delta blues. 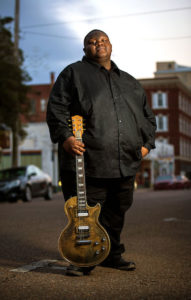 Christone “Kingfish” Ingram is poised to kick down the door of the music world. The twenty-year-old Clarksdale native is a masterful guitarist, vocalist, and songwriter who is considered to be a rising blues prodigy and has been referred to as one of the most exciting young guitar players to come along in years.

Ingram’s musical chops come naturally. He was raised in a family plays that plays the blues, and his mother, Princess Pride, is first cousin to country music legend Charley Pride. His first memories of hearing the blues are still fresh, and he credits his father with getting him hooked by playing Muddy Waters albums and for buying him his first guitar.

At the age of eight, Ingram enrolled in musical education classes at the Delta Blues Museum, where he started on bass guitar. He eventually moved to the guitar at fourteen and quickly mastered the instrument. “I was taught basics in museum program, but I would watch YouTube videos and teach myself new songs. I just practiced a lot,” he says very casually as if there’s nothing to it all. 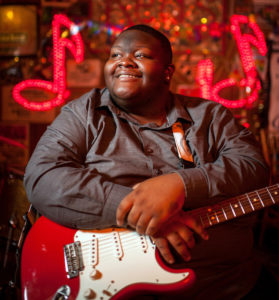 Shelley Ritter, director of the Delta Blues Museum, remembers a young Christone coming to music classes at the museum. “Even at a young age, you could see how interested he was. He was always paying close attention to the musicians and performers. Ritter recalls on several occasions, Ingram would run up to her and excitedly say something along the lines of, ‘Guess what Miss Shelley? I taught myself a John Lee Hooker song this weekend.’ You could see he had passion for it even when he was young. It’s been incredible watching him grow that talent.”

Richard Chrisman, one of Ingram’s instructors at the museum, remembers him being a dedicated student. “You could tell he was going home and practicing and putting in time. Some kids just show up every week, and you can tell they haven’t touched a guitar in between classes. But he put in the work, playing nonstop.” Chrisman laughs and says, “I’m sure he could play circles around me now.”

Ingram credits his education at the Delta Blues Museum for a lot of his early success. His first time to play in public was through the museum program when his class played a show at a public library and then later a show at Ground Zero Blues Club. “It was nerve wracking at first,” he remembers. “It still kind of is nerve wracking, but I got used to it and began to enjoy playing for people.” 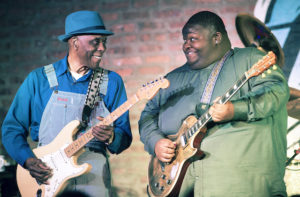 The unusual name Kingfish is also something that he can credit to the Delta Blues Museum. The name was given to him by his music teacher, Bill “Howl-N-Madd” Perry, someone Ingram considers a mentor. Perry gave nicknames to all his students, and the ones that stuck morphed into stage names. Kingfish was bestowed upon Ingram because he was said to remind Perry of an Amos ‘n’ Andy character of the same name.

Ingram didn’t always care for the nickname. “I didn’t like it at first. But it stuck, and that’s what I became known as.” He goes on, saying, “I decided to keep it as a professional because the ‘King’ part reminds me of Albert, Freddie, and B.B. And the ‘fish’ part reminds me of Muddy.”

He’s well aware that not a lot of people his age are into the blues. “You don’t see a lot of young black kids who have my feeling for the blues. They’re listening to mostly hip-hop, and they just don’t get into the blues because it’s old, I guess. I listen top forty too, but I feel the blues is my culture. Both as a Delta native and as a traditional African-American art form,” he explains. 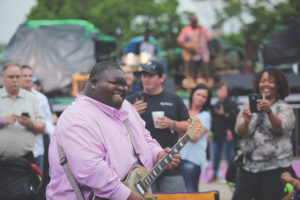 Ingram portrays an attitude toward music well beyond his age. He is a student of blues history and enjoys listening to the legends who came before him. He counts musicians among his influences that most kids his age have never even heard of. He has a really wide range of musical influences that move beyond the blues and into soul, rock, and even heavy rock genres. He takes a deep breath and lists names like Eric Gales, B.B. King, Prince, and Ernie Isley. “Probably too many to name,” he tells me.

But they all come through in his music—a sound steeped in history and tradition. He creates a unique sound that echoes the blues without copying the past and manages to advance the traditional sound. He describes it, saying, “I try to include different genres, try to mix it and evolve the sound but keep it rooted in tradition.” The final product Ingram calls “rock but still bluesy in the foundation.” 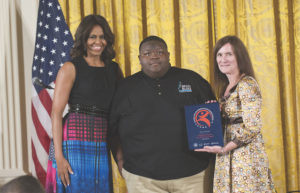 Ingram started gaining notoriety in the music world about five years ago. In 2014, along with his Delta Blues Museum classmates, he was invited to perform in the east wing of White House for Michelle Obama. At age sixteen he was presented with the 2015 Rising Star Award by The Rhythm & Blues Foundation.

Kingfish’s appeal beyond the blues world was immediate, and his music has taken him all over the country and to Europe. He’s made appearances on The Rachel Ray Show as well as The Steve Harvey Show. He was cast in season two of the Netflix show Luke Cage after a producer saw one of his videos. Two of his cover songs appear on the show’s soundtrack album. Through the Luke Cage connections, he was able to meet and collaborate with rap legend Rakim for a Tiny Desk Concert on NPR.

“It’s all been awesome,” he says of his recent successes. “Getting on the Luke Cage soundtrack and going to the premiere in DC was great. And playing with Rakim was dope too. It was a lot of fun.” Of the Rakim concert, he says he actually learned the songs on way to the studio. But you wouldn’t be able to tell that just by watching the performance.

In between shows and appearances, Ingram likes to play video games, learn about conspiracy theories, and spends a lot reading and watching documentaries on Netflix. “If I wasn’t doing this, I would probably be working in a factory or have some kind of day job. I’m grateful for the opportunity that the music has given me.” 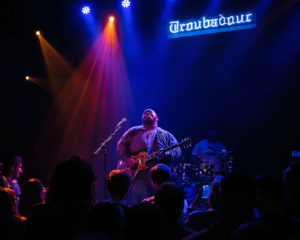 He is now hard at work promoting his debut album, Kingfish. The album was recorded in Nashville, produced by industry veteran and two-time Grammy winner Tom Hambridge, and features collaborations with Keb’ Mo’ and blues legend Buddy Guy. Kingfish will be released on Alligator Records, and Ingram holds the distinction of being the second youngest artist signing in the record label’s history.

Bruce Iglauer, president of Alligator Records, has been aware of Ingram for a number of years as word of this guitar prodigy traveled fast around the blues festival circuit. “I first saw him five years ago at The King Biscuit Festival in Helena, Arkansas,” he recalls. “He was very good then, of course, but his playing has matured so much. Now he knows which notes have punch and which ones tell the story.”

Iglauer is impressed with his singular focus and growth as a musician. “He knows the blues isn’t cool for kids his age, but he was determined to be a blues musician,” Iglauer says. “He loves the music, and he feels it. He’s matured as a singer and a storyteller, and now he’s at a world class level.”

Ingram is already at work on his next album and is excited for some upcoming collaborations that he’s not able to speak about yet. Next up is more touring and exposure for Ingram, including several dates with the band Vampire Weekend where he will open their shows on over a dozen tour stops.

Iglauer, like most people in Ingram’s circle, is excited and hopeful about the future. “I believe he’s going to be one of the most significant blues musicians of his generation,” he says. “Kingfish is the cutting edge of blues.”

Kingfish will be available on May 17. Learn more at www.christonekingfishingram.com