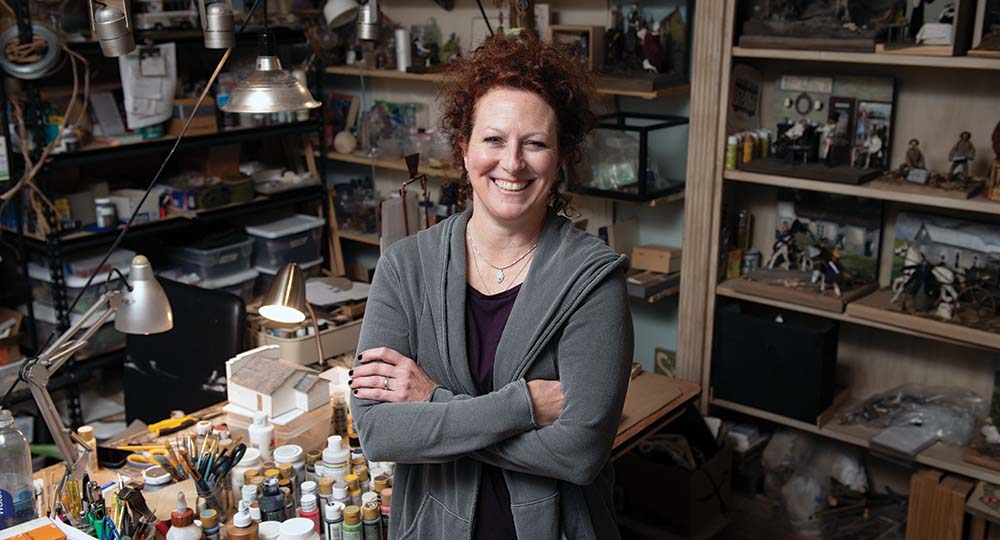 The world of Lee Harper is magical and miniature. Her artwork consists of perfect scale models of treasured places in Mississippi, some still existing, while others exist only in memories. The work is mesmerizing, accurate in every detail.

Lee didn’t plan to be a miniature artist. It started fifteen years ago when her son was a young boy. “I really have a disdain for Elf on a Shelf,” admits Lee. “But I guess I like the concept because at Halloween I thought it would be hilarious to have a skeleton doing something funny each day. I did it each day for a week leading up to Halloween, and my son loved it.” Each day the scene got more intricate, and her husband posted them on Facebook. “People loved it!” It became an annual tradition which she also shared with her niece and nephews. “But they got older and clearly didn’t care anymore, so I started doing more obscure history scenes and true crime events.” 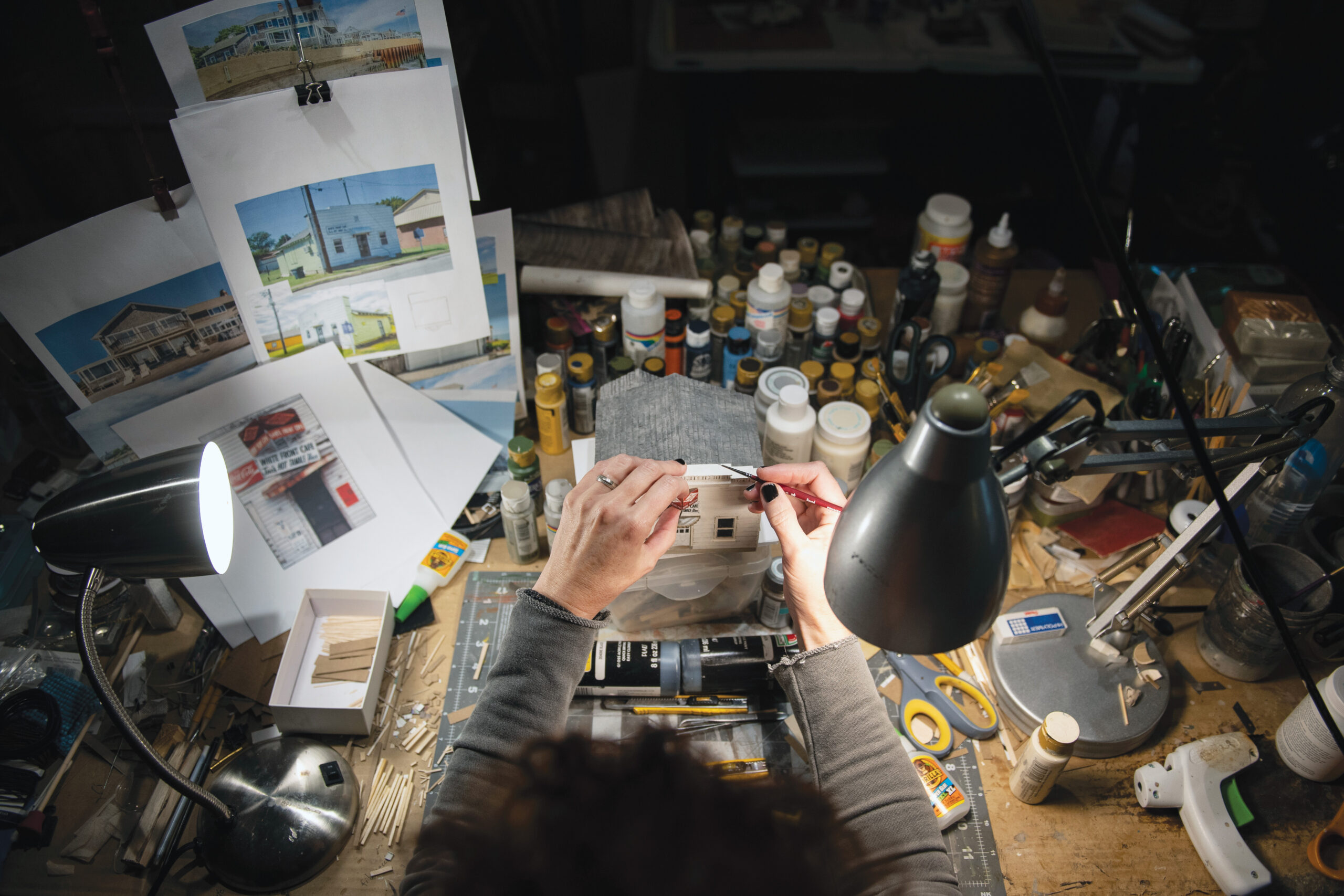 During that time, Lee was painting commissions for others, but the miniatures she created were strictly for her. An active supporter of the arts in her adopted city of Oxford, Lee was invited to submit a piece for the annual Christmas ornament auction at the Powerhouse Art Center. “I wanted to make something really cool and different.” She created a miniature version of The Hoka, an Oxford institution owned by the late Ron Shapiro. “It was a hit and several people wanted one. Ever since, I’ve been going gangbusters!”

The work Lee does is sentimental. “I do a lot of commissions, and there are always interesting stories to the places that are important to people. I’m especially interested in buildings and places that no longer exist.” Many of her works can be seen in her book, Tiny Oxford Volume 1: Mississippi Memories in Miniature. “Only one of the buildings in the book still exists today.” 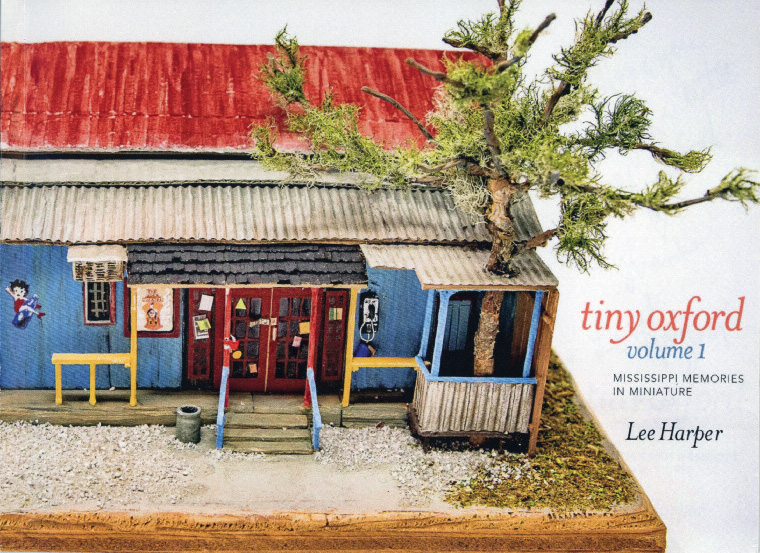 Lee has now immortalized several iconic buildings in the Delta with her detailed miniatures. “I love the entire process. I put on many hats as I go, from researcher to investigator to genealogist then to maker, engineer, bricklayer, and roofer. I’m actually putting a roof on a building today!” Each piece begins with research, which Lee loves. “I seek out photos and even look at blogs posted by travelers. If I can find a Google Earth aerial image, that helps me tremendously because seeing the roofline gives me perfect proportions.” Even then, Lee admits, it’s a matter of eyeballing something to make sure it looks right. “There is a lot of trial and error involved in what I do. I keep moving things around until I feel good about it; then I glue it.” 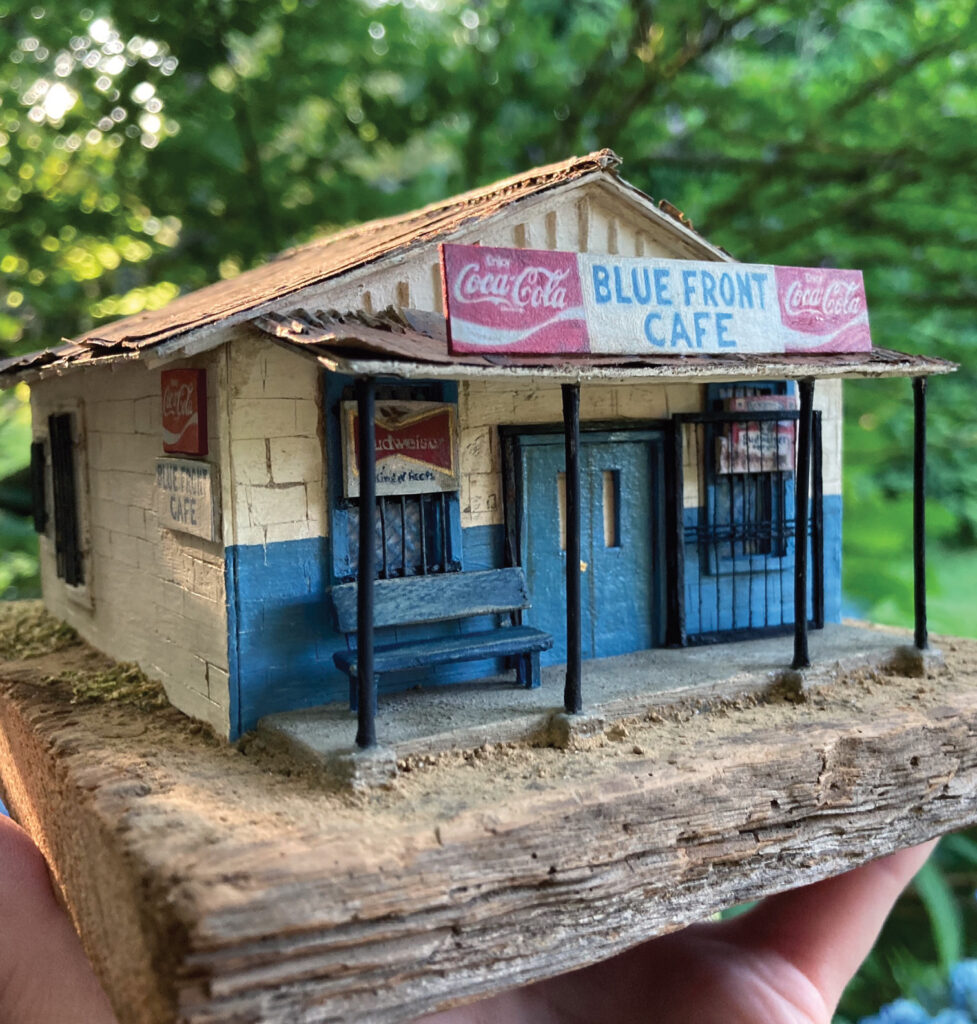 The engineering aspect can vary. “I did a miniature of the Standard Life skyscraper in Jackson. It required me to use a lot of math, including fractions and angles. It was really hard to do, but I was very happy with it.” Then there’s a building like Po’ Monkey’s juke joint in Merigold. There were no architectural plans, no CAD drawings, no blueprints. “It’s a rustic old building that has had rooms added on to it over the years, and that’s the beauty of it. I love it when something is a bit rough and not so perfect. I love creating the aging tin, the signs posted outside, and the paint-worn siding. As a maker, I had a total blast with that project. For me, it is more fun to focus on something old than something brand new.” Lee relies heavily on photographs when making her miniatures, and she called on photographer Will Jacks, who has a book out about Po’ Monkey’s. “I thought he may have what I needed in his stash of photos, but, instead, he drove over there and took photos for me. I had no idea when I called him that he lived right down the road from Po’ Monkey’s.” 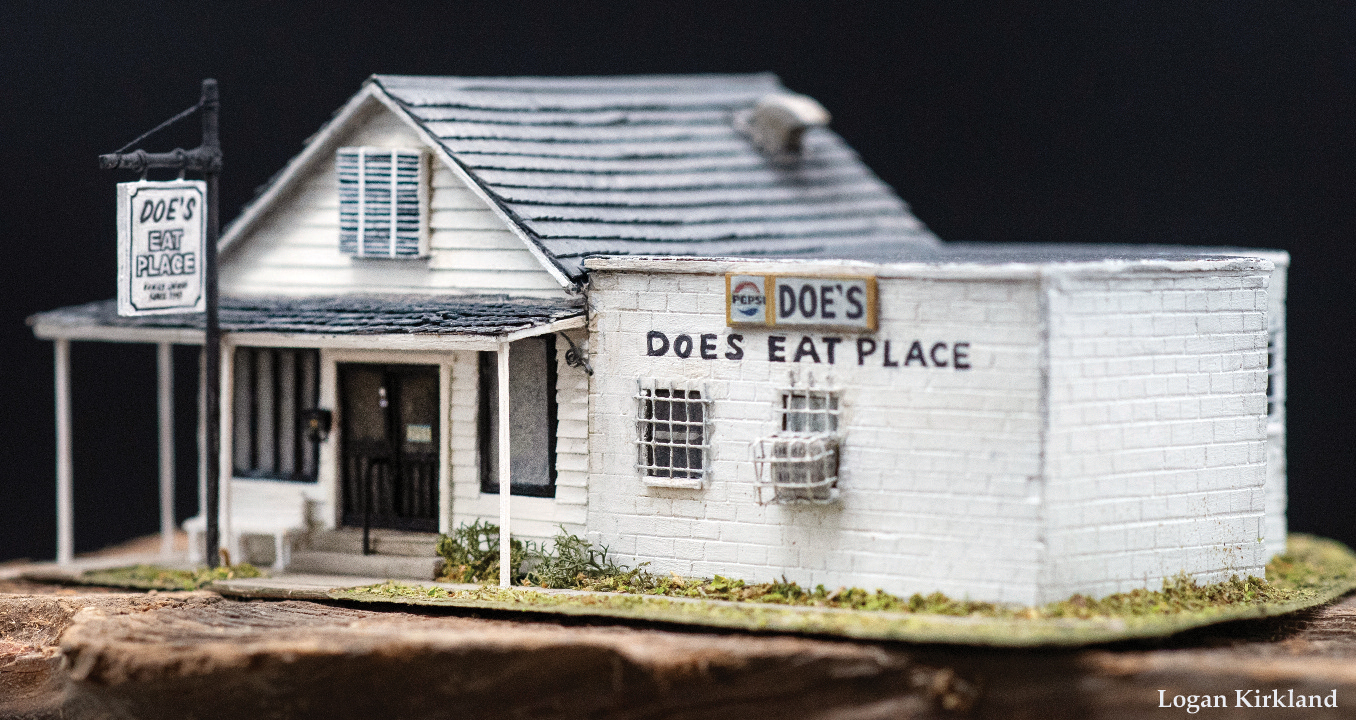 Another Delta icon Lee has created in miniature is Doe’s Eat Place in Greenville. “That was interesting because I couldn’t find a picture of the back side of the restaurant at all. I looked all over for every picture of Doe’s I could find, but who shoots the back of a restaurant? I called someone whose work I really admire, Euphus Ruth, and asked if he might have anything. He said he’d send me something. He went to Doe’s and took photos with his phone and sent to me, which was awesome. It saved me a four-hour trip!” 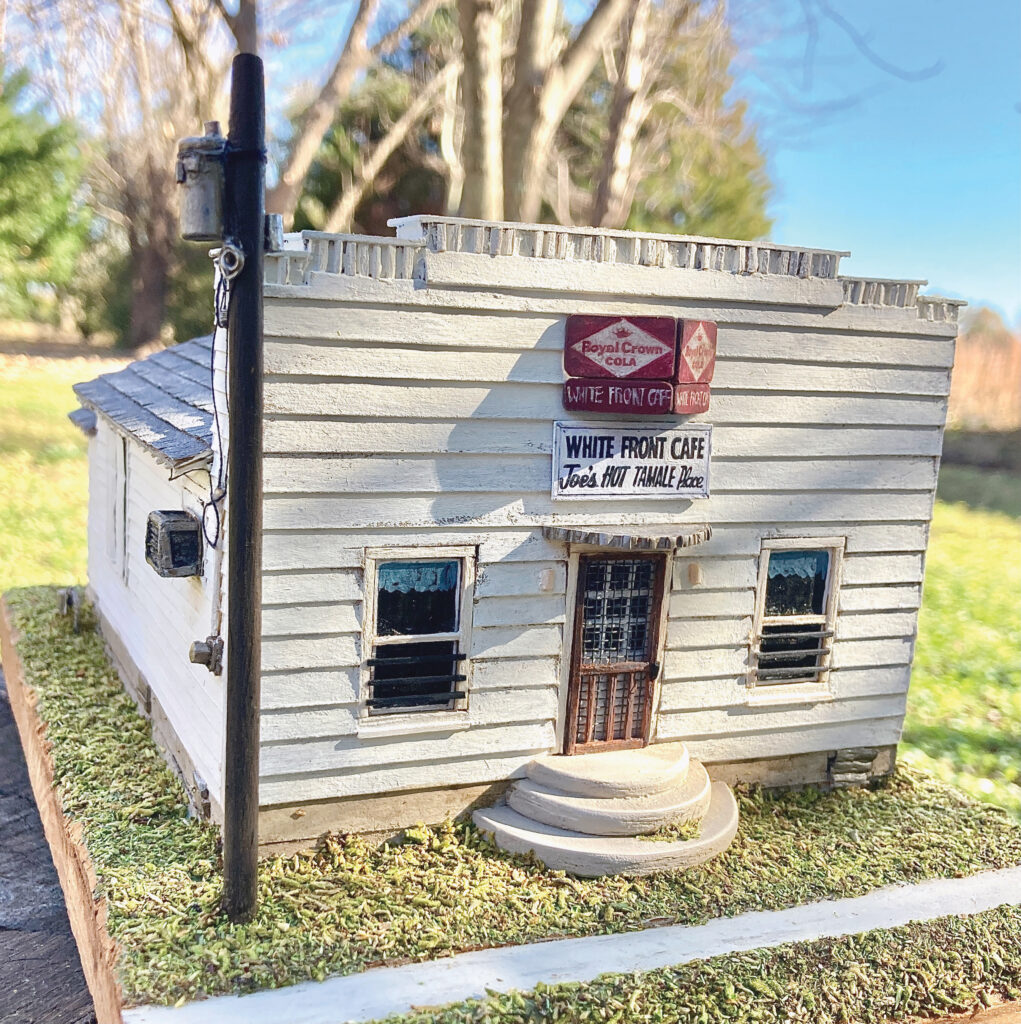 The White Front Café is another iconic building Lee has created in miniature. “I have done countless commissions as well of places that hold special meaning to people, including their own homes. I am a working artist, and I love making things for other people. However, sometimes I get a wild hair and I want to make something that’s mine.” One of those is a recreation of a scene from a Bill Ferris photo. “There is a watermelon truck in the photo that is just like the one my great-grandparents had. I found a model truck, and I beat the hell out of it to give it the aged look in the photo. It was harder than you’d think—hats off to the maker of that toy truck!” After she gave the truck the appropriate dents, she painted it, giving it the same patina as the truck in the Ferris photo. Next, she painted the religious signs that covered the truck. “I am fascinated by extreme evangelism and religious customs such as snake handling—not in a disrespectful way, I’m just really fascinated by it.” The bed of the truck is piled high with watermelons for sale. “I made those out of oven-baked clay. When I took them out of the oven, they looked exactly like white Tic-Tacs.” 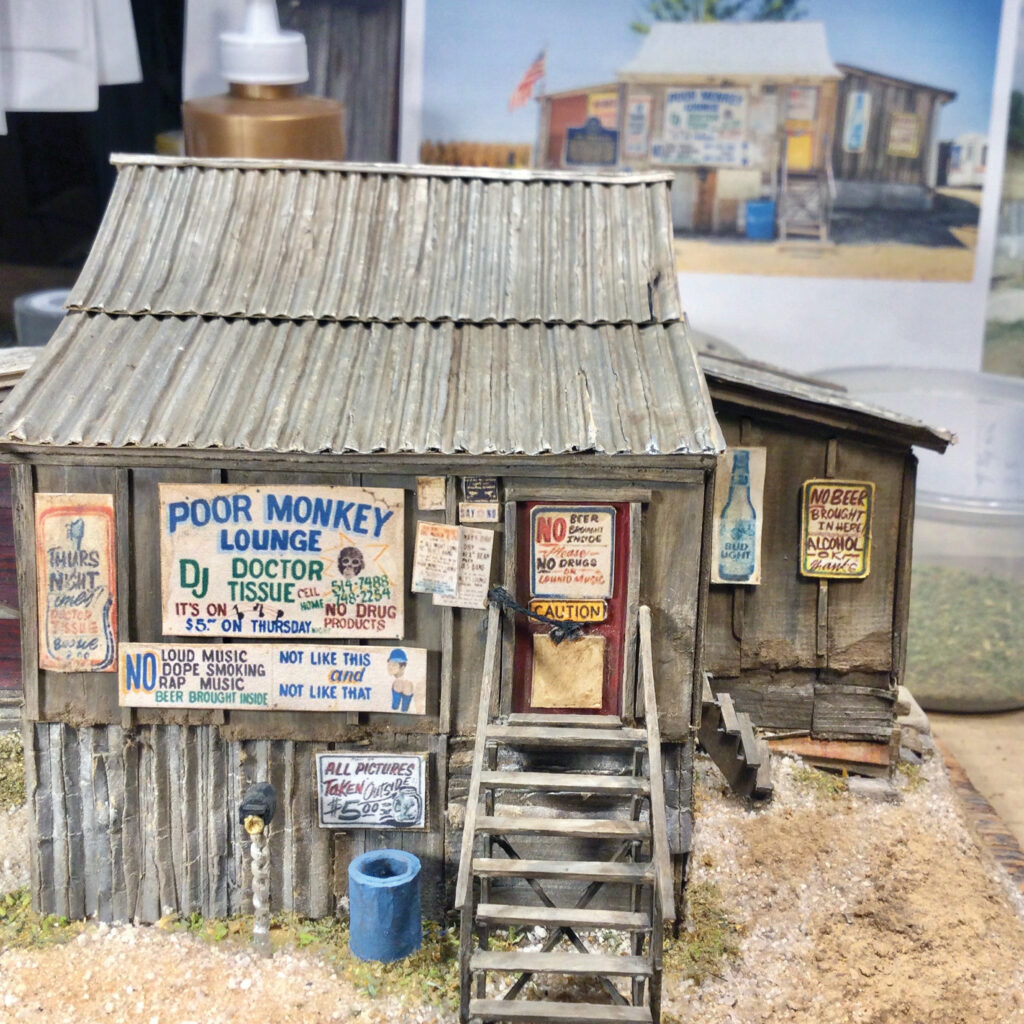 Lee’s work can be seen in a new book called Buildings of Mississippi by Jennifer Baughn. “I did a miniature of Medgar Evers’s home in Jackson. I looked at photos to learn more about it and found it both fascinating and heartbreaking.” The book also includes her miniature of the Standard Life Building and Po’ Monkeys.

2 thoughts on “Lee Harper—Meticulous and Mesmerizing”