Leslie Barron — A Study in Contrasts

Equally inspired by seashells and Chagall, the work of Memphis artist Leslie Barron incorporates serious formality with a generous dose of whimsy. 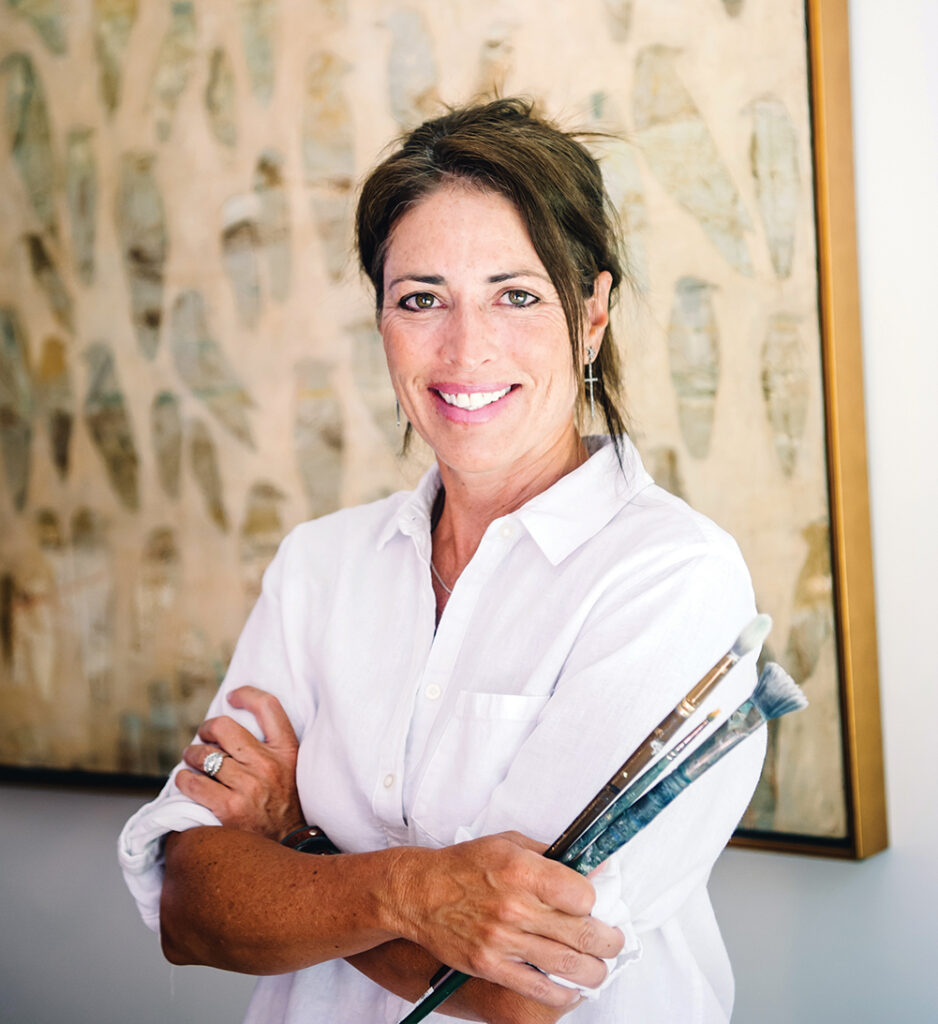 As I sat down with Memphis artist Leslie Barron and talked about her life, I was reminded of the hilarious book by British author Allison Pearson, I Don’t Know How She Does It, which was later made into a popular movie. The book is about the hectic roller-coaster ride of being a working mother in today’s world, and, believe me, Barron is the embodiment of just such a mother.

She is an incredibly successful artist, painting huge canvasses which can take several weeks to complete, and at this very moment twenty-two commissions are awaiting her deft, creative hand. At the same time, sons Buzz and Wiley, husband Doug, and beloved dog, Agatha, all depend on her, and, by the way, she plays a lot of tennis in her “free” time. 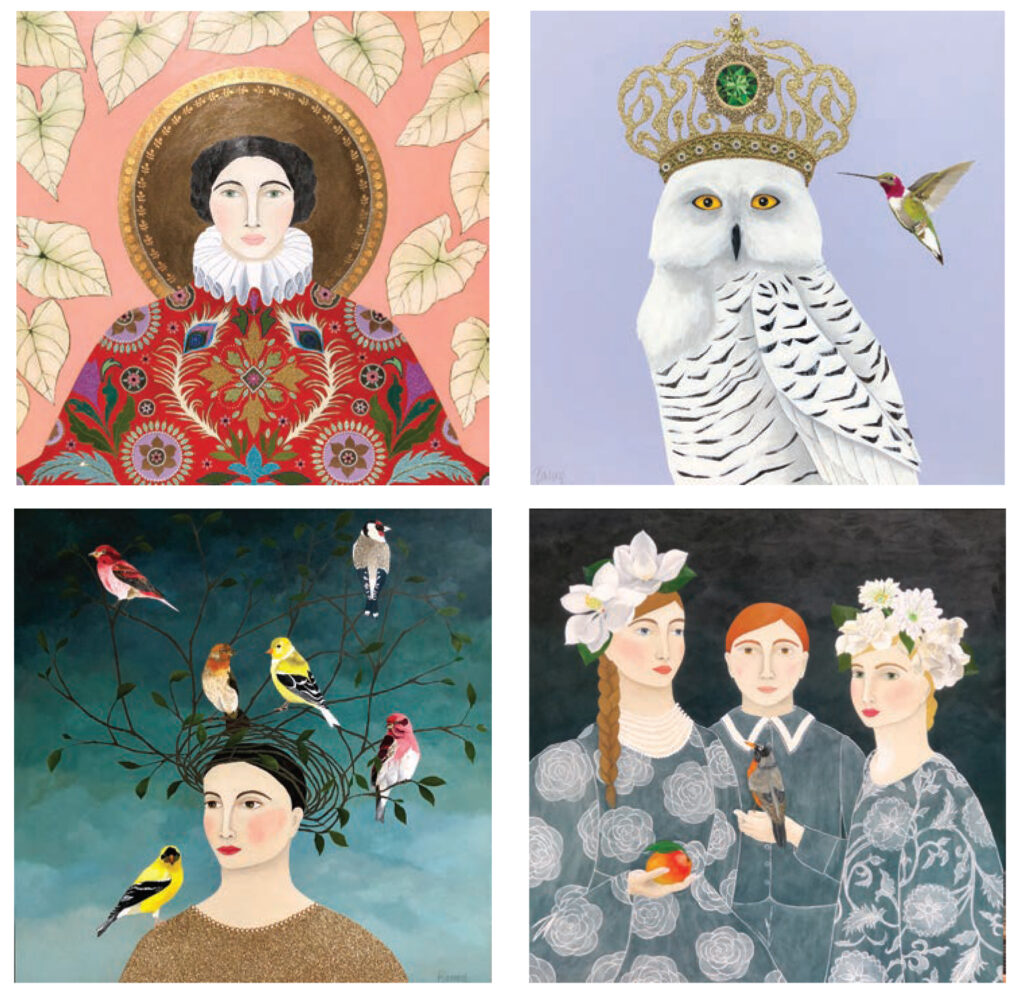 Barron hails from a family of artists, so it can be said that she comes by her talent honestly. Dating back to the 1920s, her great-grandfather painted covers for the Staley Journal published in Decatur, Illinois, as well as backdrops for vaudeville shows. Her father’s uncle produced pen and inks with watercolor washes; her father himself can draw, and her mother is a folk artist. As for herself, she says “I have been creating art for as long as I can remember.”

Barron was raised in Memphis and attended Germantown High School where she thrived in famed teacher Norma Early’s AP art classes. Upon graduation, it was a toss-up between law school and art school, and, fortunately, Barron chose the University of Memphis for her BFA as a painting major and art history minor. It was a world-class art department where she was blessed to study with the likes of the late Dick Knowles and the late Steve Langdon as art professors.

Barron is gracious in her praise for all those who helped her along the way; “her first real break” was showing with Rodgers Menzies and Keith Headley at their interior design shop.  It was then she realized “she could paint for a living.” This success was followed by showing with Diane Laurenzi at her store near Overton Park.  Contributing to the “Hall of Unity” at Le Bonheur Children’s Hospital with seven paintings, including a series of five houses of worship, was a dream commission for Barron. She is eternally grateful to Linda Hill, director of art at the hospital and her committee including Linda Ross, Dianne Papasan, Elizabeth Farrar, and Brenda Wiseman for giving her this opportunity which “skyrocketed her career.” 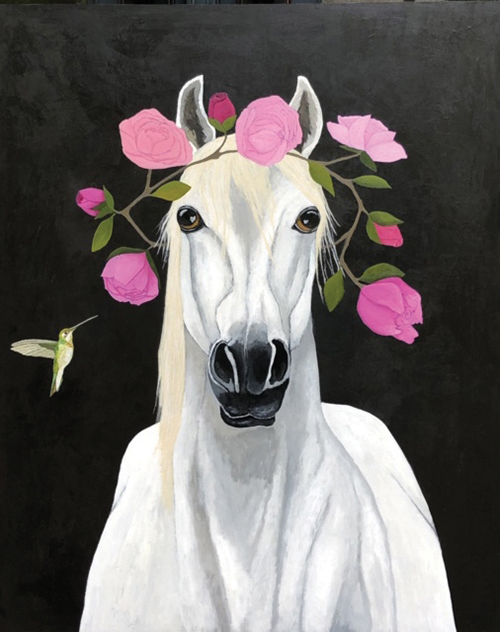 Barron has always chosen to show with galleries “if I like the artists they represent.” Here in Memphis she has shown many times at the L Ross Gallery and also points to wonderful galleries in New Orleans, Nashville, and Dallas. She has shown as far afield as a gallery in Edgartown, Massachusetts, on Martha’s Vineyard which led to some international interest.  However, she is not taking on new galleries for solo or duo shows at the moment as it is hard to provide all the content they require. She has been run ragged by deadlines that often necessitate working fifteen hours a day with everything else in her life being put on hold.

Her usual timetable is to try to paint two commissions a month and then one or two paintings she wants to paint “that pop up in her mind.” Due to her profile on Instagram, there is a lot of interest in her work.  She is backed up, but people “are thankfully patient and willing to wait up to two years.” Barron has to pinch herself when people love her work and says, “I still can’t believe it.” With so many wonderful working artists in the world, she feels blessed and grateful for this success. 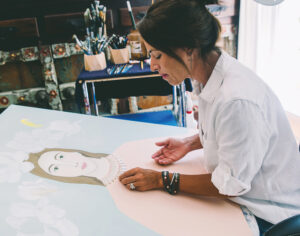 Barron’s paintings are large, and that is because she just gets so excited about all the elements she wants to include. It is hard to pin down an artist to explain his or her works; whimsical, playful art features women and animals, and birds, lots of birds. She has been quoted as saying, “I am trying to create an environment within each piece that stirs up some emotion or curiosity in the viewer.” There is a folk art quality to her creations, and in the “lady portraits,” the women form a structure onto which she can incorporate all the elements she loves—both painted and sometimes found objects. These could be vintage jewelry or fabrics, flowers and birds, all of which give a collage-like feel to her work. One interesting aspect of Barron’s creative process is that she doesn’t do sketches in advance of a painting; instead she writes her ideas down.

It is no surprise that two of her favorite artists are Matisse and Chagall, and like Matisse she uses a lot of color and pattern.  At the same time, her ladies have serious faces—a certain stiff formality which, in a way, takes its inspiration from the portraiture of English and Dutch paintings of the Renaissance. You might be surprised to learn that Barron also loves Jackson Pollack, the major abstract expressionist. She tells me that as her work has evolved, she is leaning more and more toward abstract art, feeling it “lets loose her creativity in a different and less detailed way” than the lady portraits that are her bread and butter. 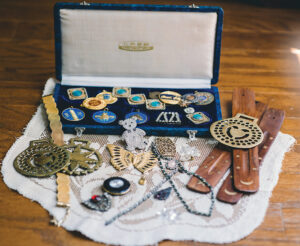 I asked where some of her inspiration comes from, and Barron quickly responded, “the beach.” She is obsessed with the colors and shapes of shells, and, in fact, when we met, she had just returned from a getaway trip to Orange Beach, Alabama, where she had found the shelling to be incredible.  She employs the full gamut of mixed media—acrylics, papers, graphite, colored pencils, and oil-based washes—in her paintings.  One day she would love a detached studio, but for now she uses the downstairs master bedroom in her Germantown home as her studio.

Barron says sometimes “she just has to put down the brush.” Her son, Wiley, is a top-ranked young tennis player, and she travels with him to tournaments. Her husband, Doug, is a pro golfer on the PGA Tour, and after a hiatus, she is proud of his comeback win last year in the Dick’s Sporting Goods Open in Endicott, New York. Last but not least, Barron’s other passion is rescuing dogs, and she is in the process of adopting yet another one. In this connection she points to the great work being done in Clarksdale, Mississippi, by the Clarksdale Animal Rescue Effort and Shelter. Now I think you will agree with me in saying, “I don’t know how she does it,” but aren’t we glad she does.