Alias family’s cabin is full of treasures old and new 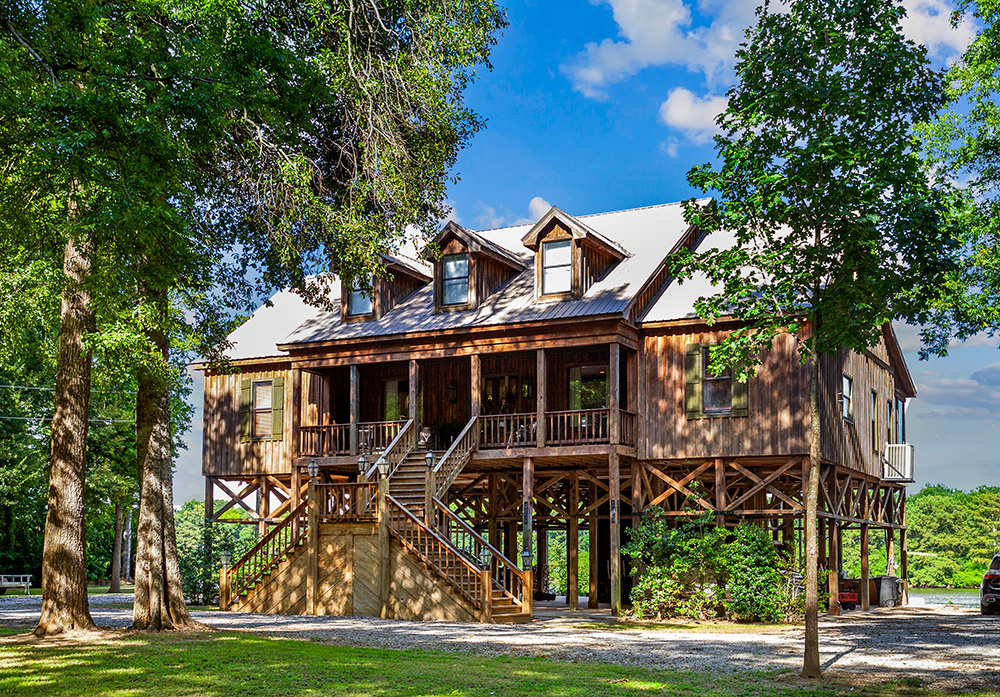 William and Margaret Anne Alias’s cabin at Miller Point Rod and Gun Club, behind the levee near Clarksdale, holds tight to childhood memories of the Delta outdoors and ensures that passion will carry on to the next generation.

Its construction dates to the couple’s 2003 engagement, but the idea of it reaches even further back, rooted in William’s visits to his grandparents in Clarksdale and holidays, weekends, and summer days immersed in outdoor fun. It’s a rite that started as early as age three on hunting trips with his dad in the Delta.

“Truthfully, I just fell in love with being on the other side of the levee and the Mississippi River bottoms,” William says. “To me, it was a little boy’s paradise,” from the starry night skies to the freedom-filled days. The dads at Ward Lake Hunting Club would sit their boys down yearly with a single rule. “We could do basically anything we wanted to do, as long we stayed on the inside of the levee,” he says, fondly recalling the dirt roads where he learned to drive at age ten and the little Jeep he and his friends shared.

“You can hunt all over the country, and there are some amazing places everywhere. But there’s nothing like being in the Mississippi River bottoms…. All the hardwood trees and the little sloughs, there’s just a feeling of, you’re Huckleberry Finn.”

He loved the hunting clubs behind the levee. “They all have a great history to them…. They’re all special places,” William says, and it became his dream in life to join one. Once he started working at age twenty-two, he felt driven to achieve it.

Now, at their Miller Point cabin, he passes that Delta love along to their two daughters—Mary Beech, ten, and Kate Carson, six. “I love taking them out there.”

Decorated for fall entertaining, the Aliases’ two-story cypress cabin comes alive with autumn’s earthy hues and an abundance of fresh flowers that go beyond the usual sunflower standbys. Oxford interior designer Allyson Duckworth, owner of Pearly Peacock Design, fashioned tablescapes and arrangements for the dining room and kitchen island and wreaths for the front doors to bring in the crisp colors of fall. Pumpkins and pheasant feathers factor in too, pulling in harvest and hunting notes.

“To me, nothing’s better than fresh flowers at a dinner party,” Duckworth says. “We tried to make it very fall and warm and inviting.” The contrast with meaningful heirlooms on the table—William’s grandmother’s Francis I sterling, Margaret Anne’s grandmother’s silver goblets and mix of Bernardaud, Deshoulieres, and Grainger Worcester china—forms a festive setting that invites lively stories and loving memories. “The whole point of having dinner around a table is to have communion,” Duckworth says, and with legacy pieces, even the spirits of departed loved ones can pull up a chair.

Flowers also perk up the wet bar, where locally grown figs and dahlias call attention to the portrait of Margaret Anne’s Tennessee Walking Horse, My Jackie O, and a set of silver shot glasses, passed down from William’s grandfather. “Big Shot,” “Just a Shot,” and “Little Shot,” say their engravings—a cute nod to both hunting and entertaining.

William’s cabin dream and the family’s cabin enjoyment have been steadfast—its walls, a little less so. But the 2011 flood that ruined a lot of the furnishings also left opportunity in its wake. Their redo, plus later adjustments in 2015, added more than a literal lift.

The master bedroom’s screened-in porch was converted to an office, replacing screens with windows that held on to its Old River overlook but expanded the room’s potential use. William could now be there and work, cutting back on the need for back-and-forth trips home to Oxford.

Reconstruction and renovation also included conversion of former loft spaces into actual bedrooms for their two daughters and a playroom addition for more casual hangout space.

The cabin was raised from ten to fifteen feet after the flood. A front porch with rocking chairs spans the length of the huge great room inside. Both issue a warm welcome to family and friends.

“My dear friend, interior designer Barbara Michael in Oxford, started helping us with the cabin back in 2011, when we had to completely gut it after the river flooded,” Margaret Anne says. The great room combines living, dining, kitchen, and wet bar for a breezy conviviality that can accommodate all comfortably and well. The vaulted ceiling keeps the atmosphere airy. In the kitchen, spindles and molding add decorative touches, and authentic antler drawer pulls, made in Hawaii, fit right in. Teak butcher block countertops and a granite-topped island also suit the space.

Barbara and Margaret Anne came up with their own custom stain for big room’s pine walls—a light, natural hue with notes of gray and brown. “We kept trying different things,” Margaret Anne says, mixing them for a just-right result.

The decor is a refined nod to the outdoors, with intriguing personal touches that warm the space. A bench just inside the front doors was hand-crafted by Margaret Anne’s uncle from Byram, fashioned from a tree on his family farm.

Area rugs divvy up the space into different gathering spots, for dining, for lounging, and for socializing. Grays and creams mark the dining room, and studded linen upholstered chairs bring in a subtle masculine touch. The chandelier is among the few things salvaged after the flood. With wood bead strands and wood prisms, it’s a cool focal point that also evokes the outdoors.

Other flood survivors include the salvaged pine hutch that now displays china gifted by William’s uncle and granite from the original kitchen that was repurposed in two of the bathrooms.

A large painting of ducks in flight by artist Bradley Gordon, a Clarksdale native, enjoys the dining room’s spotlight display and provides an artistic ally to the trophy mounts around the rest of the room and throughout the cabin. Most of the deer and all the ducks, bass, and turkey were locally harvested, but the collection also includes representatives—elk, black bear, and pheasant—from Texas, Montana, South Dakota, and Canada.

In the living area, couches and a pair of caramel leather recliners convey easy comfort, laidback charm, and textural interest.

While they were sad to lose their pool table in that flood more than a decade ago, “It turned out to be for the best,” Margaret Anne says. The pool table was rarely used, and its loss made room for a move of the wet bar and the addition of four swivel chairs and a game table at its center. Now, “We use that space all the time,” she says. “That is a favorite for both of us.” Margaret Anne bought the antique game table from Ole Miss’s Kappa Delta house when her sorority redecorated a few years ago.

Above the bar, one of William’s head mount trophies is joined by a suite of trophy cups—gift replicas of a friend’s coon hunting wins from a competition there at Miller Point.

Salvaged wood from a source in Guntown lends rustic charm to the walls in the master bedroom and the master bath, where a corner tub makes an enticing bid for a nice, long soak. In the bedroom, the drapes’ rich red and gold design add a lively dash of color, and the sunflower mirror above the bed is a nod to the Mississippi Delta. “You see so many sunflower fields for dove hunting,” Margaret Anne says.

The small half bathroom downstairs holds a note of history—a framed handwritten letter from an ancestor of William’s, who was at the U.S. Naval Academy when the Civil War broke out. He wrote home to ask his father’s permission to resign because his sympathies were with the Confederacy. His photo hangs beside the vanity, which has its own history as an antique dresser that belonged to Margaret Anne’s grandmother.

A chevron runner pads the trip upstairs, where the girls’ bedrooms and the upstairs game room are the perfect retreats for rest and play. “They needed their own space,” says Margaret Anne. The ping-pong table attests to her husband’s love of the game, and comfortable furniture includes a cushy sofa and fun barrel chairs, made from Jack Daniels barrels, that her dad bought off a truck back in the 1970s. She replaced their red vinyl seats with black velvet. Their girls’ stuffed animal obsession spills over to the cabin, where their collection works into the decor, including a mama black bear and cub clustered around William’s grandmother’s game table, working on a jigsaw puzzle.

The girls’ bedrooms are among their mom’s favorite touches. They’re not “cabiny,” but they are charming, with fun accent colors to match their personalities. Antique clawfoot tubs in their bathrooms are painted in snazzy colors to match—purple for Mary Beech’s room and coral for Kate Carson’s. Above Mary Beech’s bed hangs her dad’s first buck. William’s dad, who had the mount for years, wanted to pass it on, and designer Barbara Michael worked with him on reframing it to fold into the decor. In Kate Carson’s room, wall decor includes a Nicole Lamar heart and a portrait of Champ, William’s first duck dog.

The patio’s circle of Adirondack chairs, with a fire pit in the center, is a favored spot in the evenings. “We all love to sit out there, and the girls love to roast hot dogs and marshmallows,” Margaret Anne says.

They’re taking to the outdoor life. Mary Beech has started duck hunting with her dad and harvested her first buck this past winter. Kate Carson has gone deer hunting too, and the family’s black Lab, Carly Copley, is, of course, all in. And while hunting isn’t Margaret Anne’s passion, she relishes the quiet time to herself when the rest of the family takes to the woods.

For William, it’s current fun that taps into those treasured childhood memories. “To this day, when we drive up on the levee, my blood pressure goes down,” he says. “I truly love it just as much today as I did when I was ten.

“There was nothing to me that was more peaceful—and to this day it’s the same way—than getting up early in the morning and going out in the woods and climbing up in a stand and the sun’s rising and the snow geese start flying over. To me, it’s just magical.”