As Melissa “Missy” Abide Griffith enters a new phase of her life, her art has taken on a softer, more ethereal look. “I’m 51,” she says. “I’m an empty nester. I guess my life is more calm and serene now, and my art reflects that.” Griffith says she can see her life’s journey in her art. “I once painted in very vibrant colors. My painting now reflects where I am emotionally and spiritually. It’s more soothing and calm.”

Griffith grew up in Greenville, and while she has always been creative, she began actively painting at eighteen years of age. “I went to LSU and wanted to major in art, but my father didn’t want me to be a starving artist,” she laughs.  “So I majored in European history. I studied the Enlightenment and the Reformation, and art is really a big part of that. In studying history, I saw how beautiful, light-filled art evolved into darker art, which is something I paid attention to.” During college, Griffith always painted for her own enjoyment. “I’m self-taught. I took a few classes along the way, but mostly I have always thought in terms of what I can do to portray something the way I see it.” 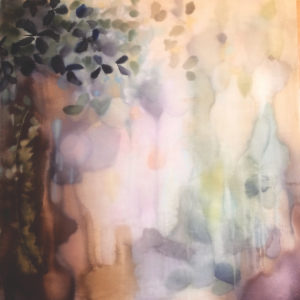 While her art is influenced today by her childhood in Greenville, she didn’t realize what a visually rich place it was until she started painting. “All my work includes a horizon line. There’s something about that big, open Delta sky that opens and yawns. Growing up in the Delta definitely affected my art work. I went back to where it all started and took pictures and started painting.”

After college Griffith was a flight attendant for American Airlines for five years, with her home base in Chicago. She met her husband, David, there, and the couple married and lived in Chicago for twenty-six years. The couple has three sons, all born and raised in Chicago. Oldest son Jack, works in commercial real estate in Chicago; Simon serves in the Navy, and Andrew is a redshirted freshman on the Ole Miss football team. At this time in her life, weekends are reserved for Ole Miss games.

Raising three boys and trying to paint was sometimes a challenge for Griffith. “I used to try to paint in my basement when the boys were young, but when I went down to paint, my boys would want to paint too, so it often turned into an art lesson for them.” Griffith put down her brush for the most part while the boys were growing up. They were active in sports and other pursuits, which kept her busy as well. Once she started painting again seriously, one of her three brothers told her she should put her paintings in the furniture store the brothers owned in Springdale, Arkansas. “They sold immediately,” recalls Griffith, “and that was the springboard I needed to get me going into the serious pursuit of art.”

Two years ago Griffith and her husband moved to Bentonville, Arkansas, where she set up a studio behind the garage. “This is a great place to live and to paint,” she says. “It’s like living in a large city because it has all the amenities.” They live in walking distance of the Crystal Bridges Museum of American Art, which Griffith says is very inspiring. “The grounds around the museum are beautiful. I love walking there.” 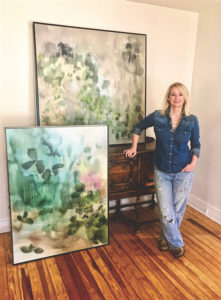 Griffith paints with water-based paint in lots of thin layers. “I used to paint in oils, and I’ll probably get back to that one day, but for right now, I like what I’m doing. Some of my work is drippy with a surreal quality. I want to capture that gauzy look of the South, where the air is thick with humidity.” A resin coating gives the work a shiny look, as if the images she’s painted are captured for eternity. While the images are timeless, the work is fresh and modern. “A camera simply can’t capture all the subtle colors in nature. I like to bring those colors to the forefront. All of my work is inspired by nature. I guess deep down I’m a free-spirited, boho chic nature girl!”

Inspired by the work of French artist Henri Matisse, Griffith says she loves the simple lines of his work. “I went to see an exhibition of Matisse’s work when I first moved to Chicago. His work is really very simplistic, as is mine, but my work is nothing like his. He could make a statement with a squiggle of a line, and that’s what I try to do. As an artist, I’m constantly chasing the light, and that influences my work.” Griffith says she is also inspired by many of the artists she follows on Instagram. “It’s amazing that a large number of them are from Australia. There must be something special going on over there!”

Word about Griffith’s work has spread among designers around the South. She posts work on Instagram, which has given her business a big boost. She recently finished a large consignment for a Nashville penthouse. “I did three pieces for that space.”

Griffith is thankful to be able to have an income from doing something she loves so much. “Sometimes I feel like I should pinch myself. It’s so gratifying for me to know that people like what I do. What was once something I did for my own enjoyment has become a business that I could never have dreamed on my own. It has grown organically, thanks to social media and word of mouth, and right now the sky’s the limit.”