By Rebekkah Arant and Bill DeJournett

Deltans love to eat, and we love to eat well. Our iconic restaurants have established the region as a place known for its good food, and they have paved the way for the burgeoning food revival happening throughout small Delta towns. Following in the footsteps of those legendary establishments, new restaurants are opening up all over the Delta, bolstering their communities and growing the local economy by offering quality food and one-of-a-kind experiences that meet the unique needs of the area. These newcomers are quickly becoming favorites on the restaurant scene, so make sure to add them to your dining plans.  If your plans take you out of town to cheer on your team in Starkville or Oxford, we’ve included a few new picks that will make you feel right at home. 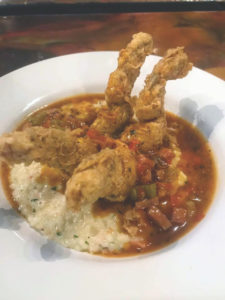 Located in the old Spencer’s Pharmacy building on the square in downtown Ruleville, The Pharm caters to both the agricultural and medical communities as its playful name suggests. Lunch specials like chicken-fried steak and baby back ribs have quickly made it a hot spot, and a dinner menu featuring customer favorite dishes like the ribeye and catfish parmesan keeps diners coming back for more.  Requisite to any visit is the stone whisky shrimp appetizer—perfectly seasoned shrimp served atop a baguette with a Jack Daniels reduction cream sauce. The restaurant offers a small commissary where customers who are in a hurry can grab a quick bite to go, and catering services are available as well.
Owner and chef Dennis Cheshier and his team take pride in the food they serve and in the town in which they serve.  The restaurant has become a communal gathering spot and often brings townspeople together for meetings, birthday parties, and football games. This sense of community truly sets The Pharm apart, and Cheshier says that he truly appreciates the local support. 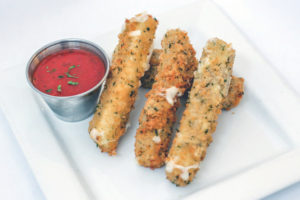 Locals and visitors alike have found a new favorite in Greenwood’s Station 222 Restaurant. Located in the old WGRM radio station building where B.B. King (before he was known as B.B.) often played on air, this modern dining spot places customer satisfaction as its top priority. Diners are sure to be pleased with the restaurant’s focus on quality ingredients and dishes made from scratch daily along with its bar that boasts over eighty wines. Owner and chef Caleb Cox recommends Pasta 222, a spicy cream sauce laden with smoked sausage, chicken, and bacon served over penne pasta. Also, be sure to try the off-the-record bourbon bread pudding with ice cream; it’s not listed on the menu, but Cox says it’s a must-try.
Nightly specials and Saturday brunch help to meet the needs of Greenwood’s dining scene. Families with kids will feel at home every Monday on family night; kids will especially love the campfire s’mores that they can make tableside. By promoting a family friendly atmosphere, Cox hopes to engender loyalty from even the youngest of patrons. The restaurant is a great choice for date nights, and for large dining parties, a private dining space complete with its own bar is available. With a motto of “great service, great food, and good times,” Station 222 delivers a superb Delta dining experience. 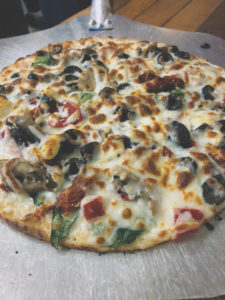 her food so much that she quickly saw the need to open a full-service restaurant in Leland.  The restaurant serves flavorful, homemade, authentic food; Amy makes her sauces from scratch and takes special care in preparing each dish. With a menu full of Italian favorites like beef lasagna, cheese tortellini, and spaghetti and meatballs, Vito’s keeps customers full and happy. Amy’s spinach ravioli alone is worth the drive from anywhere in the Delta, and her white chocolate blueberry bread pudding is the perfectly sweet ending to a meal.
On beautiful Delta days, customers gather to enjoy meals and drinks outside on the patio, which boasts a full bar and fireplace.  Amy makes her customers feel truly welcome with her genuine nature, and her commitment to providing consistent service has created customer loyalty, something Amy greatly appreciates. Customers can also have a taste of Vito’s at home.  Amy sells her casseroles and frozen pizzas at select locations throughout the Delta, and her salad dressing can be found in over fifty stores. 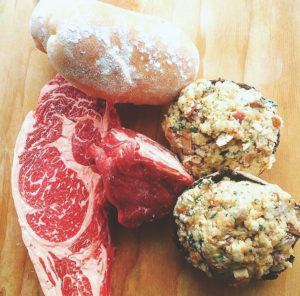 Johnny Cass and Jay Brennan have teamed up to bring Clarksdale a combination restaurant and butcher shop with a focus on integrity and quality ingredients. Cass says that Hooker Grocery and Eatery has a “talented, driven kitchen staff that’s passionate,” and they use this passion to create memorable dining experiences.  Changing daily specials and a diverse menu offer customers delicious dining options. Cass recommends the catfish sandwich—a Southern staple that they have taken to a new level. Customers also sing the praises of the smoked catfish dip.
The butcher shop and deli work with fantastic suppliers and are able to provide prime meat with good marbling, imported cheeses, and fresh seafood to their clientele. As part of this unique concept, customers can select steak or seafood cut to the desired size and have it cooked for a small additional fee.  The team at Hooker Grocery and Eatery bakes bread daily and also offers fresh items to cook at home.  Meeting the culinary needs of the Clarksdale community with inspired dishes and a flair to match the town’s blues heritage, Hooker Grocery and Eatery has become a fast favorite. 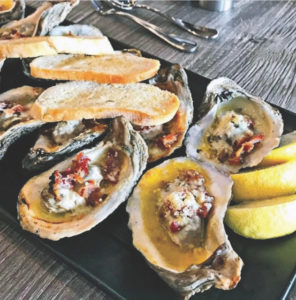 Sea Level Oyster House in the heart of downtown Cleveland is the perfect choice for a night out on the town. Thoughtful planning and attention to details contribute to this chic space’s great atmosphere and palpable energy. Oysters are brought in fresh two to three times a week and are served a variety of delicious ways from the oyster bar.  Southern foods with a Cajun influence like the shrimp and grits served with a fried egg and Cajun pan sauce make for a flavorful menu. Watch for the wood-fired tomahawk steak special and come hungry; this fifty-ounce bone-in ribeye will be the talk of the table.
In addition to the excellent dining, Sea Level Oyster House is also contributing to Cleveland’s night life. With the weekend comes live music starting at eight o’clock each evening. The bar stays open until one o’clock in the morning on the weekends. Because the restaurant is divided into two parts, customers can enjoy a nice dinner in the front and then move to the back area for a more social setting where friends meet to relax and catch up. It’s an ideal combination, and the folks at Sea Level Oyster house make sure their customers have a great time. 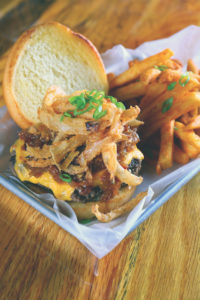 One of Starkville’s newest dining all-stars, King’s Craft Butcher and Cafe features a completely scratch kitchen and a casual fine dining atmosphere. Chef Eric King describes the restaurant as a “hometown butcher shop with food that will blow you away.” King grew up in rural Noxubee County where his grandparents had a small farm with a general store that served as the local hangout. King’s memories of the general store have influenced his vision of the restaurant. Like the general store, King’s Craft aims to be a community gathering spot.
The menu tells the story of the places King has been, from New York to Belfast, Ireland, where he cooked in a three-star Michelin restaurant. One of his favorite menu items, the pork belly steam buns, was inspired by a steam bun stand down the road from where he worked in New York City. These buns, along with daily menu items, are made from scratch and are unique to the restaurant. The restaurant and butcher area offer the highest quality of meat, sourcing their beef from Home Place Pastures in Como. Steaks and burgers are popular dishes; the oft-ordered King burger is topped with bacon jam and made primarily with the trimmings from ribeyes and filets. With crowd-pleasing dishes like these, Eric King and his team are striving to become a household name in Starkville and hope to provide customers with good food for a long time. One of the “new kids on the block,” Southern Table has been serving up an eclectic twist on the traditional Southern “meat and two” since July. Alongside traditional staples such as steaks, catfish, and fresh veggies, Southern Table also serves up unusual appetizers such as cheese curds and poutine. Located on the western side of town, Southern Table has two large meeting rooms, a bar, and an outside patio with a full bar. “I think that we can find a niche—if you don’t want to fight the square traffic, you can come here,” says new executive chef and general manager Jeff Robinson. “If you don’t want to wait in line forever at a brunch somewhere else, we can usually get you in here because we can seat 124 people.”
Southern Table serves lunch and dinner and a weekend brunch that includes mimosas, bloody marys, chicken and waffles, and more traditional lunch fare. Robinson says they are planning on having crawfish boils on their large back patio during warm weather months.
Robinson spoke to the restaurant’s eclectic decor— “This is a neat place, and it looks great. I notice that compared to other places, it has a homey feeling—someplace you can come and chill out.”
By Bill DeJournett 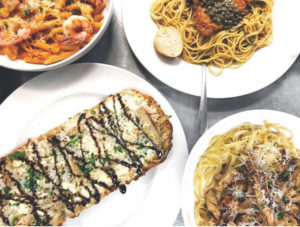 When Volta restaurant owner Brooke Krizbai noticed a for rent sign on the door of a building across from her business, she immediately knew what she would do. “It was five o’ clock in the morning, and I was probably the first person to see the for-rent sign,” Krizbai says. “So I jumped on it and called. ‘Hey, what’s going on over there?’” Krizbai, a native of New Jersey, had a vision to bring Oxford something it was lacking—a New York-style Italian restaurant.
Named after the train track running beneath the Waldorf Hotel in New York City used by president Franklin Delano Roosevelt, Track 61 offers up a menu of traditional Italian fare with an Oxford twist. Alongside hearty lasagna, spaghetti, and manicotti are arancini, cheesy risotto balls deep-fried, and alfredo fries, french fries covered in alfredo sauce and candied bacon with grated pecorino romano cheese and fresh parsley. Another favorite is their penne alla vodka, a dish unique to Oxford. A staple in many Italian dishes, their marinara sauce is made from a recipe straight from an Italian grandmother living in Manhattan.
According to their website, www.tracksixtyone.com, “Our food is NYC inspired, stationed in a street-art setting, reflecting the fun, urban feel of the city.”
By Bill DeJournett