SPRING IS BUT A FOND MEMORY AS WE SETTLE INTO THE SEEMINGLY ENDLESS DAYS OF SUMMER.

While there are bright spots (hey, Fourth of July!), there are many moments when we wonder how our Mississippi forebears survived without air conditioning. A shimmering backyard pool is one solution, and if you don’t have one of your own, you for sure need a friend or family member who does. These three Delta families agree that pools are much more fun when shared. And everyone knows that a refreshing drink just tastes better somehow when sipped lounging under a poolside umbrella. 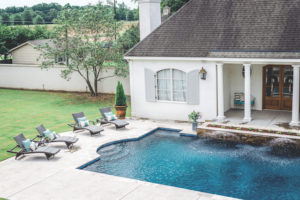 Kate and Mason Dunn of Clarksdale bought his parents’ Louisiana-plantation-style home, situated on family land, two years ago. The house and lawn had been designed by Mason’s late mother in 1996, with the 20’ x 40’ pool and outbuildings added a few years later. Once in possession, the younger Dunns found that the pool was in need of some updating. They called on Mike Ferree of Backyard Solutions in Germantown, Tennessee, to help them refashion the outdoor space to suit their needs.

“Some updating” may have been a bit of an understatement, as it turned out. “We tore the entire back yard out, except for the shell of the pool itself,” recalls Kate. Among other improvements, they added stone to the back wall of the pool, changed the existing color palette and went with a much more open layout for the surrounding patio area. “We had painted the guest house behind the pool when we first moved in,” she adds, “and based the choices of stone, tile, coping and concrete on those colors.”

Crisp white paint, echoing that of the main house, is set off by natural elements in earth and slate tones. In keeping with the old- style plantation feel of the property, a small brick building resembling a pigionniere serves as a storehouse for the pool equipment.

With an eleven-year-old girl, a nine-year-old boy and four dogs, this outdoor haven sees nonstop action most of the year. “From March to October, kids, animals or both are in and out of the pool daily!” laughs Kate. The family loves to entertain as well, and the couple relishes the fact that all ages can mingle. “The open layout means that the kids can run around and play without making the grown-ups feel crowded.” 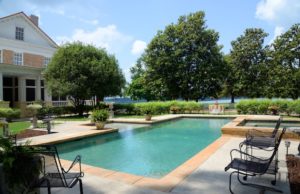 Whitney and Cameron Dinkins, owners of Linden Plantation in Glen Allan, knew that they wanted a seamless transition between the period Greek-Revival architecture of their century-plus-year-old house and the new pool and spa they envisioned. They felt that this luxury feature would enhance their family’s enjoyment, as well as that of their guests at the weddings, invitational workshops and other events that they host at the venue throughout the year. The new outdoor living area commands sweeping views of the plantation and adjoining Lake Washington. The couple, who also operate Esperanza Outdoors (an upland bird and waterfowl hunting service), drew the designs themselves, and work was completed in 2012 with John Catchings of Jackson as installer.

The 27,000-gallon gunite pool is set serenely in a manicured lawn landscaped by Lewis Henry and surrounded by large, old oaks. It utilizes a salt-water chlorinator for water quality. It is rectangular in shape, flanked by a 12’ x 12’ swim-out deck, an elevated Jacuzzi and waterfall of the same dimensions, twin arching fountains and two shallow ends centered by a deeper portion for games like volleyball and badminton.

“Our children, Banks and Linden, love having their friends over, and we host our church’s youth group often,” says Whitney. “Basically, it’s a multi-functional oasis for our family and friends during these hot Delta summers,

but we also enjoy it as a decorative landscape feature and ‘therapeutic amenity’ during the off-season.”

The Dinkinses love the feeling of being deeply rooted here; Cameron’s great-grandfather built the house around the turn of the last century. “Visitors love learning this about the place, while they are here soaking up the timeless beauties of the Delta,” says Whitney. 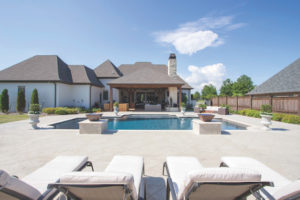 For this Cleveland couple, a more contemporary vibe was the goal. Blake McCain, and Morgan Wheeler added their pool and terrace not long after building the house in 2016. They are enthusiastic entertainers, and have continued to add to and expand the various features of their outdoor living space.

“Blake and I designed the pool we wanted, and Phil McNeer of Professional Lawncare here in town installed it,” says Morgan, an occupational therapist who also owns Kut Works boutique. “I knew I wanted a layout deck, and really wanted to incorporate an element of curved Greek corners, but Blake gets credit for the rest.” The symmetrical, convex edges soften the geometry of the pool. A pleasing balance complements the sleek modernity of the venue, with strategically-placed neo-classical urns at the corners of the pool and layout area, mirror-image planting beds on either side of the rear, and six imposing, columnar Italian cypress trees serving as a vertical focal point near the back wall.

“We started with a simple outdoor kitchen and patio,” she continues, “Last year, we added a fireplace, and a new covered patio area, as well as a hot tub. Most recently, we expanded the cooking area to accommodate more seating, and our Green Egg.” With a host of friends and family close by, the couple claims there is always “something cooking” for a crowd, especially in the summertime.

A particularly spectacular design feature are the gas flames rising from twin copper fire-pits, resembling Greco-Roman altars, above the square fountains situated on the back edge of the pool. “That is our favorite feature,” notes Morgan. “At sunset, they add a beautiful accent, combined with the colored lights in the pool. The sunset views are phenomenal, even here in town. That’s our favorite time of day!”