Precision, Mechanism & Art
The story of one man’s love for friends and fine shotguns

“I’ve collected guns, yes…it’s a difficult thing to explain to others, a gun as a piece of art. Guns are history. I like to look at the mechanism. I like to feel the heft…They just feel like a decent hunk of the past hanging on the wall.” – BARRY HANNAH

AT 81, WAYNE BUSH steps cautiously as he descends the hill towards where the setter is standing firm. Before he is in position, though, the bird flushes wild towards where his friend and hunting partner, Watson Pillow, and I wait upon the crest. Bush mutters something and begins ambling back up the hill. Lily, the setter, has already cast out, found the wind and is gone. Pillow, turning, hollers over his shoulder, “Wayne, don’t trip and shoot me with that gun—Wait! Never mind. If I’m going to be shot I ought to be glad it’s with a Purdey.” 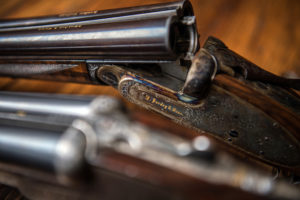 To the uninformed, J. Purdey & Sons has been making fine shotguns for over two hundred years. Today, the Purdey is routinely listed among the most expensive shotguns in the world. Given the quality of the wood and steel and their signature “rose and scroll” method of engraving, a Purdey shotgun is as much a work of art as a fowling piece. Each gun is handmade to the exact fit and specifications of the gun buyer. Suffice it to say I never thought I would see one in person.

It’s not the only bespoke shotgun he owns. Several years ago, Pillow says, no one could find Bush, and he wasn’t answering the phone. Finally, he revealed he had been to Scotland to the gunmakers at David McKay Brown.

Pillow nods at me, “You ought to see the whole collection.”

Inside there’s a blast of cold air, an oil painting of men and women picking cotton, and forward, to the right, floor-to-ceiling glass windows overlooking a rain-spattered Tallahatchie River.

Amid it all, more gentility than anyone has a right to expect. Taking it in, our eyes drift toward the bank-vault door on the wall opposite the entrance.

At first glance, his farm headquarters look as inconspicuous as any office on any farm from Peabody Lobby to Catfish Row, River Levee to Loess Bluffs. But it holds a singular treasure, the type of thing old timers talk about at places like the porch at Thornton Hunting Camp, or the duck blinds of Tallahatchie County. Tales of the Delta’s past opulence. Collections of fine art and libraries full of first editions. Artifacts of high culture it’s hard to believe ever existed.

Inside the fireproof, steel-reinforced concrete, climate-controlled gunroom is a case with three rows of guns, divided left and 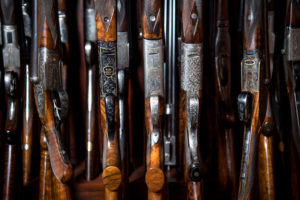 right, covered by two sliding-glass doors. The wood is deep red and lovely. The case was a gift from another of Bush’s friends and hunting companions, Bill Litton. “Before he built the office and gun room, one time he wanted to show me a gun. So, we went in his house, and he started pulling guns out from safes, behind doors, under couches. Everywhere. When he built the gunroom, I gave him a jewelry case from the old Stein’s Jewelry Store in Greenwood. It used to display fine crystal and silver. Now it displays fine shotguns.”

The collection itself consists of one hundred twenty-five shotguns, approximately eighty-five of which remain on display. It includes fine firing pieces from all over the world. Among the highlights of his international shotgun collection is an Aya from Spain, Berettas from Italy, three Krieghoffs from Germany, the McKay Brown from Scotland and, of course, the J. Purdey & Sons from England. He also owns a James Woodward, the company recognized for producing the best shotgun ever made. Towards the back, he pulls out a smaller, lighter gun, tastefully engraved, and pauses. “Oh yeah,” he recalls, “Piotti. Nice little Italian gun handmade by a Mr. Piotti. He just died, and these guns doubled in value.”

To top off this tour of European finery, he hands me a Boss.

The pinnacle of his collection, though, is eight pieces that point to his initial love for fine American shotguns.

The first time Bush hunted with us, he had a “new” L.C. Smith side-by-side. His usual gun inadvertently fired a few weeks before when he closed the breech. He had hunted with it nearly fifty years. So, he found another L.C. Smith from the same year that was in usable condition.

For Bush, the L.C. Smith represents the finest American gunmaking has to offer. He still remembers the first one he ever saw. Every Monday when Bush was a young teenager his father sent him around to the various constables to see if any of their farm laborers had been arrested and find out how much it would cost to bail them out. They were friends with Constable Webber in Itta Bena, and one day when young Bush was there, he was admiring a host of guns on the wall. “He had a bunch of them hanging on the wall that’d been confiscated. Mr. Webber said, ‘You want one of them guns?’ I said, ‘Yes sir, I sure would like to have one.’ He said, ‘Pick out the one you want.’ And I had always heard of L.C. Smith, you know, that was supposed to be a really good gun. And I saw one, so I got it. He wanted twenty-five dollars for it. I said, ‘Mr. Webber, I don’t have twenty-five dollars.’ ‘That’ll be okay,’ he said, ‘Just take it. Pay me when you can.’ So that’s how I got started with them.” 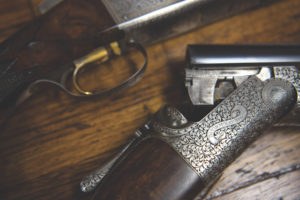 He primarily collects side-by-side double barrels and says they are all from the early 1900s. Nothing here is made after 1940. I asked if he still has the gun he bought from Constable Webber all those years ago, and he took me into the gunroom and pulled it out. It had a simpler engraving than the scrollwork found on the others: a hunting scene with a man in a hat shooting over a standing dog.

All told he has eight L.C. Smith shotguns. Each is uniquely beautiful and well maintained. They sit among his collection of American models that includes three Parkers, five Lefevers, four Ithacas, an A.J. Fox and a J. Stevens with double hammers. All of these rest among finely engraved Brownings, Winchester 21s, and other staples of American wingshooting. “Once I got a good collection going, I thought I would also like to own one of every fine shotgun made in America,” he says as he hands me an early model Baker.

Walking away it’s difficult to sort out all of this. The collection is extraordinary. Bush is remarkably modest in general, but especially about this, his passion. He shies away from most questions addressing why he loves side-by-side shotguns so much, offering simply, “Oh, I just like them.”

But later, he opens up a little, “What’s fascinating to me is the precision. The mechanism. I’ve always wondered how in the world they could make something like that and make it work so well. And hold up for so long. And they made them all by hand! Precision on that level, that much work, that much trial and error—I think that’s art.”

“What friends I have, what days I treasure most, what places I think about and smile…they are because shotguns are. Without them, I would have been empty. They have made my life full.” – GENE HILL

Leaving, we meet Bush’s wife, Celeste, returning from a Bridge game. I ask her what she thinks of the gun collection. She considers it a moment, and with eyes beaming, perhaps with a love that passeth all understanding, says, “Oh, it just makes me happy he has his guns. Because they bring him so much joy.”

Later, I ask Pillow what he thinks is behind Bush’s love for shotguns. What makes someone spend the time and money and resources it takes to put something like this together, “I don’t know,” he says. “Why do women love diamonds? Why do men love women? Why do you love a setter bird dog? Cause they’re pretty, I guess. And some are beautiful.”

Driving back through Money up Highway 8 and past Tippo, something Bush said settles more heavily in my mind with each 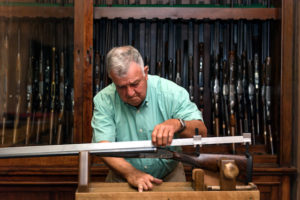 passing mile. “I hunt a lot with Bill and Watson. I have for a long time. But they are a lot younger than I am. You know, I’ve hunted with a lot of folks for a long time.” His voice trailed off. “Most of them are dead now.”

For all its depopulation and attendant decay, there are still a few remaining flecks of refinement in the Delta. It is not for hubris or even personal gratification that this collection exists. Each gun is, first and foremost, a mechanical object possessing a certain utility— a purpose that must be fulfilled. A gun’s artistry begins with its functionality. All told, and any wingshooter will verify this, it is the tool that provides friends the context to spend time together outdoors.

Litton adds, “I got to know Wayne first through doing business with him, and I learned he’s a man of impeccable integrity. Later, he introduced me to bird hunting. Our friendship really grew by hunting together. I’ve come to know him as a true friend. Above all else, he is a gentleman with a character that’s rare as some of the guns he owns.”

Bush has spent a lifetime hunting with his closest pals. This collection will remain, solid as a standing setter, as a testament to his best days spent afield with friends.