Turning wood and building stories one call at a time. 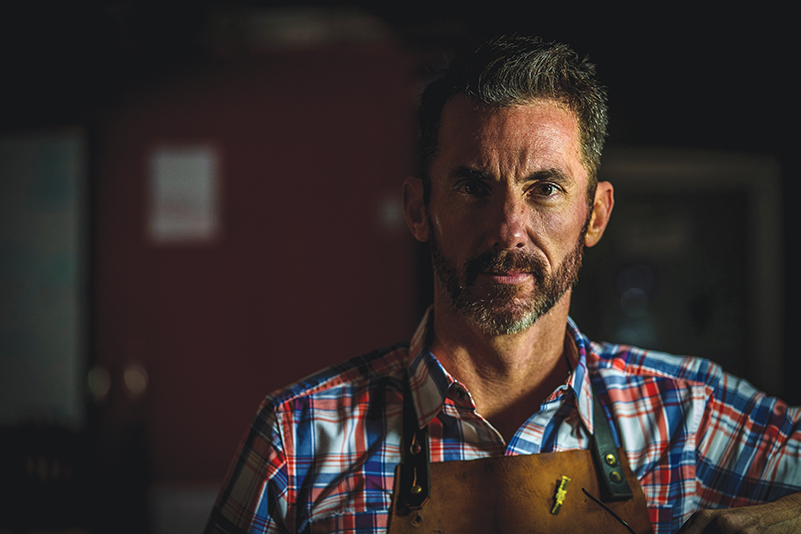 Josh Raggio reaches back for that earliest memory, where a skinny, wide-eyed ten-year-old discovers duck hunting with his dad at Delta National Forest. With no child-sized waders, the smallest adult pair had to do, rolled down and held up by his father’s braided leather belt at the waist. “He’d just cinch it up as tight as he could,” Raggio says, flashing a grin.

And he still does, to the point where the singular focus of his one-man operation, Raggio Custom Calls, is that moment in the wild, that connection between hunter and hunted.

Raggio’s best tool in that pursuit is a duck call fashioned by his own hands, of a quality that will endure for generations, tailored for just the way he likes it to sound.

He’s crafted about 1,500 calls, each one unique, since his 2013 start, and holds a stack of orders that will take him clear through next year. Inquiries come in daily.

Raggio, 39, grew up in Raymond and earned a business degree from Belhaven University. He played baseball through college (“Probably the only reason I went to college,” he quips), then started his own landscaping and small construction business after graduation. That was in the midst of the housing boom. Two years later, with the 2007-08 financial crisis, “Everything just ceased.”

More than a decade at Puckett Machinery, in product support and then heavy machinery sales, followed. Valuable insights he gained on the job—“It was all relationships,” he says—serve him well in his own businesses.

A personal goal served as its start, back in 2013. “I wanted to make myself a call to go hunt with. Never planned on selling a duck call. Never planned on making them,” aside from a few for his father and close friends. Interacting with wildlife, using an instrument made with his own hands—that’d be the ultimate accomplishment. 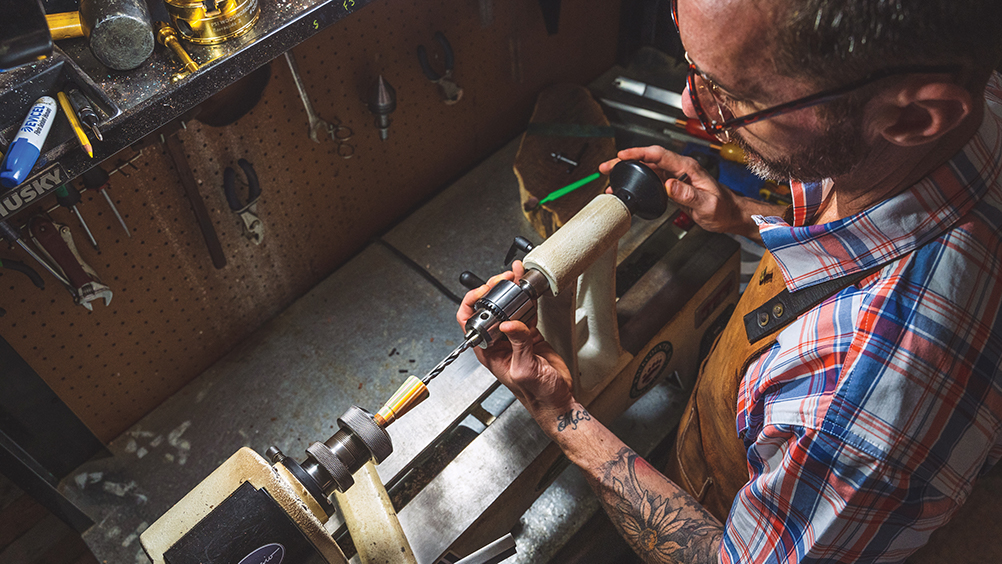 “I taught myself pretty much everything.” His first lathe? He didn’t even know how to turn it on.

“I had zero woodworking background.” He did have a background in duck calling, though, thanks to his father, Ronnie, a competition duck caller. Josh learned how to blow a call early on (he’s also a competition caller), and inherited, too, a passion for its role. “My dad loves that interaction, just like I do,” with wildlife, in the wild. His mother, Antoinette, gets credit for his creative streak.

Raggio lived just down the road at the time. He didn’t have a workshop, but he did have a carport, “So, it was super hot in summer and super cold in the winter. I was either swatting mosquitoes or had a heater blasting on me.”

He would work all day at his real job, then come home to master wood-turning. Research and development on his tone board was a particular challenge. “It’d be midnight, and I’d be in my carport, filing and sanding on this piece of wood. File and sand, blow it. File and sand, blow it. But, I’d have to go get in my truck to blow it, because my newborn baby was inside. My wife was also inside, asleep. So, you can imagine me out in the garage, filing and sanding and sweating. OK, go get in the truck, close the door, blow it, well, dadgummit, I’ve got to do a little bit more. Back and forth, back and forth.

“It’s funny now. It was fun, then. I had such a passion to get it right—to produce this quality of sound and tone that my ear wanted to hear—that I was just hell-bent on getting it figured out.”

He developed his own tone board from scratch, and based off of it had a jig made. He made his first duck call January 2014. He immediately wanted to make another. Then he started selling a few. 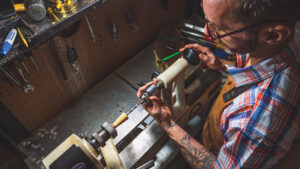 That first year, a guy using one of Raggio’s calls placed in the top five in the World Live Duck Calling Contest in Easton, Maryland. Then, Raggio Custom Calls was a runner-up in Garden & Gun magazine’s Made in the South Awards.

“All of a sudden, I’m in business.” It hasn’t stopped since. He’s been at it full-time for two years now.

Another score: his collaboration with leading outfitter Filson. Since 2018, Raggio has made duck calls for Filson, in cocobolo wood with a call bag made of Tin Cloth (supplied by Filson, and sewn by his mother).

“Our brands fit really well together—they stand for quality, handmade, just heirloom-type products,” Raggio says. Filson, along with Garden & Gun’s Fieldshop and Upperduck, are his only wholesale customers; everything else is direct through his shop/studio, within a stone’s throw of the home he shares with wife Ann, daughter McRee, 8, and son Jett, 3.

Heirloom is a key word in Raggio’s vocabulary, from the way he talks about the nuances of duck call craftsmanship to the way he proudly shows off his father’s hunting journals. “I shoot with a gun that my granddaddy would have hunted with,” he says of his .410 over/under shotgun, a special collaboration piece made with fellow craftsmen. “I hunt with handmade decoys.” He pulls out a mallard decoy made by a friend in Illinois.

“It’s just all what you value and appreciate,” he says. The latest and newest? He prefers the durable and the proven.

“That’s the idea with my duck calls—creating heirlooms.”

An art to it

Raggio, a member of the prestigious Craftsmen’s Guild of Mississippi for a time, views his calls as functional art. Each one is made for hunting, and also embodies a unique, handcrafted appeal. Duck calls are musical instruments; a reed vibrates when air is presented, producing the distinctive sounds of a duck in the wild.

“He clearly has a gift on the artistry side, and that definitely comes out in his work,” says Stewart Robinson of Cleveland. He and Cameron Dinkins operate Esperanza Outdoors at Linden Plantation, a premier duck hunting experience south of Greenville. “We’re hunters before we’re collectors, and Josh is too—he just also happens to be a really cool artist.” 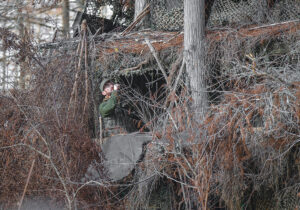 Robinson owns a couple of Raggio calls, and breaks them out for special hunts. He’s also watched dozens of the custom calls come through their doors in recent years, as part of the package with corporate sponsors.

“With Josh, I feel like there’s always a story behind every call I’ve seen him make.” Those prompt great conversations in the blind, and become part of the heritage that’s passed down.

A $20 duck call from a big box store is made by machine, injection molded or a computer-programmed process. “I turn everything by hand,” Raggio says.

While other facilities might crank out 100,000 calls a year. Raggio produces 400 to 500 in his one-man shop. His start at $400. He’s sold some for $5,000, he says, the price tag determined by the rarity of the wood used, band options, details such as a captive ring, and more. The custom part involves other preferences, too. Kind of volume? Back pressure? Woods or fields?

Cocobolo is a favorite, because it’s very dense (good for sound quality and resonance, much like a clarinet), and very traditional. African blackwood is another frequent choice. The wood blanks, stacked on shelves and scattered across his desktop, are a rich variety of hues and patterns. Raggio reaches for a blank of horse chestnut burl, captivated by its whirls as he imagines the call within.

Social media serves as his portfolio. An Instagram photo might spur an order of the same. But, half the time, customers opt for “maker’s choice,” he says, with the only instruction, “Just make me something cool.” With a certain budget in mind, Raggio determines which wood to use, and lets artistic freedom take the reins.

“If I turned the same wood every day, all day, I could not do this.” He has no clue what that horse chestnut burl will look like when he shapes it, what will come off and what will surface. “I’ve been staring at this one for a while,” he grins. Next “maker’s choice” order, that’s what he’ll grab,

“That really gets my wheels going. I can’t wait to see what that’s gonna look like.” 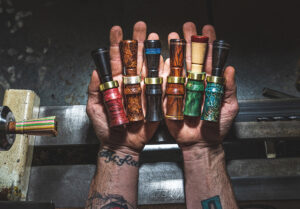 A welcome sign greets visitors at Raggio Custom Calls studio, at the end of his drive. The door opens to a gallery of waterfowl memorabilia, including his duck call collection and first prize competition plaques. The first duck call Raggio made, from the extremely tough bodock wood, nestles in a cabinet alongside calls from other Mississippi makers.

One shelf holds the autographed handles of baseball bats that once felt the grip of professional players—the bats’ barrels turned into their custom duck calls. “It’s been really amazing where a duck call has taken me,” he says, from the World Series to Dallas Cowboys owner Jerry Jones’ ranch. Calls have gone to major league baseball players, country singers and more.

Several guitars hang around Raggio’s shop, within easy reach when he takes a break from turning. Dozens of visitors’ signatures scrawl across a pallet wood wall, with a dangling Sharpie handy for more. Inspiration struck on Raggio’s tour of a Gibson Guitar Factory; guitars lined the hallway, with musicians’ signatures on the wall. “How cool would it be, when you got your instrument made here—your duck call—to leave your mark on the wall?”

One of the best things about what he does, Raggio says, is the relationships he’s forged and the friends he’s made. Those signatures are part of the record.

His mobile duck call shop is parked out front—a trailer that holds another lathe, blanks and tools. Hooked up to his truck, it travels to private camps that hire him and trade shows where he’s a featured draw. That way, Raggio can make duck calls on the spot, and just like in Raymond, customers can watch. Generator-powered with air-conditioning and heat, lined in cedar, it’s a comfy, masculine cocoon on the go. 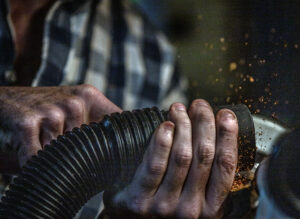 “Work With Your Hands,” a wool felt sign on Raggio’s shop wall says—a command, a reminder, a philosophy. Artist Jane Mullins, Raggio’s fourth grade gifted teacher and now his friend, made that for him. “She’s awesome,” he says, pointing to the picture of a duck call with stained glass pieces she helped with. “That was one of the coolest calls I’ve ever made.”

Mullins cut the little stained glass pieces, but he had to inlay them, she reminds him when he pops in for a visit that afternoon. “You have to do your own work on your own project,” she teases. “I made him do that when he was a fourth- grader, too.” Raggio had creativity and knowledge even then. “He’s a problem-solver.”

And each of his calls, she says, “is its own sculpture.”