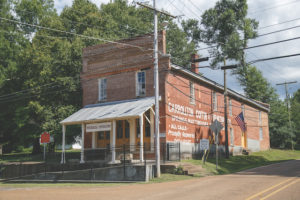 A day trip to Carrollton means an eight-mile road trip outside the flatland, a few degrees increase in elevation, and what seems like a hundred years back in time. This quaint town in the shadows of the Delta offers insight into not only local history, but state and national history through its preserved architecture of homes, churches, downtown buildings, and historical figures.

Descending the hill into downtown Carrollton, you are immediately transported into a living replica of 19th- century design hosting current businesses and housing contemporary families. Historic structures throughout Carrollton are restored—not renovated—and this is what allows the entire town to be one of the largest districts on the National Register of Historic Places in the United States. In fact, ninety structures contribute to Carrollton’s historic designation. 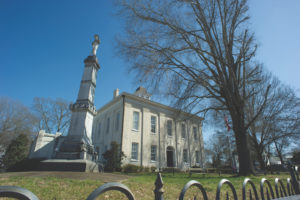 Carrollton was established as the county seat of Carroll County in 1834. At the time, it was the largest county in the state and required two county seats. The population of Carrollton peaked right after the Civil War and the establishment of the railroad. This boom triggered housing and building development in the architectural aesthetic of the early 1900s. However, with the development of state infrastructure (roads and highways), Carrollton was no longer the center of the county and thus did not experience a continued increase in population growth or development.

The population declined throughout the 20th Century and left the existing development from the early 1900s frozen in time. The community utilized what architecture it had already established instead of building new, as this was more economically feasible for a small town. Today’s population hovers around 200 and includes visionaries for both the success and preservation of this historical gem.

A day trip to Carrollton starts in the center of town at the Carroll County Courthouse. This symmetrical, two-story, hipped-roof Greek Revival building constructed of stuccoed brick was designed by James Clark Harris (Greenwood Leflore’s son-in-law). The first floor’s crossed central hall doors are never closed, which allows summer breezes to travel through the corridor. This is 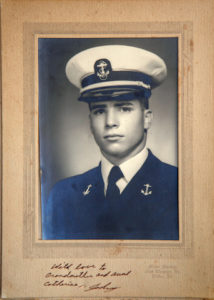 actually the third courthouse built in Carrollton, the second on this exact site. Upon the burning of the second courthouse, citizens were able to save most of the records, giving the county the second oldest surviving records in Mississippi.

The commercial buildings across Lexington Street from the courthouse were built in the early 1900s and represent the three-bay, cast iron frame style, which replaced the wooden structures. Just south of the courthouse is the Merrill Building Museum, the lone survivor of a strip of buildings referred to as Tobin Row. This two-story, common bond, gabled roof structure has been utilized as a store, residence, coffin manufacturer, and temporary courthouse. The store now serves as a museum of Carroll County memorabilia and showcases artifacts that include Choctaw items, old collectibles, articles, and features the John Sidney McCain collection—a compilation of personal and military memorabilia belonging to the grandfather and great- grandfather of Senator John S. McCain.

On the north side of the courthouse is United State Senator J.Z. George’s law office. George served in the Senate from 1881–1897 where he helped frame the future Sherman Anti-Trust Act, introduced a bill to establish agricultural college experiment stations, and eventually the U.S. Department of Agriculture. He is also recognized as one of the principal authors of the Mississippi Constitution of 1890. George’s home, Cotesworth, was purchased as a stagecoach inn and transformed into a premier example of Greek Revival architecture. You may recognize it as the Foote Plantation in the 2010 blockbuster movie, The Help. The home remained in the George family for generations until his great-granddaughter donated it to establish the Cotesworth Culture and Heritage Center (www.cotesworthcenter.org).

Of the five historic churches located in Carrollton, four were established in the 1830s, and continue to have active congregations today. All can be found mere yards from the courthouse, representing different architectural styles. Just as crucial to any 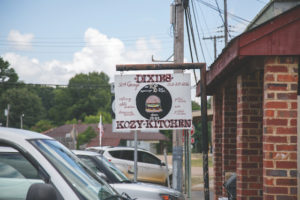 community as its churches, the Carroll County jail lies in the shadows of the courthouse, as well. It is a two-story, brick cruciform structure with cells occupying the second story.

Once you’ve spent the morning exploring downtown Carrollton’s historic commercial and religious structures, drive across the creek into North Carrollton for lunch at Dixie’s Kozy Kitchen. This tiny building boasts some of the best burgers and plate lunches in the state. The Carroll County burger and hand-cut fries are worth every calorie.

After lunch, it’s time to experience the homes that Carrollton has to offer, many of which are from the antebellum period. 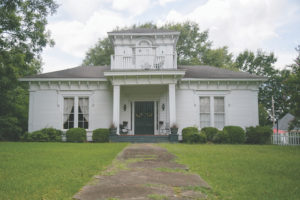 The design of Stanhope can be attributed to Carrollton’s prominent architect and master builder, James Clark Harris. It’s considered to be one of the most impressive homes in Carrollton with its Italianate detail consisting of hooded windows and roof brackets, a hipped roof tower, and balcony over the center bay. The upstairs was used as Dr. Washington Stansbury’s medical office. 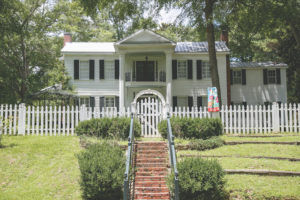 The Oaks is the ancestrial home of the Pitner family. Mr. Pitner was a vice president of the Greenville, Columbus and Birmingham Railroad and editor of The Conservative, Carrollton’s newspaper and also the oldest, continuously printed publication in the state. Extensive renovation has taken place on the dwelling with a five-bay façade, distinguished by a distyle portico with octagonal columns. A single-story addition was added to the back of the house during renovation. 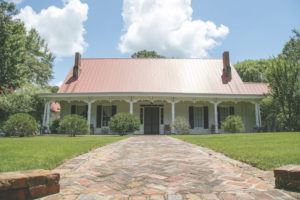 Home to the Orman Gee family, who operated the general merchandise store. The Helm House is one of Carrollton’s most beautiful and ornate homes with many of the original outbuildings preserved. These include the smokehouse, barn, and the three-hole outhouse. It was remodeled in 1875—twenty-five years after its initial construction—after being bought by Colonel William B. Helm. The home is elaborately detailed with eclectic millwork, dropped acorns, and columns combined with an earlier single-story Greek Revival structure.

On your way back to Highway 82, be sure to check out the Carrollton Community House. This log cabin structure was built as a WPA (Works Progress Administration) project in 1935. Just past the Community House, you’ll find Coach’s Antiques. Constructed by a local doctor who didn’t want the roof to leak, the building itself is a piece of architectural history. Once you step inside, you’ll experience artifacts and collectibles that span over a century—and if Coach is available, he’ll identify and provide stories and tales for each one of them. Make sure you step to the southeast of the building to see one of Carrollton’s seven cemeteries, complete with Union and Confederate gravesites. Coach even has a story on the design of the tombstones.

If you leave your copy of Delta Magazine at home, Carrollton has a great walking tour app available for your smartphone. With an interactive map, the app also tells the town’s history written by Carrollton resident Tommy Goodman and narrated by Walt Grayson. If you want a more structured day trip, complete with tours, craft and food vendors, education exhibits, and live music, the Carrollton Pilgrimage and Heritage Day is October 3–5, 2018. Tickets are available and include tours of many of Carrollton’s historic sites, downtown buildings and antebellum homes. For more information, visit carrolltonms.com/carrolltonpilgrimage.

2 thoughts on “Restored, not Renovated”