Setters & Labs, Yanks & Rebs
Not All is Lost in Translation

THE DECISION TO MOVE HOME, farm and start a quail hunting preserve was an easy one to make back in 2007.
Executing it proved more difficult.
Among the most significant challenges was bridging the generational gap that nearly killed upland hunting in the South.
I grew up regaled with stories of my grandfather and others his age, their bird dogs and the bevies of quail they found and stood over. Reading through my father’s collection of Nash Buckingham’s stories made it all seem real and within grasp.
Even though I came along in a wing shooting era that saw the large social dove hunts of early September practically vanish, and duck hunting become less a vital element of local culture and more a game for absentee landowners, it still didn’t occur to me that people didn’t hunt upland birds anymore. But they didn’t. At all.
In the Delta, upland hunting means quail. In other parts of the country it means everything from Chukar and Pheasant to 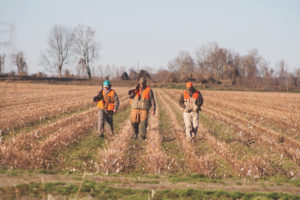 Ruffed Grouse and Snipe. Woodcock are a favorite. So long as there is a dog out there finding and standing over birds, any of these will do for a fine day afield.
The generational gap lended itself to a certain apathy, ditto the lack of native, wild Bobwhites. But after a couple of years things started picking up saved, in part, by the owners of duck camps who don’t allow afternoon shooting most of the season, and the good people at Tallahatchie Hunts who bring in a trigger-happy, international clientele to duck hunt.
We now entertain avid upland hunters from all over the country, local men getting back in to the sport and others green to it, but genuinely excited. With such a diverse group of hunters it’s no wonder misunderstandings sometimes occur. The best thing about bird hunters is also the best thing about bird dogs: they tend to be forgiving.
In our fifth year operating I offended a customer. It wasn’t intentional. I chalked it up to cultural differences, just as Havilah Babcock observed that Northerners call a dog indicating birds “pointing” while Southerners call it “standing.”
Javier and Karen leave upstate New York every year after Christmas to bird hunt and hunt-test their dog, Max, around the country. They booked a self-guided hunt on our preserve, but when they showed up Max was a lab. I assumed they wanted me to provide a steady bird dog so they could work him on retrieving.
And so I asked, “Would you like for me to run a bird dog with you.”
Incredulity fell like an old Parker’s double hammer. “We have a bird dog. What do you think he is?” Karen pointed at the sleek, black mass of beauty sitting patiently beside the chair in our living room. Backing off a little I relayed that in the Delta the term “bird dog” is specific to pointing breeds, while labs are called retrievers. They scoffed and said my dog flesh would not be needed.
But they did want me to shoot. 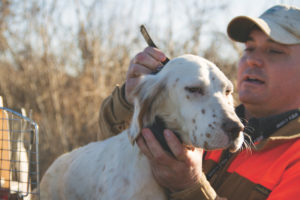 This is a professional hazard. Not that I’m a great shot. At best, I’m streaky, but if I take a gun on a hunt and end up killing a majority of a customer’s limit, then an uncomfortable conversation may take place regarding payment at hunt’s end. On these grounds I made my protest.
They countered that Max needed to work over as many birds and make as many retrieves as possible. Since Karen handles the dog, they needed me to shoot. Figuring my mouth had done enough damage I retrieved my Sweet Sixteen.
At the field they opened their car’s hatchback and Max unloaded on command. Then, on command, immediately heeled. Besides the dog’s crate, the back of the vehicle was full of trophies and ribbons, primarily blue. I was just processing the sheer volume of accolades assembled when I noticed Javier putting together a .410. This reduced my confidence to random mutterings about my diminishing eyesight. He looked at me with curious sympathy, gave a nod to his wife, and she released the dog…
A little context is important. Earlier that year a customer brought a lab and wanted me to hunt a “bird dog” with him so he could work on retrieving. My setter, Sky, was in her prime and as good a bird- finding dog as I’ve had. With speed in spades, she possessed style and grace. She covered ground quickly and thoroughly. When she pointed there was always a bird. Once on a bird she kept it pinned down as long as it took for the gunners to get in position. Sweet around the house, she was endowed with a single-minded prey drive afield. Plus, she was steady to wing and shot and considered retrieving beneath her dignity, her sole eccentricity.
The lab’s name was Clark.
He was fun-loving and gorgeous. I knew from the kennel of origin that as a puppy he had cost at least a few thousand dollars. The customer said Clark had “some training.”
When we released them Sky cast out wide, found the wind and turned into it, running full speed, nose high. As she neared 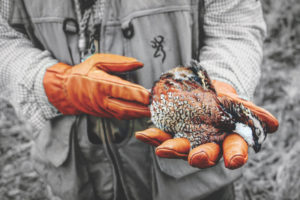 cover she turned half her body against the other half and slammed to a halt. The tail, high in the breeze told the story. I tried to hurry the hunters into position. Clark ran amok. The owner screamed, yelled and cursed. In Clark’s defense, he had never seen a bird dog work. While I admired Sky standing rigid in the early afternoon light, Clark couldn’t figure out why she wasn’t running anymore. Overcome with curiosity, he charged right at her, leapt over her head and busted the covey.
Sky bit him in the face.
That was two weeks before Javier and Karen showed up. Max was no Clark. He handled as near to perfect as any dog I’ve hunted behind. Working close and thorough, anytime he smelled birds his body would go aquiver with an excitement opposite a setter’s statuesque stance. Karen would whistle a command and he would sit. Once the gunners were in position, another command and he would flush the birds.
The first time, I missed twice. Javier doubled. 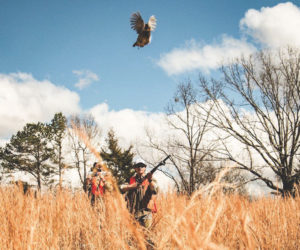 It was like that for while: Flawless dog work, good strong flush, one man dropping his share of birds while the other made eyesight excuses. After missing a few, though, I found my shot and we connected several times on different birds of the same covey. As the afternoon evolved it was as though we had hunted together from youth. Several times one of us checked off birds turning towards the other. Neither of us took shots that were, by right, the other’s birds to shoot.
Karen handled Max like a pro. He hunted slower than my hard-running setters, but he never missed a bird. Once we shot, he retrieved to heel and handed off game only when commanded. He would then wait for the mark and without fail make the blind retrieve. This went beyond normal dog work. He was no “meat dog” meant only to fill game bags. Nor was he a field trial dog judged on finds and form alone. Max was a perfect amalgam of the two. A new standard. Art afield.
I returned home after sunset, and my wife met me at the door, “Are you okay? I’ve been worried sick.”
“Yes,” I said, “I’m fine. What do you mean?” She cocked her head aside, “You’ve been gone over seven hours?”
I gazed out the window through the dimming light of day as Sky looked up the ridge behind the house towards coverts of birds and all the ground I now know she would never cover—all the birds she would never find, and dreamed what a team the two of them would have made.
“I didn’t notice. It took a long time hunting the whole place with only one bird dog.”