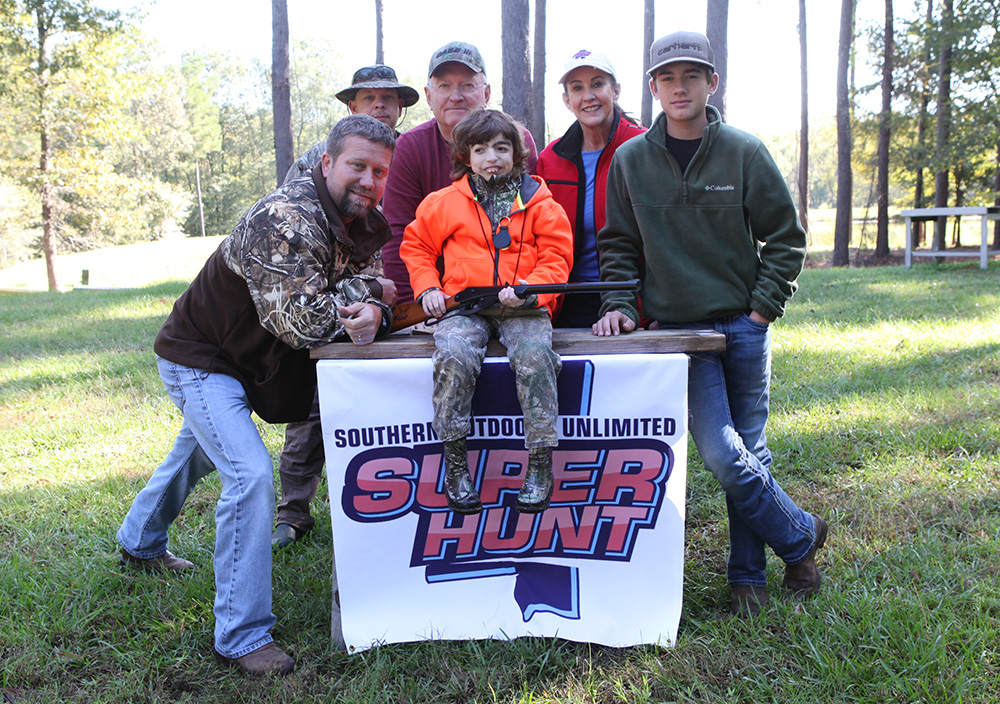 No deer were going to make an appearance that day, Alan Mumbower just knew it. Not with the amount of noise emanating from their deer blind. The wildlife biologist had recently started as a volunteer guide on the Super Hunt, an annual event that introduces youth with disabilities to the great outdoors.

Mumbower is now board president of Southern Outdoors Unlimited, the nonprofit that coordinates Super Hunt activities. But, this years-ago moment is one that sticks with him. That day, their young hunter, who is on the autism spectrum with learning disabilities and other challenges, was getting his first taste of hunting (and an earful from family members along for the outing).

“There were six or seven of us in the deer blind,” Mumbower recalls with a chuckle. “The grandfather was yelling because he was hard of hearing, and the kid could barely hear because of a disability he had, and the mom was yelling at the grandfather to be quiet.” Mumbower and a fellow guide in the blind could only shrug and reckon it’d be a good activity anyway—they’d all have fun, hanging out together in nature.

“We say it every year, that this is just a God-breathed event,” Mumbower says. “God has a funny sense of humor—He takes the impossible and makes it possible.” Sure enough, despite all that ruckus, out walked a deer into full view.

The grandpa was still yelling, the boy was trying to shush him, and the guides were repositioning their young hunter to take full advantage of this miraculous stroke of luck. “By the end of it, the kid had shot and harvested a decent 12-point buck. It would never happen on a regular day when somebody out there is just hunting by themselves. But it’s one of those things that’ll stick with you forever.”

“That’s why we do this,” Mumbower says. “We’re not doing this for the fame or fortune, or anything else. We’re doing this for the kids and families that may never get this experience again, so they can get a sense of why we love the outdoors, and we love being a part of God’s creation.”

The Super Hunt, aimed at anyone ages 6 to 17 with a disability, usually falls on or near Halloween weekend—the weekend preceding Youth Gun Season, as granted by the Mississippi Commission on Wildlife, Fisheries, and Parks to Southern Outdoors Unlimited for that purpose, Mumbower says. That allows youth with disabilities to be the first people in the woods with guns each deer season. 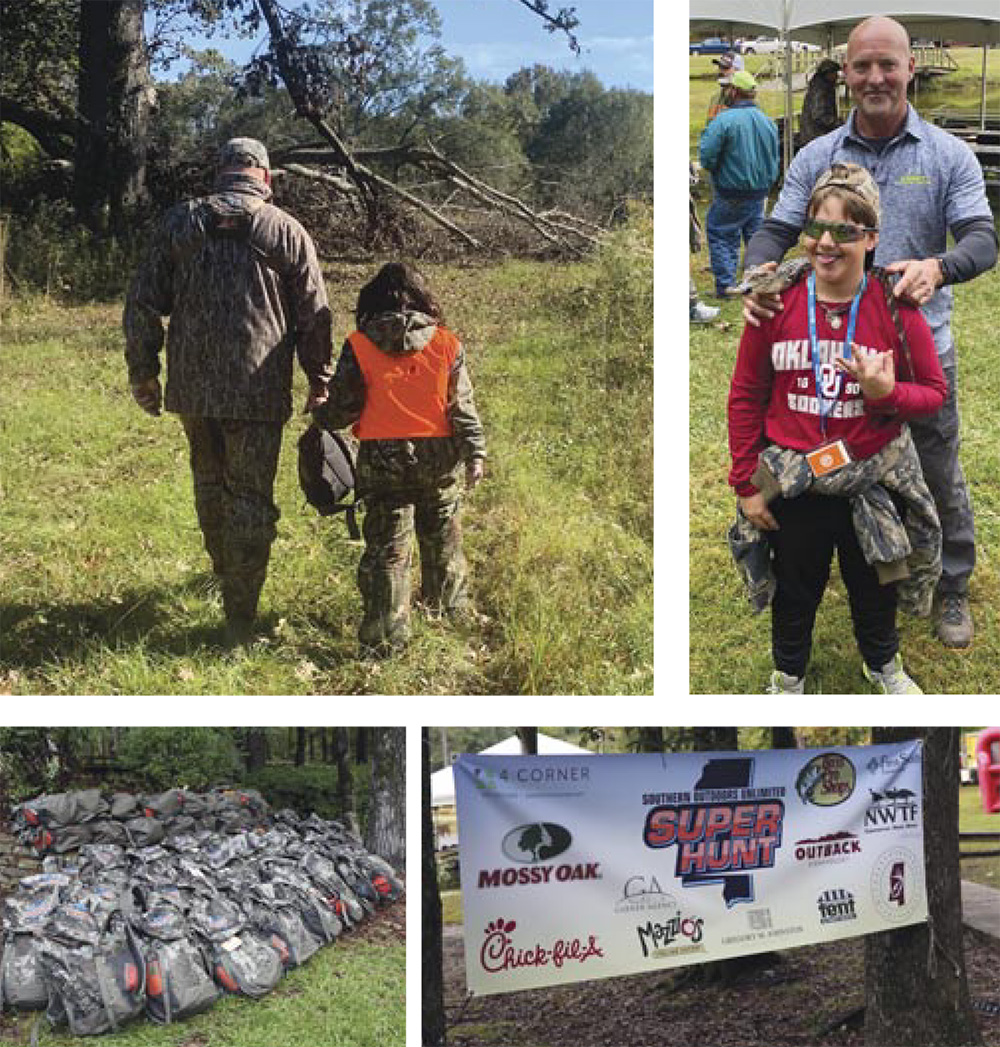 About forty to fifty private landowners and eighty to over one hundred kids with disabilities take part in the Super Hunt each fall. The event is completely volunteer-based through Southern Outdoors Unlimited, with all sponsor and donor dollars supporting the children’s outdoor fun and hunting pursuits. In addition to willing landowners, they need volunteers, guides, and financial partners every year to help make it a successful event.

The event’s origin traces back to the National Wild Turkey Federation Wheelin’ Sportsmen program. Mississippi’s Wheelin’ Sportsmen event started small in 2006, coordinated by a group from NWTF and Bass Pro Shops as a way to get youth with disabilities into the outdoors and deer hunting.

The Mississippi Wildlife, Fisheries, and Parks Foundation took over the event in 2012, renaming it the Super Hunt, and in 2018, the nonprofit Southern Outdoors Unlimited formed as a way to continue the Super Hunt.

Since 2018, more events have joined the calendar, including fall turkey hunting for youths with disabilities and the low-key, introductory Outdoor Adventure Day that includes fishing, games, and outdoor activities. While the Super Hunt focuses on the 6-to-17 age range, events such as a late-summer gator hunt aim to keep those who’ve aged out, involved in the community they’ve built.

The Super Hunt has changed and adapted over the years, but the initial concept—private landowners hosting children with disabilities and their families for a weekend each fall—remains the foundation.

“It’s been successful. Over 85 percent of the state of Mississippi is privately owned, as far as hunting and outdoor access,” Mumbower says, and engaging private landowners introduces the children and their families to communities deeply steeped in the rewards of outdoor life and pursuits. “They’re already passionate about it, they’re already conservationists, they’re already giving back in a lot of different arenas, but now it allows them to show and teach some of these kids and their families, who may or may not have other opportunities to get in the outdoors.” It’s a chance, too, for families to catch a break from normal routines and hit the refresh button.

Landowners Missy and Jay Shackelford, of Benton, move to their deer camp, River Bend Lodge in Pickens every year when September rolls around. They are now approaching their fourth year as Super Hunt participants, and do it for one simple reason: “The children,” says Jay. “It will bring you down to earth.”

“It humbles everybody,” says Missy, “to remain grateful and thankful.” Their five children—four sons plus daughters-in-law and their daughter and her fiancé—get involved, too, as guides, helping with meals, filming, and photographing the fun as they host three to four children each fall. “Every deer, no matter how small it is, is a trophy and we treat it that way,” Jay says. They stay in contact with the kids, too. “They become part of your life.”

Last year’s Super Hunt was an eye-opener for Belzoni landowner and first-time participant Jessica Sandifer, who runs Easymoney Hunt Club and related businesses with her husband, Jimmy. Their four daughters also enjoy the sport. “It’s unlike anything I’ve ever seen,” Sandifer says, with rewards as meaningful on the landowners’ sides as they are for the children. “Tears welled up in my eyes at just the sight of how excited these kids are.”

“Honestly, I think I gained so much—just to be super thankful for what we take for granted every day,” Sandifer says. Seeing the passion for the outdoors in these children’s faces, “It touched my girls’ lives as well.”

“The whole goal of our organization is to get children with disabilities in the outdoors and just allow them to be kids, allow them to have fun,” whether they want to harvest an animal, experience deer camp camaraderie, or just play outdoors, Mumbower says.

“We don’t limit kids, based on disability. As long as they have medical forms and the proper documentation from the doctors, we allow them to participate.” Now in its sixteenth year, “I would say we’ve seen just about every type of disability that you can think of,” Mumbower says, including kids who use wheelchairs, those with cerebral palsy or spina bifida, children with hearing or vision limitations, kids with autism or ADHD, and those battling heart disease or cancer. 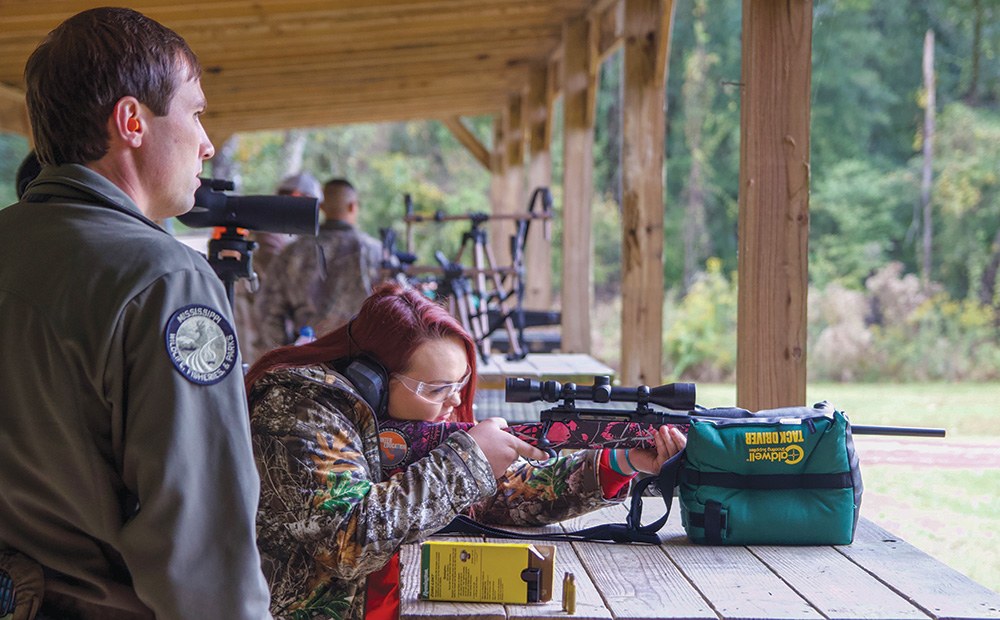 Each Super Hunt starts at MDWFP’s Turcotte facility, where the youth shoot on a shooting range with an MDWFP officer, ensuring gun safety and ability. Adaptive pieces—eye scopes, holding mechanisms, and other equipment—acquired over the years help overcome challenges, for youth to be more successful in their hunts.

The Mississippi Delta is a key player in the Super Hunt. “One thing that’s been neat is that we’ve got clubs that even seasoned hunters have never laid foot on, because they’re privately owned in the Delta and all over the place,” Mumbower says. “Some of them, especially the more renowned ones, are in the Delta. Because the landowners are so generous and so willing, they have donated their property to host kids for the weekend.” Some landowners build relationships with their young guests that extend beyond the Super Hunt. Some become event sponsors.

“Over the years, we’ve had clubs on the Mississippi River, in the Delta as far over as Vicksburg and Yazoo City, all the way up to Greenwood, Greenville, Belzoni, and Bolivar County,” Mumbower says. “We have landowners all over the Delta that have donated their time, their energy, their effort to be a part of our events and our organization. That’s not just for the Super Hunt, where the deer hunting is good. That’s for our alligator hunts, where they have access to water.”

Southern Outdoors Unlimited’s ability to give children with disabilities and their families such a full and rich experience is a key point of pride. That extends from the first get-together, through a weekend of hunting or fishing fun, and to the Sunday morning worship service and share time. As many as 350 to 400 people come to that final gathering each year, to hear the kids talk about their experiences.

“It shows you how much we can brighten their year,” Mumbower says. “If we can just alleviate a little bit of the normal wear and tear and the normal stress and strain of their daily lives, with one event or with a weekend—that, to me, is what makes the difference.”

For more information on the Super Hunt, visit southernoutdoorsunlimited.org.