This series of contests combines fierce competition, family fun, and the best barbecue around

Saucy fun. Good-natured ribbing. A competition so keen you can taste it.

“We saw an opportunity with the number of sanctioned barbecue contests in the Mississippi Delta,” says Elise Jenkins, one of Delta BBQ Battle’s founders along with Rob Marshall and John Paul Gates.

Jenkins, a retired Delta State marketing professor, has been involved with sanctioned barbecue events since the 1980s. Gates has a long history as a competitor who transitioned to the organizing end. Marshall, formerly employed at Bolivar Medical Center, got his first taste of barbecue competition fun as a judge. “He was really the visionary for what we’re doing,” Jenkins says of Marshall. “He said, ‘You’ve got such a great thing going on here. How do we make it bigger and better?’”

They put their heads, and ties to various events, together. “We thought that by pulling them together, we could really target outside teams to come to the Delta, get more tourism, and get more people coming to town for economic impact for these events,” Jenkins says.

Rather than a single event working on its own to attract traveling teams of barbecue competitors, this combined pull boosted the incentive for teams to compete in more or even all events, racking up points for an even more lucrative prize, above and beyond that at the individual contests. Major sponsors provided seed money, and the sponsors list has grown in the years since.

To be eligible, teams compete in at least three of these four Delta contests sanctioned by the Memphis BBQ Network (MBN). Events announce their winners in two divisions: championship (whole hog, pulled pork, and pork ribs categories) and patio (pulled pork, pork ribs, and pork loin categories). The Delta BBQ Battle takes a team’s highest score in any meat category and adds those together. “The more they cook, the better their odds are of getting better scores,” Jenkins says. The team with the highest cumulative sum from three highest scores is considered the Delta BBQ Battle winner.

Having four events also takes a bit of the burden off teams. If they have to miss one event, they’re still in the battle. “We don’t want to make it impossible to do,” Jenkins says. “It is geared, really, to attract traveling teams to come to the Delta. That has been the key to it, with the idea that they need to be incentivized to make that travel.”

Delta BBQ Battle’s success has also inspired other states to go similar routes, stitching together area contests for a bigger pull and profile. “That tells us what we’re doing is working,” Jenkins says. Creating a model for regions that improves participation helps the sport but also economically helps the contest locations. Teams and judges come in, stay overnight, buy gas and food, and more. “It can have a strong impact.”

This year’s new partnership with Melissa Cookston, dubbed “the winningest woman in barbecue,” and her BBQ Allstars super store doubles the Delta BBQ Battle’s prize money, amping up the lure and attracting more teams to participate. “She’s originally from the Mississippi Delta,” Jenkins says of Ruleville-born Cookston,” so she’s got a real soft spot in her heart for what we’re doing.”

Barbecue competition is a highly social family activity filled with hard-nosed competitors vying for a win but who’d also give another team the shirt off their backs, Jenkins says. “They love what they do.

“It is an expensive hobby, without a doubt,” she says. “When you’ve got people doing this—and they’re so passionate about it—having an organization such as the Memphis BBQ Network gives them the confidence that when they go to compete, it’s a fair competition, that judges are trained and certified, that they get every opportunity to win. It’s rewarding to do that for them.”

As well as veteran competitors, the field is seeing a new crop of young cooks honing their skills on the hog. Cookston is doing much to sow the seeds, with her start of the nonprofit World Junior BBQ League, dedicated to bringing the sport to teens.

“They think they’re learning to cook barbecue, but what they learn is a lot of life skills through competition barbecue. … I guess it’s a way of giving back because barbecue’s been very good to me,” Cookston says. The league is quite diverse, with kids from all walks of life, she says, including at-risk youth, special needs teens, and children of barbecue team members who are doctors and lawyers. “They all come together and cook together and turn in highly competitive barbecue.” All the while, they’re learning responsibility, accountability, and teamwork. The significant purse—last year’s was twenty thousand dollars—goes to the organization they’re cooking with.

The Delta BBQ Battle has a strong, loyal following among teams that like the Delta contests, Jenkins says. “They make it a priority. Teams can go anywhere from Galax, Virginia, to Cleveland, Mississippi—there are lots of options for them. But we do feel that quite a few are partial to us. Of course, we call it that Delta hospitality. We treat them like royalty.”

In competition barbecue, teams cook all that meat for judges, not the public. But with the aroma of smoking meat hanging heavy over a competition, it’s vital that someone satisfies the public appetite too. Jenkins says that in her work with MBN for new events, “We look for opportunities where the general public can get access to barbecue,” whether from a vendor or a people’s choice component. “It’s just criminal for people to come to an event and smell all that great barbecue, but you can’t eat it,” Jenkins says. “Events do work to at least provide some avenue through vendors.”

The cement of friendship provides the drive for The Great Pig in the Sky, a team of twenty-five- to thirty-year-olds who were Delta BBQ Battle champs in 2021. “We were elated!” says Nick Woolfolk of Senatobia. “It’s a culmination of all the hard work we put in that year,” made even sweeter by getting the prize at Octoberfest in Cleveland, the first contest they ever cooked in. They have now also gained Royal Oak Charcoal as a sponsor becoming part of Team Royal Oak 2022.

The group of a dozen guys who met through Delta roots and college has now dispersed into different communities and different fields, including agriculture, construction, finance, and more. “Quite the melting pot,” says Woolfolk, who works for the nonprofit Operation BBQ Relief, which feeds first responders and communities affected by natural disasters. He and team co-founders Blake Gibson and Thomas Coopwood came up with the idea at the men’s annual cold weather campout on the Mississippi River. “There was always barbecue there. I had the smokers, and we’re always trying to find a way to link back up —ways to come together, hang out, and have a good time, and that’s what barbecue is. We took it and ran with it and have done pretty well.”

He sees it, too, as a way to bring to bring more young life into the sport. “We’re trying to light the fire back up and motivate more people to do it.”

Family ties are behind the two-member Rolling Bones team, with husband-wife Wade and Susan Boyette of Rosedale at the helm. They won the patio division in 2019 and have since advanced to championship level. He’s the cook, and she’s the extensive note-keeper, shopper, and clean-up crew. “My husband loves it, and I love my husband,” Susan Boyette says by phone from Atoka BBQ Fest in Tennessee, where they were settling in for another competition. “We only go to the glamorous places,” she kids. “Last weekend, we were in Tylertown.”

Winning is appealing in the sport, she says, but good friendships are a real bonus. “We do it for fun,” Wade says, chuckling as he adds, “It’s really not fun unless you win something.” With the people in the sport, “It’s like a real family,” with a feeling not of competing against each other but for the judges. Leftovers are another bonus. “We have a lot of friends waiting for it when we get home.”

Friendship also provides the foundation for No Count Q, a Greenwood-based crew that hunts together, does business together, and now cooks up barbecue fun together too. “It’s just kind of an odd hobby,” says Matt Freeland who, like Woolfolk, is a second-generation barbecue competitor. He and his buddies ate it up from the start. “There’s great camaraderie. All the teams you cook against—you wind up being really good friends with a lot of different people.”

Once they debuted at Que on the Yazoo and did well, No Count Q discovered there are barbecue competitions all over the place. “Next thing you know, we have a sixteen-foot trailer with counters, kitchen space, cookers,” Freeland says. Three years later, it’s a twenty-two-foot enclosed trailer with almost a full kitchen and air-conditioning, with sponsors Royal Oak Charcoal and Triple 9 Swine.

Despite their name—three of them forgot and were no-shows at a breakfast meeting early on, and organizer Justin Braswell dubbed them “a bunch of no count you-know-whats,” Freeland reports—they’ve become a force to reckon with at competitions. The Delta BBQ Battle regulars have won in both the patio and championship divisions.

“Anybody can do it,” Freeland says, putting out a call to all the guys sitting at home with a penchant for barbecue and praise from friends. “If all your friends tell you your barbecue is the best, come out and play. There are a lot of good teams still in the patio division, and they need some competition!” 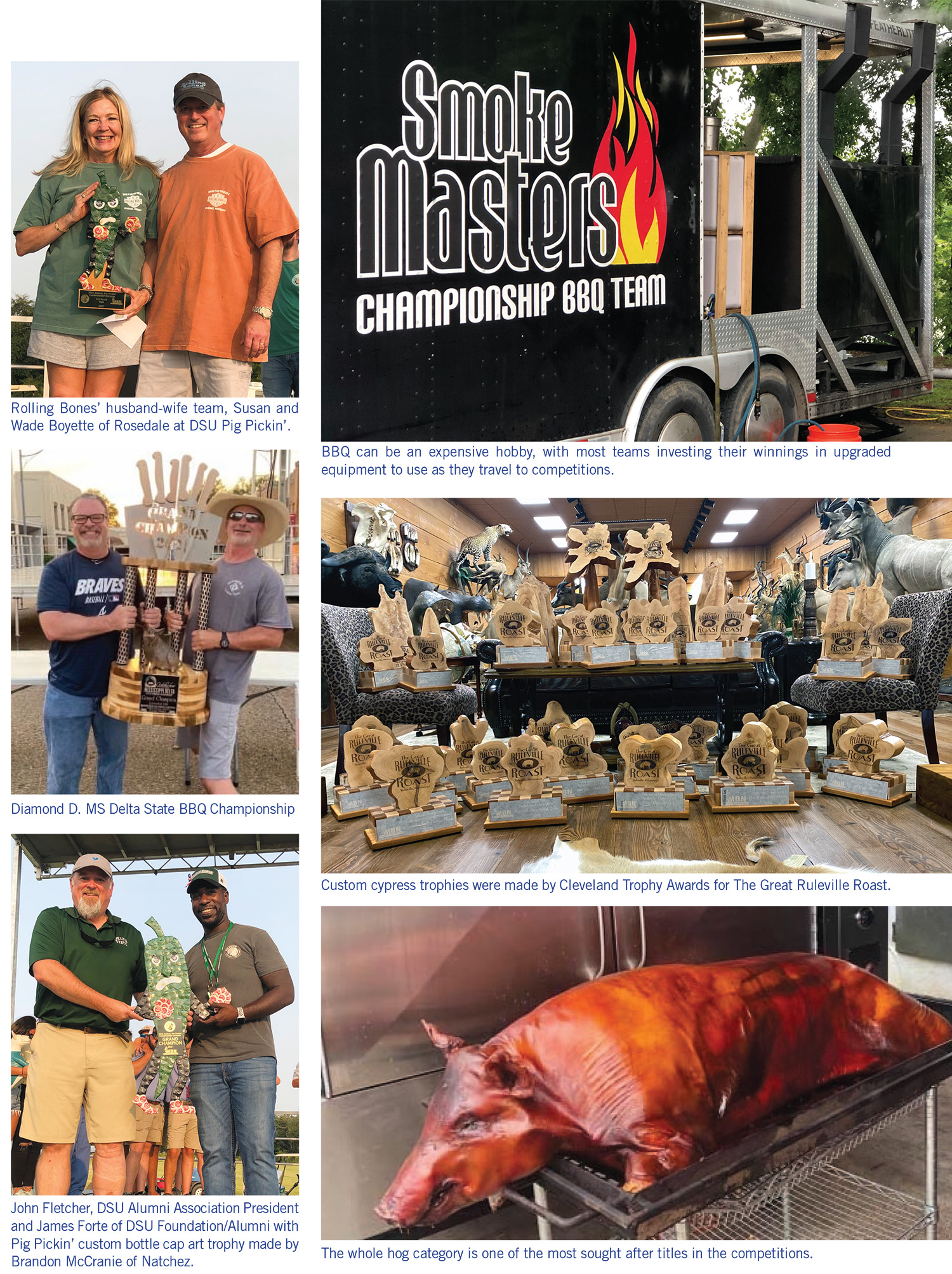