Three Delta families trek over to the hills for a week of fun, family, food and a generous dose of red dirt sprinkled in for good measure! 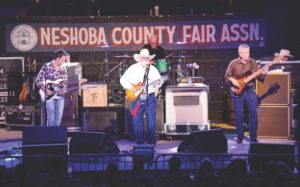 If your idea of paradise consists of visiting, grazing, politicking and a little sweating, you better get yourself over to the Neshoba County Fair in late July. For many, it’s a conundrum of sorts—how can more red dirt than you ever did see, high temps and a bunch of politicians be worth spending those vacation days, after all? But like many things around these parts, you can’t knock it till you try it. Until you’ve tasted hospitality as sweet as the first bite of a July watermelon in one-hundred- degree heat among friends and family, you just don’t know what you’re missing.
The Neshoba County Fairgrounds are located just outside of Philadelphia, Mississippi, nestled in the rolling red clay hills that are uniquely Neshoba. Inside the fairgrounds, on a sprawling plot of sixty acres, you’ll find colorful rows of eclectic cabins that come to life in late summer. It’s here that friends catch up, families reunite and tradition lives on.
The first fair was held in 1889 and was known as the Coldwater Fair. In 1889, a private corporation was organized and dubbed the Neshoba County Stock and Agricultural Fair Association, and the new fairgrounds were opened. Early on, the fair brought visitors from miles around, and families began camping there for the entirety of the festivities. A pavilion and hotel were soon built, and makeshift cabins began popping up. The shady oaks that surround Founder’s Square were planted in 1898. In 1914, the race track was constructed, and electricity made its way to the fairgrounds in 1939. During World War II, the fair went on hiatus and reopened in 1946, much to the delight of the public. Cabins began stacking up as patronage grew, and neighborhoods such as “Happy Hollow” were established throughout the grounds. What started out as a simple two- day meeting of local farmers and their families is now the much loved eight-day Giant House Party, where people file into over six hundred cabins and over two hundred RVs. Fair cabins are a coveted slice of real estate, many of which never go “on the market” but are instead passed down from generation to generation.
The long-standing tradition of political speeches began in 1896 when Governor Anslem J. McLaurin took the stage. Since then, the Neshoba County Fair has solidified its place as one of the top political forums for local, state and national politicians. In fact, Ronald Reagan kicked off his 1980 campaign for president from the middle of Neshoba County at the fair, where he remarked, “I think you all know without my saying it that Nancy and I have never seen anything like this because there isn’t anything like this any place on earth.” 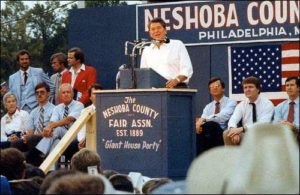 Many pack up and head to Philadelphia from the Delta to spend late July in this special place, including Sharon and Mike Boler of Greenwood. Mike, who grew up in nearby Union, used to come to the fair with his father, Buford, packing a sack lunch before the family built a cabin. As their family has grown, the fair has continued to be a beloved family tradition.
“Not only have I come for the last thirty-five years, but I’ve stayed the whole entire week,” laughs Sharon. Her mother- in-law Margean Boler is a big part of Sharon’s fair memories. “When my kids were little, it was like a vacation for me. Mike’s mother would cook everything and take care of my kids.” When Margean passed away suddenly, Sharon took the fair reigns. “The first year without her, I went and realized I didn’t appreciate all she did nearly enough. I cried the whole way home because I was so tired.” Sharon made sure she was more prepared the next year and has settled into a rhythm, creating memories for her children and grandchildren. 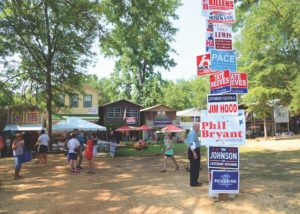 At the fair, keeping cool is nothing short of an art form. For the Bolers, a fifty-year-old air-conditioning unit keeps their cabin ice cold, but in the heat of the day, Pop Ice popsicles are the ticket.
Visiting and rocking on the porch are punctuated by quick pop-ins to the cabin for a deep breath of cold air conditioning.
Food has always taken center stage at the Neshoba County Fair, where you’re sure to be beckoned into any cabin for a bite. After nibbles on sausages and funnel cakes along the midway, home cooking takes the cake. Many family fair traditions revolve around food. “Every Friday night, we have chicken spaghetti, French bread, salad and of course several desserts,” says Sharon. “On Saturday, we have every single fresh veggie you can name with pulled pork or ribs and fried chicken.”
With a long family fair history, Clarksdale native Cyndi Larson’s experience is chock full of tradition at cabin twelve on 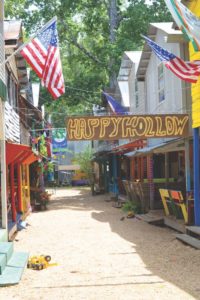 Founder’s Square. Her great grandfather, George Harrison, donated the land to establish the fairgrounds when it was incorporated. In fact, the twenty acres he donated is where the race track sits today. Years ago her grandparents, Neva and Jim Vance, (Neva was the only daughter of George Harrison and his second wife Maria) gave half of cabin twelve to his brother, Bruce who now has cabin thirteen. So, family is all around. When it comes to food, the Larsons enjoy a big pot of red beans and rice on Sunday and homemade ice cream. “My brother-in-law brings his hand-crank ice cream maker,” she says. They grill burgers and munch on smoked turkey, ham and chicken throughout the week.
Cleveland resident Emily Havens says that her memories of the fair begin with her stepfather Charley Therrell, the longstanding announcer of the beloved horse races. “My family started going to the fair in 1979 before my mom married Charley,” remembers Emily. “We started going as friends, and now we are officially family.” Emily’s favorite traditions include her stepbrother and stepsister Todd Therrell and Mary Ann Martin. “Each couple that goes has a day to cook, and we cook all three meals for that day,” she says. “We clean the cabin, and it works out so great because we get to relax the rest of the days.” At the Therrell cabin, you can find nearly forty people betting on both the beauty pageant and the horse races or getting together for a big fish fry. “One of my favorite things is when my stepsister Mary Ann makes her mom Nancy’s famous nine-layer lemon cake and fried chicken,” says Emily. “We just really love to eat and visit with each other out on the porch.” The Therrells’ tradition of late- night food is a big hit. “We have wings, sausage balls and rotel. We always have nacho time right after the horse races.”
While the food and the fun are always top contenders, it’s really the fellowship that everyone keeps coming back for. “I love visiting with the people that I only see once a year,” says Sharon. “They’re our lifelong friends, and we get to sit and catch up all week long.”