Treks of Greatness, Shades of Grandeur

Treks of Greatness, Shades of Grandeur
Guided Duck Hunting in the Delta

“Forever and ever, amen” is the oft-time response when a city slicker asks a hardened old duck hunter how long ducks have been coming to the Delta. Or, as legendary Fighting Bayou duck master Skipper Jernigan relates, “since man’s memory runneth not to the contrary.” If it’s winter, there are going to be ducks in the Delta. The greatest waterfowl flyway on the North American continent is the Mississippi Flyway, carrying a staggering amount of the migrating waterfowl each year from their breeding grounds in the upper regions of North America to the areas of Louisiana along the Gulf Coast. And one of the highest concentrations of ducks and geese funnel each year into the Arkansas and Mississippi Deltas along the Mississippi River. No greater masses of waterfowl come through an area than our Mississippi Delta. Following the ingrained paths of the Mississippi River and its floodways, the historically flooded bottomland hardwood timber, grass fields and sandbars have offered up a smorgasbord of wild grass seeds, acorns, pecans and tubers that is the historic diet of overwintering waterfowl. In other words, in the Delta today, “if you got food, you got ducks.” 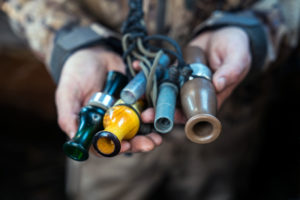 Deep in the south Delta, in Washington County, only a few miles off the current path of the Mississippi River is the old Swan Lake bed. A shallow lake, it served as the drainage sump for a large part of the neighboring Delta. Surrounded by virgin cypress and dense hardwood forests, the lake would rise during high water times and then drain out, allowing hundreds of acres of grass flats to emerge loaded up with tons and tons of seed. Swan Lake, like many of the oxbow lakes created by the meandering river, would literally fill up with ducks each winter. As the unforgettable Duck Doctor, the late Bubba Tollison, often said, regarding the annual migrating ducks’ return to imprinted resting and feeding grounds, “Their eyeballs would peel back as they fell out of the sky heading straight into the water.” It stands to reason that in 1893, this is where the first incorporated hunting club in the state of Mississippi was established, Swan Lake Hunting Club. Today, the Yazoo National Wildlife Refuge encompasses thirteen thousand acres of the old Swan Lake bed and surrounding fields and forests.

South Washington County still holds an abundance of the lakes and wetlands that have been home to overwintering waterfowl since long before the first white men established residence in the area. Along the banks of Lake Washington in close proximity to the old Swan Lake bed stands Linden Plantation. The property, which was the first presidential land grant and homesite in Washington County, was originally purchased in the early 1820s by Frederick Turnbull of Kentucky, who settled there building a two-story log cabin and gave the plantation its name. The second owner was Christopher Hampton of South Carolina, brother to Civil War Calvary General Wade Hampton. Christopher Hampton built the first formal home on the location. In 1898, the property was purchased by P. L. Mann. Mann eventually razed the Hampton home in the early 1900s and began construction on the Greek Revival home which still stands today.

Linden Plantation is currently occupied by the fifth generation of the Mann family, Cameron, Whitney, Banks, and Linden Dinkins.  With the goal of creating a sustainable business model from the abundant recreational opportunities found on his family’s land and throughout the Mississippi Delta they called home, Cameron founded Esperanza Outdoors in 1997.

Over the years, the Dinkinses have added to their property and made improvements to the land in order to create an ideal habitat for the wildlife that reside in and visit the Delta. Esperanza Outdoors has now progressed from a hunting leases and club format to a full-service destination for wing shooting and shooting sports based at Linden Plantation.

In 2008, chef and avid sportsman Stewart Robinson joined the Esperanza team when he moved back to Mississippi after several years living out of state. He and Dinkins began hunting, fishing, cooking, and exploring together and realized they shared not only a love of the outdoors and entertaining but also a vision to offer what they refer to as a Mississippi Delta “boutique” duck hunting experience. In the fall of 2013, Robinson became a full partner when the Dinkinses decided to transition to a premier guide service, offering a multi-faceted guided hunting experience that encompasses duck, goose, dove, and teal hunting, fishing, and a multi-station, state-of-the-art sporting clays range.

“Whitney and I knew that it was time to transform, but we didn’t want to make the change unless Stewart wanted to be a partner as well,” says Dinkins. “The three of us work hard to convey our vision of the essence of hunting in the Delta. It’s about the whole experience of friends and family enjoying the bounty of nature, great food and fellowship, and the ambiance of this truly magical setting.”

And magical it is. Upon arriving, there is no better way for guests of Esperanza to toast the upcoming hunt than 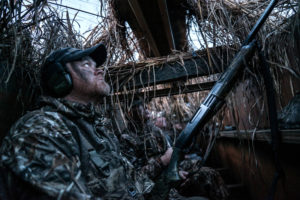 from the front veranda of the Big House. There, surrounded by massive columns and nearly two-hundred-year-old magnolia trees, planted by Turnbull himself, they watch as the sun slowly sinks into the cypresses of Lake Washington. During their stay, they are treated to an immersive, two-to-three day foray into the depths of the Mississippi Delta. Hunters dine at Doe’s Eat Place, gather around the one-hundred-plus year old fire pit to share the day’s stories—along with a nightcap—and are treated to Robinson’s culinary creations, which are gathered and harvested from the surrounding fields, woods, and water.

“Ultimately, our desire is to make each guest a part of the Esperanza family, always at home…and anxious to return,” says Whitney Dinkins. “Warmth and hospitality are the keys to a welcomed stay. I love people and hope to immediately put them at ease and make them feel like part of our family.”

In addition to her work with Esperanza throughout the year, Whitney also runs an event and rental business on the property hosting weddings, dinners, workshops, and retreats.

Needless to say, the Dinkinses and Robinson know how to put on a weekend of unparalleled opulence for their guests as they are immersed in some of the best duck and goose hunting available in the Mississippi Delta. But for Robinson it’s much more. “I want to shatter people’s preconceptions about what the Delta is and who our people are,” he says. “Our goal is certainly to give our clients the most productive hunting experience possible, but we don’t want to send them home with just a cooler filled with meat. We want to baptize them into the Delta. The food, stories, wildlife, and characters of this place are what make it special to us, and that is what we hope to convey to others.” At the turn of the last century, little of the Mississippi Delta had been cleared for farming, but that was rapidly changing. Chugging out of Memphis daily was a small train that carried freight, supplies, and a few passengers deep into the wilds of Desoto, Tunica, and Coahoma Counties. The “Limb Dodger” carried cotton and timber back out of the swamps to the timber mills and cotton shipping points in Memphis. The track ran right alongside Beaver Dam Lake, an old oxbow of the Mississippi River. Forever, this lake has been a prime spot for overwintering waterfowl that migrated each year by the untold thousands, if not millions. Onboard the Limb Dodger in the wintertime would often be Memphis sportsmen who had formed a small club on Beaver Dam Lake to partake of all there was to offer in the cypress brakes, grass flats, adjoining fence rowed fields full of quail, and nearby river sandbars loaded with geese. Most likely on that train, accompanied by his father and other older men, was a young Nash Buckingham who later would become possibly the greatest outdoor sporting writer of all times. Word had been sent by long-standing and loved caretaker Horace Miller that “da ducks is down.” One could rest assured that Horace’s wife, Aunt Molly, was busy in the kitchen getting ready to feed the sporting guests. There would certainly be “goose stew…served right royally and attended by outriders of ‘cracklin’ bread’ and flanked by a man-at-arms in the form of a saucily flavored brown gravy. I recall a side dish of broiled teal and some country puddin’ with ginger pour-over, but merely mention that in passing.” And the next morning in Aunt Molly’s kitchen guests were served, “…coffee, poached eggs, butter-broiled country ham, and beaten biscuits.” 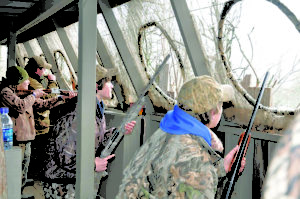 But it was the ducks and geese that drew the gentlemen to Beaver Dam. Mallards, pintails, gadwalls, teal, widgeon, and wood ducks by the sky-blackening-thousands descended on the flooded grass flats, willow thickets, and cypress brakes that were loaded with floating duckweed, acorns, pecans, and grass seeds.

And that has not changed much today. The old Beaver Dam Ducking Club has been resurrected in the new Beaver Dam Hunting Services. Shooting from historic and legendary blind locations in towering cypress trees and buckbrush sloughs, along with newly added flooded grain fields, owners Mike and his son Lamar Boyd offer nostalgic memory-laden hunts to serious sportsmen from all over the country. Inspired by a friend’s prompting, those first hunts were originally booked for a few morning hunts to mostly local clients. Now, years later, Beaver Dam Hunting Services offers opportunities to serious waterfowl hunters from all across North America. The Boyds have now been providing professionally guided duck hunts since 1982 in what is regarded as one of the premiere waterfowl destinations in North Mississippi and the nation. Journal, Petersen’s Hunting, and Ducks Unlimited Magazine, as well as national media exposure. Nowhere else can you hunt ducks and shoot from the same blinds and areas that were immortalized over a century ago by Nash Buckingham. Oil up your old Parker or Fox side-by-side and get a box of the new tungsten shells that won’t damage those glorious old barrels as you draw a close bead on one of a flock of feet-down mallards. You just might hear that resounding “baaaruuuumph” of Buckingham’s legendary Bo Whoop echoing off through the cypress. If you are serious about duck hunting, you just may need to be able to sit back on a cold winter’s evening in front of an ember-laden fire, glass in hand, and say, “I really do think I heard it.”