From distant lands to the nearby Delta, photographer Rory Doyle captures the wide and vibrant world.

The first time I met Rory Doyle, we had been sent together on a magazine assignment to document the life of Biloxi’s 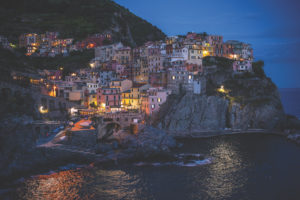 fishermen. On a cold night on the Mississippi Sound, I watched Rory climb into the rigging of a shrimp trawler—a precarious position, but in his estimation the best way to capture a fisherman hauling in his net. We got back to our hotel past midnight, yet before sunrise he was slipping out to catch the water under the soft morning light. There, in the harbor, I watched as he sweet-talked a set of immigrant Vietnamese shrimpers—who spoke limited English and were clearly wary—into posing for a photograph.
For me, it was an instructive trip. Here was someone who refused to settle, who never turned off: who believed that in the coming moment, or around the next corner, a deeper image might appear. Here was someone who would never stop looking, never stop thinking of where to go next. On our drive back north to the Delta, we frequently pulled to the side of the road so that Rory could capture some eye-catching detail. I mentioned this to his wife, Marisol, and she just rolled her eyes. Sometimes travel with Rory can be slow.
That’s a small price, though, for the result: a cascade of images that remind you that the world is full of brightness and beauty and joy. His typical photograph pulls you close into a small moment of human drama—often the eyes of the subject, crackling with life, are the focal point—before releasing you back into the world around the subject, whether a wide-open landscape or a crumbling neighborhood or a dimly lit bar. It makes you want to go there, where the photo was taken—or go somewhere because the world, it’s clear, is large and filled with life. 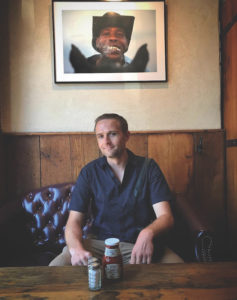 Rory, who grew up in the woods of West Newfield, Maine, was always curious about the world beyond the small town. But his parents were not travelers. “We never left the Northeast,” he says; even friends’ trips to Disney World seemed exotic. As a senior at St. Michael’s, a small liberal-arts college in Vermont, Rory had the chance to study in New Zealand. Once he landed in Auckland, he realized he was already halfway across the globe—a place he might never get to again—so he set school aside for six months, plane-hopping from Thailand to Egypt to Sweden and beyond.
Rory was majoring in journalism. A lifelong athlete, he figured he’d become a sportswriter—but did not actually love the writing part. In 2008, after he returned to St. Michael’s, a photojournalism elective changed that path. As Rory transitioned from simple point-and-shoot techniques to the complex decision-making of fully manual photography, he found himself fascinated by the possibilities: the way a slow shutter speed could bring blur and motion to an image or how adjusting the lens’s aperture could sharpen or dampen the background details. “It opened a whole new world for me in terms of telling stories,” Rory says.
He became immediately ambitious; while fellow students focused their sports-photography projects on campus teams, he went out and found a local women’s roller derby team. For his final assignment, he collected images of undocumented workers on a nearby dairy farm. The same curiosity that had sent him spiraling around the globe had found its perfect outlet. Photography was travel: a means of exploring the world.
In 2009, a year after graduating, Rory landed in the Mississippi Delta—not as a photographer but as an education student at 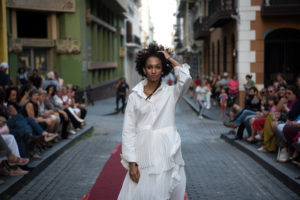 Delta State University. He was contemplating a career in outdoor recreation. But when he took a job with the Bolivar Commercial, he began to shoot more and more photos. He found the landscape and culture—so different from his hometown in Maine—to be as fascinating as any foreign locale.
Rory says he was raw as a photographer—even now, that one elective remains his only formal training—but as he kept shooting, the sharpness of his vision was apparent. In 2013, he caught the attention of DSU’s marketing department, who hired him full time. By the end of the year, he began to break into local magazines and then, before long, into freelance work for regional Southern publications and then national outlets like The Atlantic. In the meantime, Rory kept traveling. Each year, he and Marisol save money and spend a few weeks abroad; they’ve now wandered ten different countries together, from Peru to France.
There is an inherent shortcoming to this constant wandering: it makes it difficult to dig deeply into any single subject. Even within the Delta, Rory found himself running from scene to scene, paycheck to paycheck. “Everything I was doing was for somebody else,” he explains. “Very quick, in-and-out assignments. I was neglecting my personal work, which was also neglecting my growth as a photographer.” 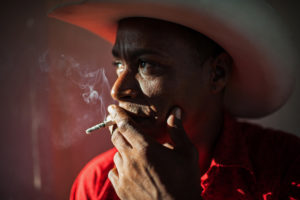 Then, in 2016, during Cleveland’s annual Christmas parade, Rory noticed an interesting scene: a half dozen African American men, wrapped up in long field coats, cowboy hats atop their heads, riding on horseback. Earlier in his career, he might have simply snapped a photo and moved on. This time, though, Rory did something different: he approached the men and chatted with them. They invited him to a “Black Heritage” rodeo a few weeks later in Greenville, and that rodeo opened an unexpected door: Rory began to befriend the Delta’s tight-knit community of black cowboys and cowgirls, joining them on trail rides, at horse shows, even after-hours at local nightclubs.
“I’ve found a side of the Delta that I’d never known, and maybe never would have known if not for this project,” Rory says, which, he notes, helps fulfill his desire to explore, even when he’s near home. (It’s also given a new focus to his international wandering; he now finds himself connecting with various horse-riding cultures. His photographs of Cuban cowboys, for example, caught the attention of the late Anthony Bourdain, which led to a photo essay published by CNN.) 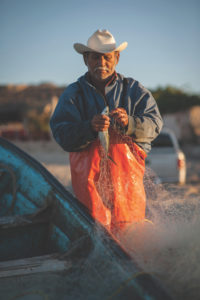 In early 2018, best-selling journalist Sebastian Junger came across the Delta cowboys project on Instagram. Junger, who owns the Half King, a bar and photography gallery in New York City, invited Rory to exhibit his photos. Soon other exhibitions followed, in New York and in Mississippi. Six months later, Doyle won the prestigious Eye Em photojournalism award, which launched an explosion of coverage. Write-ups about the project have now appeared in the Washington Post, the British Journal of Photography, and ABC News, among countless other publications. As new freelance commissions poured in, Rory left his job with DSU to become a full-time independent photographer.
The cowboys project will almost certainly become, eventually, a book—though just when that will happen is hard to say. As the cowboys have shifted from subjects to friends, he has realized there will not be a moment when his interest in their lives will end. In the meantime, of course, his eyes will be wandering still—across the Delta and all around the world.  “My eyes are always on the lookout for something,” he says. “That’s hard for me to stop.”