SOMETHING COOL IS HAPPENING IN VICKSBURG.

This town has always boasted beautifully preserved antebellum homes, Civil War sites and views of riverboats on the mighty Mississippi. But there is also a new vibrancy with its downtown art galleries, boutiques and restaurants not seen in recent years. Thanks to a few creative and energetic entrepreneurs, there are charming living spaces and hip new places to eat and drink attracting locals and tourists alike. We recently spent a couple of days exploring, eating and shopping our way through Vicksburg. Here are our insider tips for your next trip!

When you’re visiting one of the most historic cities in the nation, you may as well book accommodations to match. Vicksburg is loaded with charming antebellum (or at least a mere century old) bed and breakfasts. Here are three that caught our eye. 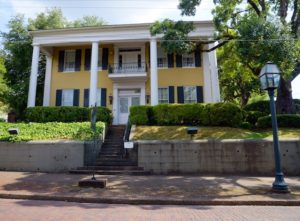 Anchuca (1010 First East Street) is located in the heart of Vicksburg’s historic district. Named for the Choctaw word for “happy home,” the home’s exterior is a mixture of wood and brick. Built in stages by local politician J. W. Mauldin, it was begun around 1830 as a two-story wood-frame cottage; however, the overall Greek revival-style structure seen today was completed in the late 1840s. It was from Anchuca’s balcony that Jefferson Davis gave what is believed by many historians to be his last public address to the people of Vicksburg. In addition to the daily breakfast and a complimentary tour for guests, Anchuca boasts a full- service restaurant and bar, featuring specialty drinks and dishes such as café shrimp and grits, surf and turf and incredible desserts. Sunday brunch is also a favorite of locals and guests alike. 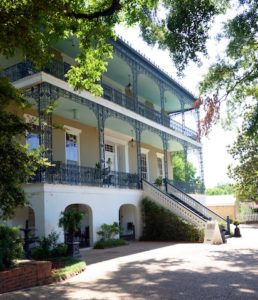 Duff Green (1114 First East Street) was built by local cotton broker Duff Green shortly before the war in 1856. Considered to be one of the finest examples of Palladian architecture in the state, it escaped destruction during and after the Civil War by serving as a hospital for both Confederate and Union soldiers who were treated upstairs in an attempt to discourage any more cannon fire on the structure. Located across the street from historic Christ Episcopal Church, it was later used as an Episcopal boys’ orphanage and as the Salvation Army. With 15- 1/2 foot ceilings, its rooms are located within the main house, and every guest enjoys a well-worth-the-calories three-course seated breakfast. 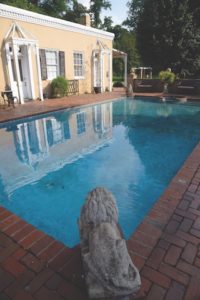 the Greek Revival mansion in 1840 and married his bride, who was only sixteen at the time, two years later. While on their year-long European honeymoon, the Kleins bought many of the furnishings which are still found at Cedar Grove, such as the Italian marble fireplaces, French empire gasoliers, and towering gold-leaf mirrors. The home survived the war mainly because it had been used as a Union hospital; a Union cannonball is still lodged in the wall, giving evidence of the heavy bombardment it endured. Visitors will enjoy its central location near many historic sites as well as the beautiful pool and grounds and a delicious Southern breakfast during their stay.

Well, the possiblities are almost endless. And whatever you crave, you will find. Craft pizza? Check. Southern standbys? Check. Sophisticated entrees, homemade desserts and signature burgers? Check, check and check! 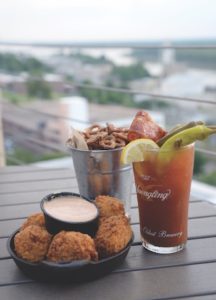 Late afternoon cocktails and appetizers at 10 South Rooftop Bar & Grill (1301 Washington Street, 10th floor) at the top of the iconic Trustmark building are always a good idea. We chose the crawfish balls with comeback sauce with a cold beer as we enjoyed the stunning view of the waterways below. The bloody mary looked so delicious that we ordered one of those too— definitely one of the best around with the interesting addition of candied bacon to the standard complements. Next trip—catfish tacos!

And for dinner, you can’t go wrong with Roca’s Restaurant and Bar (1306 Washington Street) or Rusty’s Riverfront Grill (901 Washington Street) for a great downtown meal. Rusty’s, located only a block from the riverfront murals, is known for their signature fried green tomatoes, which are topped with hollandaise sauce and crab meat. But we were also blown away by the fried asparagus with crawfish sauce. Delish.

At Roca’s, Chef Jay Parmegiani offers an interesting menu accented with unique entrees and sauces (Quail with a cider reduction anyone?) that have a European flare. To finish, try the sweet potato and white chocolate bread pudding with bourbon glaze, or cap off the evening with a selection from their offering of small batch bourbons.

This brings us to one of downtown’s most recent additions. Cottonwood Publichouse (1311 Washington Street) has brought 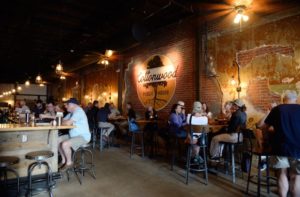 craft beer, craft pizza and craft cocktails to Vicksburg. In a recently renovated historic building in the heart of downtown, they are brewing more than just beer—there’s a cool vibe in the air along with great food and live music that is bringing in locals and tourists alike just to sit and enjoy. Put this on your list for a fun- with-friends Saturday night!

Cottonwood Craft Beer & Cocktails — We tried the Mississippi Queen (a blonde ale) and the Southern Pecan (a brown ale) and the Shakedown Street—an instant favorite.

These are some of the offerings downtown, but don’t forget Walnut Hills (1214 Adams Street) located in a historic home built in 1880 and offering classic Southern round-table cuisine and fabulous homemade desserts that just might put you in a coma. In fact, don’t even try to choose—we recommend ordering several and passing them around the table. The Anthony (127 Country Club Drive), located at the Vicksburg Country Club, is open to the public. Recently renovated it offers casual dining with interesting options such as sausage gravy dip with buttermilk biscuit chips. Main Street Market (902 Cherry Street) is owned and operated by husband and wife duo Sally and Chris Fink. You will find it in an 1840s structure in one of Vicksburg’s oldest, most historic neighborhoods, making it a great lunch stop when you’re on a walking tour or seeing the sights.Their scratch-made kitchen produces homemade biscuits, fresh pies made from family recipes, fresh takes on New Orleans favorites and much more. For something a little more off-the-beaten-path, try The Tomato Place (3229 Highway 61 South) complete with a farmer’s market, great lunches and a variety of freshly made smoothies!

For a day of shopping and museum hopping head to Washington Street. This brick-paved historic downtown thoroughfare is thriving with boutiques, gift and antique shops, art galleries and museums.

Don’t miss one of the most unique combos around—Highway 61 Coffee House and the Attic Gallery. Stop in for your caffeine fix then head upstairs to the Attic Gallery on the second floor, which boasts an impressive collection of Southern folk art, fine art, pottery, glass, jewelry and plenty of other funky treasures. Next door, settle in for a while at Lorelei Books, one of the premier independently owned book stores in the state. More than just a bookstore, owner Kelle Barfield also helps foster a love of literature and learning in the community by offering it as a gathering space for classes, readings and book clubs.

The H. C. Porter Gallery is also right down the street with the nationally recognized artist’s original paintings, serigraphs, photographs and prints on display–and for an extended stay downtown ask about the upstairs lofts for rent.

Nearby museums include the impressive Jesse Brent Lower MS River Museum, full of Mississippi River history, a river flood model and the decommissioned towboat Mississippi available to tour. The Biedenharn Coca-Cola Museum, great for a quick walk-through, is quirky, nostalgic and sure to delight the kids. A few blocks away, the Old Court House Museum (1008 Cherry Street) built in 1858, is Vicksburg’s most historic structure and houses thousands of artifacts including Confederate flags, including one that was never surrendered, the tie worn by Jefferson Davis at his inauguration as Confederate President, antebellum clothing and Indian and pioneer implements.

Now, for the shopping. There are antique, gift and home decor shops such as The Dragonfly—great for candles, scents and jewelry—and Peterson’s, which sells Mississippi-made products, gifts, art, pottery and has a large selection of children’s toys, Willingham’s ladies clothing and accessories and Sassafras with it’s extensive inventory for bridal registry and table decor, entertaining and home accents. Cinnamon Tree is another great shop packed with trendy gifts, pillows, pottery, gifts for every occasion and perhaps best of all—homemade fudge in a variety of flavors. And tucked away around the corner is Blush & Bashful Boutique, a chic little boutique with the latest summer styles and accessories.

★ Many of the downtown restaurants, attractions and stores in Vicksburg are on or near Washington Street.

Tours and sightseeing. This town is not only full of Mississippi’s history; it is truly an American treasure. Be sure to spend some time driving through the Vicksburg National Military Park (3201 Clay Street). The monuments, each telling their tale of valor, also bear one of the most extensive and valuable collections of public art in the nation. While there, don’t miss the 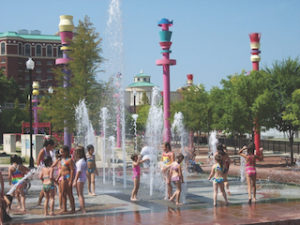 fascinating USS Cairo Gunboat and Museum which displays the doomed (but painstakingly preserved and restored) ironclad struck by underwater torpedoes in 1862. Visit one of the historic churches, such as Christ Episcopal (1115 Main Street) or the Church of the Holy Trinity (900 South Street) built in 1869, which boasts six original Tiffany stained-glass windows honoring those who died on both sides of the war. And don’t forget a stroll down Levee Street where you can watch the riverboats dock, see the Vicksburg Riverfront Murals (painted on the Mississippi river flood walls), which depict the city’s history, and tour the Old Depot Museum. Across the street you’ll find the Catfish Row Children’s Art Park with play areas and a splash fountain. While there plan a guided tour of the homes, architecture and historic sites (there’s even a Haunted Vicksburg Tour!) are available. For those who may want to wander at their own pace, there are self- guided walking tours signified by maps and signs around town.