Woman of the Wild

“From the warm window sill the endless fields glowed like a hearth in firelight, and Laura, looking out…felt what an arriver in a land feels—that slow hard pounding in the breast.”
– Eudora Welty, Delta Wedding 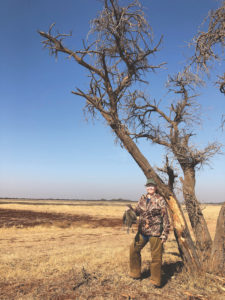 For those of us who love to travel and to hunt, Betsy Schonberger of Wingshooters Worldwide lives a dream life. It’s easy to imagine her with the anticipation of Laura McRaven, Eudora Welty’s beloved character from Delta Wedding, coming up from Jackson into the Delta, except instead of a wedding, she is on her way to scout duck-laden wetlands.

A world-travelling huntress, Schonberger is not always in the Delta, though sometimes she is. Still, how many “new lands” must she have had instigate that “slow hard pounding in the breast.” And, for how many clients since she started her business in Argentina in 2006 has she provided the same.

If you ask her who is the primary market for her family of guides and outfitters, she quickly rattles off three words, “Hunters not shooters.” And leaves it at that, to settle as bird shot peppering the dust.

Though quickly uttered, it is actually a nuanced description, immediately literal, yet an elegant metaphor anyone who’s spent much time around hunters will recognize at once. To shoot is a singular act. To hunt is a multi-varied system of activities. Though we try, year after year, to make it less so, hunting is work. It means educating oneself in wildlife biology. It means scouting territory, hauling gear and equipment, training dogs and horses, caring for them, telling them goodbye-sometimes too soon. It means paying close attention to the enveloping ecosystem that supports the wealth of biodiversity that in turns supports the game we cherish. It means active participation in conservation programs to conserve habitat and preserve the culture of hunting. Oftentimes, it means working with and through differences with friends and acquaintances as members of clubs or hunting parties of happenstance. Hunting is not just a labor of the body, but of the mind and spirit, as well.

Shooters show up and pull a trigger. 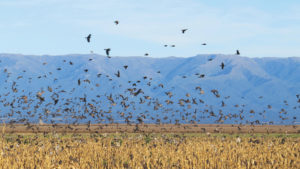 But that’s not all. Perhaps more deeply, hunters are tireless in their pursuit. They are single-minded of purpose when afield. To hunt is to look. To seek, even. Hunters are persistent practitioners of our most primordial predilections. When a hunter of worth connects on a shot that offers their prey a quick and humane passing, it is not taken lightly, as that moment is the product of thought and work and something akin to prayer. When this hunter tells a hunting story, it is not the tale of a braggart.

When shooters tell stories they—well— we all know what shooters shoot.

Of course, a person isn’t born such an astute observer of the human scene. No, the kind of wisdom that can recognize so much and say it with such brevity must be earned. Schonberger has spent a lifetime outdoors and around the men who make their lives outside, where their perspectives are pigmented by physical, mental and spiritual taxation. From her earliest days traipsing around her grandfather’s ranch near Hazlehurst to later years following him afield begging for a shotgun with which to hunt quail, she’s known hers is a life best lived outside, among all the struggles and blessings the natural world offers. This is a life few people choose for themselves, especially if they are women. But Schonberger knows what moves her soul, the 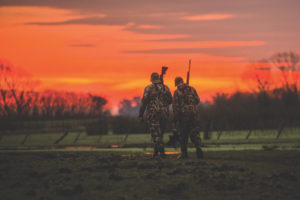 rewards of remaining true to her calling, “If you want to know about creation,” she said, “wherever you are, go outside. It’s all happening right there. All the time. Life, death, birth, resurrection.”

In 2006, Schonberger must have felt somewhat resurrected when her life’s purpose suddenly appeared in her crosshairs. She was living in Argentina, doing advertising and marketing work, but like any good hunter simultaneously paying attention, seeking. One day a chance encounter changed everything. Had she been anyone else having not grown up a ranch girl and wingshooter, she might have missed it.

“I was at the airport and some Southerners were standing off to the side wearing camouflage,” she said. “Nobody wore camo down there then. I walked over and asked them what they were doing and they said they had paid to come down and dove hunt the Cordoba region where I lived. After that, I started in earnest trying to find a property to buy, but it was really hard to find land with a clear title.” 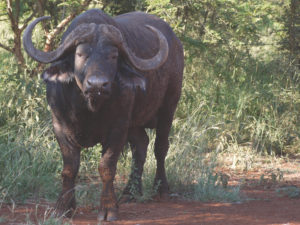 Finally, her break came while looking for a place to ride horses (another passion carried forward from childhood). She sent an email to a landowner asking if she could come ride some time. He replied, but didn’t even mention the horses. He was interested in her American English and wanted her to come out and translate for him. She did and while there she told him of her desire to buy a property and open a dove-hunting outfit. He offered her a partnership on the spot.

They worked together for several years before parting company over a disagreement regarding quality of service. She is adamant that all of her outfitters maintain impeccable service. Once they dissolved the partnership, she began contacting the abundance of other outfitters who had contacted her throughout the years asking for help. During this process, Schonberger developed a great idea: She didn’t have to be a partner in a single business, but could provide essential services to several.

“I saw I could develop an entire family of outfitters and guide services that met my standards for quality. After some time I realized they could be the best outfitters for any game anywhere in the world.”

Once she saw this vast opportunity before her, she only needed to do the work of making sure the businesses met her standards.

“Usually I’ll go and experience, from a customer standpoint, everything they offer. I’ll contact a couple of my longtime clients with more discriminating tastes and take them with me.” 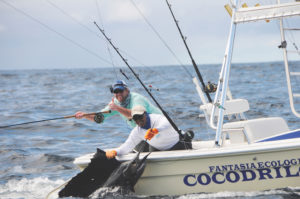 If they aren’t happy, it’s an immediate no. Presently Wingshooters Worldwide offers top-tier hunting and fishing trips. Some of these include dove hunts in Argentina, cape buffalo hunts in South Africa, black marlin fishing in Costa Rica, and casting to steelhead trout on Canada’s Skeena River (for a full listing visit wingshootersworldwide.com).

They even offer eco-tours for families. This is a recent addition after Schonberger noticed a lot of times wives want to come, but don’t want to hunt.

“Many women want to come on these trips, but don’t want to go spend days out in the wild somewhere like South Africa. What I see is they want to come if they can experience the wider culture of the location away from the hunting aspect. So we’ve started including that, too.”

But this begged the question, how many women are there who do what Schonberger does—and how is she treated in such a male- dominated industry?

Schonberger says she is following in a long line of fearless females, such as Jeri Booth of the Detail Company, whom she regards as a pioneer.

“There have been some legendary women who do what I do. In times past and when I first started. I obviously don’t know everyone in the industry, but I’m pretty sure I may be the only woman left doing what I do.” She adds, “As far as the clients go, my job is to make everyone happy. I take care of everything from their travel arrangements to import/export legalities and the complex web of international gun regulations. I don’t think of myself as anything but good at my job.”

All of this is part of what makes her special. Well, this and the fact that she takes the time to develop deep and meaningful relationships with her clients.

“I’m with them in the field. I have a lot of return clientele who have been hunting with me for years. I just returned from South Africa with a man who is eighty one,” she noted. “In January I’m taking a group that includes an eighty-seven-year-old man on a driven hunt in Ireland. So, the clients are friends, and I enjoy great relationships with them. That’s not to say that I’ve never had to sit one down and straighten him out, but that’s been extremely rare.” 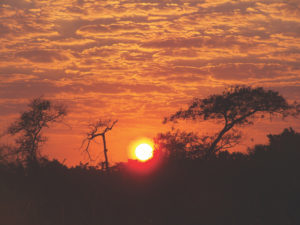 She is willing to do small things other businesses don’t, like take small groups, or even arrange for a party of one to take the trip of a lifetime. Regardless what country she is in, or where on the globe she is heading, it’s that extra effort, that perfect attention to detail that makes her unique to her customers.

And yet, for her rarified status as an international woman of the wild, Schonberger knows where her heart is most at peace. She talks at length about her family and friends who call the Delta home. One of her sisters is a Methodist pastor newly appointed to a pair of churches in Greenville. For several years now Schonberger has been taking clients on duck hunts with Cameron Dinkens at Linden Plantation, where she’s met author and longtime Delta Magazine contributor, Hank Burdine. As a special treat she takes her groups to Doe’s or the Delta Supper Club. While she has roots in the Delta that go back generations and new friends and business associates through Wingshooters Worldwide, it’s not the people alone who make this region, of all the regions in the world, special to her. 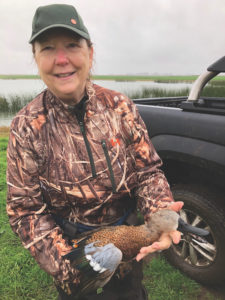 She and her minister sister were talking recently about Schonberger’s church attendance. Much like an Emily Dickinson poem you may remember from the ninth grade, “Some keep the Sabbath going to Church-/ I keep it, staying at Home-/ With a Bobolink for a Chorister-/ And an Orchard for a Dome-… So instead of getting to Heaven, at last-/ I’m going, all along,” she insists that though she can’t be in the pew every Sunday she lives her life in awe of creation and its architect. Schonberger lives among the most remote and beautiful places on the planet, but nowhere is this feeling of astonishment stronger than in the Delta. Like Laura McRaven she approaches the Delta from Jackson up Highway 49 to Yazoo City. The wonder in Schonberger’s voice is like that of Welty’s character from long ago, “On that drive whenever I drop out of the hills into those wide-open spaces, I feel like I am home. It is my church.”

2 thoughts on “Woman of the Wild”