A lot has happened in the lives of Kristen and Bennett Crow in the last four years, most notably the arrival of Sam, 4, Lula, 2, and Cate, 15 months. Add to this moving three times in four years. It’s hard to imagine, but true. Every house served its purpose, but the Crow’s rapidly growing family brought with it new needs to be met. The ironic thing is that as the family grew they did the opposite of what one might expect—they downsized. “Our last house was more spacious and we loved it, but the truth is it was so much work for me to keep up. This house is much easier,” says Kristen. “And,” she laughs, “every time we move, the house gets older!

Built in 1939, the Crows’ home is a gem nestled in Cleveland’s historic district. They knew that with three bedrooms, a den, living room and dining room the space and arrangement of rooms would work well for them. But there were still quite a few changes that needed to be made when they moved in. 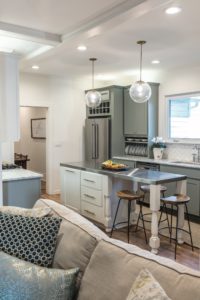 The biggest project they tackled was completely gutting the kitchen, which they did with the help of Clarksdale interior designer Rachel Cirilli. Her design included changing the layout from an L-shape to a classic galley style and adding anew center island. Marble and stainless countertops, new appliances and modern light fixtures supplied the finishing touches in the new space. The adjacent laundry room was also expanded into a multi-use space that has a built-in desk and bar area.

“This house is really so efficient for us,” says Kristen, noting that it feels much larger than its two thousand square feet.  She explains, “I love that the kids have a play area in the den, but we still have space for the adults when we have company.”

Kristen notes that the original pine floors are one of her favorite features of the house. Along with high ceilings and French doors, they lend this Craftsman-style cottage its unmistakable charm. In contrast, modern touches, particularly the light fixtures and other accessories, really stand out, bringing a unique touch to every room. 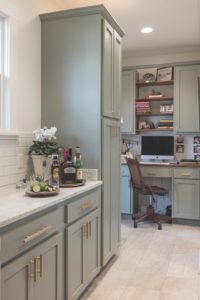 A collector of McCartys pottery, Kristen’s favorite pieces are placed throughout the house. Another prized possession is Bennett’s grandmother’s record player which they restored and use often. “Our kids love it too—we have had many a dance party!” says Kristen.

Happily settled, at least for a while, the Crows are enjoying their new old home, giving it new life as they update it to meet the needs of their young family.